On Christmas of last year, the singer Alicia Keys, wearing red bauble earrings, posted a video on Instagram, in which one of her sons instructed her not to scream when she saw her present. But Ms. Keys danced and shrieked anyway, so much was her joy upon seeing a sleek 52-inch rectangular Mirror mounted on her wall.

When turned on, the otherwise unassuming-looking bit of home décor morphs — like “Through the Looking Glass” gone athleisure — into a gym portal, offering screenings of some 70 live fitness classes per week, including boxing, dance cardio, high intensity interval training (H.I.I.T.) and yoga.

Users are face-to-face with the instructor; you can see your entire body as well as a shrunken-down image of the instructor’s. The device is controlled by an app, so as to avoid fingerprints on the reflection. All the usual caveats about data collection apply.

“I love this can you tell??” Ms. Keys captioned the post.

Ms. Keys is one of the most vocal in a wave of high-profile early adopters of the Mirror, which first came on the market in September. Reese Witherspoon also recently posted a video to Instagram: using the device, which retails for $1,495, to take a boxing class.

Ellen DeGeneres referred to hers as the “Magic Mirror” on her television show. Allison Williams works out with hers daily, according to her publicist, and Gwyneth Paltrow and Jennifer Aniston ordered theirs after seeing it at friends’ houses. Kate Hudson talked about trying one in People magazine.

Last week, a revered comic actress in her 60s was spotted in Mirror’s pop-up shop in the Flatiron district of Manhattan, buying two, though her publicist said “her name should not be used in association with it.”

Almost every boutique gym has its celebrity followers, but not since SoulCycle’s heyday five to seven years ago, when Lady Gaga, Lena Dunham and Oprah Winfrey threw their birthday parties at the spinning studio and the designer Betsey Johnson wore SoulCycle leggings to the opening of a CFDA exhibit, has one fitness method attracted so many famous practitioners. (Lady Gaga bought a Mirror for her parents for Christmas.)

In this case, it seems to reflect, as it were, their need for both privacy and — in the age of the selfie — carefully maintained social-media display.

Brynn Putnam, Mirror’s inventor and a Harvard-educated former New York City Ballet dancer, said: “I think I knew we built something special, but I don’t think I expected this.”

Ms. Putnam, 35, does Google those who have bought the Mirror, just as she used to with first-time clients at Refine Method, the eight-year-old boutique gym she founded. But often she only finds out whom the purchase is for when the company arrives at the customer’s home to install it, or when her company receives questions about putting the device on a very high-security Wi-Fi network.

“That’s how we found out about Leslie Mann and Judd Apatow,” Ms. Putnam said, referring to the firewall issue. Her company, whose offices are in the NoMad neighborhood of New York and has raised $38 million in funding from investors including Spark Capital (Foursquare, Warby Parker) and First Round Capital (Uber, Blue Apron), is selling $1 million of the 1.4-inch-thick Mirrors per month, she said.

There are buyers in all 50 states, with California, perhaps not surprisingly, the top market. Luxury hotels have begun installing Mirrors in suites and, in the case of the Mark, its $75,000-per-night penthouse. (Not all customers are 1-percenters, Ms. Putnam stressed; roughly 20 percent request financing.)

Ms. Putnam is refreshingly new to the courting of celebrity, and speaks of influencers (she gave Mirrors to Sara and Erin Foster, who have a lot of famous friends) and “public clips” (those Instagram videos) with the delight and faint ostentation of someone who has just learned a foreign language.

Previously, she had little patience for workout fads. A decade ago, as an instructor at various barre method gyms, she was scolded for substituting in moves, such as lunges, that she considered more effective.

She created Refine (which has a devoted, though not boldfaced, following) after a year spent grilling sports scientists and professional athletes’ trainers about what got results. Mike Boyle, whose clients include N.F.L. players and other elite athletes, told her she was right about the lunges.

At the time, the only studio Ms. Putnam could afford was a 500-square-foot basement on the Upper West Side that she had to give back to the church that owned it every Sunday for services. She designed a cable tower made of weighted sailing pulleys and tracks for strength exercises that could easily be taken down and remounted. (Her husband, Lowell Putnam, a founder and the C.E.O. of Quovo, a financial technology company, had grown up sailing.)

But in the spring of 2016, newly pregnant, Ms. Putnam found herself in the strange position of being the owner of a gym with an optimized-down-to-the-minute workout she could not face doing. 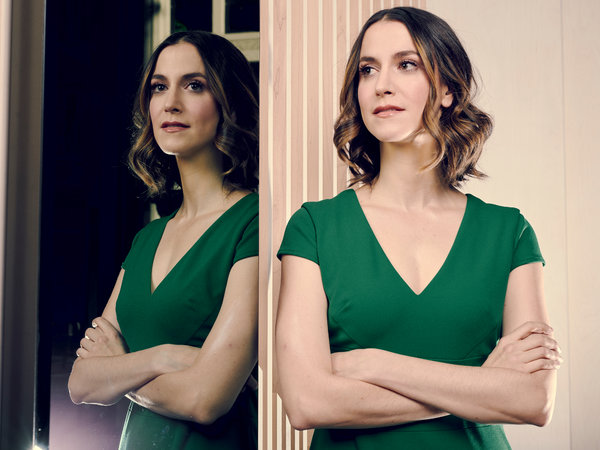 She didn’t like treadmills or exercise bikes enough to buy one, and when she tried to stream workouts, she couldn’t figure out where to set up her computer or phone so she could see it while moving.

Around that time, she also conducted a Refine members survey about improvements she had implemented, including new class times, trainers and custom-made equipment. Turned out, simple mirrors she’d put in at the last minute were by far Refiners’ favorite change: They liked the instant feedback.

“I almost missed it,” Ms. Putnam said. “Mirrors were something I took for granted because my entire career I worked out in front of them.”

She spoke sitting on the sofa at the company’s Flatiron store, sipping a hot chocolate after six hours of interviewing potential Mirror hires. Occasionally, she stretched a leg above her in a perfect line, as if executing a tendu. On her feet were gray Allbirds, the only shoe she can tolerate after the Chanel ballet flats she bought (on a stylist’s advice) to “look like an adult” while promoting Mirror made her lose her toenails.

“It’s the greatest irony of the world,” she said with a laugh. “One of the biggest things I was excited about when I stopped dancing was that I could keep my toenails going forward.”

But What Does It Cost?

Mirror’s required $39 per-month subscription, on top of the outlay for the equipment, offers four levels of classes, absolute beginner to expert, and all can be modified according to injury or pregnancy (each instructor films substitute moves, which pop up on screen according to user preferences.) There is also a library of hundreds of on-demand classes, so in theory this cost can be amortized.

Lindsey Bradley, an actress who lives in the Greenpoint section of Brooklyn, says the workouts are as good a sweat as the boutique studios she used to attend as a ClassPass user. And as a bonus, she no longer has to stand on a chair to get a view of her outfit in a cabinet mirror.

“I legit use it as my full-length mirror,” Ms. Bradley said. “You would never in a thousand years know it was a piece of workout equipment.” Ms. Bradley used to own an elliptical machine; it now functions as her mother-in-law’s clothing rack, she said.

Next up for Mirror is personal training, which will start at $40 per session; the device has a camera, and yes, a lens cap, lest you be concerned about privacy issues. Also sports prep for children, because the Mirror is averaging 2.2 users per household, according to company figures.

Later will come treadmill and spin workouts, like those offered by Peloton, a six-year-old company now valued at $4 billion that was recently mocked in a merciless Twitter thread.

The Mirror company has ambitious plans for the device to be users’ third screen, after their phone and computer, with the capacity for everything from photo organizing to chat. Currently, users can shop through the Mirror, buying fitness gear and other instructor favorites.

Ms. Putnam years ago turned up to a Physique 57 instructor audition wearing a T-shirt that hung to her knees and black track pants with a yellow stripe she borrowed from her mother (she still got the job), and so to handle this part of the business she hired Karla Welch, a celebrity stylist. Ms. Welch, Mirror’s creative director, has also helped spread the word to her clients: Olivia Wilde and Karlie Kloss are Mirror users.

One challenge for Ms. Welch: No trainers can wear black, because it doesn’t show up against the background. For now, she is enjoying buying “trippy acid wash tights” and leopard-print sneakers.

“When I go to SoulCycle, I like my instructor dressing crazy,” Ms. Welch said.

To the disappointment of Mirror’s sales staff, Ms. Welch recently decreed that APL sneakers, not the $300 Yeezy Boosts she originally selected, should be worn in the store. Ms. Putnam surprised them with the Yeezys anyway.