The Road to This Wedding Was Paved With Theft, Lies, Tears, Other Marriages — and Forgiveness

The lessons from the love story of Irene Sibaja and Hal Karp are many, but here are some of the more obvious: The old dating adage “right person, wrong time” is real; forgiveness is a gift; sharing your darkest moments can have a positive outcome; and looking for an ex online can sometimes be a good idea.

Mr. Karp and Ms. Sibaja first met in 1993. Mr. Karp, who graduated from Southern Methodist University, had grown up in Denver and Dallas, the oldest of three children of David Karp and Renee Karp. Ms. Sibaja, from Houston, was the third of four children of Jane Root and the late Dr. Elihu Root. Ms. Sibaja graduated from Rice University and has an M.B.A. from Harvard, and was working in Dallas for Bain & Company in strategy consulting.

Mr. Karp was then a freelance writer and editor. He had organized an event, through a young adults’ group at Temple Emanu-El in Dallas, to update a playground he had designed a few years earlier for children with H.I.V. Ms. Sibaja went to volunteer. 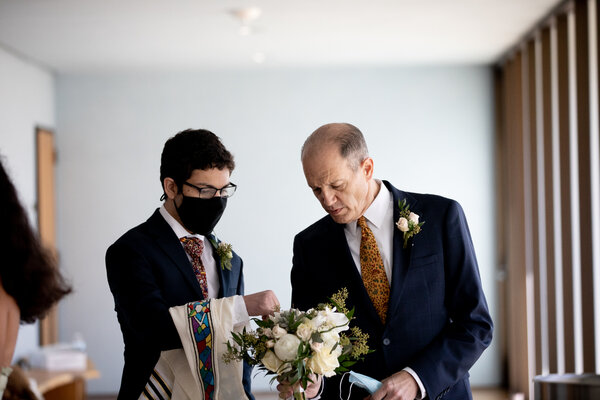 “She’s smart as all get-out and a go-getter, and is all-in whatever she’s into,” Mr. Karp said. “And she just lights up a room. Her laugh can be heard from a block away.”

They fell for each other fast and began dating. In Ms. Sibaja, Mr. Karp saw a young woman who had her act together, in the way he aspired to. She saw a young man with a huge heart who wanted to make a difference in the world.

But Ms. Sibaja, then 26, learned that Mr. Karp had another side, too. Mr. Karp, then 29, was addicted to both alcohol and drugs; cocaine was his drug of choice. While she was unaware of his addictions, they manifested in extreme mood swings.

She had planned a one-year extended stay in Costa Rica to teach English before they began dating. Before she left, she lent him a credit card to finance a volunteer project. She had the statements sent to him so he could make the payments.

They tried to make things work long distance but it was difficult. Mr. Karp visited her. “I knew he was struggling,” she said, “but I didn’t know the real reason.”

After he returned from visiting her, she called him from Costa Rica and ended the relationship by phone.

He was angry, especially at her, and was broke. Without her knowledge, he had obtained a second credit card in her name, and then a third. He charged more than $10,000.

“You think you’ll pay it back and she’ll never find out,” he said. “As an addict, you rationalize the craziest things.”

But Ms. Sibaja learned what he had done. She called from Costa Rica and confronted him by phone. She hung up on him, and then didn’t answer when he called her back multiple times.

That night, he said he sat on the couch in the dark in his apartment, finally realizing the misery he had wrought. He could repay the bank for the credit card charges, but violating the trust of the woman he loved? He could never make up for that.

“I was done,” he said. “There was this moment of surrender.”

It was August 1994. He has been clean and sober since.

While bank officials were deciding how to handle Mr. Karp’s case, he began making regular payments on the charges and even provided his address and name of his employer. The bank ultimately decided not to press charges. His lawyer told him it was a miracle he didn’t serve time.

He wanted to make amends to Ms. Sibaja right away, but the people guiding him made a suggestion: “You’ve already ruined this person’s life once; the best gift you can give her is to leave her alone.”

After dating Mr. Karp, therapy helped Ms. Sibaja learn to trust again. She married in 1998 and had two children. Mr. Karp married, too, in 1999, and had a son.

Each wondered about the other as the years passed.

“I thought you don’t get that kind of love more than once in your life,” Ms. Sibaja said. “It’s not that I didn’t have love for my ex-husband, because I did, but it was just different.”

Mr. Karp, too, said that Ms. Sibaja had set the highest bar possible; consciously or unconsciously, the women he met could never measure up to her.

They each admitted to occasionally searching the other online. This was how, in 2018, now both divorced, Ms. Sibaja found Mr. Karp on Facebook. He had posted a link to “Unorthodox,” a Jewish podcast hosted by Tablet Magazine. For Yom Kippur, the Jewish holiday of atonement, the podcast has an annual apology episode, which that year featured Mr. Karp telling a story about how he was able to repair his relationship with his brother.

Mr. Karp, who was the assistant producer and then producer of a storytelling event in Dallas called “Oral Fixation,” was used to encouraging participants to share their most vulnerable moments; now it was his turn. His story was about how, before he met Ms. Sibaja, he allowed his brother to be arrested in his stead when they got into a physical fight, fueled by his addiction. He told about how he was able to make amends by being his brother’s caregiver after he needed sudden surgery. He also mentioned there were others he had badly hurt.

Ms. Sibaja knew he was talking about her. “You could just hear in his voice how sorry he was,” Ms. Sibaja said. “The courage it took to do that, it’s just so brave.”

The fact that Ms. Sibaja might hear it never occurred to Mr. Karp. He said he hoped that his story could give hope to someone else who may be struggling.

“God says ‘here’s the deal,’ but then, later, I realize, ‘no, the deal is really much bigger than you think it is,’” he said.

It was vulnerably sharing his darkest moments that prompted the woman he never stopped loving to reach out.

Ms. Sibaja wrote to him on Facebook, saying she was glad he was in a much better place. She also gave a brief update about herself: she was divorced, living in Arkansas with her two children and their dog.

Mr. Karp was stunned. If she ever came to Dallas, he wrote, he would like to make amends to her, too.

Two months later, in November, 2018, they met at Café Brazil in Dallas, a place they used to frequent when they dated. The only thing on Mr. Karp’s mind was setting things right. “I was not the boyfriend you deserved,” he told her. “You deserved the best, not me.”

But that wasn’t enough for Ms. Sibaja. She never thought she’d have this opportunity to ask him something she had wondered about all these years.

“What was I to you?” she asked him in that moment. “Did I mean anything to you? You were the love of my life.”

It was as if Mr. Karp had a “cry” button inside him, he said, and she had just pushed it, hard. He sobbed. “It just broke me to think she had thought all these years that she didn’t matter to me when she was all that mattered,” he said.

Realizing just how much pain he had caused her had been the wake-up call he needed back in 1994 to quit using and drinking for good, he told her. His path to sobriety had started that next morning.

They hugged when parting. Ms. Sibaja returned to her car and just sat there. The tears kept flowing. “Thank you for seeing me,” she messaged him from her car. “I’m not entirely sure how to navigate the reconnect.”

They figured it out, quickly. They began texting and talking from that day on.

Mr. Karp didn’t believe in long-distance relationships. But he also didn’t believe he was worthy of a second chance with Ms. Sibaja. Yet she had opened the door. They both said it was as if their hearts had come home, when they didn’t know there was such a thing.

Ms. Sibaja feared her mother’s reaction. She didn’t tell her, at first, and Ms. Root was far from pleased when she found out. She then received a letter from Mr. Karp, asking if they could talk. Her first question: Why hadn’t he tried to make amends earlier? Ms. Root has a close friend who was also in recovery, who confirmed his explanation about the culture discouraging it.

“Hal is one of the sweetest, most caring people I’ve ever met,” Ms. Root said, “and I really knew how much he loved her, and that he never stopped, despite what he had done to her.”

A year later, Mr. Karp wanted to propose. Given the podcast’s role in reuniting them, Mr. Karp felt it should be involved as well. The hosts invited the couple to be guests at a live appearance they were doing in Cincinnati. “While we loved Hal’s story of suffering and redemption, the last thing we expected was that broadcasting it would help him refind love,” said Mark Oppenheimer, the host of “Unorthodox.” The proposal came without a live audience, though.

A day after their engagement, in November 2019, Ms. Sibaja told the live audience, “Forgiveness is a gift, and it’s a choice. In the years in between, we’ve done so much work on ourselves and were in a place that this could happen. And not only that, but my mother who I was petrified of all people to tell, they now have the sweetest relationship, too.”

In February 2020, Mr. Karp moved to Rogers, Ark., where the couple now live and Ms. Sibaja is a vice president of client service for Nielsen, the marketing research company. Mr. Karp, 57, has his own business helping teens prepare for college entrance exams and essay writing.

Plans for a May 2020 wedding were postponed because of the coronavirus pandemic. They then chose Ms. Sibaja’s 54th birthday, Dec. 6.

They married 27 years after they met, in a small, socially distanced ceremony at Temple Emanu-El in Dallas, by its senior rabbi, David Stern, with the senior rabbi of Temple Shalom Dallas, Andrew Paley, participating. Each rabbi stood masked on either side of the huppah, while their 30 or so guests sat spaced apart and masked.

In his vows, Mr. Karp reminded Ms. Sibaja how when they first reconnected, she had said his apology was a gift she never thought she would receive in this lifetime.

“I was the one who got the gift I never thought I’d receive in this lifetime,” he said. “Your love.”

Attire Ms. Sibaja wore yellow Converse Chuck Taylor sneakers chosen by her daughter, Tova, who wore matching ones, with her Allison Webb wedding gown. Ms. Sibaja’s late father was known as a natty dresser and to honor him, Mr. Karp, his son, Eli, and Ms. Sibaja’s son, Samuel, wore ties that had belonged to Dr. Root.

The Podcast The three hosts of “Unorthodox” and its producer were given the honor of reading four of the seven blessings traditionally recited at a Jewish wedding. They did so from their homes on Zoom, projected onto screens in the sanctuary.

The Reception With Covid-19 cases rising, nearly everyone participated virtually, while the couple, their children and a few close friends enjoyed a celebratory meal at the Kimpton Pittman Hotel. Guests were sent celebration boxes filled with a half bottle of prosecco, miniature champagne flutes, wedding cookies, a personalized bottle of hand sanitizer and accessories for photo-booth-style selfies at home.