When Eric Coudray chuckles, his arms cross over his midsection and his whole body undulates joyfully; the movement is unexpected, considering the perpetual, deep stillness that his job requires.

To call him simply a watchmaker would be too narrow a term: A watchmaker assembles the parts of a watch. “Eric is what we call a constructor,” said Alexandre Ghotbi, head of watches for continental Europe and the Middle East at Phillips, “he can develop and create a movement and then build it.”

For more than three decades, Mr. Coudray has worked behind the scenes for, and partnered with, some of the most well-respected and exclusive watch brands, including Jaeger-LeCoultre, MB&F and Purnell. He pioneered the multiaxis tourbillon, designing Jaeger-LeCoultre’s spherical dual-axis Master Gyrotourbillon in 2004. Then, in 2019, he created the vertically oriented Spherion triple-axis tourbillon for MB&F’s Legacy Machine Thunderdome and a double Spherion duo of triple-axis tourbillons for Purnell’s Escape II.

“Actually, I don’t like watches,” a grinning, bare-wristed Mr. Coudray, 55, said during a Zoom call from his home, a decommissioned windmill in Foncine-le-Haut, in eastern France. “I love the mechanics and working on the mechanics, but the watch itself as an object, it doesn’t really touch me.” 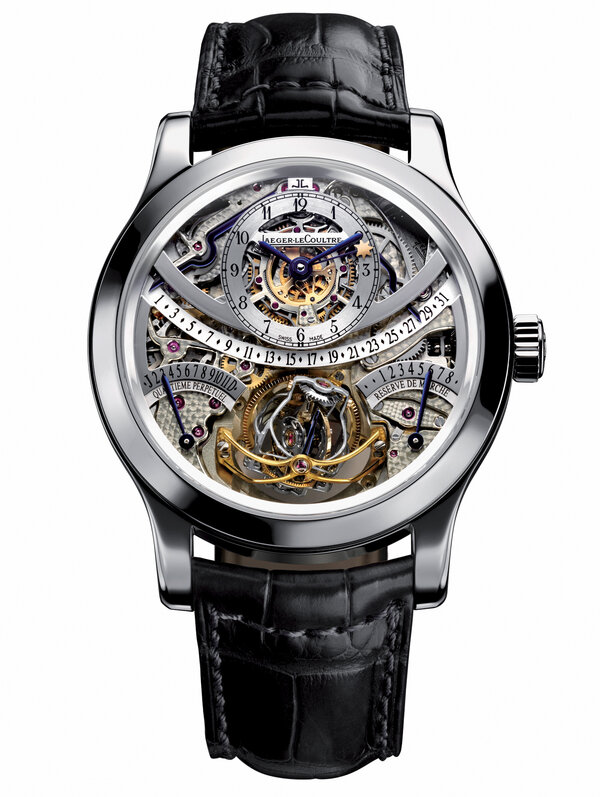 A tourbillon — a French word meaning “to whirl around” — is a revolving mechanism that neutralizes the effects of gravity on a timepiece, so it tells time more accurately. Patented by Abraham-Louis Breguet in 1801, tourbillons initially operated on a single axis as they were designed to regulate pocket watches, usually stored upright in a coat or vest pocket. For wristwatches, the escapement and balance wheel of its regulating system were mounted in a rotating cage that revolves on its own axis.

The result of Mr. Coudray’s work was a spherical wonder that can operate on as many as three separate axes.

“Here’s this big guy with a beard and long hair,” Mr. Ghotbi said, “halfway between a heavy metal guitarist and a mad scientist, who literally reinvented the wheel with the Gyrotourbillon and created a new way of thinking about watches and the way movement is perceived.”

“Nobody,” he said, “had seen something like this with the complexity of this whole movement going in two different directions and beating at two different speeds.” (In fact, the independent watchmaker Franck Muller began work on a similar movement at the same time, and released it just before Mr. Coudray.)

Mr. Coudray says he came upon the trade “of pure chance,” even though his father Jean-Pierre and his grandfather, Pierre, had built and repaired watches. The craft didn’t appeal to him as a young boy or a teenager. A self-proclaimed below-average student, “I liked mechanical engineering but didn’t want to get my hands too dirty,” he said.

A decisive moment came at age 17 when he participated in a national contest for arts and design called Prix de la Formation aux Métiers d’Art (now called Prix Avenir Métiers d’Art). After winning first place locally and at a regional level, as well as seventh place in France, he warmed to horology. “I’d rather be among the top performing students than an average one,” he said. “Plus, with watchmaking, when it’s cold outside you are inside, and it gets very cold.”

He attended a small watchmaking school, Ecole d’horlogerie de Besançon, in eastern France before transferring to Technicum La Chaux-de-Fonds in Switzerland. After graduation, he restored antique watches at Musée international d’horlogerie in La Chaux-de-Fonds and in the town of Versailles before landing a position at Jaeger-LeCoultre.

“I was satisfied for about two-and-a-half months and then I got very bored doing standard assembly work and basic watchmaking,” Mr. Coudray said. But, under the guidance of the celebrated manager Günter Blümlein, Mr. Coudray spent 19 years at the Swiss manufacturer, discovering his passions and completing his own projects in and out of the workplace.

In addition to developing the Gyrotourbillon, he met and married his wife, Evelyne; they adopted their two children, Maxime and Estelle; moved into the windmill home, and purchased a converted 1954 French army ambulance, a Renault Goélette.

Although he is very shy, “Eric has this very strong inner self where he knows what and who he likes,” said Maximilian Büsser, founder and owner of MB&F. “He loves to create but he’s not gregarious at all.” Mr. Büsser and Mr. Coudray were colleagues at Jaeger-LeCoultre, but it wasn’t until 2016, when Mr. Coudray joined TEC Ebauches, the horological movement, manufacturing and assembly company where he still works, that the two were able to partner and conceive MB&F’s Thunderdome.

“He will always tell you how simple and easy it is, which is unnerving,” Mr. Büsser said, “but for him it really is simple. The complicated part is explaining it to someone else, because very few people have an innovative outlook. For most, creating in the watch world is like driving looking into the rearview mirror. Not for Eric.”

To envisage the Thunderdome, Mr. Coudray combined various horological concepts. “It took 30 seconds to see it in my head and understand the general layout and structure,” Mr. Coudray said about the triple axis, three-cage, fastest, largest regulator in the history of watchmaking.

He bypassed a traditional Swiss escapement in favor of adapting one patented by the American watchmaker Albert H. Potter in 1875, a pocket watch movement that revolved around a fixed escape wheel.

“Eric looked into the history books and found the heart of this 20th-century complication in a reimagined 19th-century innovation,” Mr. Büsser said. “I remember the original drawing was a sphere under a dome where we had to find a way to show the time because we know the star was going to be the movement.”

Since the spread of the pandemic in Europe, Mr. Coudray has settled into working from various places at home, from his sunshine yellow kitchen to the garden. A night owl, typically turning in between 2 and 4 a.m., he doesn’t “disconnect because, well, I don’t think I’m ever connected to start with. Ideas come to me naturally.”

Mr. Coudray’s tourbillons are akin to “an astronaut rotating in an antigravity machine,” according to William Rohr, the founder of Massena LAB, a studio that creates, designs and develops timepieces with renowned watchmakers. “You cannot miss Eric’s work; every item he makes is very dramatic and visually stunning to anyone, not just watch people. He deserves to have his name on a dial.”