Tommy Dorfman was holding a kitchen knife that could make Norman Bates wince, wondering what to do with the kale.

“How should I cut this?” Mr. Dorfman said.

The 26-year-old actor was preparing lunch at the Ali Forney Center, a nonprofit in New York City that supports homeless L.G.B.T.Q. youth. The menu consisted of jambalaya and kale salad, and the salad required a fair amount of knife work.

A game plan was laid out by Jess Tell, the meal coordinator: Separate the leaves from the stems and chop them down to bite-size pieces.

Mr. Dorfman, best known for starring in the dark teen drama “13 Reasons Why,” was both in and out of his element. In, because he has volunteered with Ali Forney for more than two years, fund-raising, posting on social media and lending a hand in person. Out, because he almost never cooks for himself.

“I can cook, but I just don’t,” he said, noting that he and his husband, Peter Zurkuhlen, prefer to order in, when they are at home in Los Angeles. Mr. Dorfman’s domestic strengths lie elsewhere. “I’m a cleaner, a put-er away-er, an organizer of things,” he added. “I’m the hostess.”

Mr. Dorfman was dressed in a Cher T-shirt and plaid Thom Browne pants, with his blond curls tucked into a baby blue Nike hat. He was in New York to perform in “‘Daddy,’” a new play by Jeremy O. Harris, a young and buzzy playwright, and had a day free of performances and rehearsals. A sous chef was needed at Ali Forney’s drop-in center on West 125th Street in Harlem, and Mr. Dorfman was happy to step up. 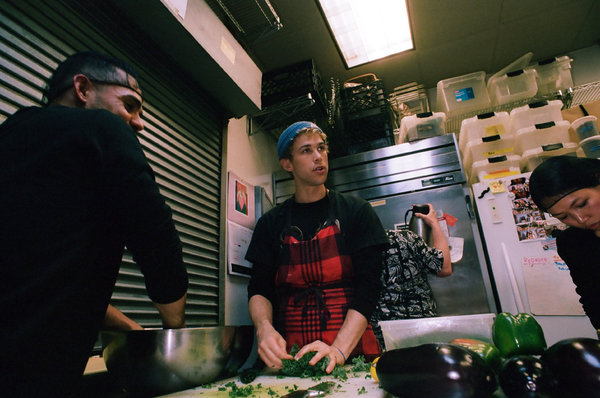 After vigorously washing his hands, he donned a red-and-black apron and, armed with the knife, started hacking his way into a dense mountain of kale, saving the stems for later use. He liked being put to work.

“As nice as it is to make an appearance at an event, I don’t find that the most fulfilling way to support an organization,” he said, dabbing his face when he started working up a sweat. (He was promptly told to rewash his hands.) “The more I’m in service, the less I’m in self. I try to spend as little time thinking about myself as possible. I find that’s not a constructive way to live. By coming here, by volunteering, it’s a way to get out of my own head.”

During his childhood in Atlanta, with three brothers and one sister, giving back was part of his family’s ethos. His father, who spent Sundays volunteering for the homeless, “was always interested in supporting underprivileged youth,” Mr. Dorfman said. “He created a nonprofit basketball program and housing systems. He had people living with us from time to time. He’s always been that person.”

That may explain Mr. Dorfman’s engagement with political and social causes. His Instagram feed not only features shirtless selfies, but also photos with Emma González, a gun control activist who survived the Parkland, Fla., school shooting, and posts urging his followers to vote.

He was on the February cover of Out magazine and wrote an essay last year in Teen Vogue about wearing gendered clothing as a nonbinary person. As Walt Whitman may have put it, he contains multitudes.

Set entirely on the patio of a modernist Los Angeles manse with a large pool, which reflects an undulating Hockneyesque light across the stage, the play deals with art and identity, with Mr. Dorfman moving from bitter frenemy to a compassionate voice by the play’s surreal final act.

“I’ve never worked this hard in my life professionally,” he said, as he squeezed lemon juice over the kale. “The show’s a marathon. I’ve never done a play. I honestly do thank God every day when I come to work because the people are so talented and lovely.”

Next up, Mr. Dorfman has a role in the coming season of “Jane the Virgin,” a comedy telenovela on CW. “I’m the villain,” he said in a singsong falsetto (to say Mr. Dorfman’s inflection is extremely expressive would be an understatement).

He’s also in “American Princess,” a comedy drama from Jenji Kohan, the co-creator of “Orange Is the New Black.” “I’m basically playing a drunk, gay baby,” he said with a shrug.

But first he had to conquer the kale. He was given the arduous task of massaging the fibrous leaves into a tender salad. After dousing it with olive oil, he slipped on a pair of plastic gloves and began kneading it violently. After a good 15 minutes, he was working up a sweat again. “Does this mean I don’t have to go to the gym today?” he said.

Shortly after 1 p.m., the prep work was done and the proverbial lunch bell rang. Mr. Dorfman ladled the jambalaya over rice, followed by a heaping portion of his salad. “Let’s turn on some music,” he called out. “Bodak Yellow” by Cardi B filled the room. As he worked, his hips swayed and his lips silently mouthed the lyrics.

A young man in a yellow hoodie approached for his lunch. “You look familiar,” he said.

“Do I?” Mr. Dorfman said with a sly smile, before giving him his plate.