Paris Couture Week is known for over-the-top gowns and fashion as fantasy but the harsh reality of the Australian bushfire crisis was brought to the catwalk thanks to two Australian-born designers. 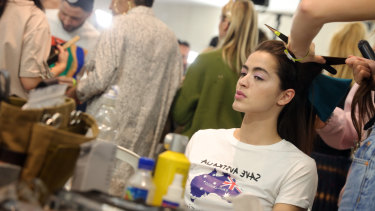 A model wearing a ‘Save Australia’ bushfire awareness T-shirt has her make-up done backstage before the Ralph & Russo show at Paris Couture Week.Credit:Getty Images

"The bushfire crisis has truly hit close to home, and has been devastating to witness," said Ralph, who is originally from Sydney. "We have been horrified to see and hear of the damage being done on a daily basis, some of which has directly affected our close family, friends and clients, and all of those fighting tirelessly to put out the fires are constantly on our minds.

"We wanted to do something, anything, to help those most affected, be it those who have lost or otherwise been displaced from their homes, as well as the incredibly brave individuals on the ground in the middle of it all."

Ralph & Russo created T-shirts with "Save Australia" for models in their show, including Canadian Winnie Harlow, to wear backstage, while last weekend they quietly launched a fundraiser via their social media. 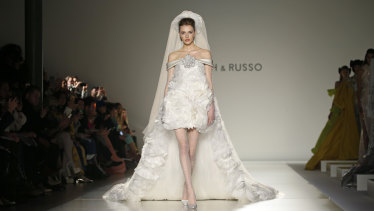 A model during the finale of the Ralph & Russo show at Paris Couture Week.Credit:Getty Images

But perhaps their most public gesture has been auctioning the suit Fleabag creator Phoebe Waller-Bridge wore to last week's Golden Globes. The suit sold on Monday, Australian time, for $40,000 to an unknown bidder.

Russo credited Waller-Bridge with the idea to auction the suit. "It was a brilliant idea and we were immediately on board," he said.

The brand also opted to forgo hard-copy invites, a longstanding tradition of the Paris shows, to further emphasise the brand's commitment to sustainability, Russo said. "[It] may not seem significant, but given the nature of couture and couture fashion week – which can be understandably quite traditional – this is no small feat," he said. 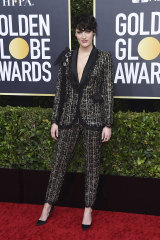 London-based Ralph & Russo is celebrating 10 years in business and said they had plans for 2020 to realise their vision of becoming a global luxury lifestyle brand. And despite rumblings about the impact Brexit will have on the fashion industry, Russo said the brand will continue to invest in its UK-based operation. "We invest a lot in our team, and put significant resources into finding and retaining global talent, and have every intention to continue to do so despite Brexit," he said.

Couture week kicked off on Monday with several high-profile shows, including Dior and Schiaparelli. Dior continued its practice of exploring themes of feminism and femininity with models walking under embroidered banners with slogans – the work of American feminist artist Judy Chicago – including, "What if women ruled the world?" The dresses, in a palette of golds, mauves and neturals, had a heavy Grecian influence and were finished with face veils and Roman sandals.

At Schiaparelli, designer Daniel Roseberry earnt praise for featuring 23 non-white models out of 36 in the show.

Paris Couture Week runs until January 23 and is often seen as a good indicator of what some of Hollywood's biggest names may wear to the Oscars, which take place on February 10, Australian time.