AS they watched their two-month-old baby girl take her final breaths in their arms, Ellie Dixon and Nick Hall's world came crashing down.

Little Harper had died from a rare heart defect – after undergoing four major operations in her first few weeks of life. 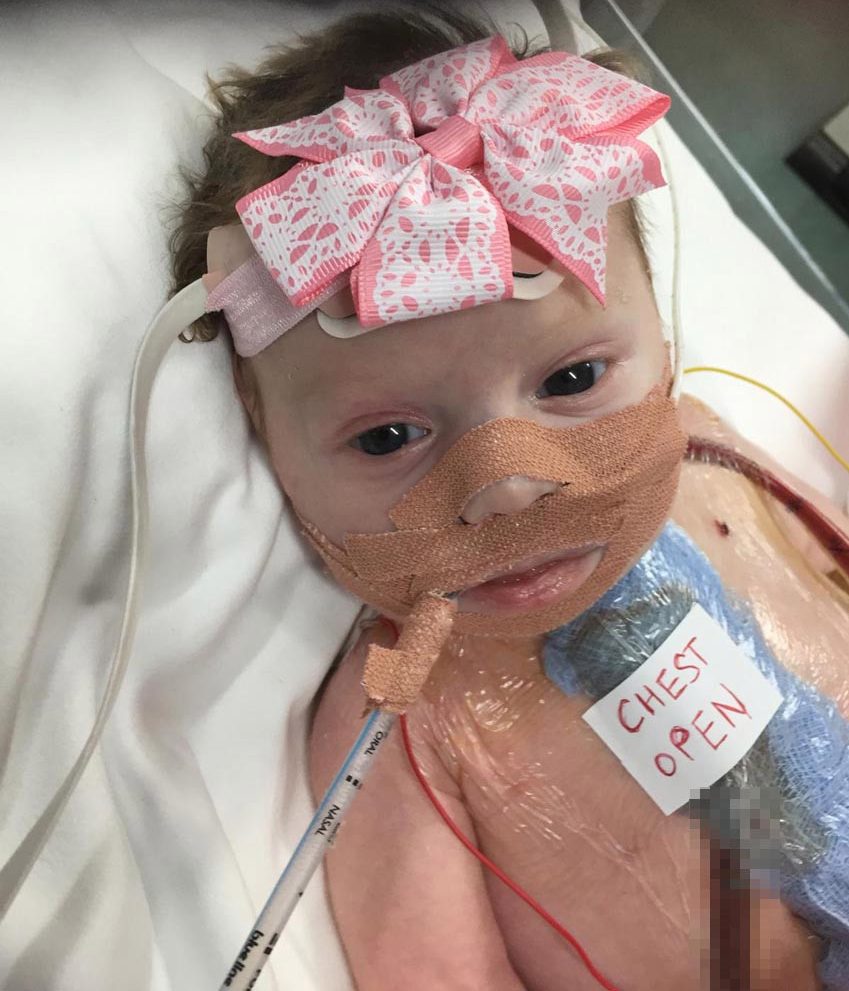 And, heartbreakingly, she passed away just days after doctors told her parents Harper had finally turned a corner with her health.

Crushed, Harper's parents Ellie, 26, and Nick, 35, from Walsall, West Midlands, are now sharing their ordeal to raise awareness for heart conditions in babies.

The devoted parents, who have a son together, Archie, two, are also launching a community network in Harper's name to help other bereaved parents and to preserve their little girl's memory.

Ellie said: "We are determined that Harper’s memory will live on. 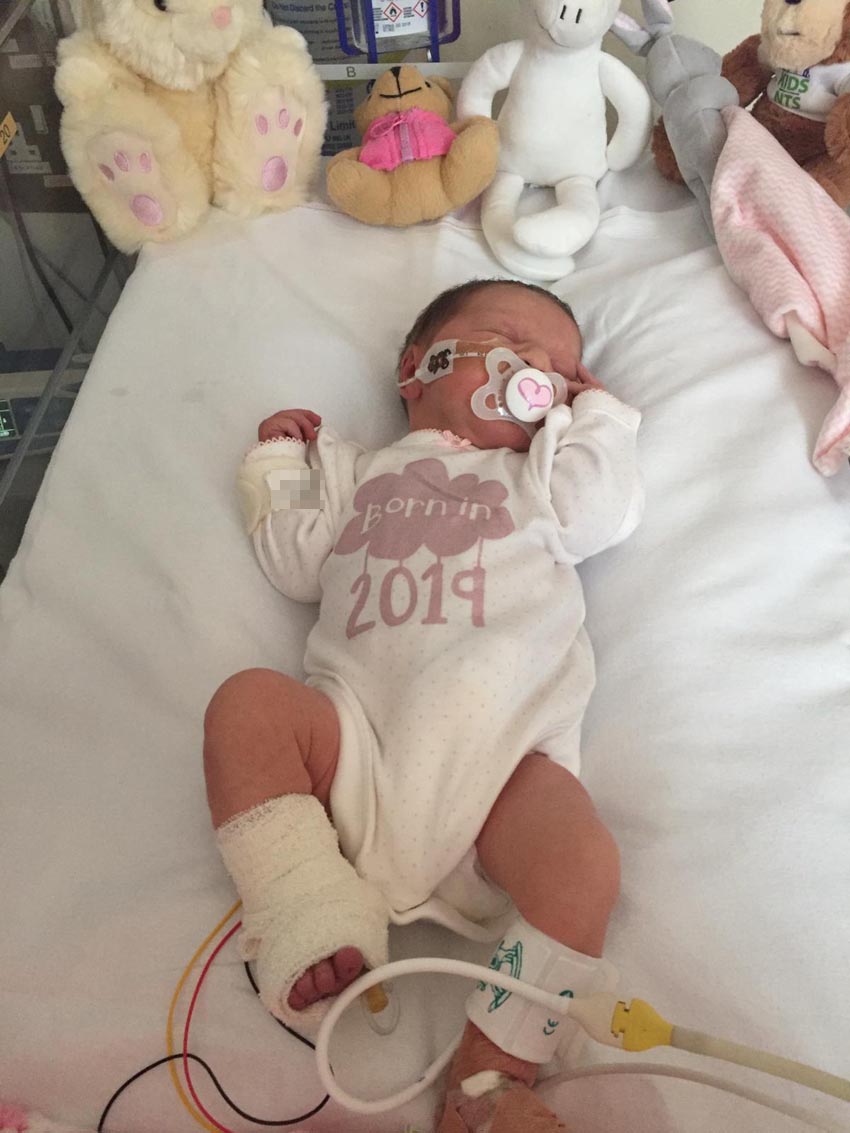 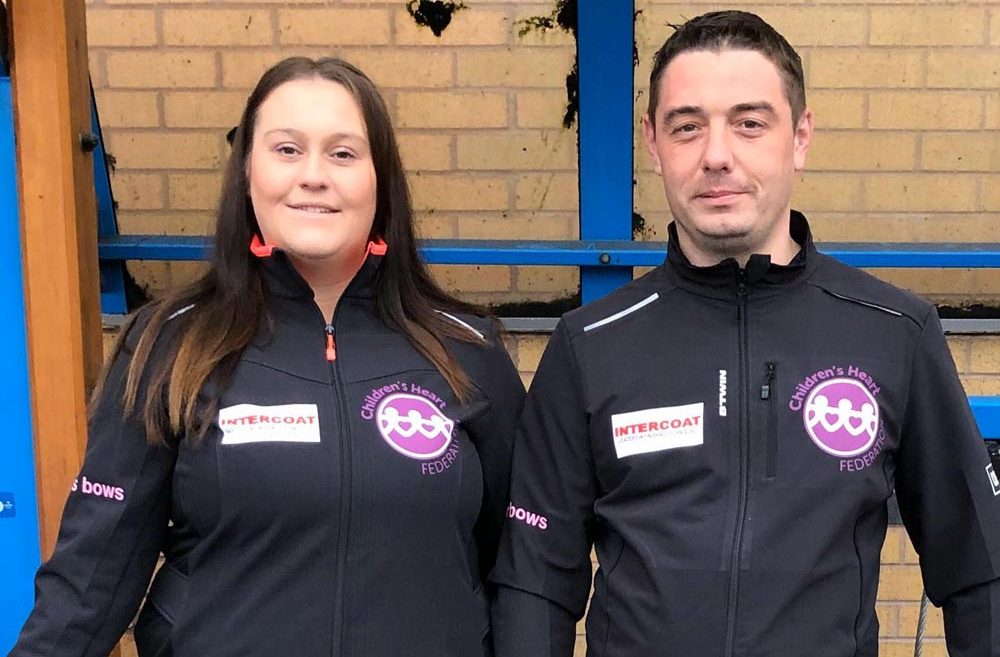 "Losing a child still feels like a taboo. It is still something people are uncomfortable talking about.

"You are called a 'widow' if your husband dies, but there’s not even a name for someone who has lost a child.

"It felt like once Harper died there was no support, we didn’t know where to turn.

"There are groups out there, but we didn’t know how to access them. There was no guidance.”

We are determined that Harper’s memory will live on

The trainee teaching assistant added: "So, we’ve set up Harper’s Bows as a community organisation, in the hope that local families going through something similar will get in touch and maybe we can help each other in some way. We want to create a support network."

Ellie and Nick's nightmare began when an abnormality with Harper’s heart defect was detected at Ellie’s 20-week scan.

Referred to Birmingham Women’s Hospital, Harper was diagnosed with Tetralogy of Fallot while still in the womb. 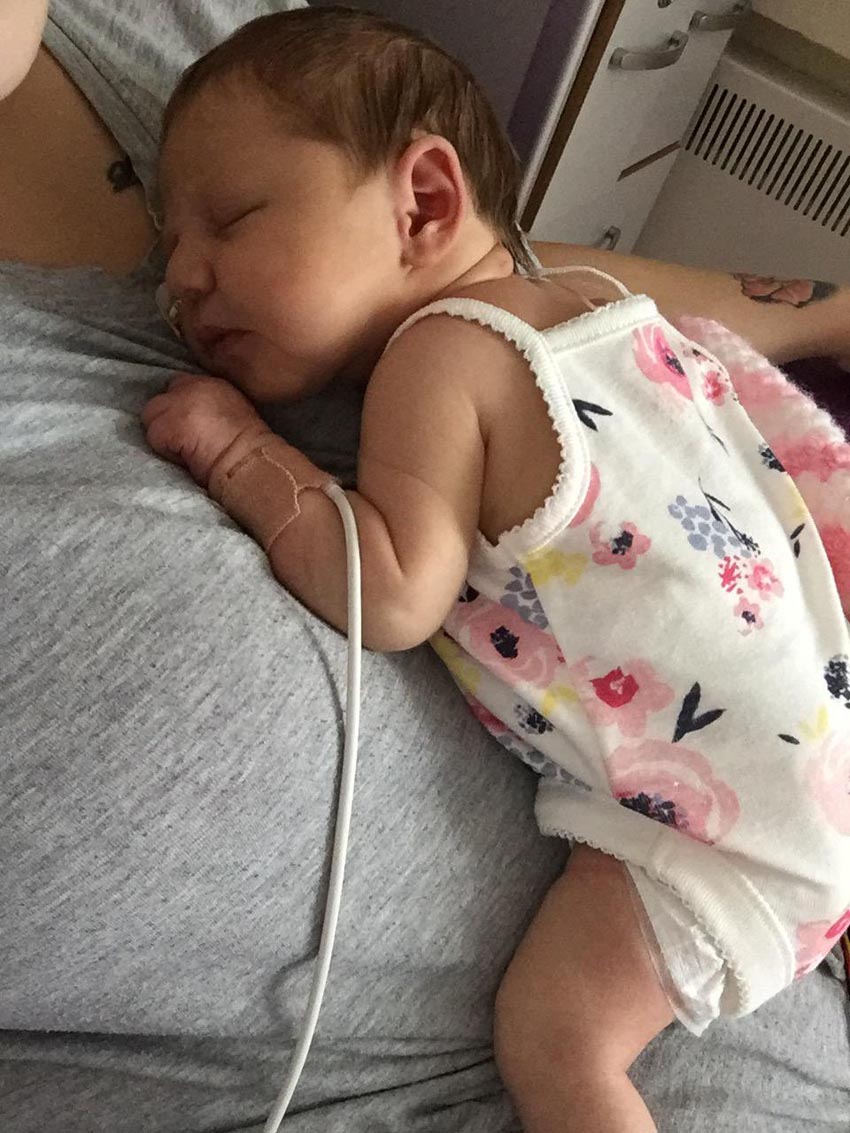 According to the Children’s Heart Federation, the condition is a group of four structural abnormalities within the heart that occur together, affecting the organ’s structure and ability to function.

Despite this, they were told Harper should live a normal life after surgery – giving them hope.

Delivery driver Nick, who has a daughter from a previous relationship and is stepdad to Ellie’s son Alfie, eight, said: "We were told that the condition was serious, but fixable.

"We knew she was going to need operations to repair it, but we thought that our girl would then go on to live a happy and normal life.

"We researched it and found no horror stories, so we felt quite relaxed.

"We even expected her to come home after the birth, thinking we’d know if she needed to go to hospital, because she would turn blue, but we never got to that point. We never got to bring her home." 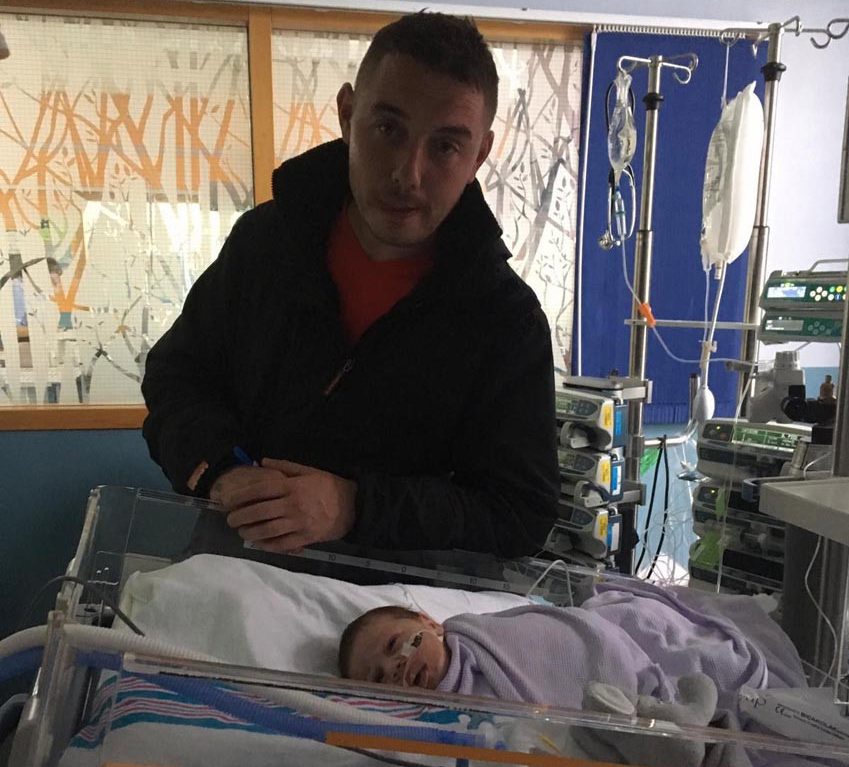 Born on May 24, by caesarean section, weighing 6lbs 15oz, Harper was rushed straight to the neo-natal intensive care unit at Walsall’s Manor Hospital.

"Her saturation levels – the amount of oxygen in her red blood cells – were fluctuating for the first 12 minutes after she was born, so they had to stabilise her," Ellie said.

"I was still in theatre, so didn’t even get to see her straight away. They took me down in a wheelchair a couple of hours later.

"She was in an incubator, but she looked fine, she was perfect.

"She was a really healthy weight compared to some of the premature babies that were also in there. 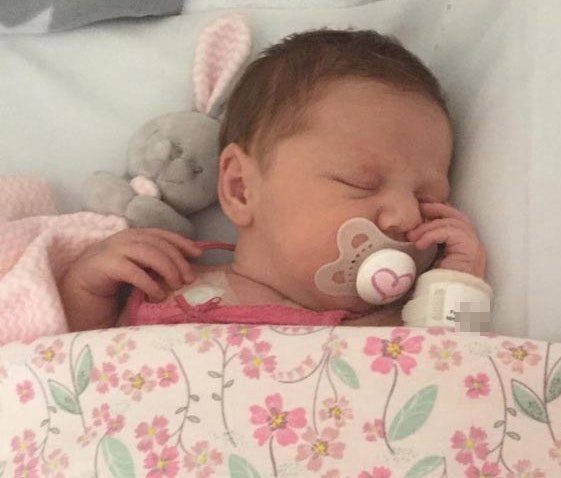 "There were no tubes or wires, it just didn’t make sense. She didn’t seem seriously ill.

"We thought they must have got it wrong."

With her oxygen levels dipping, Harper was just 12 hours old when she had a procedure to help open up the blood vessel connecting her pulmonary artery to the aorta, to increase the blood flow from her heart to her lungs.

Then, at two days old she was transferred to Birmingham Children’s Hospital, where she was placed under general anaesthetic so cardiologists could scan her heart.

She was in an incubator, but she looked fine, she was perfect

With blood still not pumping efficiently to her lungs, Harper had her first operation a month later to insert a balloon catheter into part of her pulmonary artery.

Ellie said: "We held her hands as she was again placed under general anaesthetic, then spent the next five hours pacing the corridor.

"Despite a complication with the surgery, as the catheter pierced an artery, she was doing well and a few hours later she actually opened her eyes and acknowledged us. It was such a relief." 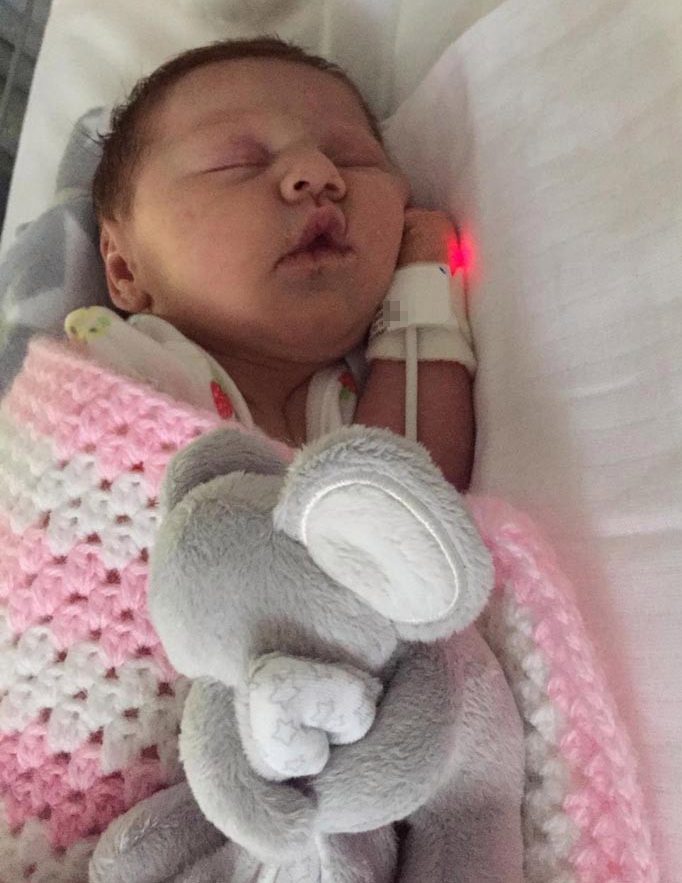 A few days later on June 13, with Harper growing stronger, she had her second major seven hour operation – open heart surgery – to fit her with a patch on her pulmonary artery, intended to increase the blood flow to her heart.

"We knew there were risks as with any major surgery, but we were desperate to give her a chance at survival," Ellie explained.

"Everything went to plan. She had such determination and fight and we were starting to relax."

A few days later, Nick brought her big brothers in to meet Harper for only the second time.

Ellie recalled: "I was delighted that the family was going to be together. Alfie and Archie were so happy to see their baby sister properly." 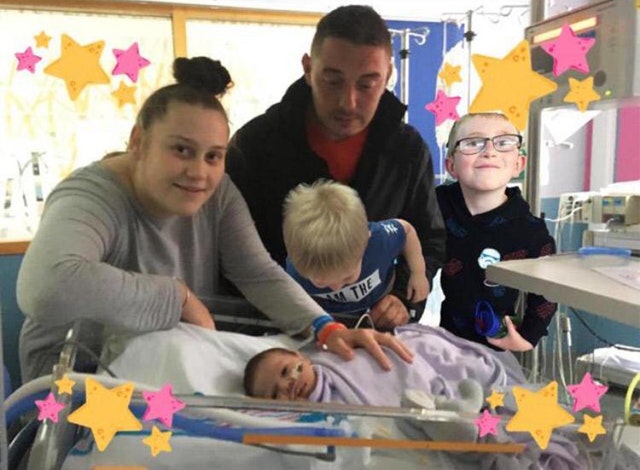 But their joy was soon replaced by panic, as Harper started struggling to breathe.

Nick said: "There were two people around Harper’s bed, one performing CPR on her and then the room filled with people.

"The surgeon had to cut open her chest and perform a cardiac massage. I was convinced we were losing her."

Then the terrified parents were told to say goodbye to their little girl.

Ellie said: "The nurse told us to come and kiss Harper goodbye. She was cold and grey and lifeless. "We knew she was going to die, but the surgeons kept working on her.

"She had been in cardiac arrest for almost an hour, not breathing on her own, and hooked up to a life support machine. 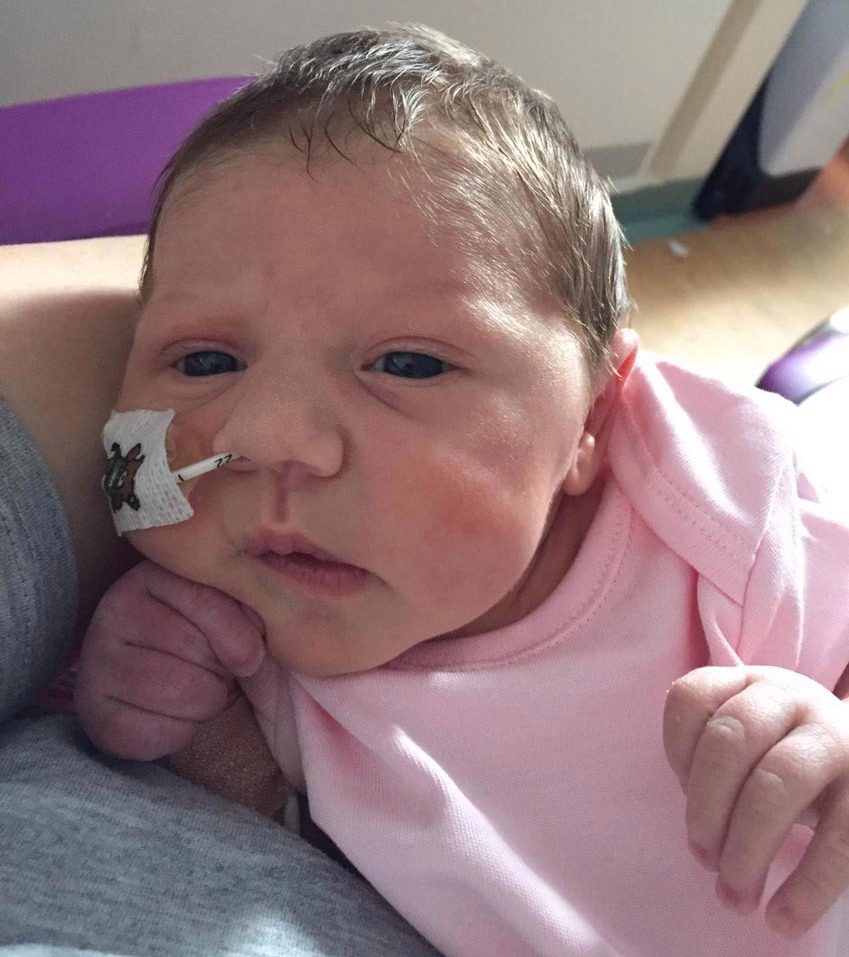 "We stayed by her bedside all night, holding her hands and kissing her cheeks."

Plucky Harper fought on and, after eight days of trying to bring her back round again without success, she had a second open heart operation – risky surgery with only a 30 to 50 per cent chance of survival, but which her parents knew was her best chance.

Amazingly, the surgery was a success and Harper came off life support and had a tube fitted in her artery, again to help the blood flow.

For the next three weeks she continued to get stronger and was doing so well that her parents decided to go home for a few hours – the first time Ellie had left the hospital since Harper’s birth two months earlier.

Ellie said: "We kissed her on the head and said goodnight, leaving the hospital at just after 6.30pm.

"But then, just after 9pm, we had a call from the hospital saying that she was really poorly. Her lactic acid levels had increased and oxygen levels had decreased.

"Nick put his foot down and we rushed back to the hospital. The surgeon said that Harper was not going to make it. We couldn’t believe it because she had been doing so well."

Ellie added: "We both cuddled Harper and told her how much we loved her. She was in my arms with Nick beside us and at just gone midnight on July 4, she slipped away.

"I keep thinking about how old she would be now and what she would be doing – causing havoc with the boys, I expect. 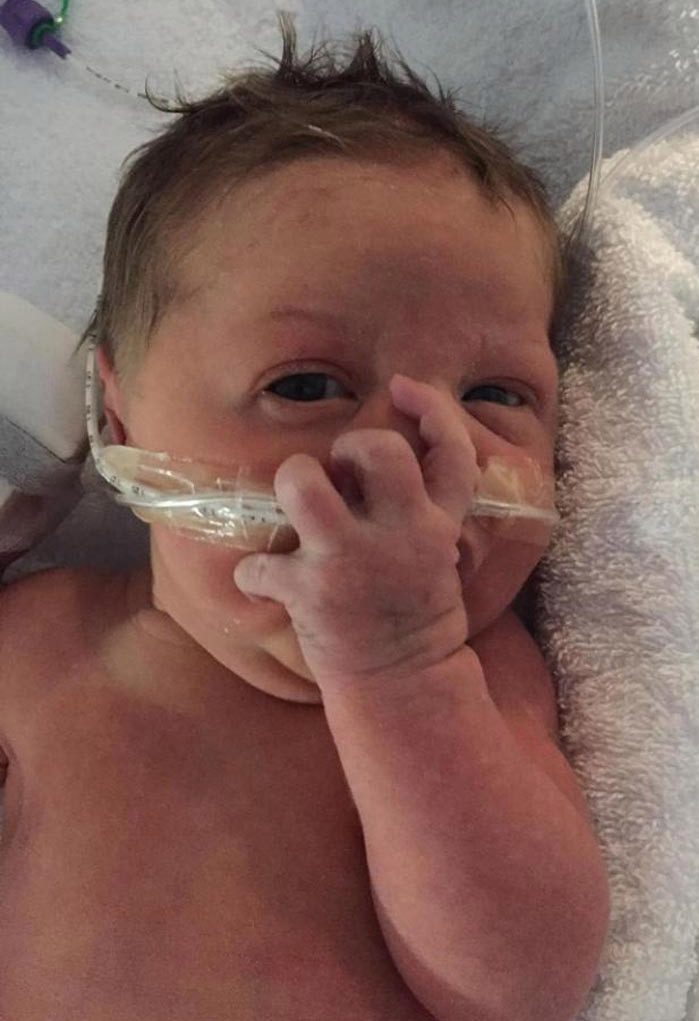 "We love saying her name and talking about her. Sometimes people will feel uncomfortable and won’t want to say it, but we think it’s easier to speak about her than try and pretend she was never here."

After a post-mortem found that Harper had died from heart and respiratory failure, her funeral was held at Bushbury Cemetery and Crematorium in Wolverhampton on August 9.

Her tiny coffin was taken to the service in a carriage drawn by white horses with pink bows, while her parents wore t-shirts with ‘mummy of an angel’ and ‘daddy of an angel’ printed on them.

"She was cremated and we have her at home now," said Nick.

"We have a place with her first bottle, her comforter, and hand castings. 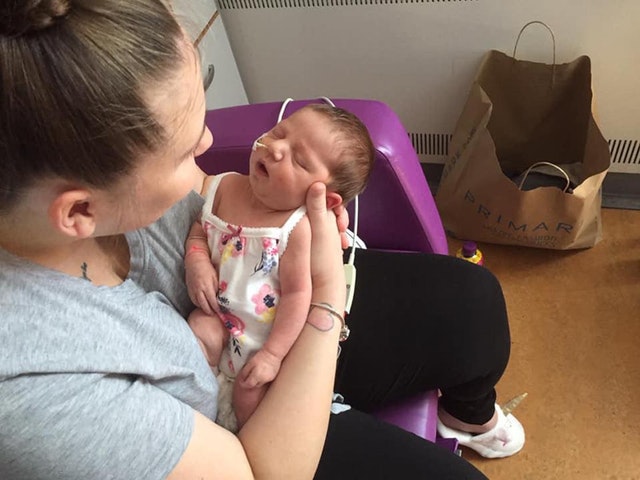 What is Tetralogy of Fallot?

Tetralogy of Fallot (ToF) is a type of heart defect present at birth.

The name Fallot originated from the name of a doctor who spotted this particular type of heart defect.

Tetralogy means fourfold – there are four defects found together.

These four defects are:

3. Over-riding aorta – The entrance to the aorta, which should only take red (oxygenated) blood around the body, lies over the VSD (the hole), allowing the right ventricle to pump some (deoxygenated) blood directly into it.

ToF can sometimes be seen on a scan during pregnancy. After birth the sound of blood moving through the pulmonary valve can be heard as a heart murmur.

The cause is typically not known. Risk factors include a mother who uses alcohol, has diabetes, is over the age of 40, or gets rubella during pregnancy. It may also be associated with Down syndrome.

"We want to keep her close to us. She never came home and now she’s home she’s not going anywhere.

“We want her to be remembered as being a little fighter. She went through a number of operations and after each one she came out fighting.”

In August Ellie and Nick, along with their friend William Harley, 66, are cycling 875 miles from John O’Groats in Scotland to Lands End in Cornwall, to raise money for the Children’s Heart Federation.

And members of their local community, as well as Nick’s employer Intercoat Industrial Paints, who have sponsored them and donated money, and the couple’s friends James Bell and Leanne and Julie Webb, have helped organise events in aid of the charity, to help raise awareness of heart problems in babies. 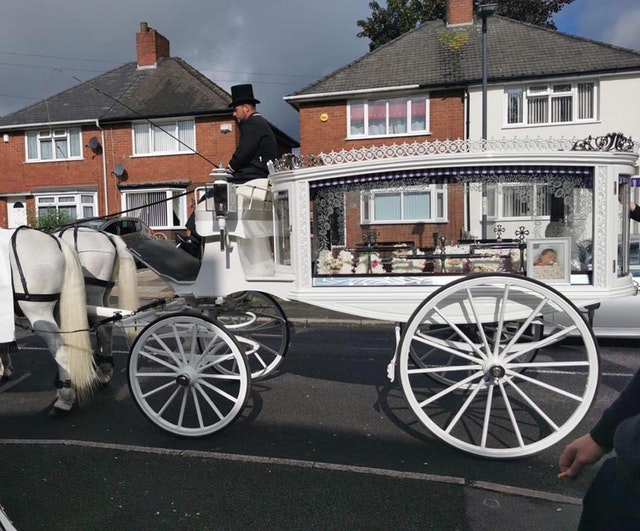 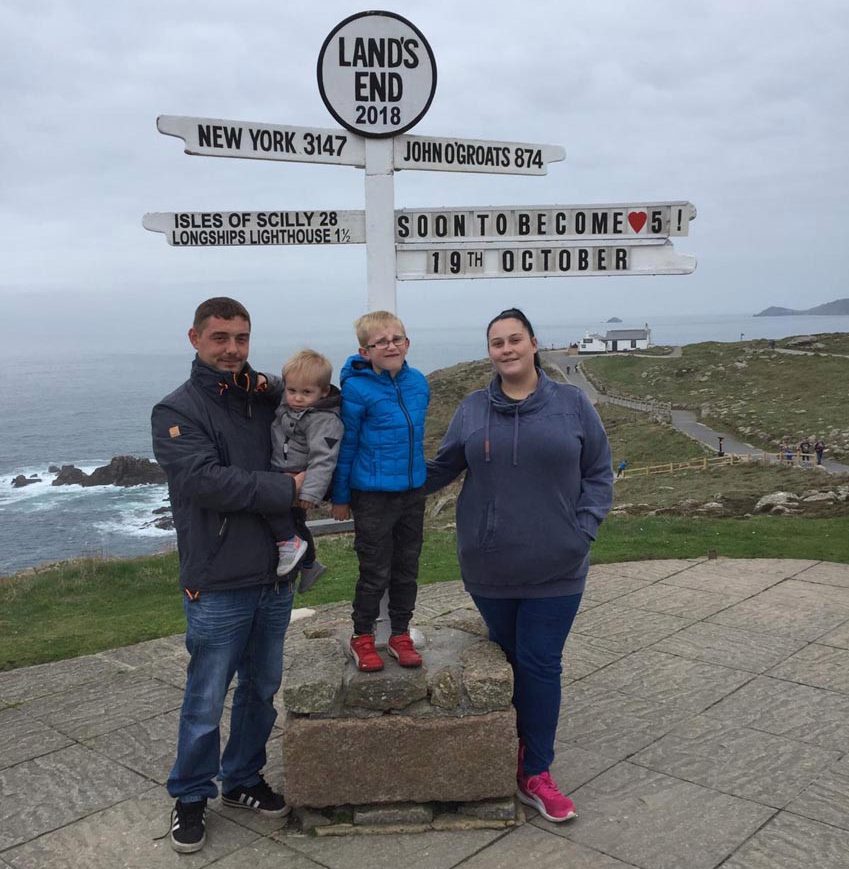 An anonymous good Samaritan, or “mystery running man” as they call him, is even taking part in the gruelling ultramarathon event, the Marathon Des Sables across the Sahara Desert in Harper’s name in April.

Speaking about his shattering loss, Nick continued: "Losing Harper was a complete shock.

"I’m struggling with the grief, I feel empty and angry. You should never lose one of your own children.

"We spent a few hours with her body and I carried her body from the ward to the cold room.

"I wanted to do it at the time, but I shouldn’t have done it. It was far too upsetting.

"The hospital was eerily quiet as it was the middle of the night, there was not a person in sight and it was just really surreal and horrible. I will never forget it. 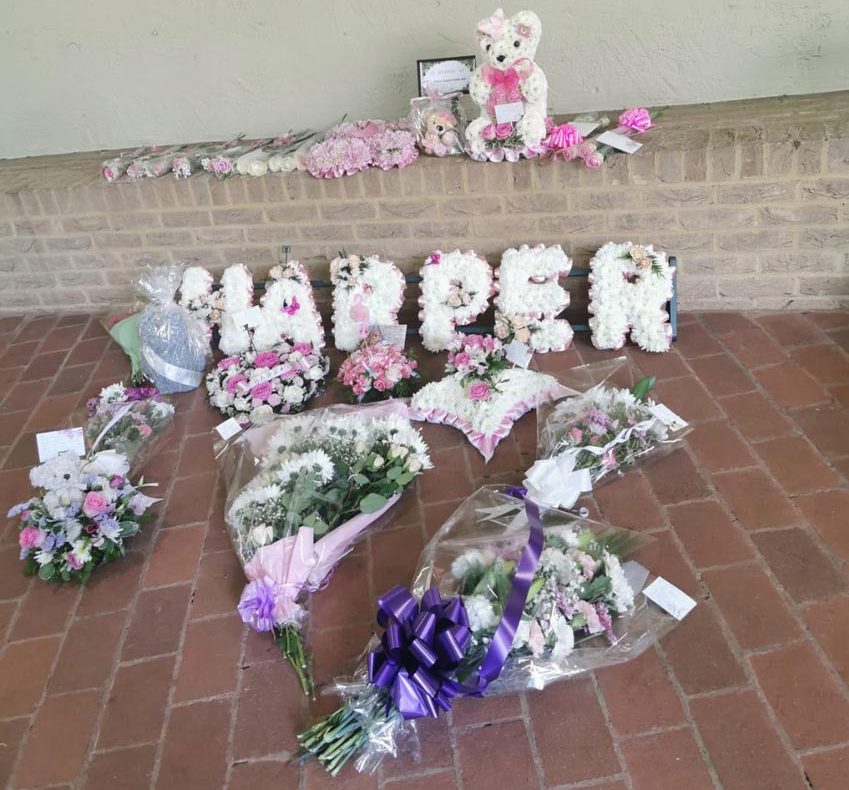 "The boys don’t fully understand what has happened, but we’ve told them their sister is a shining star in the sky now.

"And while we can’t bring her back, we are determined we will not forgot her and will keep her name alive and help other mums and dads in our situation through Harper’s Bows."

You can donate in Harper's memory here and you can find more information about Harper's Bows here.