BARING your boobs for a spot of cheeky topless sunbathing used to be a chic holiday practice.

Brigitte Bardot was famed for it on Riviera beaches in the 1960s, and it became a symbol of women liberating themselves from the patriarchy and sexual restraint. 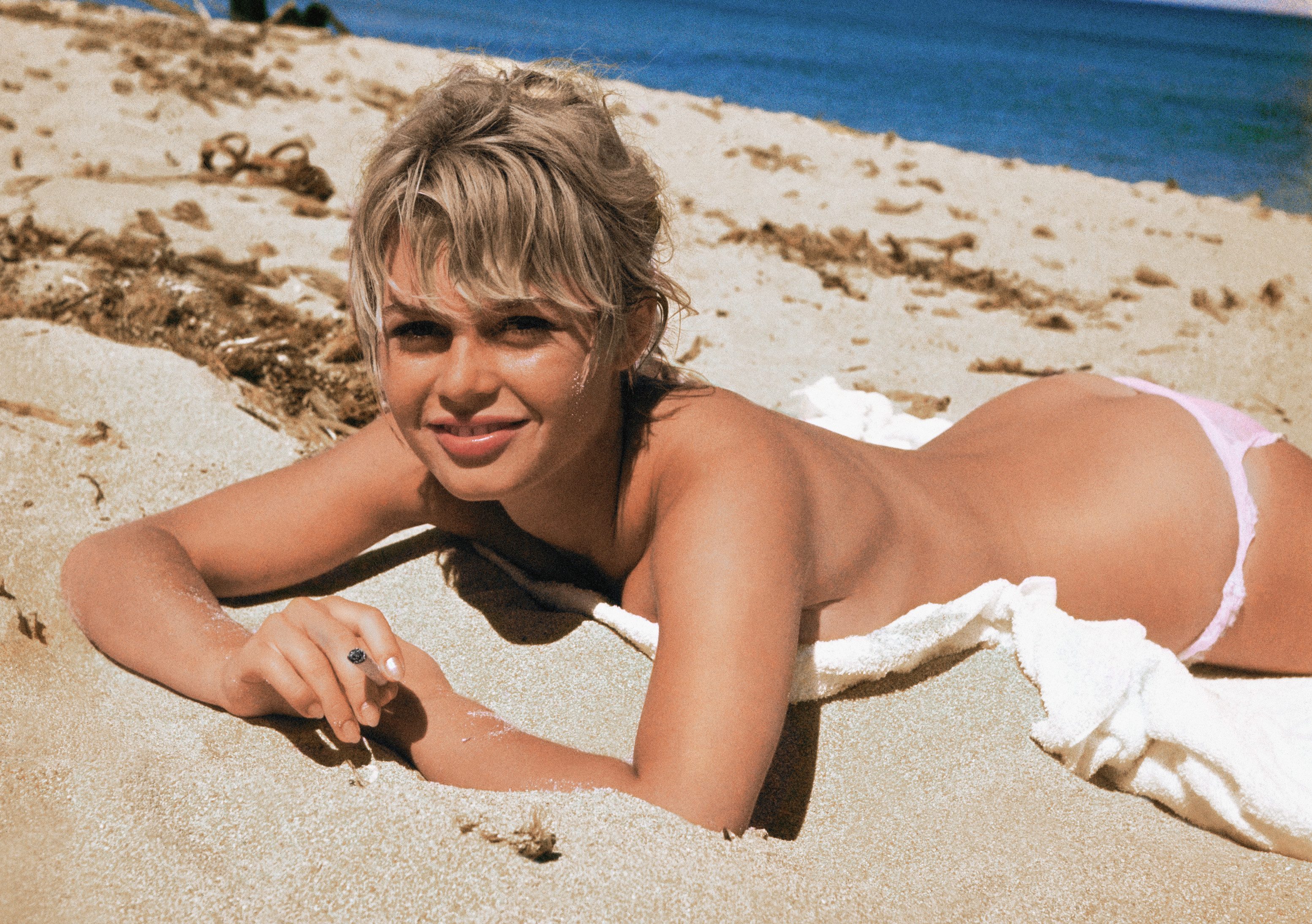 The number of women who regularly sunbathe topless has plunged in the past three years from 29 to 19 per cent, according to a survey of 5,000 women by the French Institute for Public Opinion.

Only 19 per cent of UK women have bared all on the beach, research found.

Hayley Yeatman, 52, a mum of three and gran of four from Scarborough, admits to sunbathing topless on hay bales in the middle of open fields and while driving her car. 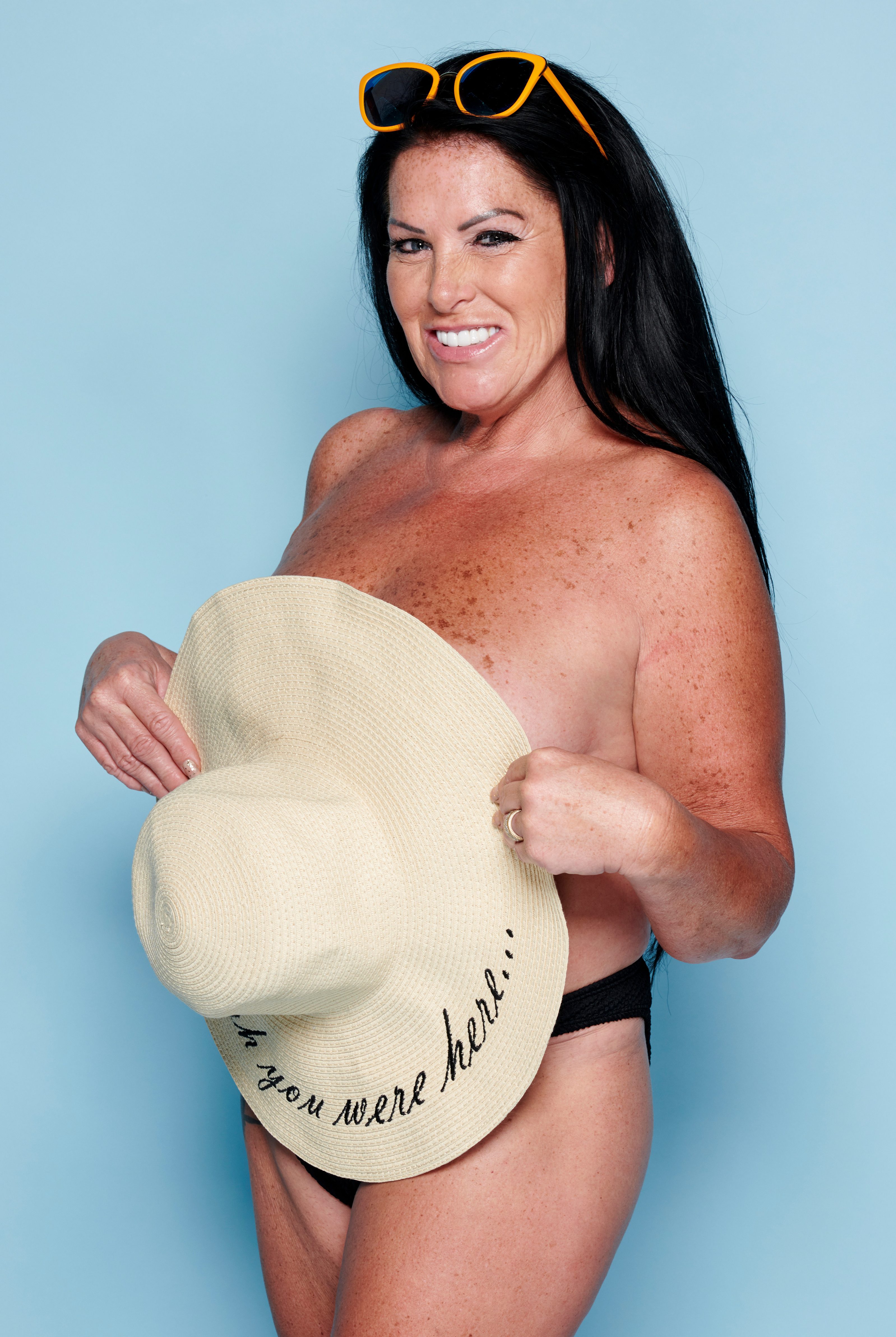 Last weekend, when it was stinking hot, I fancied topping up my tan. I was driving back from doing the grocery shopping when I passed a huge field covered in hay bales.

Fancying a quick roll in the hay, I whipped off my dress and bra, climbed on top of the bale and spent a blissful half an hour soaking up the sun.

The farmer driving his combine harvester got a right eyeful of my 34DDs and joked he'd need to buy his cows some eye masks.

While many people may think it’s not the way a gran should act, I don’t care. Sunbathing topless is my way of declaring I love my body and I’m not afraid to show it.

I first sunbathed topless when I was 18. My sister and I were on holiday in Spain and everyone else was baring all. 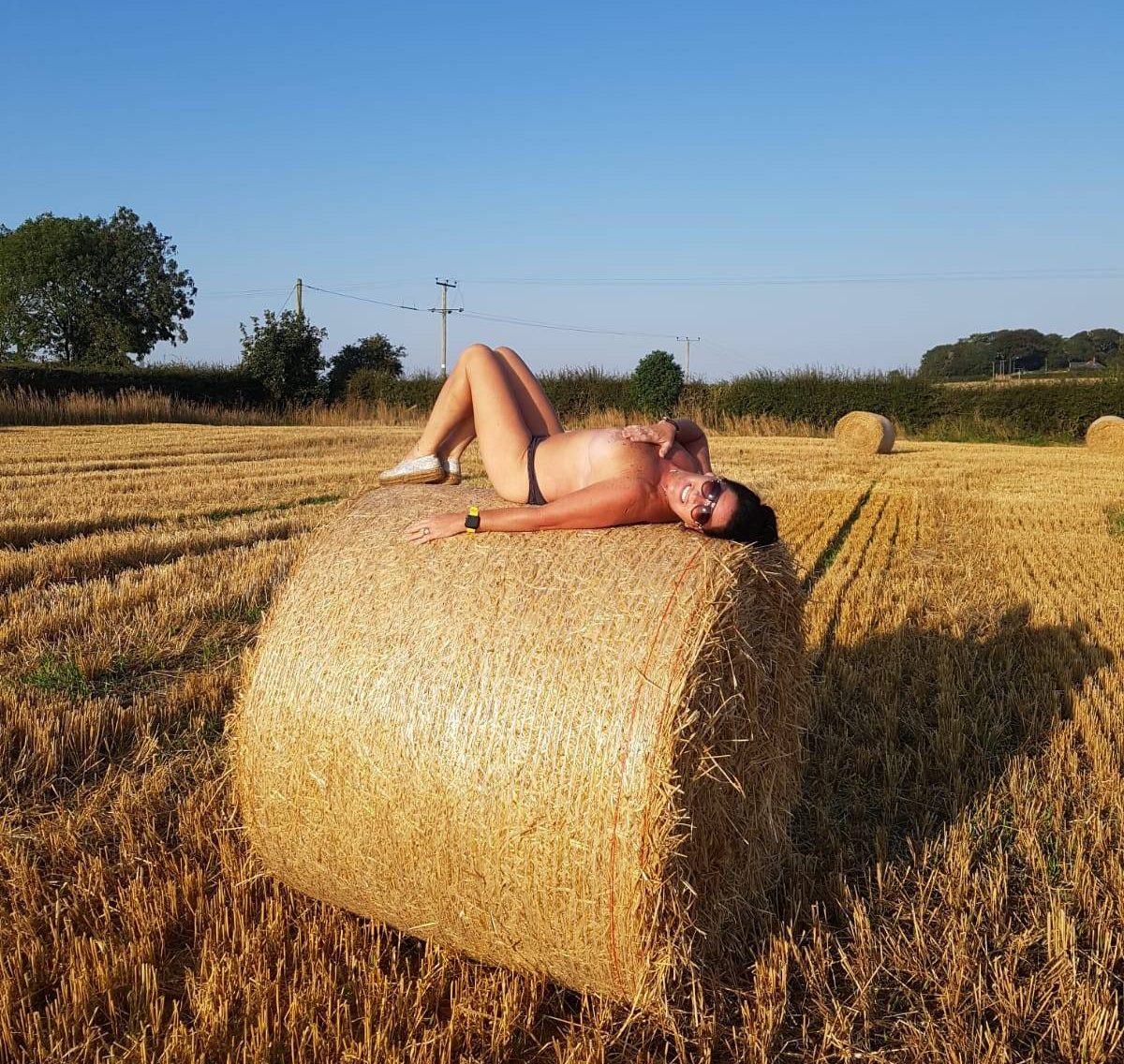 We’d never flashed our boobs before but after a couple of glasses of Prosecco we whipped off our tops and rarely put them back on again for three weeks.

Since then I have always sunbathed topless. Even when I was pregnant with my kids – Zoe-Zola, 33, Luke 27, and 26-year-old Lucy – I freed the nipple.

When I was breast-feeding and got cracked nipples the sun helped ease the pain.

What is the law on sunbathing topless in the UK?

It's not an offence to strip off in public, but all that changes if your actions alarm or distress those around you.

The police have advised people to be "discreet".

The law states: "In the absence of any sexual context and in relation to nudity where the person has no intention to cause alarm or distress it will normally be appropriate to take no action unless members of the public were actually caused harassment, alarm or distress (as opposed to considering the likelihood of this)."

I always sunbathe topless in my back garden.  If I’m driving along the motorway on a hot day and I am wearing a strappy top I take it off and drive topless to ensure my tan remains even.

I've never been pulled over by the police but I do get a lot of honks from truck drivers.

I’ve even sunbathed topless in a shopping centre car park while waiting for the AA.

One summer on holiday in France I was sunbathing on a villa balcony and nearby builders gave me the thumbs up. 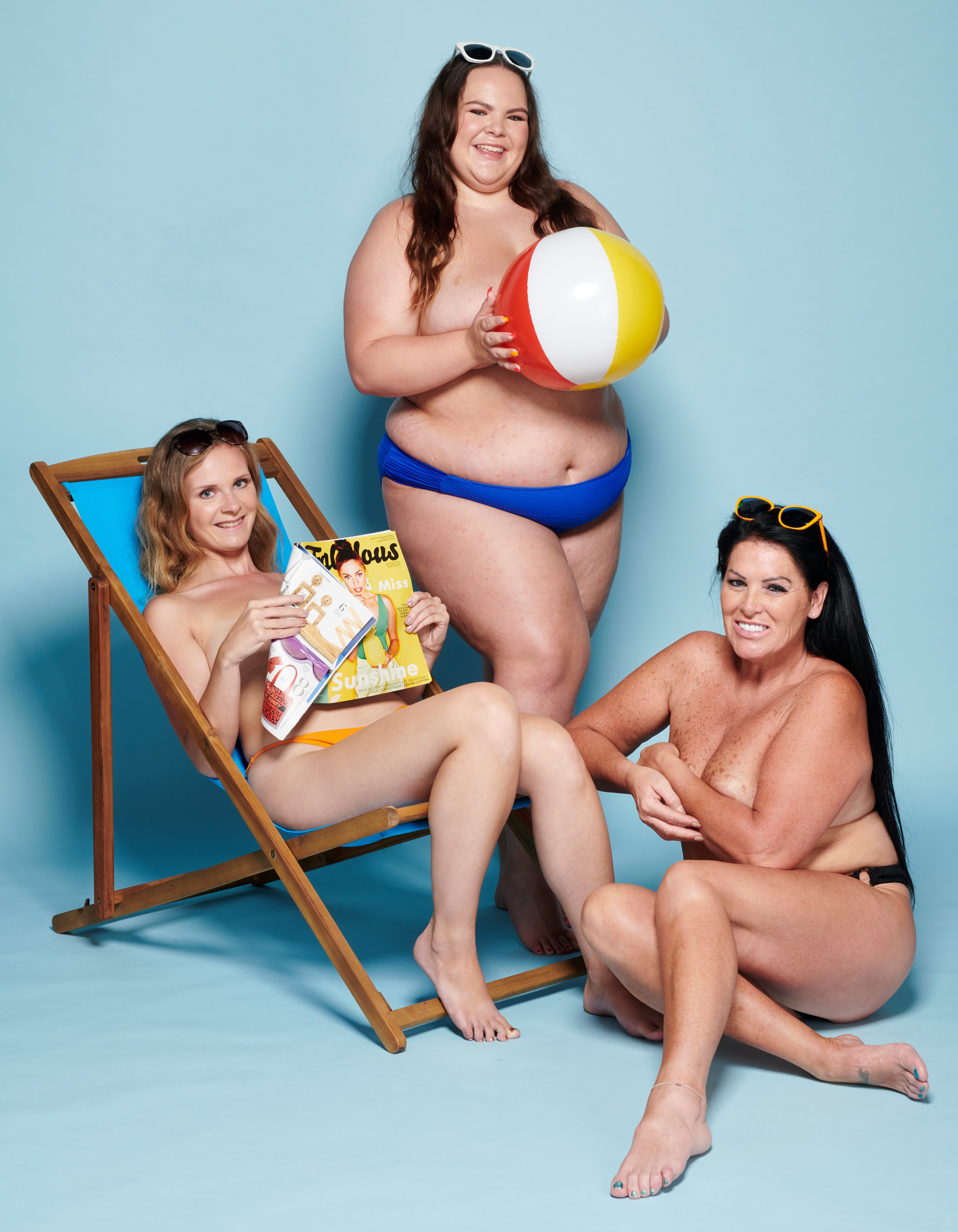 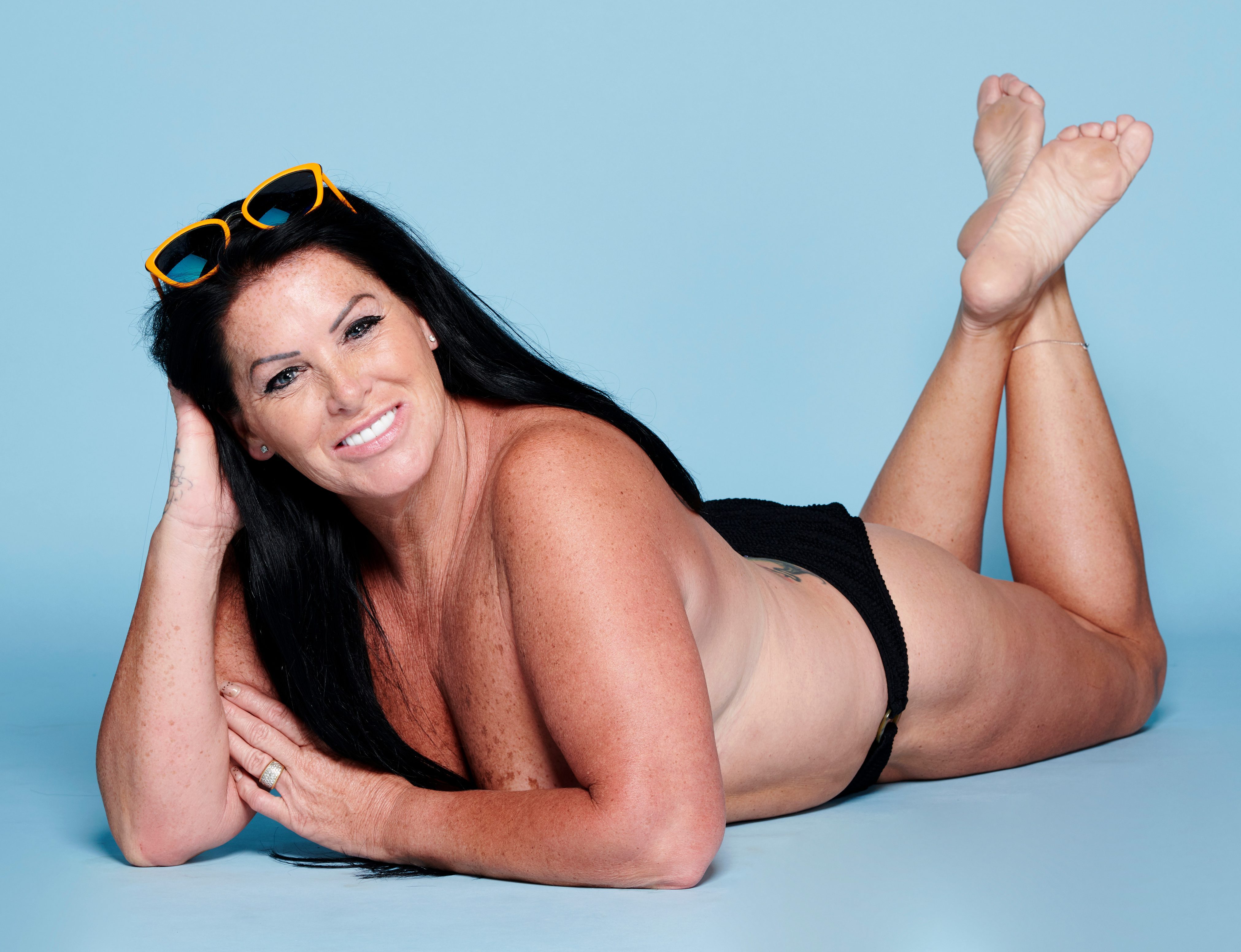 My husband Maurice, 54, a construction worker, thinks it's hot and we have often had great sex after he's seen me sunbathing topless.

My kids roll their eyes and warn their pals their mother may be topless in the backyard. My daughter's not too impressed, she always tells me cover up and moans that 'I'm mad'.

These days our obsession with covering women’s nipples is ridiculous. If you look at any red carpet event there is so much side boob, under boob, and top boob on display we might as well show our entire breasts. 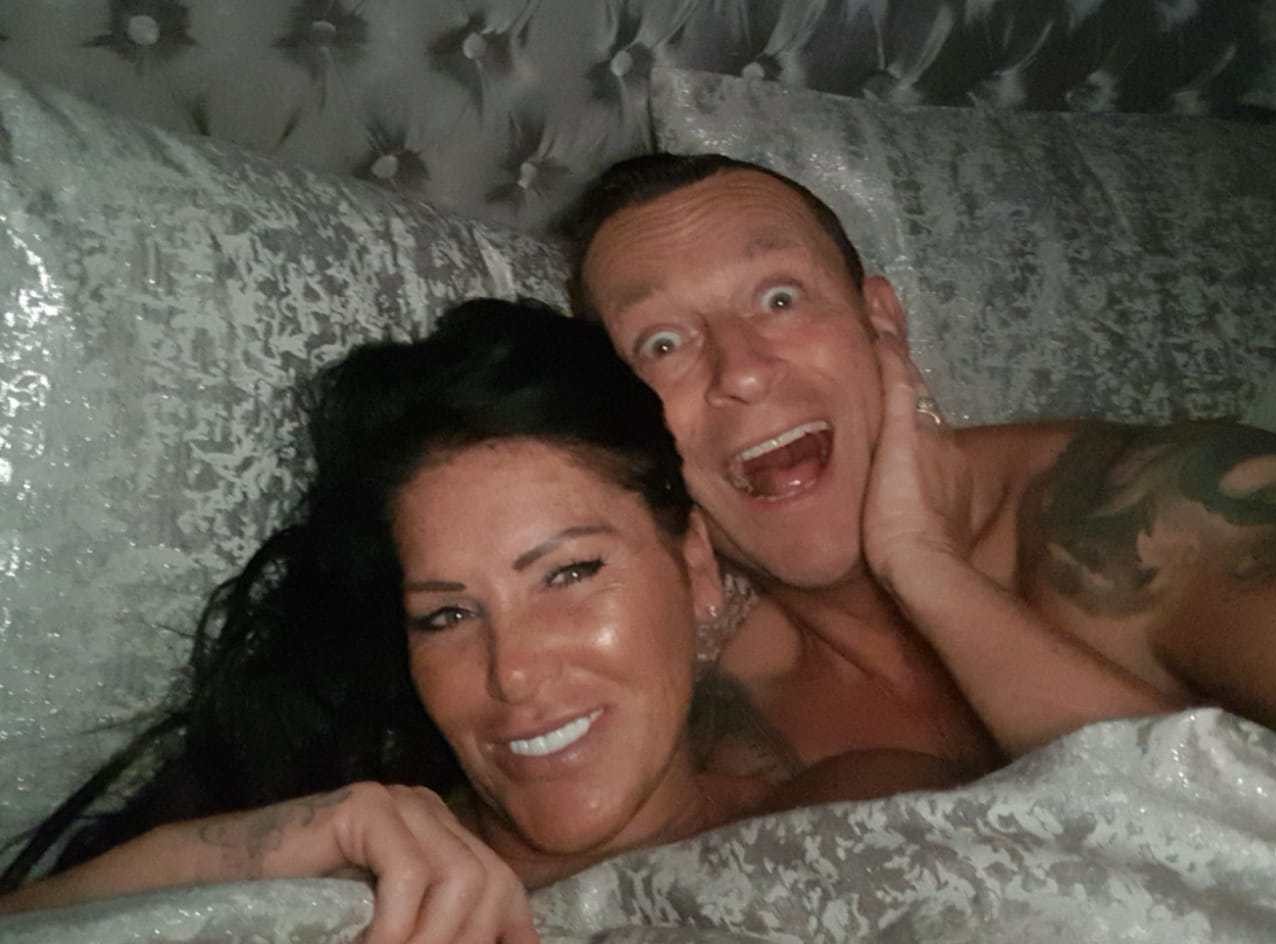 My breasts have fed my children, they’ve helped me bring new life into the world and they are glorious.

I want my grandchildren to feel they can take off their tops around me and sunbathe topless. I don’t care what other people think.

Anyone who criticises me for having the guts to sunbathe topless should watch out. I want fresh air and sun on my body and am happy to let it all hang out.

If you don’t like it, don’t look. I plan to still be sunning my bare breasts at 90.

Meg Gold, 21, is a plus-size pageant queen from Cardiff. The size 20 model started baring her 38FFs in a bid to help cure her psoriasis. 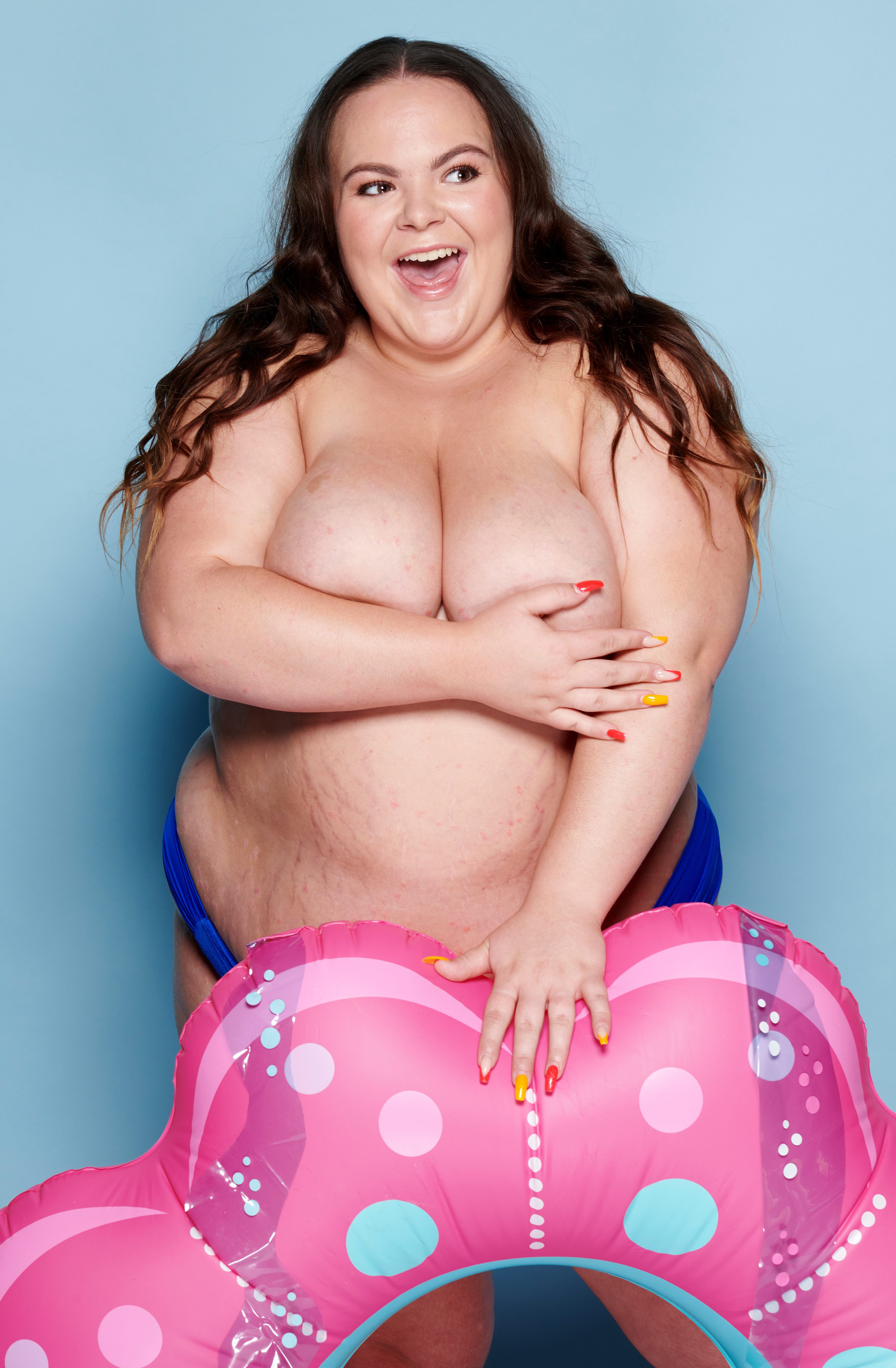 I whip my bra off at any chance I get. I do it regularly in my back garden, at the local park on a sunny day and even while hiking. My fellow walkers always do a double take.

But I haven't always been this way. Growing up, covering up on the beach was the norm for me. I’ve always been a big girl but when I hit puberty I gained even more weight.

I had to wear size 14 clothes at the age of 13 and was bullied mercilessly.  While my mates developed small, perky boobs mine grew and grew to a gigantic 38FF.

I was dubbed Miss Piggy. I lived in baggy tracksuits and was so terrified of the bullies I rarely wore a swimsuit. I had zero body confidence.

Then in 2015, when I was 18, a friend who was concerned about my plummeting self-esteem convinced me to sign up to a three-day body confidence workshop.

One of the instructors was a plus-size beauty pageant queen. She was inspirational and the experience gave me the guts to embrace my curves and start competing in pageants. 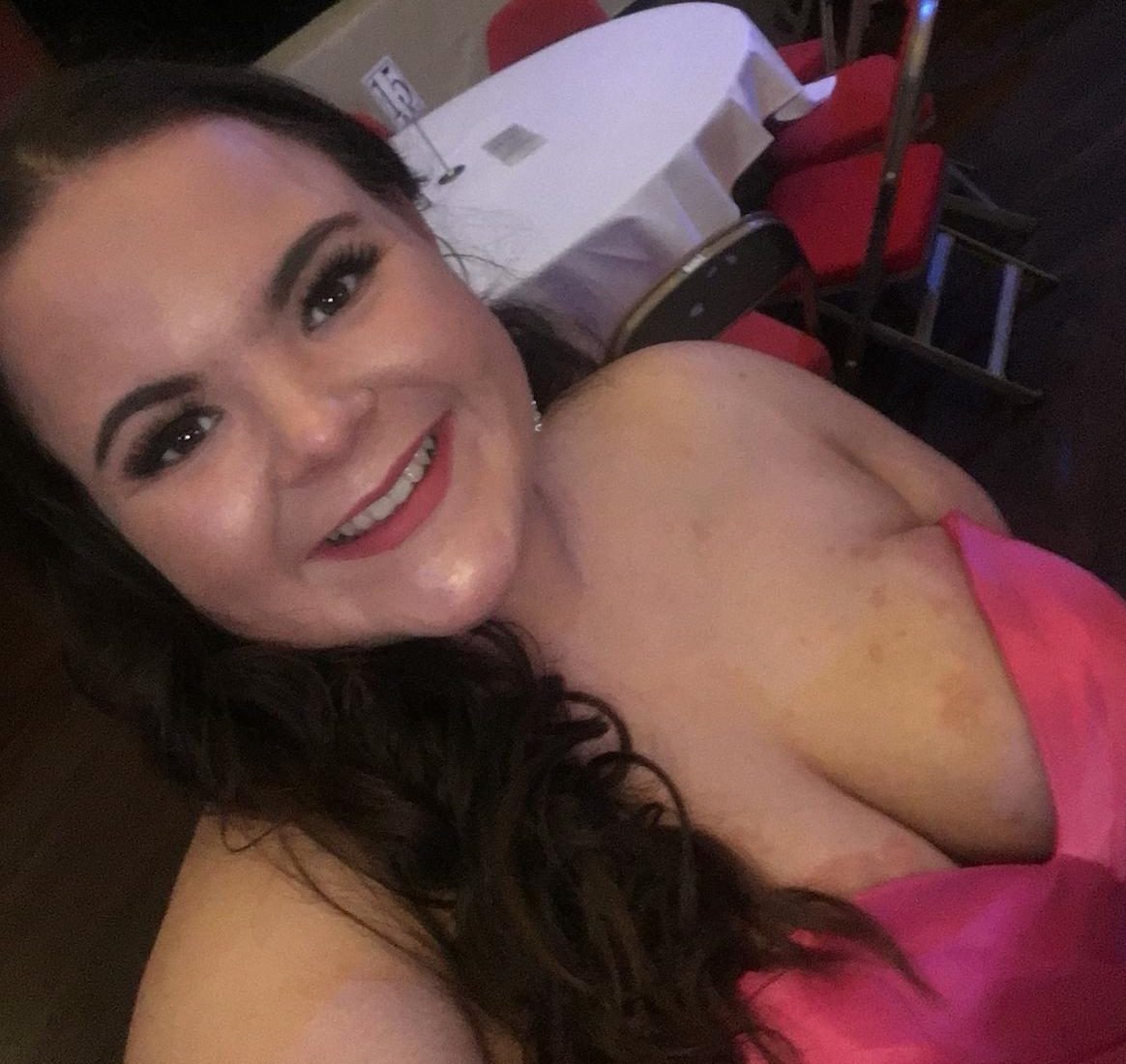 The condition causes red and crusty patches with silvery scales to flare-up on the skin.

They normally appear on the elbows, knees, scalp, and lower back, but can crop up anywhere on the body.

The patches can sometimes be itchy or sore.

Roughly two per cent of the population are affected by psoriasis and the number is roughly split equally between men and women.

Psoriasis has no cure but treatments can reduce the itchiness and the appearance of skin patches.

Topical treatments, meaning creams and ointments, can be rubbed into the skin.

If these aren't effective then phototherapy can be used to treat it.

This involves the skin being exposed to ultraviolet light.

As part of the competition I had to model swimsuits. To ensure I looked my best I realised I needed a good tan. At the same time I developed psoriasis on my belly, chest and my 38FFs boobs.

In 2017 I went on holiday to Crete with a pal. She wanted to avoid unsightly tan lines and I wanted to ease the rash on my boobs so we whipped off our tops and tried sunbathing topless for the first time.

Initially, I only lay on my front. I quickly realised I was being silly to be ashamed of my body and turned onto my back. Soon my breasts were golden and my psoriasis was clearing up. 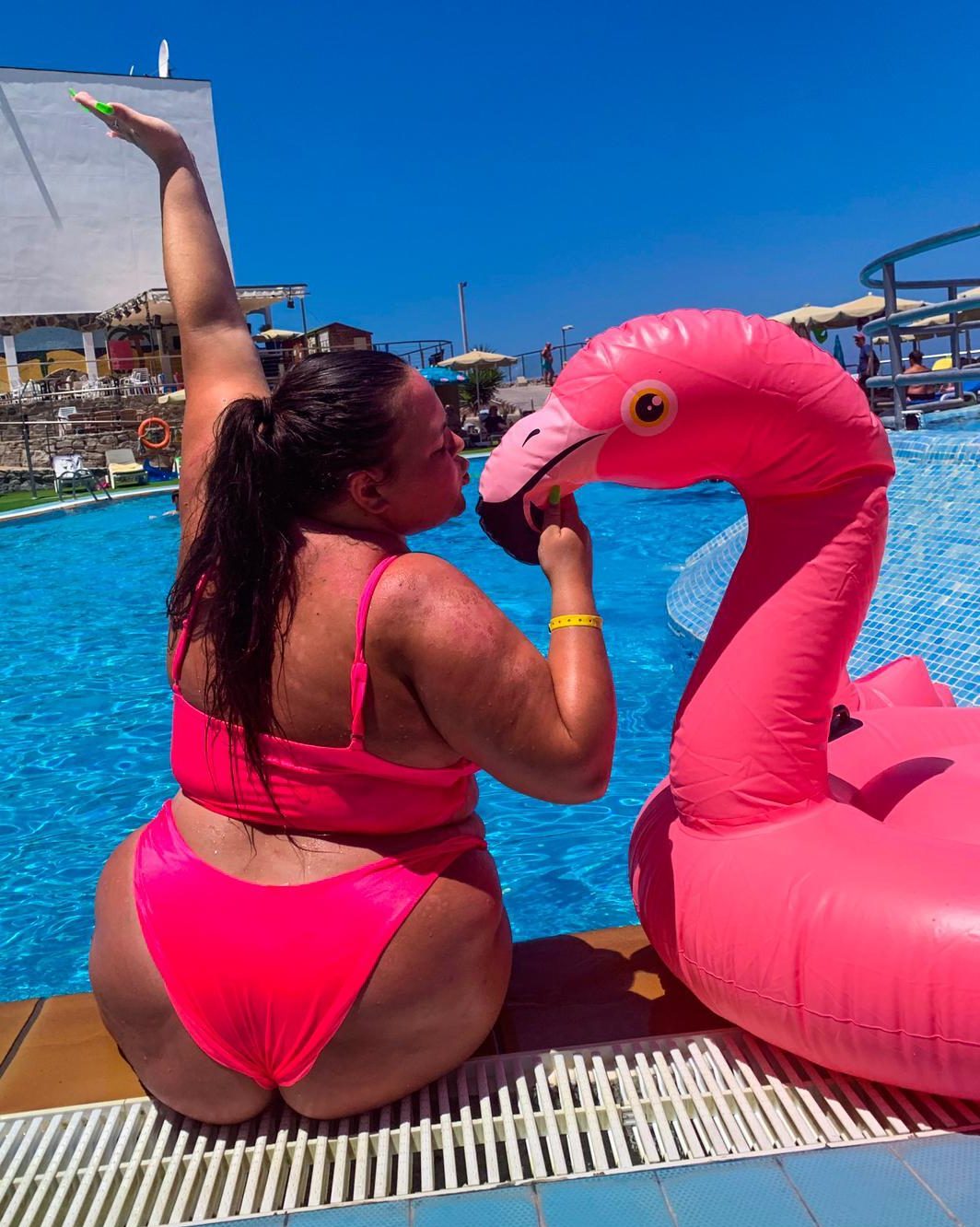 By the end of our two week holiday, I’d been topless on the beach, at the villa and even by a stream during a hike. I felt liberated and alive. My self-esteem rocketed.

Since then I’ve become a topless sunbathing convert. I’ve never had anyone tell me to cover up.

The fact men can sunbathe without a shirt on but women can’t makes me furious.

I hate there is a double standard at play and women of any body size are made to feel ashamed of their nipples and breasts. 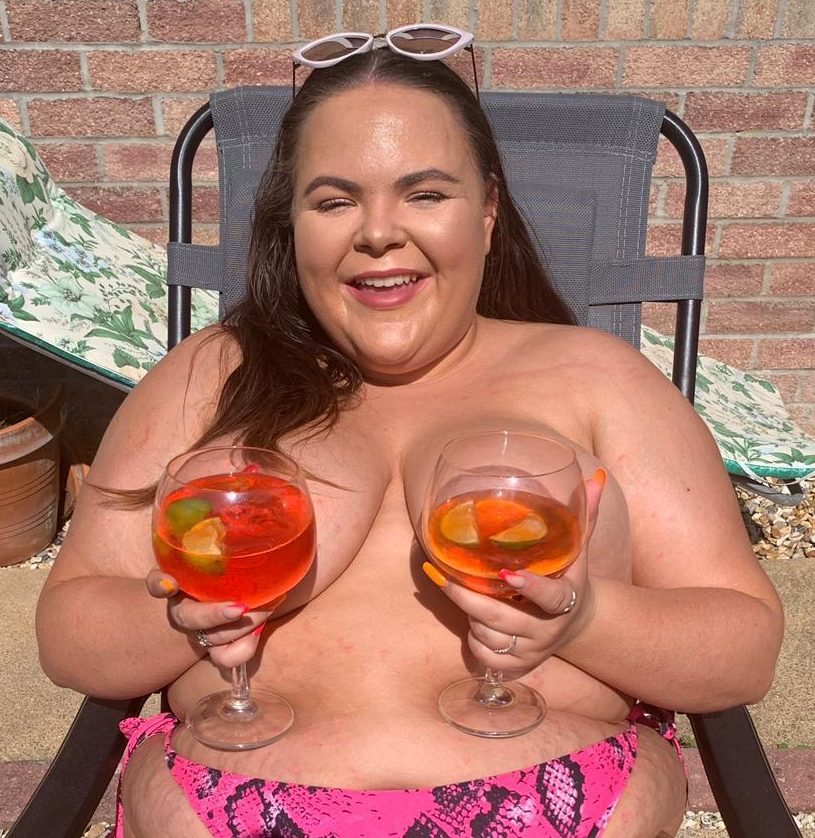 Boys I’ve dated have loved my confidence and say it’s sexy a curvy girl is so proud of her breasts. Many have said they wish skinny girls were as proud of going topless as I am.

I now absolutely love my boobs and their shape, and encourage all women – whatever their dress size – to dare to bare.

Hannah Read is a 26-year-old youth employment adviser from Walton-on-Naze. She started sunbathing topless four years ago and has even been to a nudist beach. 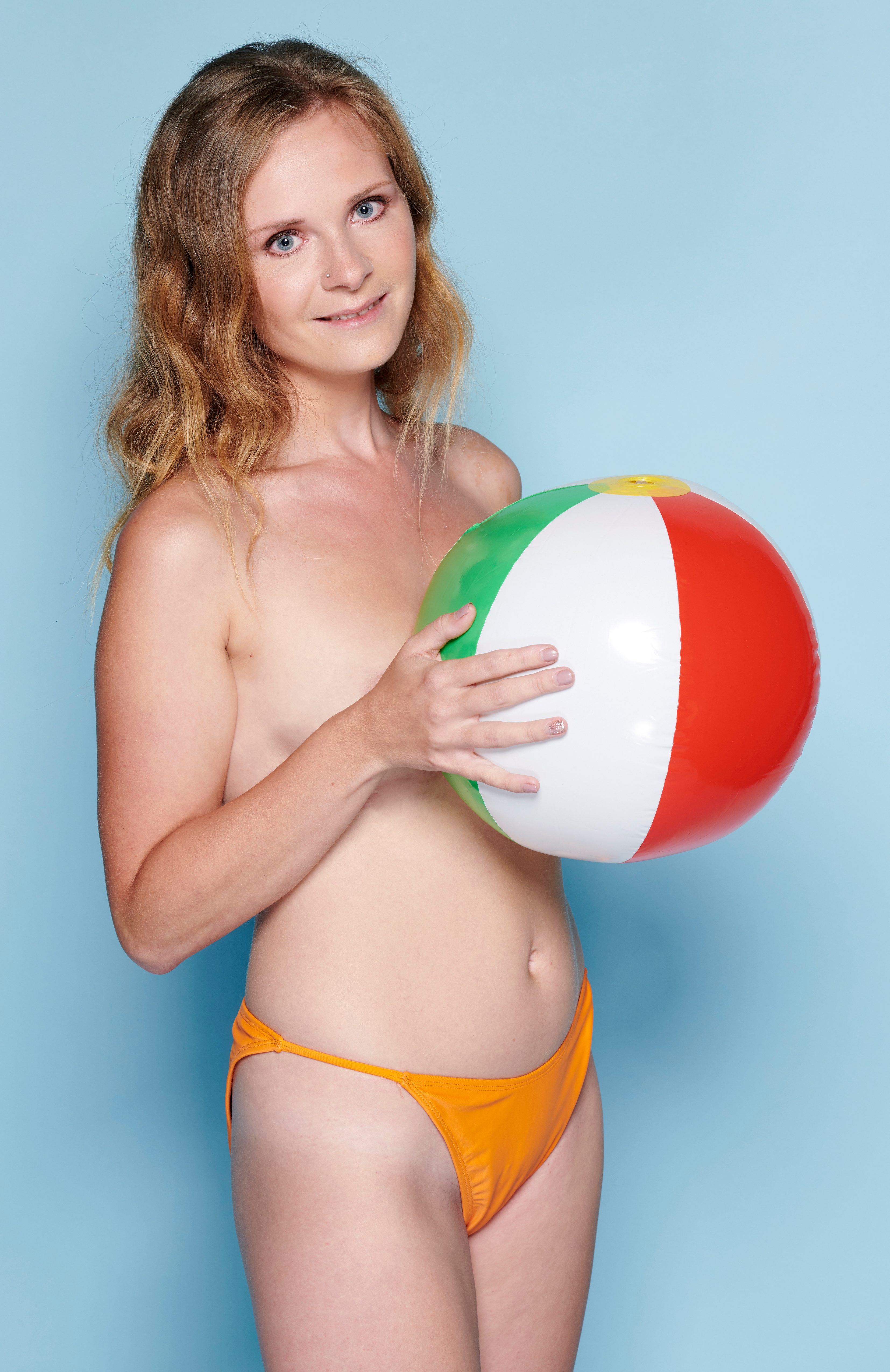 I’ve always loved sunbathing but the thought of going topless and revealing my 32DD breasts terrified me.

Then, six years ago I started dating Paul, 32, a data analyst. He had always told me I have a great body and helped boost my self-esteem.

We booked a two-week holiday to Fuerteventura and I was stunned that everyone around me was either topless sunbathing or hitting the nudist beach.

Feeling the sun on my naked chest was amazing. I felt more liberated than ever

With Paul’s encouragement, I decided to face my fears and remove my top. I was nervous at first but half an hour in I realised no one was staring, pointing or, quite frankly, gave a damn.

Feeling the sun on my naked chest was amazing. That day, despite a spot of sunburn, I felt more liberated than ever before.

I looked in the mirror and realised my tan made my body look and feel great. The next few days we hit the beach and I’d spend the entire day topless. 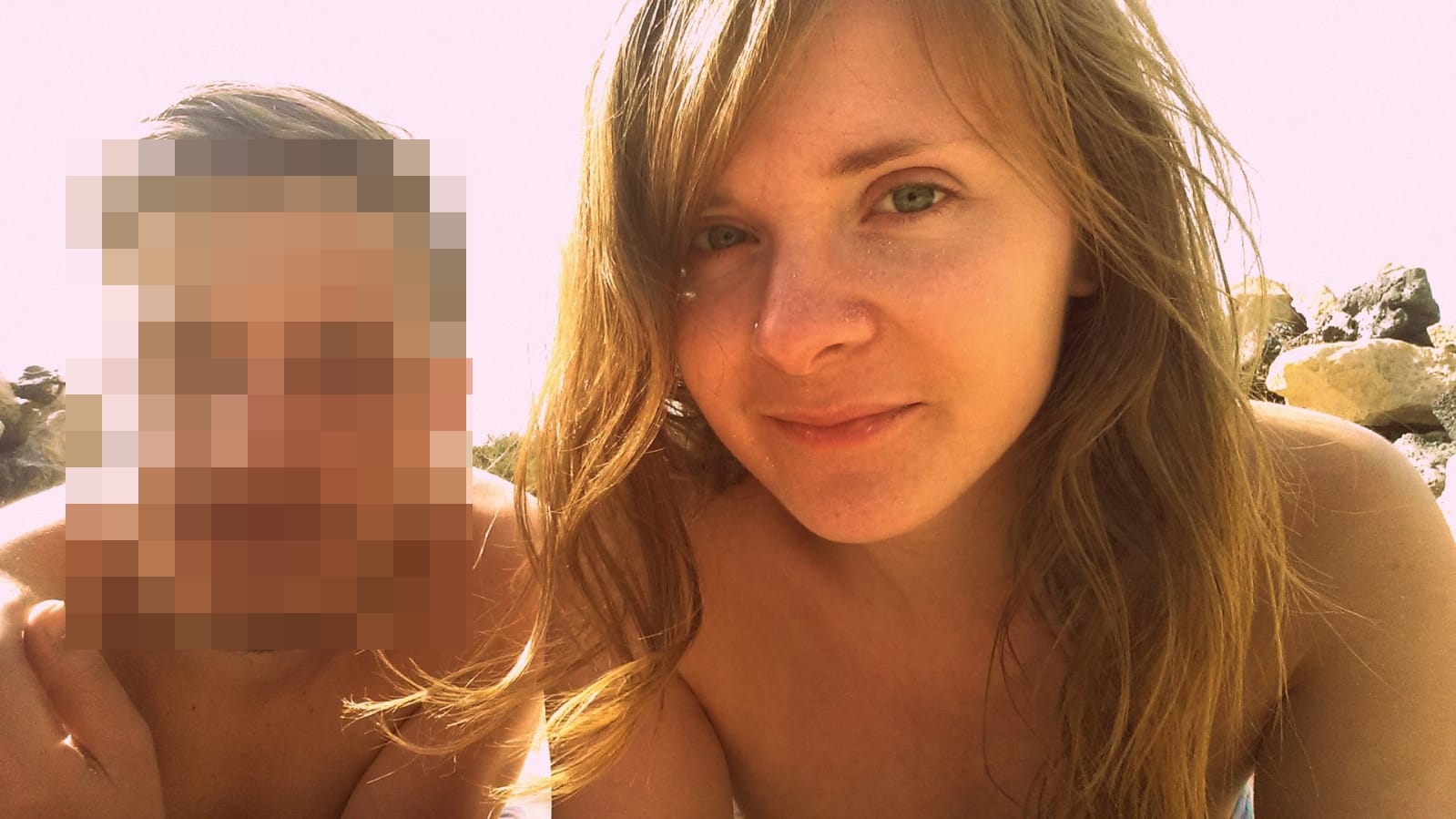 Everyone else was doing the same. Kids were happily running around me and families were having fun. It was a safe and body positive environment.

Swimming topless was a refreshing experience. I felt totally immersed in the water without a top getting in the way.

After the first week both Paul and I decided to give a naturist beach a go. I felt so confident about my topless success we decided to try naked sunbathing. Again, no one batted an eyelid. 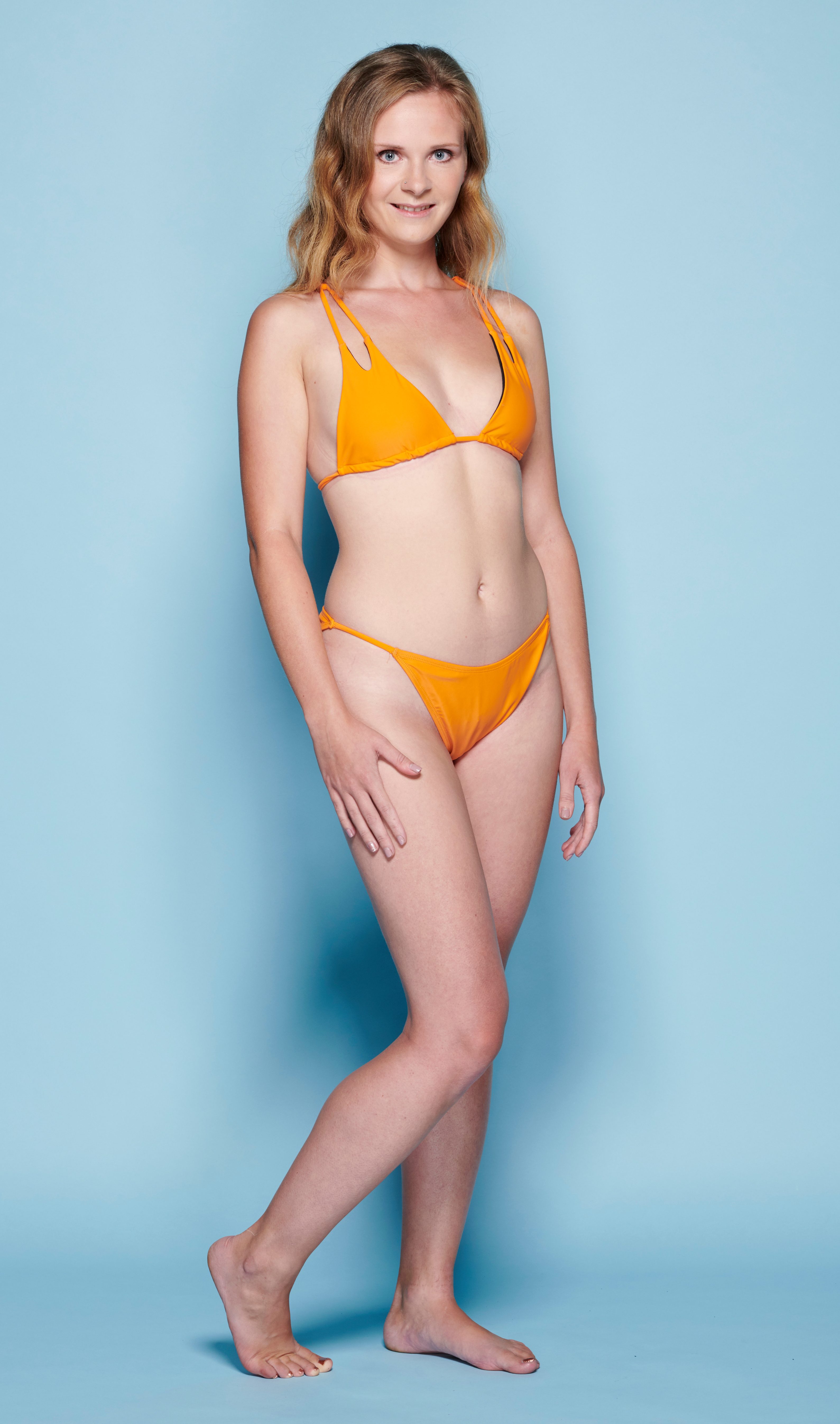 Instagram, with all its filters and editing functions, makes us very judgemental, but stripping off makes you realise judging people because they don’t have the perfect body is wrong.

It teaches you to appreciate different shapes and figures. I’ve seen everyone from a size 16 granny to a petite 20-something bathe nude.

There is something about an all over tan that makes you feel healthy and in a weird sense 'dressed by your tan'.

I’d encourage any woman no matter how old or what size to try sunbathing topless once.

It’s healthy, you get a great dose of Vitamin D and most of all get a chance to celebrate your body in the sunshine.

Just remember use a great sunblock – no one man or woman wants sunburned breasts.

And, here's everything you need to know about going topless in the UK.