When Nina Ricci, the brand of L’Air du Temps, announced that its most recent creative director appointments would be two relative unknowns — Rushemy Botter and Lisi Herrebrugh, ages 34 and 29, respectively, who share a men’s wear brand and Dutch/Caribbean roots — it seemed a desperate bid for millennial relevance.

After all, this was the house defined by fluttering femininity, and the duo had made their name by winning the Grand Jury Prize at the 2018 Hyères fashion festival with a collection that featured inflatable fish.

On the other hand, for the last very many years, other, more established designers had been trying to inject that je ne sais quoi into Ricci clothes, with only occasional success. Maybe it called for something radical. There are times when you have to break those eggs.

On Friday, however, in their first collection for the brand, Mr. Botter and Ms. Herrebrugh only cracked them.

Built on the tailoring that may be their comfort zone, they combined swingy, slightly oversize jackets and the wide-legged trousers that seem ubiquitous this season with shirts and flirty little cocktail dresses that wrapped round the body and ended in a fillip at one hip. 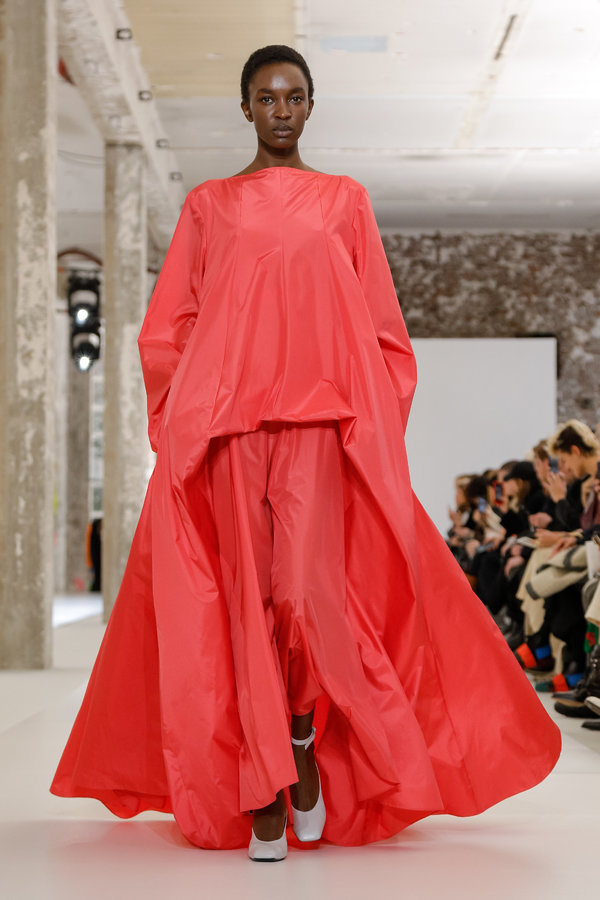 There were technical knit maillot-like turtleneck bodysuits in primary colors cut high on the hip with “Nina” in big block letters on the nape; big, bottle-like hats that extended the silhouette; sheer bubble-wrap dresses that stood in as a new kind of lace; and apronlike skirts with silver grommets layered over the trousers and under lace-up tops. For evening, there were floaty parachute-silk dresses with open backs.

There were also some unexpected salty details, hinting perhaps at what is to come: trompe l’oeil swimsuits seamed into the front of coats and jackets, instead of lapels, for no apparent reason (they were supposed to be a reference to the designers’ backgrounds, but since most people don’t know them, it really served only as an inside joke); arms on jackets cut to look as if the shoulder blades were being pulled together in a model walk (that idea worked pretty well).

Mr. Botter and Ms. Herrebrugh made a perfectly tasteful omelet. Maybe next season, they can try for eggs Benedict. With a bit more spice.