Lisa Vedernikova divides her personal history into two eras: “Before Harry” and “After Harry.”

Before Harry, she kept her life mostly to herself, prioritizing her work, she said, often at the expense of her social life.

After Harry, she began to find joy in everyday acts, like making dinner. Come evening, she might choose a wine bar meet-up over a memo.

This is all despite the fact that the very first exchange between Ms. Vedernikova, 26, who is the chief of staff to the publisher and chairman of The New York Times, A.G. Sulzberger, and Harry Khanna, 35, an independent lawyer and a voter protection software engineer for the Democratic National Committee, was, it has to be said, rather awkward.

The couple met in November 2017 at an engagement party at Fedora, a snug restaurant in Manhattan’s West Village. (The restaurant closed last year.) Mr. Khanna saw Ms. Vedernikova standing at the bar. He knew he wanted to talk to her, but he didn’t know what to say. So he said the first thing that came to his mind. Unfortunately, it was this sentence: “You seem like you’d be good with computers.”

But Mr. Khanna was determined. “I just felt like I needed to get to know her better,” he said. So, toward the end of the night, as Ms. Vedernikova was getting ready to leave, Mr. Khanna gave it one more shot. He asked Ms. Vedernikova whether he could buy her a drink. Her response was less than promising.

Still, she agreed to have the drink with Mr. Khanna. Their conversation roared to life when they got onto the subject of politics. Ms. Vedernikova had worked on Hillary Clinton’s 2016 presidential campaign, and she and Mr. Khanna had a hearty debate about whether Donald Trump would win re-election in 2020. By the end of the night, they had exchanged phone numbers.

There was a barrier to their budding relationship: Mr. Khanna lived in San Francisco. He moved there from New York about a year and a half earlier, and had only returned to New York for the weekend of the engagement party. So in the weeks after meeting, he and Ms. Vedernikova communicated primarily over text message. 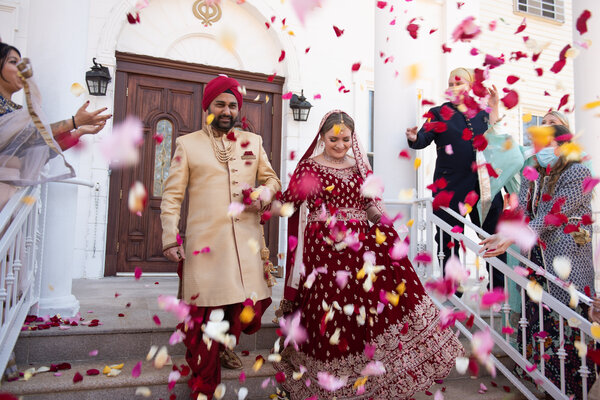 When Ms. Vedernikova’s birthday came at the end of November, Mr. Khanna was the first to text her a celebratory message — even though he was on West Coast time.

The relationship grew quickly from there. The following January, Mr. Khanna made an excuse to visit New York again. He and Ms. Vedernikova met for dinner. When he returned to San Francisco, their regular text message exchanges turned into daily phone calls. That March, they traveled together to Iceland. They started discussing the idea of Mr. Khanna relocating to New York so they could be together, with the goal of an April or May move. Mr. Khanna couldn’t wait; he surprised Ms. Vedernikova by moving back to New York before the end of March.

Before he met Ms. Vedernikova, Mr. Khanna had been ready to put New York City behind him. He had been employed at a law firm there, and had grown tired of “working 100 hours a week and going to the handful of restaurants in the Financial District over and over.” When he moved back to be with Ms. Vedernikova, he said, she introduced him to a “whole new magic of the city.” The couple was engaged at the beginning of March 2020. They committed to a March 2021 wedding, which they stuck with even as it became clear that they would have to plan around the pandemic. “At some point we just had to say, ‘this is the one constant in an extremely uncertain process,’” Ms. Vedernikova said.

They ultimately held a socially distanced ceremony with about 40 guests on March 13 at the Gurdwara Mata Sahib Kaur, a Sikh temple in Glen Cove, N.Y. Bhai Paramjit Singh led a traditional Sikh ceremony, which was familiar to Mr. Khanna, but was a new experience for Ms. Vedernikova.

“The first Indian wedding I had ever been to,” she said, “was my own.”