LOS ANGELES — It’s never too early to start working on your brand. This dictum, at the heart of so much young entrepreneurship, is the guiding principle of the Unincorporated Life, a high-end fashion camp for kids, in Hollywood.

Over the course of a week, students aged 6 to 18 learn how to build and brand a clothing line from scratch: They design and sew outfits; make logos; form a customer profile for their target demographic; and sell their wares (mostly to their parents).

The program ends with a glamorous, highly produced runway show, in which children model their outfits for a rapturous crowd of mothers and fathers, grandparents and siblings — and often, a few celebrities. Kanye and Kim Kardashian West and the graffiti artist Shepard Fairey are among the parents who have sent their children here. 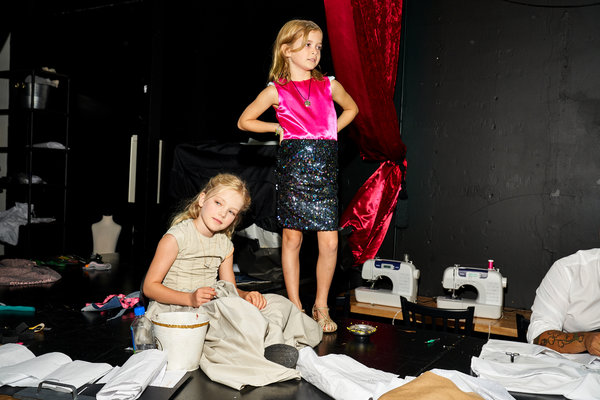 On a recent Thursday afternoon, Karina, 15, showed off the progress she was making on a tan wool-blend coat, inspired, she said, by vintage Coco Chanel and current trends in Milan.

The clothing was designed with a “fun girl” in mind, she added, someone who is “ready to grind, get some work done. The everyday girl that’s just cool, super-chill, vibin’, unique individual.” (A capsule collection she created earlier this year was inspired by vegetables.)

Another campgoer, Parker, 9, said her “Dark Soul” label was inspired by “dark colors and horror movies.” She had spent her week designing an all-black outfit — a crop top and ripped jeans — for a potential client who might like to be scared.

“My customer will wear my garment to a Halloween party and they will feel like they’re in a horror movie,” she said, from the runway.

While most of the young designers make clothing, other students at the Unincorporated Life, where prices start at $850 for a week, take classes on makeup design, personal branding and D.J.ing. Those who attend the “Young Hustlers” program create products to sell alongside the runway show and work with the staff to learn how to price their products.

The makeup students learn about application and experimentation, and create personalized palettes. The D.J.s perform before and after the runway show, working with instructors on their sets.

The lead up to the show was a flurry of activity, with kids and instructors putting the finishing touches on their looks and practicing vision board presentations one last time. One girl dispensed advice to a friend on calming her nerves (deep breathes and circular arm movements).

Once the doors opened, the crowd was treated to performances from DJ Rose, 6, who started off with “Wannabe” by the Spice Girls, and DJ Clawz, also known as Joshua, 7, who said his target audience would feel “creative” after hearing him perform at an electronic music festival like Tomorrowland.

Joshua’s father, the actor James Van Der Beek, watched proudly from the crowd. His daughter Olivia, 8, was also enrolled in the program. She later walked the runway in a gray gown inspired by “Beauty and the Beast.”

“It’s an amazing way for them to find a creative outlet,” Mr. Van Der Beek said of the camp. “I dropped them off here and my daughter immediately ran to her sewing machine, knew exactly where it was.”

“Creative expression saved my life,” he said. “So any way that they can find the tools to express, I think is a huge gift to give a kid.”

The Unincorporated Life started in 2007 as a skate, surf and snowboarding brand founded by two siblings, Shane and Summer Salazar. It slowly morphed into a “luxury entrepreneurial education” experience for children.

The goal of the program is to offer children a mature creative outlet.

“I, for sure, didn’t want to have like small kid chairs and bright colors, that sort of kid company,” Mr. Salazar said. “I wanted to make sure we were high fashion, that whatever we taught and whatever we did, it was always like, let’s blow it out of proportion, let’s take it to the next level.”

“We essentially created an experience that we would have absolutely loved,” he said.

Mr. Salazar and his sister employ a team of instructors who help the students every step of the way. While the kids design outfits and choose their fabrics, the staff teach them how to sew and cut patterns.

Richard Sun, the creative director of the Unincorporated Life, said: “When you’ve never worked with kids, you don’t really know how kids really think. But then being around and working with so many kids, it always surprises me, their limit of not having a limit.”

He added: “They’re always the first ones to create something new and innovative.”

Truett, a 10-year-old who was visiting from New York City with his family, designed personal body wipes branded “Killer Clean,” which retailed for $30 for a small container and $40 for a large. Russo, his 7-year-old sister, spent the week working on a silky dress stitched with stripes of pink.

“Last week they were in acting class, and this week they’re in design camp, and next week they’re in surf camp,” said their mother, Reagan Nunnally, who works in tech and media sales. “We wanted them to have a whole L.A./Hollywood experience and just get a flavor of it.”

And no experience of Hollywood would be complete without some glamour. Earlier in the week, Mr. Sun, the creative director, had taught students to model, telling them to “hold your poses and make it a show.”

The advice clearly stuck. Throughout the afternoon, young designers, D.J.s, makeup students and entrepreneurs alike strutted down the runway and struck several poses. Some kids blew kisses or flashed peace signs. Most of the boys dabbed.

Priscilla, 6, who had paired a long, billowing red gown with sneakers, said that her dress didn’t turn out exactly as she imagined but “it just ended like this and I really liked it.” The mix of high and low fashion, she said from the stage, was inspired by Valentino couture.

The crowd was audibly impressed. Her parents were surprised as well.

“I was so impressed at how much she knew,” her mother, Lisa Neman, said later.