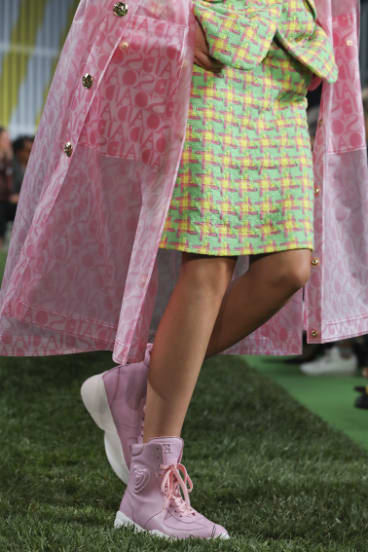 Way back in the wild days of fashion yore, in January 2014, Karl Lagerfeld held a couture show set in a fictional Cambon Club (like the Cotton Club, but not), complete with a full orchestra and grand, sweeping staircase, down which his models tripped in gossamer, bejeweled creations, each one complete with its very own custom sneakers.

Sixty-four different sneakers, with approximately 30 hours of handwork in each, courtesy of the couture shoemaker Massaro. Designers had flirted with sneakers before, including Yohji Yamamoto and Rick Owens, but because this was Lagerfeld, who does nothing halfway, and because this was couture — the fanciest, most elitist kind of fashion — the choice was taken as a major cultural signifier. As opposed to, say, a shoe.

It was hailed as a breakthrough.

Oh, how we eat our words. 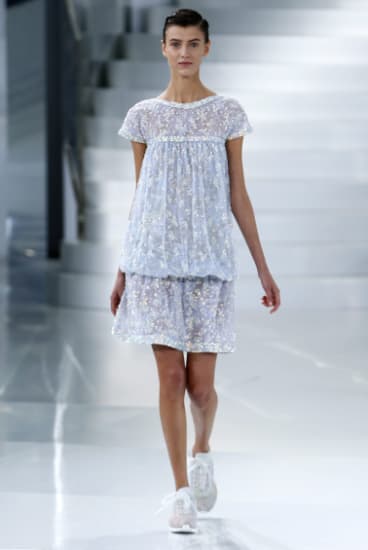 Karl Lagerfeld turned sneakers into couture at his Paris show for Chanel in 2014.Credit:EPA

Four-and-a-half years later, the fashion sneaker phenomenon has reached the point of absurdity. As marketing executives the style world over have become convinced that every single brand has to have a sneaker in its footwear arsenal, and the pressure is on to up the ante with each new design — to make it crazier! and bigger! and artier! (and, sometimes, uglier) — the form has begun to flirt with being a parody of itself.

During the recent runway shows, there were sneakers at Versace: on a chain link rubber sole, either boatlike in size or reduced to Velcro sandal straps, like a cross between Chacos and a rapper necklace. Sneakers at Cavalli: giant, silver, with spaceship bottoms. Valentino made sneakers: nurselike, with detachable feathers.

So did Coach (metallic, with a loafer fringe), Tory Burch (canvas, with contrast laces and soles) and Escada, for its New York runway debut: candy-colored high-tops with quilted hearts on the ankle, seemingly sourced from a pick 'n' mix shop.

And it didn't stop there.

Gherardo Felloni, Roger Vivier's new creative director, introduced the Viv' Run, a shoe not remotely made for running (as even he admitted), in multiple colours with a giant signature diamanté buckle and inbuilt heel, so the shoe is actually a seven-centimetre semiwedge.

Then Jimmy Choo unveiled the Diamond sneaker, with the "silhouette of a vintage racing shoe, superimposed into a Diamond-soled footprint" that had been created using a special plastic mould that encloses the actual sole, all of it adorned with Swarovski crystals.

Some of these shoes are great. But many of them, the ones most often referred to as "dad shoes", really look more like Frankenstein monsters of the foot, cobbled together from references and peer pressure, unwieldy and aggressively clumpy. They don't free the wearer to take flight. They weigh her down. 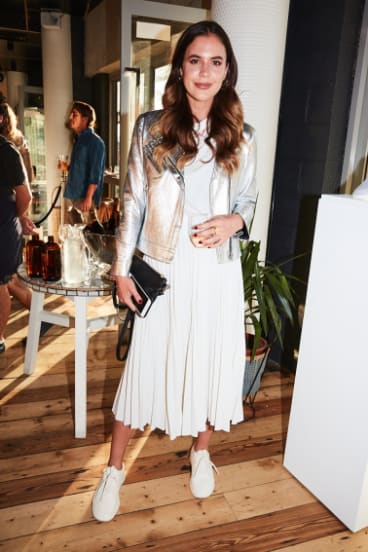 Influencer Ally Hayward pairs a dressy dress with sneakers at an event for Allbirds in Sydney.Credit:Chloe Paul

So while Rati Levesque, the chief merchant of luxury resale site TheRealReal.com, said that women's fashion sneaker sales are up 35 per cent year on year, and while Beth Goldstein, the fashion footwear analyst for the NPD Group, said that designer sneakers are the number-one growth area in the entire footwear space for men and women, it's hard not to wonder: Who's really the sucker here?

Are sneakers the Dutch tulips of the early 21st century? Have we reached peak sneaker ridiculousness?

"I have a bet with Sebastian Manes, the buying and merchandising director of Selfridges, that we are at the top of the trend and the pendulum is about to swing back," said Neil Clifford, the chief executive of Kurt Geiger Ltd., which owns four shoe brands and also administers the shoe departments of Harrods, Selfridges, Brown Thomas and Liberty of London.

"In every merchandising meeting we are asking ourselves: 'Do we have enough sneakers? Should we buy more sneakers?'" he said. "But things change, and they always change quicker than you think."

Goldstein of NPD agrees. "I think it will slow," she said.

It took a while to get to this point, after all. Prada introduced its first sneaker in 1996. Adidas brought on Yohji Yamamoto and Jeremy Scott as collaborators in 2002. Lanvin introduced its sneaker in 2005 — and Michelle Obama got flak for wearing her designer pair in 2009, which was the same year Vuitton enlisted Kanye West to help the brand with a sneaker.

The force behind this, all armchair analysts agree, is the rise of streetwear and comfort dressing: athleisure, leggings, hoodies. As the world and workplace get increasingly casual, so, too, the footwear. Though the sports brands (Nike, Adidas, Puma) were the first to see the possibilities in combining our yen for a sneaker wardrobe with the planned obsolescence of fashion, the brands themselves soon cottoned on to the possibilities of the style, and the money to be made. And they are expert at framing an accessory as a totem of aspiration and desire.

Besides, it is true that once you trade in your stilettos, it is very hard to go back. Serena Williams wore her sneakers to Meghan Markle's wedding after-party under her Valentino gown — and then she Instagrammed them for all to see. (Not to mention her own wedding party. Remember her bedazzled Nikes?)

"One of my challenges when I started was how to make the brand true to itself but also contemporary," Felloni of Vivier said of why he had decided to make a sneaker one of his first product statements.

"Not everyone wears a running shoe, but probably 99 per cent of women do. The world is moving in that direction."

According to Josh Luber, the co-founder and chief executive of StockX, a sneaker resale platform that bills itself as the Nasdaq of commercial products: "Almost everyone has come to sneakers at some point, because they touch on all buttons: retro, arty, fashion, performance, influencers. They are the democratizer of celebrity. I can't fly on Jay-Z's jet or buy the same car, but I can wear his shoes.

"People have been asking me about the sneaker bubble for years now," Luber added. He doesn't believe it's popping anytime soon.

But now that we are in a situation where the sneaker has become so removed from its original purpose (freedom, functionality) that it has become an end in itself, it may finally be deflating. When designers are making a sneaker just because they think they have to make a sneaker — because they are trying to carve off whatever slice of the sneaker market is possible — as opposed to because it makes sense for their brand, or their shopper, it's time to stop.

"There's one thing we know: People get bored," Clifford said. "Whether change is driven by political winds or commercial concerns, it happens. I think there is a return of formalization on the horizon, and that means pumps and high heels. My prediction is 2018 will be the acme, and the backlash is about to begin."