‘It is my mission to guide humanity to a higher consciousness’: Meet the 36-year-old woman who believes she is an ELF – and says she was sent to Earth to act as a ‘spiritual teacher’ for humans

Meet the woman who lives like an elf – and even believes that her consciousness has not come from earth and that she has been put on this planet to help humans become elves themselves but says elf ears are optional.

YouTuber and spiritual teacher, Kimberel Eventide, 36, from Illinois, identifies as a Pleiadian Starseed, a person who has past memories and connections to other lives on other planets that allows them to help humanity while living on Earth.

Kimberel, who is also referred to as an Otherkin, someone who identifies as something other than being human on earth to assist humans in spiritual matters, first began identifying as an elf after feeling a connection with Tolkien’s fictional characters after reading and watching the Lord of the Rings series of books and films. 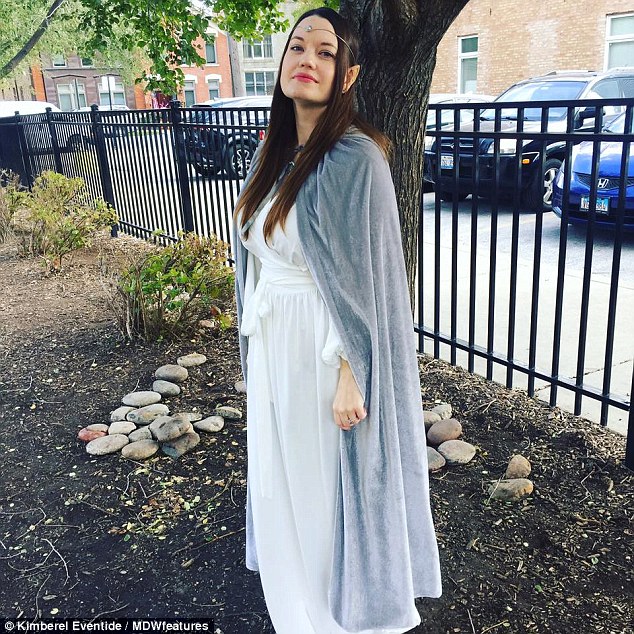 Higher being: Kimberel Eventide, from Illinois, believes herself to be a High Elf 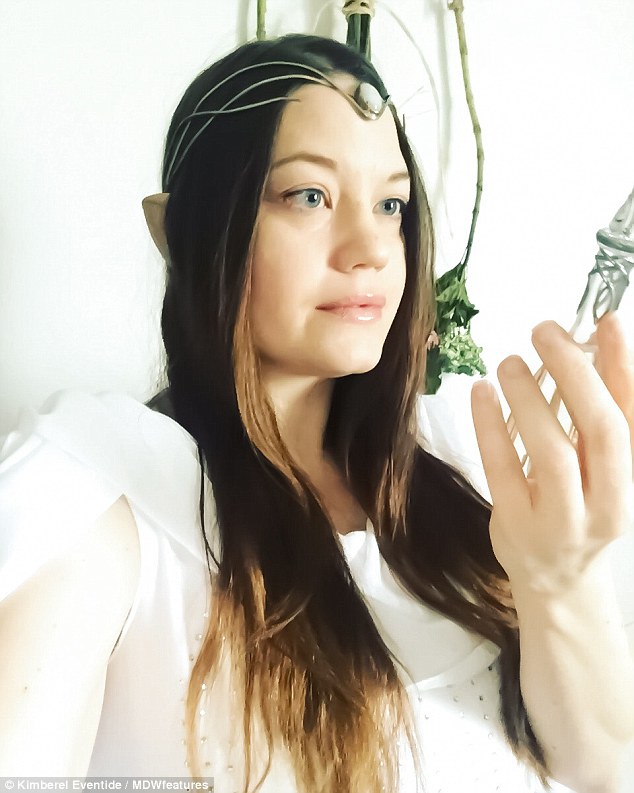 Spreading a message: The 36-year-old says she was put on Earth in order to guide humanity into ‘higher dimensions of both perception and experience’

Prior to identifying as elven, Kimberel had been a spiritual teacher for eight-years but says she was called to the elven realm after reading and watching Lord of the Rings, and found she had a deep connection to the elves created by J. R. R. Tolkien and felt like she belonged in Middle-earth’s Rivendell or Lothlorien and not in a world surrounded by other humans.

Kimberel spends her time dressing like a High Elf as much as she can, wearing silk, velvet or ornate, nature inspired clothing. As well as this she has five pairs of elf ears and cuffs that she wears but her own ears are naturally slightly pointy, so she doesn’t feel the need to wear her ears all the time.

Kimberel is a city-dwelling elf but she tries to connect with nature wherever she can and surrounds her home with plants. Friends and family have been very supportive of Kimberel’s journey, especially her husband, who she describes as the Aragorn to her Arwen. He does not consider himself to be anything but human nor fully understands Kimberel’s beliefs yet supports her.

Kimberel has a mission called, ‘Projectelvenstar’, to help humans transform into high elves.

‘I ultimately believe in Oneness and that we are all from the Prime Source of the whole Universe that is the Universal Mind, but I think what really describes me best on earth now in this physical body is that I am a Pleiadian Starseed,’ she explained.

‘Usually starseeds are creating blogs, writing books, on YouTube, making Facebook and social media sites to push higher consciousness and wisdom to the forefront of human minds in today’s world.

‘You will never find a starseed just simply living a “normal” human life – we have human ascension and transformation on our mind constantly. 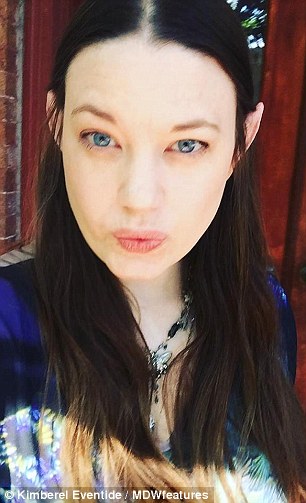 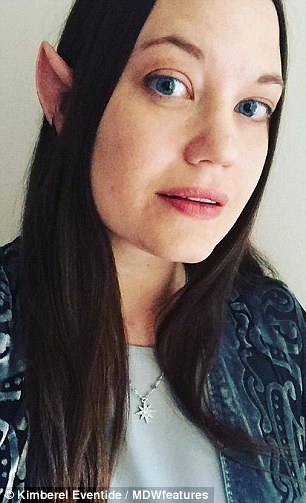 Helping hand: Kimberel has a mission that she refers to as ‘Projectelvenstar’, which she says focuses on helping humans transform into high elves 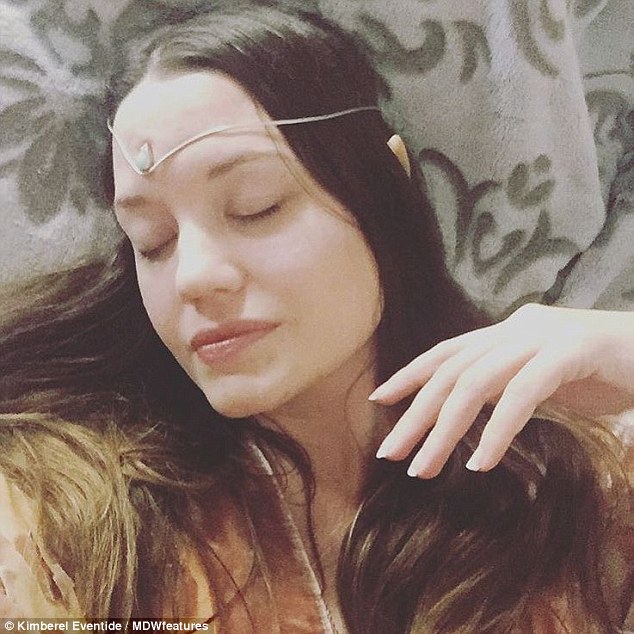 Transformation: She tries to spend as much time as possible dressing as a High Elf, wearing silk and velvet robes, and modeling one of her five pairs of fake pointed ears

‘I am also known as an Otherkin, a person who identifies with something else besides being just a human. As many of you can already tell, our perceptions of being human is changing and expanding to include different genders, identities, and now Otherkins.

‘I am more specifically an Elvenkin, a person who identifies with Elves & the Fae in general within the Otherkin community.

‘I dress as a High Elf as much as I can; velvet, silk, ornate detailed, or nature inspired clothing, and especially so on YouTube. I have about five different types of Elf ears and cuffs I wear, plus my own ears have a slight point to them so I don’t always wear my ears.

‘I am an Elven spiritual teacher who offers personal Skype online sessions to help individual souls. I also create YouTube videos as my way of helping people elevate their consciousness levels to get them in touch with the High Elven personality of Tolkien’s Lord of the Rings or just higher consciousness in general.

‘I offer guidance to other Otherkins, and starseed souls who feel they resonate with something other than being human and how to cope with being in this world.

‘I have a mission inspired by the Pleiadian Elves and I call it Projectelvenstar. It’s specifically to help humans transform themselves into High Elves – ears are optional but can become a by-product of becoming extrasensory and hearing better over time.

‘Regardless of ears, I believe humans can act, think and become as wise as the elves of Lord of the Rings did in the Third Age. It is a growing up of humanity in a natural way that I am after. 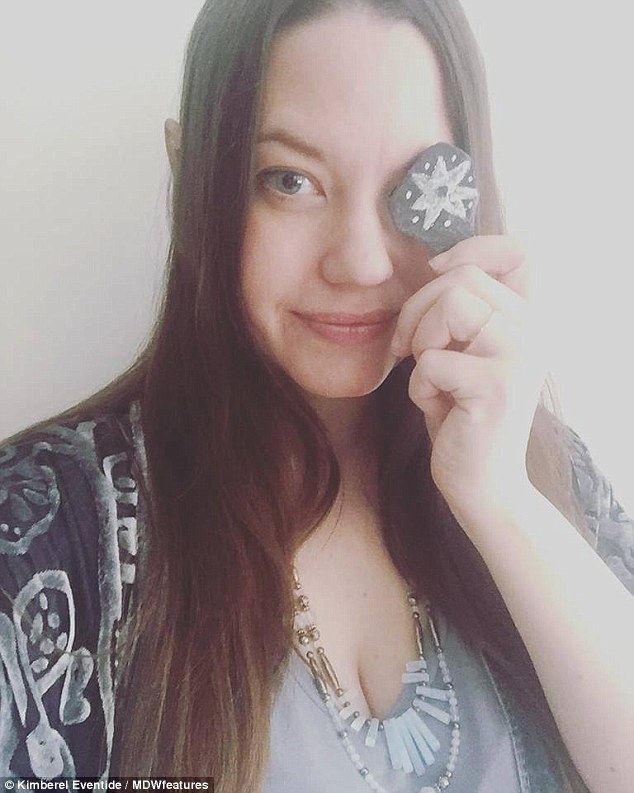 Supportive: Kimberel is married, although her husband does not identify as an elf 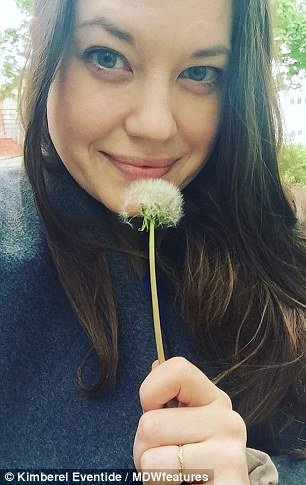 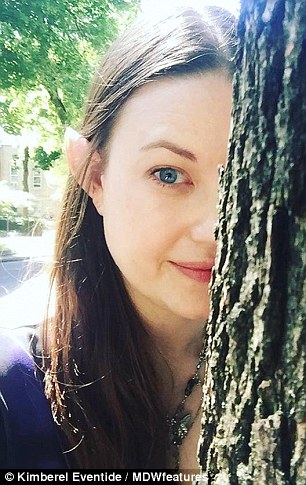 Bond: ‘My husband is very much like Aragorn and I am his Arwen,’ she says of their relationship – referring to a human and an elf who fell in love in Lord of the Rings

‘I want humanity to grow up organically and move forwards into a brighter age of experience that lives peacefully with nature and has advanced technology for all to experience.

‘This is my major mission, to guide humanity into the higher dimensions of both perception and experience.

‘My friends are supportive of me as they all knew this is who I always was deep down inside. My husband is very much like Aragorn and I am his Arwen – he is a human soul or at least does not consider himself to be anything other than human in this lifetime.

‘He loves and supports me in this project. He does not understand it and does not watch many of my videos, but he knows who I am and loves me for it. I get no resistance from him except when my filming cuts into our time together.

‘That is the balance I am trying to achieve – helping the world reach High Elven consciousness and at the same time trying to have a family with him.’

The Pleidian Elf is a subcategory of the Pleiadian Elves who are nature orientated beings who exist at one with nature and advances in technology.

After being called to the Pleiadian Elves, Kimberel set up a Facebook group, The Elven-Light Path, to inspire those who are interested in being more elven and even has a YouTube channel, High Elven Wisdom and Love, that sheds light on how to apply elf behavior to everyday life.

She also wants to show humans how they can use a higher sense of consciousness and healing to move forward in their lives.

‘I was called to it. I have always resonated with the Elves of Lord of the Rings, ever since reading the books and watching the movies I felt I belonged in Rivendell or Lothlorien and not with other humans at all,’ said Kimberel. 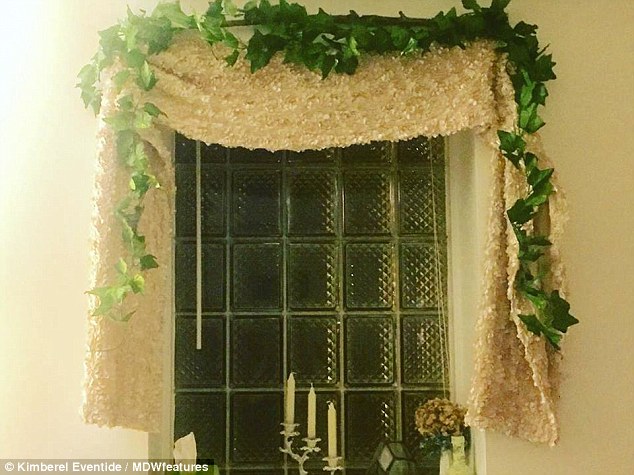 Lifestyle: Kimberel tries to embrace her elven personality in all aspects of her life, even decorating her house so it has a Lord of the Rings feel to it 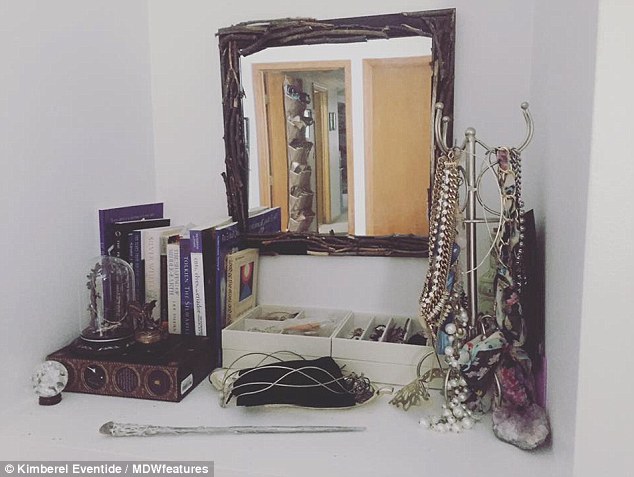 Priorities: She says her relationship with nature is incredibly important, and tries to bring the outside world into her home wherever she can, even using twigs to decorate her home 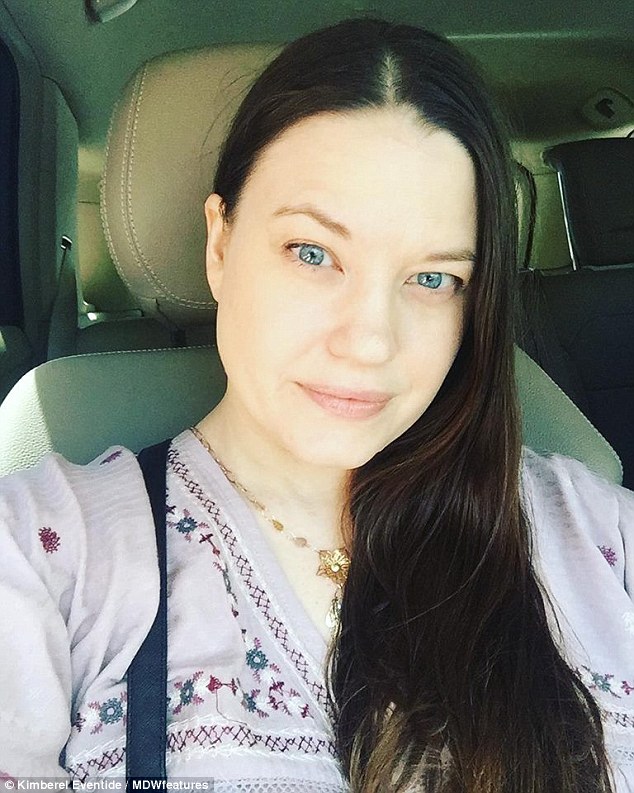 Natural: Although she has five pairs of pointed ears, Kimberel says her own ears are naturally slightly pointy, so she doesn’t feel the need to wear the fake ones all the time

‘One of my spirit guides was a Pleiadian woman who looked much like Galadriel in Lord of the Rings, and I received messages from my intuition to say it was time to bring the Elven personality into reality, more than cosplay and just in fantasy.

‘It was time to show that humans could become just like the High Elves of Tolkien’s stories and in doing so would be evolving closer to what the Pleiadians are as beings today, into our future.

‘My personal journey has been a very exciting one and difficult at the same time. I have always wanted to help humans reach a higher potential within.

‘After observing reality TV and the way humanity behaves in general towards one another, I have always felt like there was another way of living that could speak to the higher ideals within the High Elves of Tolkien.

‘I feel as weary as the Elves of Lord of the Rings did in the Third Age when they were all leaving Middle Earth to sail to the Undying Lands. When my own time comes to leave this earth, I will be happy and at peace to rest.

‘My soul feels weary from seeing humans slowly, very slowly, move towards the society I believe they can have where everyone behaves like the High Elves. I am both patient and impatient at the same time, and it often causes a deep sorrow and burden within me. 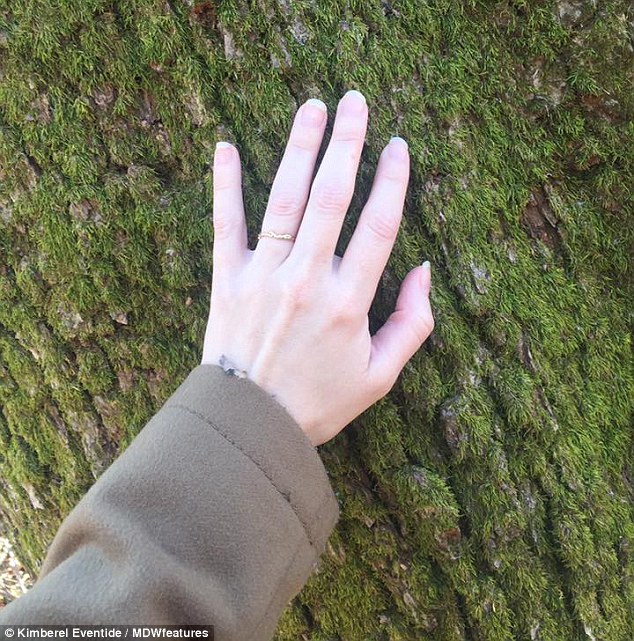 At one: Kimberel lives in the city, so she seizes upon every available opportunity to connect with nature 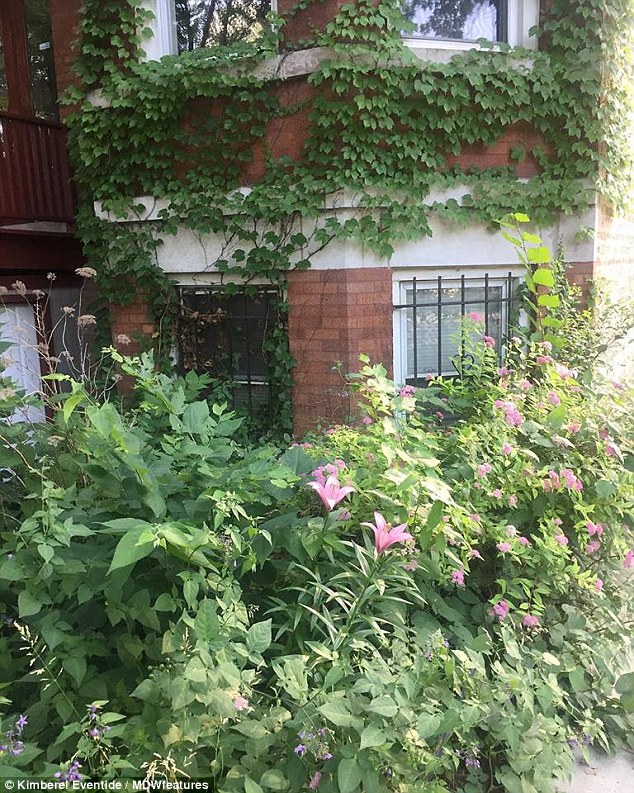 Atmosphere: She also surrounds her home with plants in order to stay as close to nature as she possibly can

‘But I help others because I am part of this story and this is the role I choose to play throughout it. I have had a difficult childhood, but I love my life now and would not change it for anything. I want to teach others how to overcome all of their problems as I did.’

For Kimberel, the most important misconception she wants to break is that people don’t have to look like elves physically to connect with them and explore the realm and how it could combine with their life. She says that anyone from any background can have an elven soul.

‘One of my main messages throughout my channel is for humans to not think that they could become more Elven-like because they don’t look like the Elves of Tolkien or the Pleiaidans superficially- as tall, fair, and graceful Elfin beings,’ she added.

‘While it is fun to dress elegantly like them and emulate them as much as you can in physical looks to inspire others, as I try to do by wearing clothes and Elven crowns.

‘I even have an Etsy store named The Modern Elf Boutique that gathers Elven style jewelry, clothing and accessories in an online boutique for those who want to surround themselves in Elvish things and I plant trees with the proceeds, you can look like anyone and be an Elf.

‘Elves can be any colour of skin, from any country, and have any past background story. It is about the mind and the heart you have that makes you more Elven like.

‘If you love nature, animals, the faeries, and also are a strong warrior of higher consciousness, then you will always be an Elven soul or can transform yourself into an Elf in the near future.’