Warning: spoilers for The Handmaid’s Tale‘s season two premiere below!

Ready or not, The Handmaid’s Tale has plunged us back into the frightening world of Gilead. I mean, at this point even just seeing the color red sends me into an anxiety spiral. That being said, the first two episodes of Hulu’s dystopian drama are as brilliant as ever. The first season spends most of its episodes introducing us to the major players and building up to Offred/June’s potential escape in the finale, and the season two premiere, “June,” wastes no time in answering the question on all of our minds: is that actually June’s escape or is she sent to her death? If you need a little help catching up on how season two kicks off, we’ve highlighted everything you need to know below.

I’m sad to report that no, the van June is thrown into at the end of season one is not her path to salvation. Instead, it’s her path to a dilapidated-looking Fenway Park that Aunt Lydia has turned into a horror show. After getting a muzzle strapped around her face, June and a number of other handmaids are led to the overgrown baseball field, where a gallows is waiting for them. The women are then forced to step up onto the platform and have each of their heads shoved into a noose.

As Kate Bush’s “This Woman’s Work” plays in the background, we see the handmaids come to a reckoning with the final moments of their lives: some whimper, one girl pees her pants, and June spends a long moment staring up into the sky. Then, one of the soldiers who rounded up all the handmaids pulls the lever, and . . . nothing. Aunt Lydia steps out from the shadows reading scripture and announces the whole situation is a punishment for refusing to kill Janine in the previous season. “Let this be a lesson to you,” she warns. (This also includes a great voice-over from June: “Our Father, who art in heaven — seriously? What the actual f*ck.”) 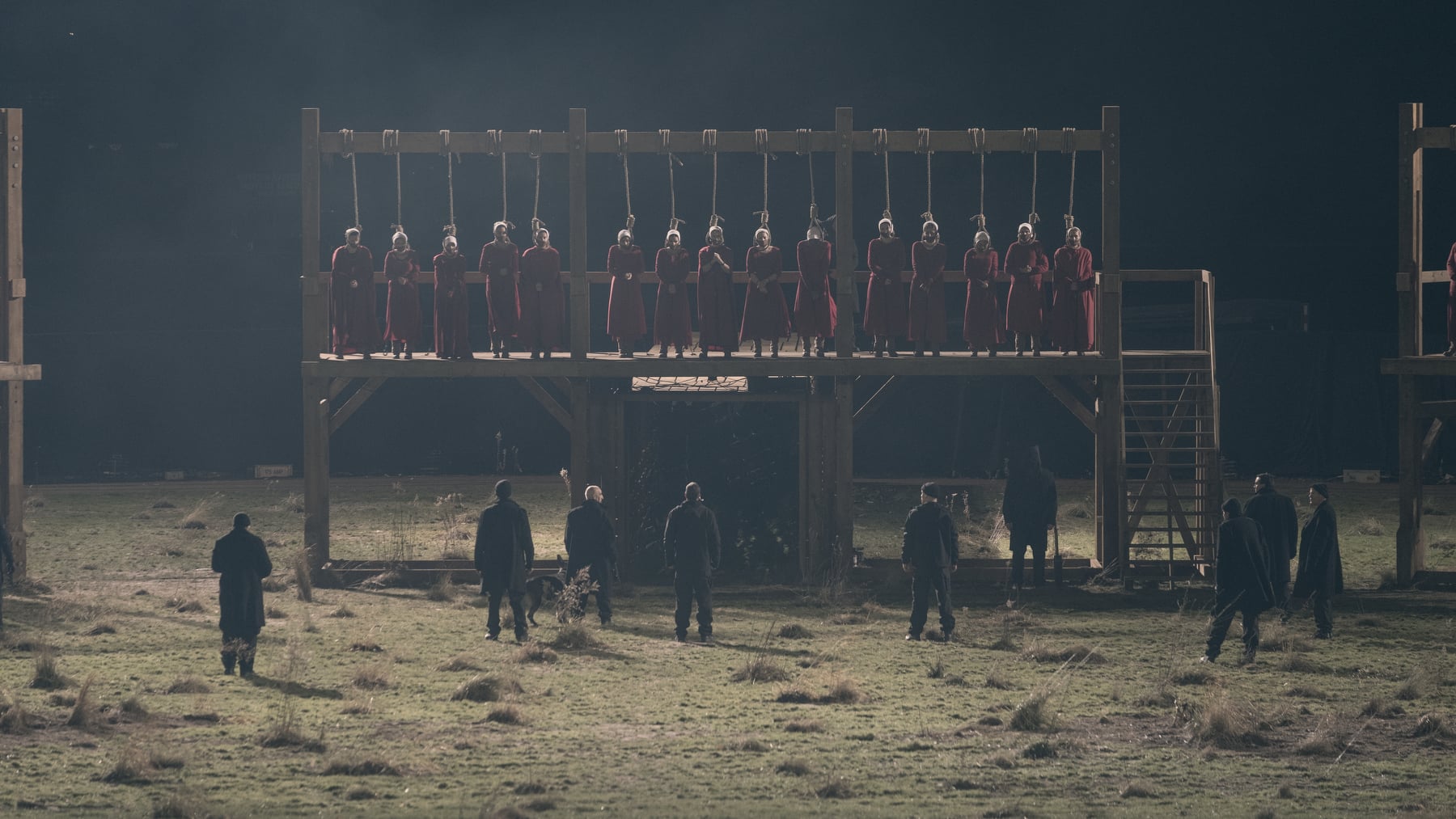 2. June Returns to the Red Center

After the incident at Fenway, June and the rest of the handmaids are brought to the Red Center and made to kneel while holding rocks in their outstretched arms in the pouring rain. As soon as Aunt Lydia finds out June is pregnant, however, she immediately halts her punishment and brings her inside to warm up and eat a meal. June, forever rebellious, refuses to eat. “Such a brave girl, standing in defiance but risking nothing,” Aunt Lydia says of her disobedience before parading the other handmaids into the room.

One by one they’re handcuffed to the kitchen stove and forced to hold their bare hands over the open flame as June sits there and eats. In other words, it’s the stuff of straight-up nightmares. June is also taken to a dirty room to see what happens when a pregnant handmaid disobeys: there, Ofwyatt is chained up with only a bed on the floor to keep her company (apparently she attempted to kill herself and the baby by drinking drain cleaner).

In this look back at life before Gilead, June and Luke are having a discussion about having another baby or staying on the pill (apparently she’d need his signature to get more medication since he’s a dude). In the midst of their busy morning, June decides to give Hannah some medicine since she’s feeling feverish, sends her to school, and heads off to work.

Soon June is called to the hospital, where Hannah is being held. Apparently it’s against the law to send sick children to school (since children were a rarity back then), and a rude-as-hell nurse chastises June for having a career (and vaguely threatens to have Hannah taken away). 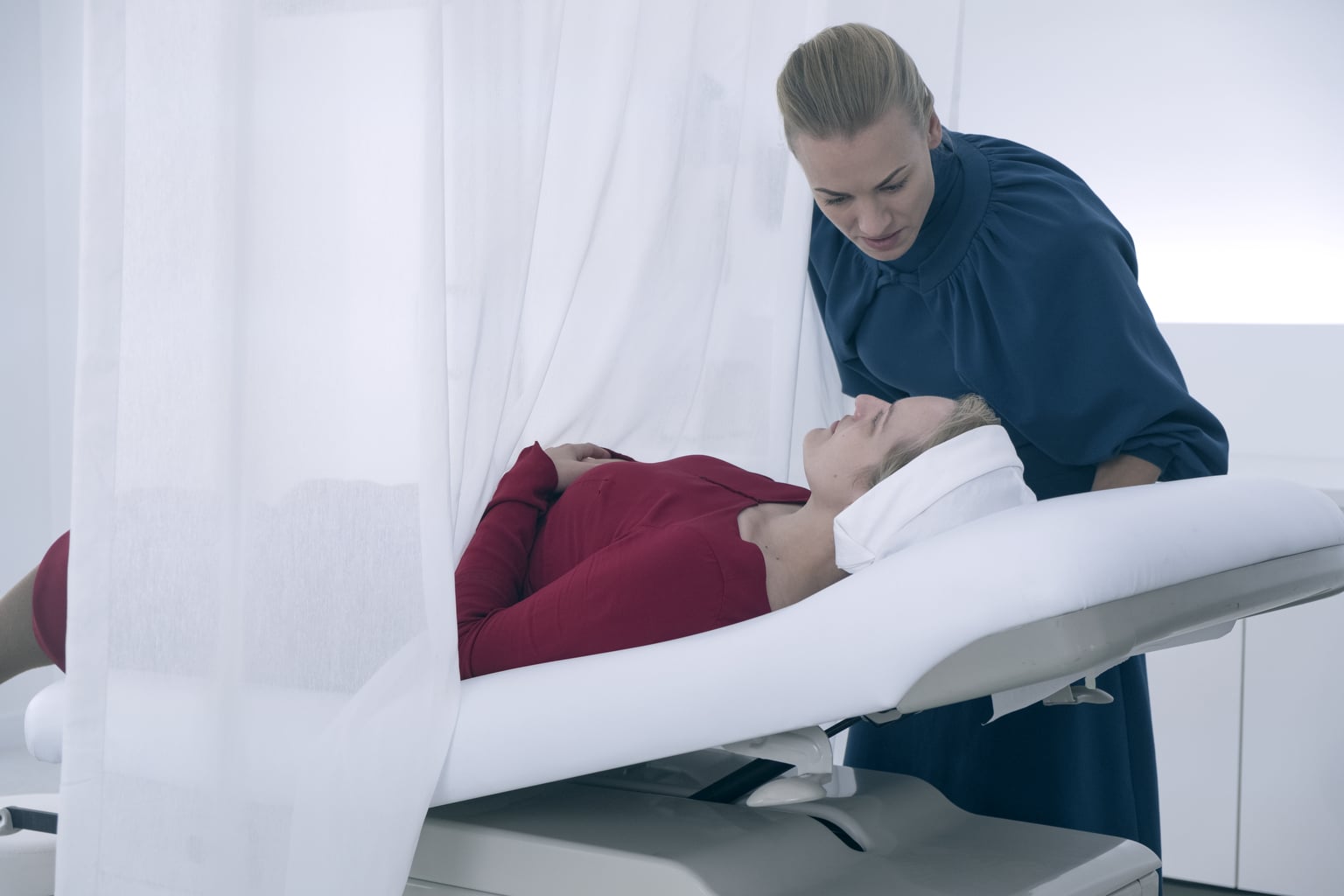 Although she’s clearly relieved to have her pregnant handmaid back in the house, Serena threatens June so she won’t act out anymore and also takes her on a trip to the doctor. When the Waterfords leave the exam room along with the physician, a male nurse turns to June and calls her by her real name as opposed to her handmaid name, Offred, immediately tipping her off that something’s up. It doesn’t take long for her to find a key hidden in her boot, which leads her down a passageway in the bottom of the building and into the back of an idling meat truck. She’s free! Well, sort of.

The truck drives June to a safe house in “Back Bay,” and Nick comes to greet her. He instructs her to change her clothes and chop off her hair, but that’s not the only thing she takes a pair of scissors to; June also hacks a chunk out of her ear in order to get rid of the tracking device all handmaids are outfitted with at the Red Center. June burns her red robes and white hat in an incinerator — as if she’s literally rising from the ashes — and once again declares, “My name is June,” in one of her trademark monologues.

The Nets Don’t Need More Stars. A Little Help Will Do.