A quick glance at the seller’s business card should have set off alarm bells for clients about to pay thousands of dollars for the artwork she was offering. Not only is her own name spelled incorrectly: "Laura Loiuse Johnson" but she is the director of an art gallery that does not exist.

There is no John Street Galleries in Sydney’s Woollahra, as her business card suggests, and no such business name is recorded with the Australian Securities and Investments Commission. 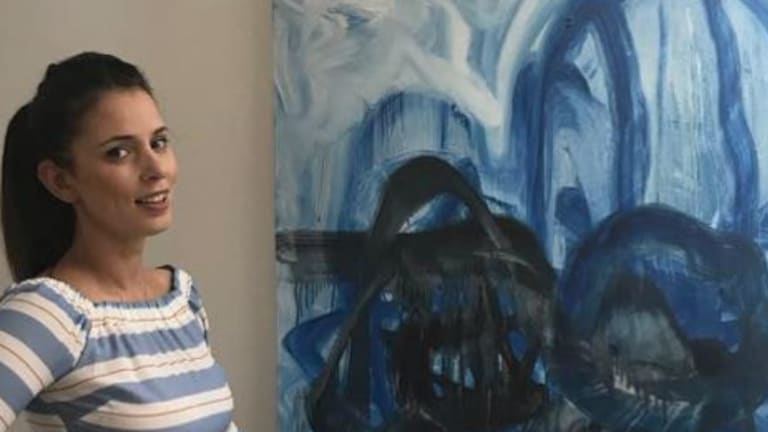 Laura Louise Johnson with a work for sale described as by emerging artist James Freeman.

"Urgent sale!" "Reduced to clear" and "F— Me Drunk … This is the BALLS $5500" are just some of Ms Johnson’s Facebook pitches for a dizzying array of works by Adam Cullen, Minnie Pwerle, Jun Chen, David Bromley and many others.

On August 14, well-respected art dealer Martin Browne felt sick when he began to read an email sent to him by Melbourne barrister Barnaby Johnston.

Mr Johnston was suggesting that Mr Browne was involved in the sale of a dubious Cullen work which had been had recently purchased by his brother, Toby, a creative director at Shift in Hong Kong. 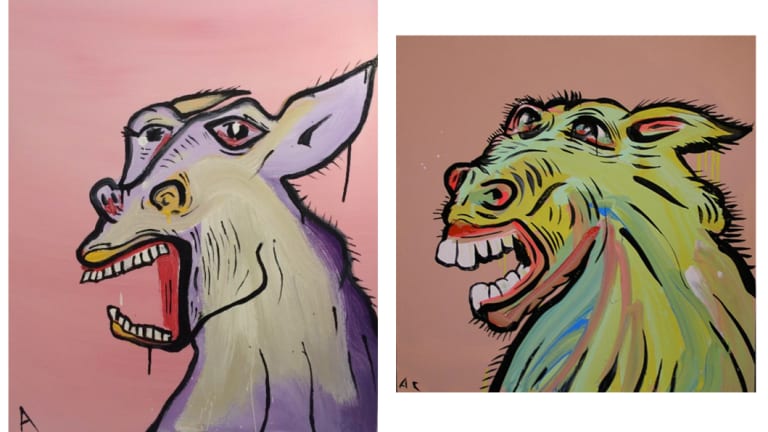 Titled Wild Brumby, the painting was claimed to be from a 2010 series by Adam Cullen, who won the Archibald Prize with his portrait of actor David Wenham in 2000.

Mr Johnston pointed out his brother’s Cullen was not remotely similar to Mr Browne’s 2010 certificate of authenticity. For starters the certificate stated the painting – Wild Brumby (in Pink) – was signed "A & C" whereas his brother’s only had an "A".

Further, the dimensions of the work were wrong. The certificate of authenticity stated that the work was 90cm by 90cm. Toby Johnston’s Cullen was rectangular. 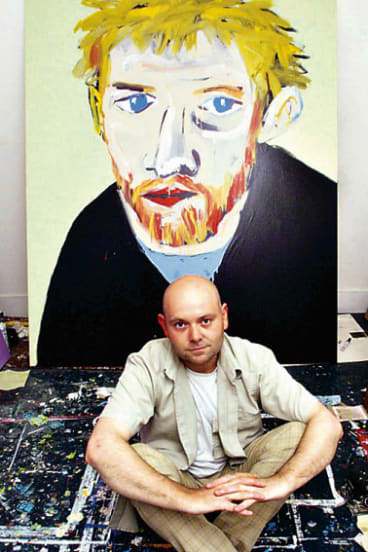 Adam Cullen in 2000 with the Archibald-winning portrait of actor David Wenham. Credit:Barry Chapman

Cullen’s long-term dealer Michael Reid, who represented Cullen while he was alive and dealt with his estate for several years after the artist’s death in 2012, was highly sceptical as to whether this Cullen work was genuine. “I would not in any way have the confidence to offer that work to any of my clients under any circumstances whatsoever,” he told Fairfax Media.

After reading the attachments on Barnaby Johnston’s email, Mr Browne’s nausea turned to outrage. His so-called certificate of authenticity dated 2010 was bogus. His signature was forged, his title was wrong and he had never set eyes on this Cullen work let alone purchased it from "a private collection" in April 2010.

"The document is a complete forgery," the dealer said.

But there was more to come. The barrister emailed a 2018 certificate of authenticity certifying "this work is an original painting, produced by the artist named" as well as a "condition report" that valued the painting between $8000 and $9500.

Both documents contained a number of anomalies and were signed by "Annabella Caimbridge, Art Valuer, Curator – part of the Martin Browne art team". No such person has ever worked at the Martin Browne gallery. A search by Fairfax Media located no one of that name.

Mr Browne told the brothers he was "seriously concerned" about the fraudulent certificates and asked them to call as soon as possible. 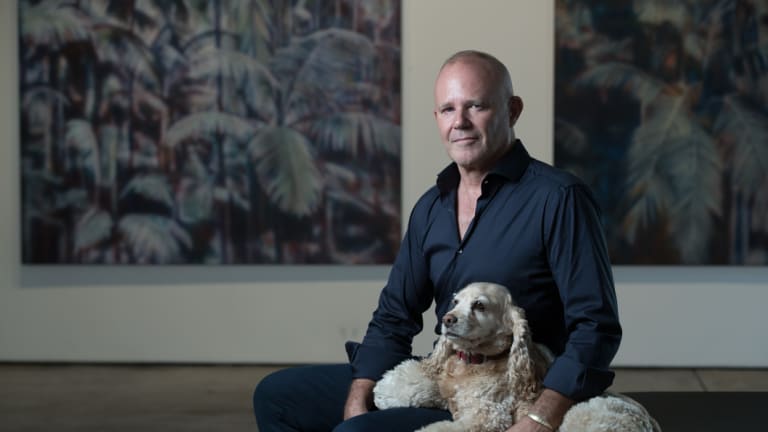 Close to midnight that same day, Toby Johnston emailed Mr Browne, copying in Laura Johnson. He told Mr Browne he bought the artwork from Laura Johnson and that she had told Toby she had “been in touch” with Mr Browne to sort out the matter.

As Mr Browne later told the police, he had never heard of Ms Johnson and she certainly hadn’t spoken to him.

Toby Johnston emailed Mr Browne the following day to say Laura had agreed to refund the purchase price [understood to be $6500] and that "she says she has reached out to the ‘seller’ to explain the false documents".

These were not the only dubious certificates of authenticity which Laura Johnson provided. A Fairfax Media investigation found she has provided certificates guaranteeing authenticity for a number of artworks by Emily Pwerle, an Indigenous artist in her late 80s and the younger sister of the late Minnie Pwerle.

However, the Mitjili Aboriginal Art Gallery, which certified the Pwerle works, does not turn up on any Google searches nor is there a business of that name registered with ASIC.

According to her LinkedIn profile Ms Johnson provides an online outlet for "Indigenous Australian and Modern Art". Her business operates in the "secondary market" which deals with "deceased estates, auction markets, interior designers and international movers and relocation specialists," says her LinkedIn profile.

Ms Johnson’s profile indicates she had previously been involved in Bamboo Wines, which re-sold wine she purchased from "failing companies post GFC". 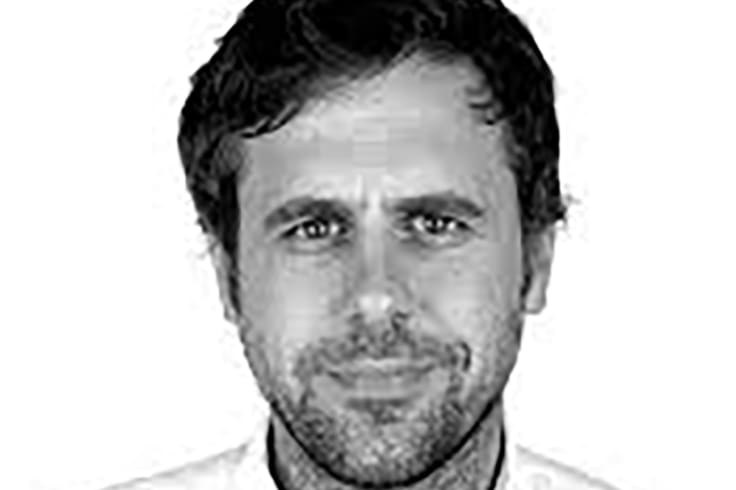 There was also Bamboo Recruits, Bamboo Events and Bamboo Sprouts, "an all-encompassing" startup focusing on tax and self-managed super funds.

However, corporate documents show her business Bamboo Enterprises was deregistered in March.

When asked by Fairfax Media about the certificates of authenticity she supplied for the Cullen work, Ms Johnson replied, “I spoke to um, [pause] … It’s actually been resolved and the client has actually told me not to speak about this – not to go any further with this.”

“The Cullen has been proven to be authentic,” Ms Johnson said in a later text message as she had it “authenticated by a global valuer”. 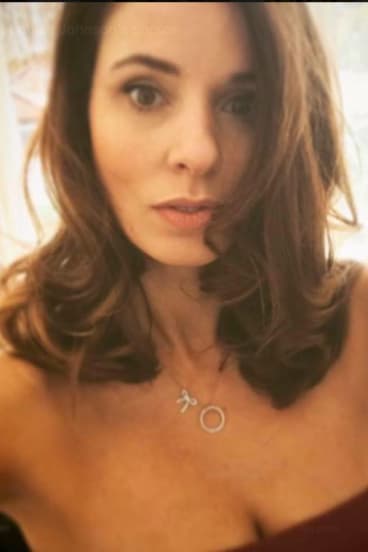 In fact the painting was not deemed authentic. Justin Turner, from Menzies Fine Art auctioneers and valuers, said the Cullen in question was sent to their Melbourne premises. Mr Turner, in Sydney, valued the work at $8800 after viewing hi-res images sent to him.

He was adamant he did not guarantee the work was authentic. This is confirmed by Mr Turner’s written valuation, dated August 28, which states: "Please note that this is an insurance valuation for an Adam Cullen artwork, not a guarantee of authenticity."

For his part, Toby Johnston was satisfied with this turn of events. “The matter has been resolved and the painting deemed authentic,” he wrote in an email to Fairfax Media.

He declined to comment further. His brother Barnaby, a member of the Victorian Bar, did not reply to phone calls or emails.

In a text message Ms Johnson wrote: "I don’t trade fraudulent work or create certificates!" She said the Indigenous artworks she sells are authentic but the certification provided by regional galleries was "very average" because "their computer skills aren’t super".

Nevertheless, refunds had been offered on the works certified by the Mitjili gallery, she said.

Ms Johnson refused to name the seller of the Cullen painting, but she insisted she had gone straight to the police as soon as she became aware the certificates of authenticity were forgeries. “I spoke extensively with [a] sargent (sic) on the phone,” she said by text and provided a ten-digit reference number as proof.

NSW Police told Fairfax Media they were unable to locate any report or incident with that type of reference number.

“Laura Johnson may think that because the issue has been resolved between her and her client that is the end of the matter. But it’s not. Either she produced fraudulent certificates in the name of my gallery on more than one occasion or somebody supplied them to her,” Mr Browne said.

“The whole basis of prices in the art world is based on trust in the history and documentation of provenance of the artwork concerned. The provision of fraudulent certificates undercuts the whole basis on which art is sold, priced, valued and collected.”

Ms Johnson likened the situation to purchasing "a gluten free sandwich" for a customer. "You pay me for my trouble and it turns out it’s not [gluten free] … after you’ve had a bite, you want your money back and I have to go back to the shop and get mine back. Meanwhile they’ve closed."