Irresistibly silly kids' comedy duo The Listies are rightly popular with adults and children alike. The title of their latest show is an enormous acronym – it stands for "Rolling On the Floor Laughing So Hard A Little Bit Of Wee Comes Out" – which is such a genuinely serious risk for audiences it was probably worth a trigger warning. Goodness knows what the Malthouse will smell like when the season is over. 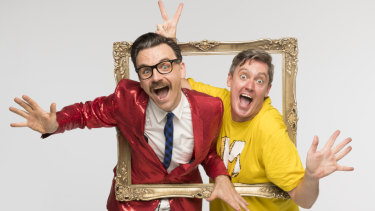 The Listies deliver plenty of laughs for audiences of all ages.

Richard Higgins and Matt Kelly pour the straight man and clown dynamic into a unique mould that sits somewhere between The Odd Couple and Bert and Ernie from Sesame Street, though it also plays ingeniously on a template familiar to everyone in the room: the interplay between exasperated parent and mischievous child.

Here, a chaotic whirlwind of physical buffoonery, wild puns, sight gags and twisted lullabies springs up through a tussle over bedtime. Rich wants to retire in an orderly fashion; Matt isn't sleepy yet, and resorts to hilarious acts of sabotage to stay up late.

The result is an hour of rambunctious fun so clever, and so perfectly attuned to its audience, it wouldn't surprise me if The Listies became the first children's comedy act to win top gong at the Comedy Festival.