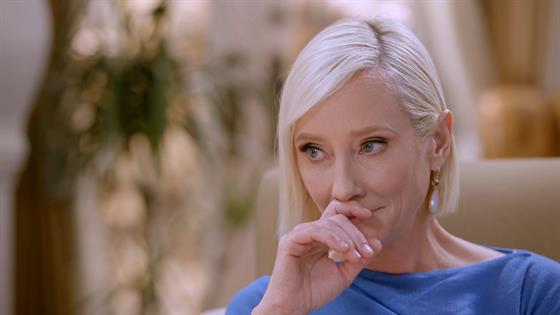 In this clip from Thursday’s all-new Hollywood Medium With Tyler Henry, Anne Heche finds herself overwhelmed with emotions after Tyler Henry connects with her late brother Nathan. Not only does Tyler touch upon Anne’s brother’s past struggles, but the spirit (through Tyler) acknowledges that his death helped the Chicago P.D. actress get out of a dire situation.

“His death is the reason I moved from New Jersey to Chicago,” Anne confirms during the reading. “I do believe that it was the universe…that something extraordinary needed to happen to get me out of what would certainly be my death—if I continued to live with my mother in that space.”

While the spirit feels he did not have a “fair shot at life,” Tyler states that Nathan only has love for Anne.

“The amount of love that comes through for you is intense,” the famed clairvoyant assures the My Friend Dahmer actress.

Understandably, this remark moves Anne to tears, who hopes her “make-up artist used waterproof mascara.” In fact, an emotional Anne decides to take a brief break to pull herself together.

During touch ups, Anne comments on how “specific” Tyler’s words are. “Not everybody has a team of people that swarm in after I’ve connected to my brother,” Heche jokes. “I’ve only waited for 49 years, no big deal!”

Watch the season finale of Hollywood Medium With Tyler Henry Thursday at 8 p.m., only on E!