Zola is a film with a single but singular claim to fame. The story was originally told in tweets – 148 of them.

It was then picked up by journalist David Kushner, who wrote a follow-up for Rolling Stone, giving an account of the background to it all. 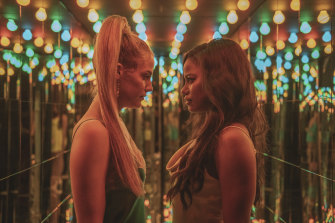 The film is based on this article but social media and mobile phones still dictate the shape of its script. It’s jagged, jumpy and full of street slang. By the time it’s over you may feel like retiring to a quiet corner to read a book – the old-fashioned kind with paper, paragraphs and punctuation.

It begins in Detroit, where Zola (Taylour Paige), the story’s narrator, is working as a waitress. One day, she gets into conversation with Stefani (Riley Keough), a customer of her own age who’s come in with a friend, introduced only as X (Colman Domingo). He’s both burly and belligerent but after the two girls learn that they both work as exotic dancers, Zola accepts Stefani’s invitation to spend a few days in Tampa, Florida, and dance in one of the city’s clubs. It’s a decision she’ll soon regret.

She finds she’s travelling with Stefani, X and Stefani’s gormless boyfriend, Derrek, played by Nicholas Braun, who will be familiar to fans of the TV series, Succession, as the equally gormless executive gofer, Greg. And it’s not long before she discovers that exotic dancing is, in this case, a euphemism for prostitution.

The film’s director and co-writer, Janicza Bravo has proved her gift for absurdist comedy in her earlier films and this one was a success at the Sundance Festival but the black humour buried in the bullying, the bumbling and the random violence Zola endures during her enforced stay with X and friends is pretty elusive.

One of the main jokes lies in the discrepancy between the muscle and brain on show. Stefani and Derrek are airheads. They don’t pretend otherwise but X, who’s supposed to be the intelligence behind the outfit, is charging ludicrously low prices for the girls’ services. And Zola, who’s determined not to be one of them, avoids having to sell herself by taking over the online advertising, raising the rates and re-casting herself as Stefani’s chaperone.

Kushner’s background research turned up differing versions of the trip. The real-life model for Stefani has denied prostituting herself, claiming Zola ruined her life with her tweets, and Zola herself has admitted she enhanced the facts just a little in an effort to point up the farcical nature of events. All in all, the tale of what happened in the aftermath of her extended saga sounds a lot more fun than the adventure itself.