Aldi launches £99 pizza oven that looks identical to one that’s £1,000

Aldi launches a £99 pizza oven for summer – and it looks almost IDENTICAL to one that costs five times more… but can you tell the £500 gadget from the discount version?

Aldi has launched a cut-price £99 pizza oven in time for summer, but it’s proven so popular with customers it’s already sold out online.

However keen cooks can still get their hands on the discount gadget in Aldi stores from May 24, if they’re quick.

The £99.99 three-in-one pizza oven, which also works as a barbecue, is lower in price than many rivals, including an almost identical-looking device by Lifestyle that is nearly five times more expensive at £479.

So can you tell which is which just by looking at the pictures? 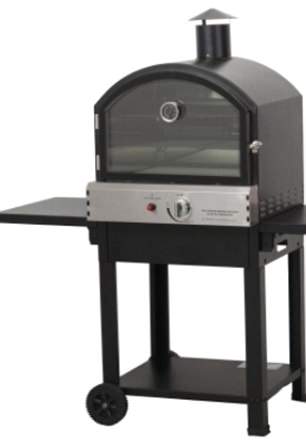 Aldi launched the same appliance last year and it proved just as popular.

The supermarket stated that it has brought it back for 2018 thanks to soaring demand as part of its Specialbuys range, and it will only be available while stocks last.

The device comes with a traditional barbecue, as well as a smoker and a pizza oven. It looks very similar to Lifestyle’s Taranto Gas Pizza BBQ Oven, which is currently reduced from £633 to £479.

The two gadgets share many of the same features, including a temperature gauge, a pizza stone, chimney, smoker and ash collector.

They also both have a trolley stand with wheels, and two foldable side shelves.

Aldi says of its summer gadget: ‘Perfect for keeping in the garden, this is a great way to cook food other than burgers and sausages at your next party.’