Alison Watkins and Carolyn Hewson to join RBA board

The Reserve Bank board has edged closer to gender parity after the federal government appointed former Business Council of Australia director and Coca-Cola boss Alison Watkins and CSL director Carolyn Hewson as members. 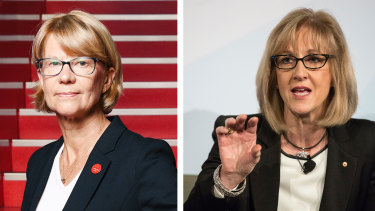 Ms Watkins is a former member of the Takeovers Panel and is a non-executive director of The Centre for Independent Studies. The think-tank’s recently appointed chief economist Peter Tulip left the RBA where he was a researcher after lashing the central bank’s board for not understanding monetary policy or statistical research and being hostile to opposing views in one of the most turbulent years in recent economic history. The RBA’s board was also criticised by former prime minister Paul Keating this year, for being “late to the party” in a crisis and too scared to break central banking orthodoxy. Ms Watkins replaces Mr Moss, whose term at the RBA ended on December 1.

Ms Hewson, a director of Infrastructure SA, was formerly a director at BHP, Westpac and BT Investment Management and studied economics at the University of Adelaide. She is the ex-wife of former Liberal Party leader John Hewson.

She will replace EnergyAustralia boss Ms Tanna, one of the country’s most prominent businesswomen, whose term at the RBA ends on 29 March 2021. Ms Tanna was criticised by Centre Alliance Senator Rex Patrick in February who used parliamentary privilege to attack her over the her company’s tax record and called for her to resign from the RBA.

“The appointments of Ms Watkins and Ms Hewson will help ensure that monetary policy continues to support Australia’s economic resilience and prosperity through the recovery phase of the COVID-19 pandemic and beyond,” Mr Frydenberg said in a statement.

The Reserve Bank board is required to ensure the monetary and banking policies are “directed to the greatest advantage of the people of Australia”. In particular the bank is required to help with currency stability, maintain full-employment and ensure economic prosperity and welfare.

The board could go through more changes in 2021, with Mr Debelle’s term ending in September and Mr Harper’s expiring in July.