This copy of the sold-out viral pink Zara dress is HALF the price – but can YOU tell them apart?

A viral pink Zara slip costing £45.99 sold out after being hailed the dress of the summer, but if you’re still hankering after it, there’s a very convincing copy on offer.

While the backless slip dress, which was hailed by influencers as ‘able to suit everyone’ and amassed over 7.2 million views on Tik Tok, is in stock in dark colours for the winter, the pink version is only available on eBay – at an inflated price of £69.

Now a little-known fashion brand Loalirando is cashing in on the viral trend, selling a dupe version on Amazon in the same baby pink hue for £21.96, with strikingly similar back detailing to the original. 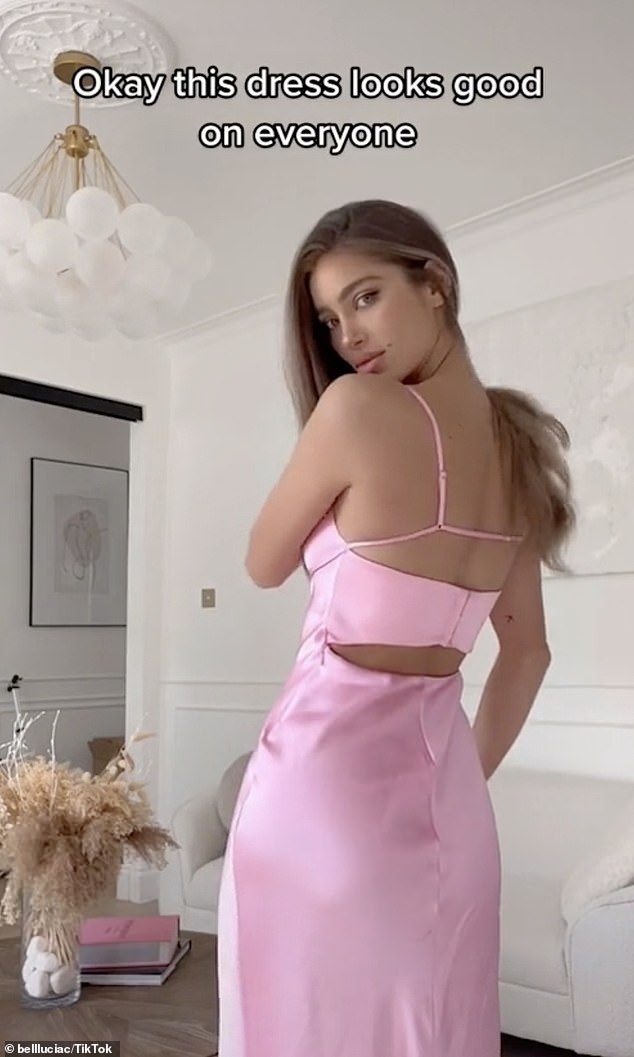 The £45.99 ZARA dress quickly sold out after being heralded as the perfect summer wedding guest occasion dress on TikTok 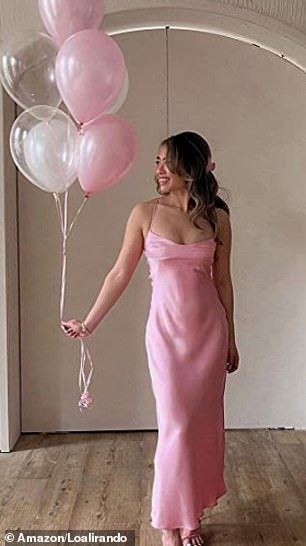 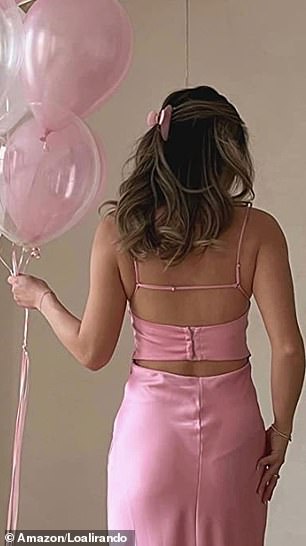 Amazon are cashing in on the viral trend, selling a dupe version in the same baby pink hue for £21.96, with strikingly similar back detailing to the original(pictured above)

It features a bustline that has been sectioned with piping and a low scoop neck, with spaghetti straps and a cut-out hook and eye detail on the back.

The ZARA dress came in springtime shades lilac and green – with both versions selling out shortly after their debut.

The high street retailer has now revamped the sellout sensation for the darker months with new shades released for the autumn winter collection in black and taupe. 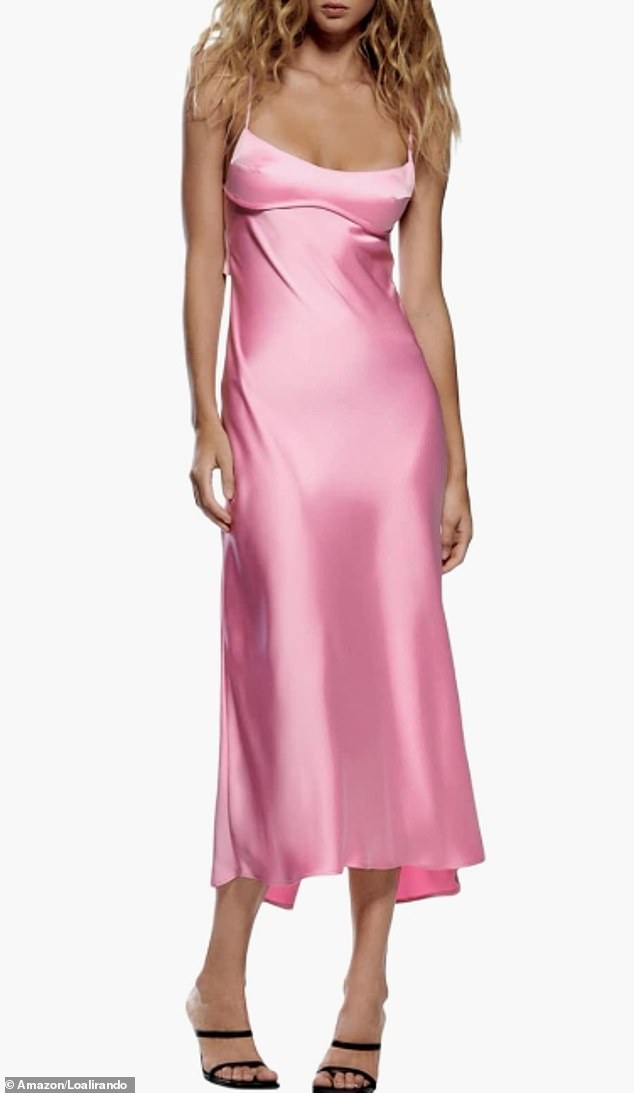 Made of polyester, the satin-esque spaghetti strap dress has been met with mixed reviews, with some saying it ‘comes up small’ and another review calling it ‘see-through’

However, fans of the cocktail dress are still thinking pink, with #zarapinkdress going strong on TikTok.

Another TikTok creator said: ‘I saw it, and I have a wedding coming up in March, and I thought it would be perfect… It’s so good… It’s giving How to Lose a Guy in 10 Days, but pink.’

Seeing double? The dupe version (left) from Amazon comes in similar colours as ZARA’s winter/autumn version of the viral dress(right)- which they have released in black and taupe

For those hankering after the pink version, one Amazon shopper described it as: ‘A good dupe for the viral Zara dress.’

Made of polyester, the satin-esque spaghetti strap dress has been met with mixed reviews, with some saying it ‘comes up small’ and another reviewer calling it ‘see-through’, but others say the midi dress doppelganger ‘looks great’.

The frock is sold by brand Loalirando and comes in five different colors including black, mimicking the dresses still sold as part of Zara’s winter collection for £45.99.

The ZARA version, which is made of satin, does seem more ‘matte’ than the shinier, cheaper dupe and doesn’t feature a slit at the back hem.

The bulk of Loalirando’s stock appears to be on Amazon but also has a range sold in ASDA’s US counterpart Walmart.

However, not all are fans of the satin gown, with one TikTok creator with a 36D bust warning it could lead to a wardrobe malfunction.

‘Now don’t get me wrong, I was feeling myself in that dress but my only con is the low neckline, if you have any type of breasts, it’s not for you.

‘Normally I wear a size medium or large but with this dress I wore a size extra large and it was only because of the breast area, I thought If I went up a size the chest would be larger as well but that wasn’t really the case. 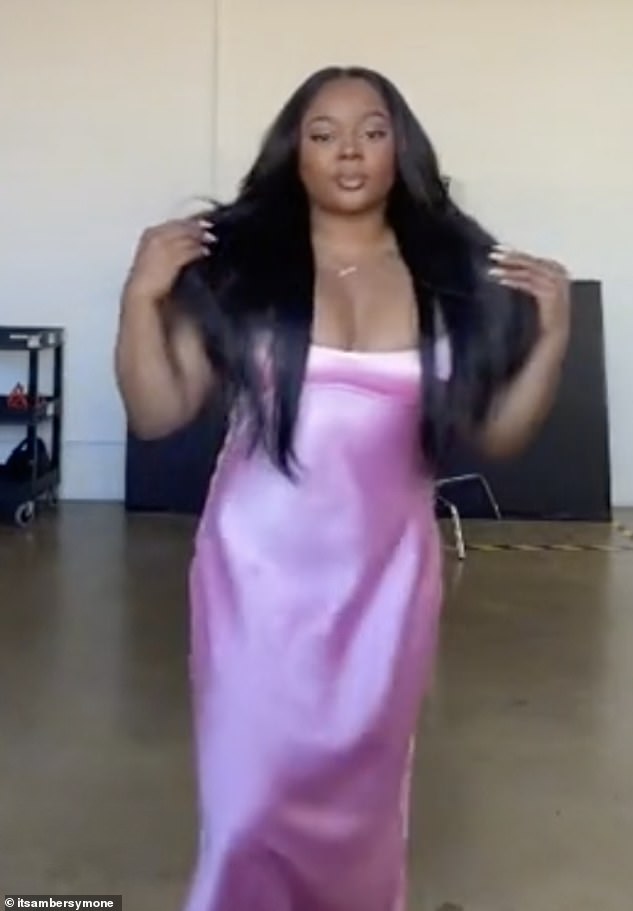 One creator, who had a larger chest, warned big breasted women that they might encounter a wardrobe malfunction

‘Overall, the dress is absolutely stunning, but if you have a larger chest, I highly recommend trying it on before you purchase,’ said another.

One person said: ‘My DD could never so pretty though’.

Another agreed, saying: ‘My DDD just laughed, but you look AMAZING in it!’

While one person thought the popularity could be a negative: ‘Be careful, I think everyone is going to wear that dress to a wedding.’

The pink number isn’t the first ZARA dress to go viral, with fashion fans ‘following’ a polka dot dress by the retailer in 2019.

An Instagram account emerged with posted ‘sightings’ of a black and white polka dot dress out in public.

From spotting the same frock several times at one event, to seeing double in the same space, the polka dot maxi was seen all over the UK.

If you enjoyed this story…

This viral hand luggage bag will fit under your seat AND save you paying airline baggage fees is only £17.99 on Amazon.

From bold jewelry to sparkly tops here’s how to wow from the waist up this festive season.

And a woman has divided opinion with a ‘revealing’ Christmas party outfit from Zara… but do YOU think it’s ‘suitable attire’?