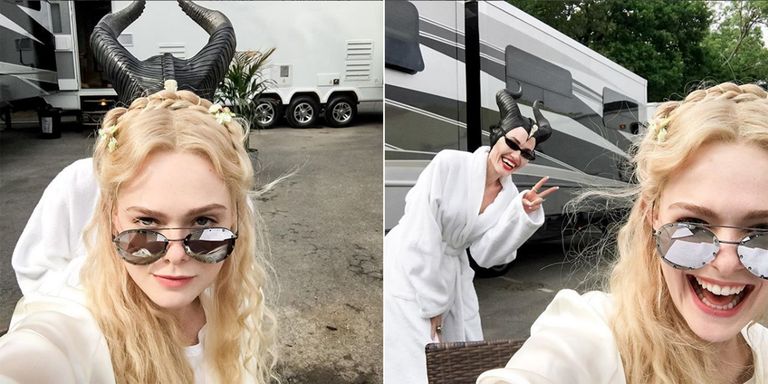 Production for Maleficent II has officially begun, and costars Angelina Jolie and Elle Fanning are already giving us a behind-the-scenes look at the upcoming sequel to the revisionist spinoff about Sleeping Beauty‘s iconic villain.

Fanning, who stars as Princess Aurora, shared two photos from the London set on Instagram today, showing her silly side with Angelina Jolie, who plays the titular enchantress. First she posted a selfie with the Oscar-winner hiding behind her with Maleficent’s signature horns popping out from behind Fanning’s head.

The next photo (also a selfie) was another photobomb from Jolie, who smiles and holds up a peace sign. “It’s bring your mom to work day on the #Maleficent2 set!!!!! ✌?,” Fanning wrote, alluding to how Aurora considered the Maleficent as her fairy godmother in the 2014 film.

The sequel will follow the unlikely duo as they “form new alliances and face new adversaries in their struggle to protect the moors and the magical creatures that reside within,” Entertainment Weekly reports.

Walt Disney Studios also officially announced on Twitter today that filming for Maleficent II had begun—and that Michelle Pfeiffer has joined the cast as Queen Ingrith. Other new faces include Chiwetel Ejiofor, Ed Skrein, Robert Lindsay, and Harris Dickinson as Prince Philip, according to Entertainment Weekly. Sam Riley, Imelda Staunton, Juno Temple, and Lesley Manville are reprising their roles from the 2014 original.

Joachim Rønning (Pirates of the Caribbean: Dead Men Tell No Tales) is directing, while Linda Woolverton, Micah Fitzerman-Blue, and Noah Harpster are behind the script. The film doesn’t have a release date yet.