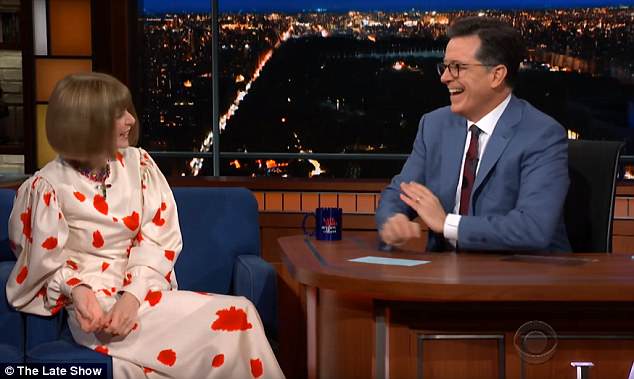 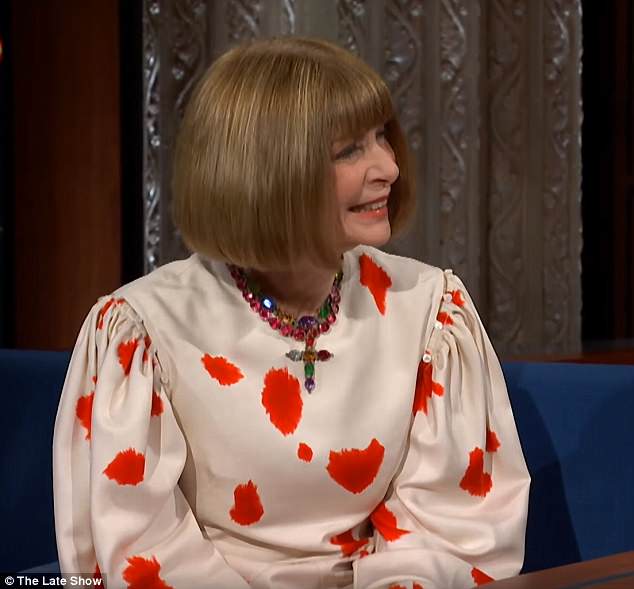 Denied: When stopped by press outside and asked about rumors that this was her last time chairing the ball, she said: ‘I hope not’ 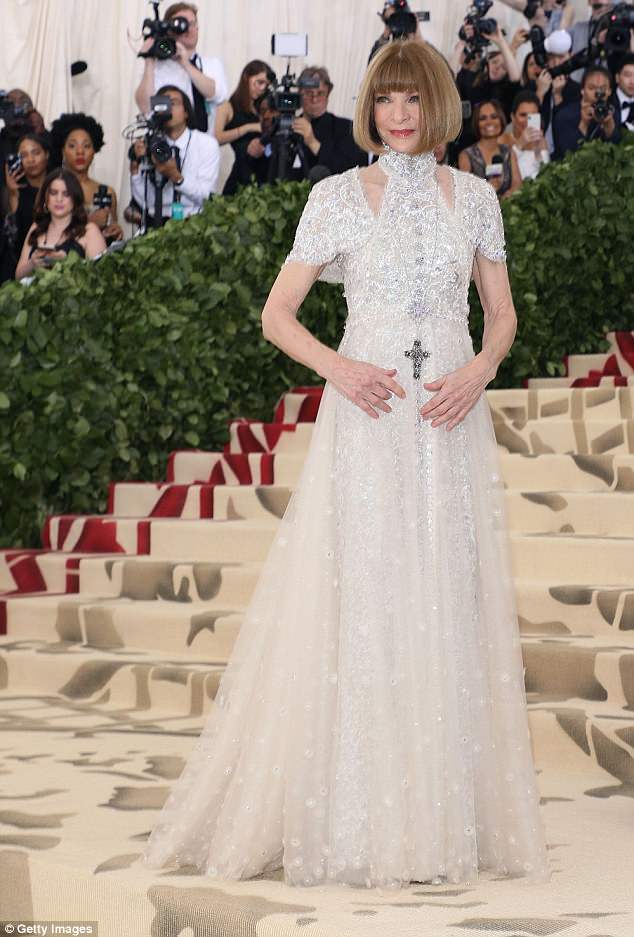 What really went down: The 68-year-old, pictured at the 2018 event on Monday, dished on some of the inside details 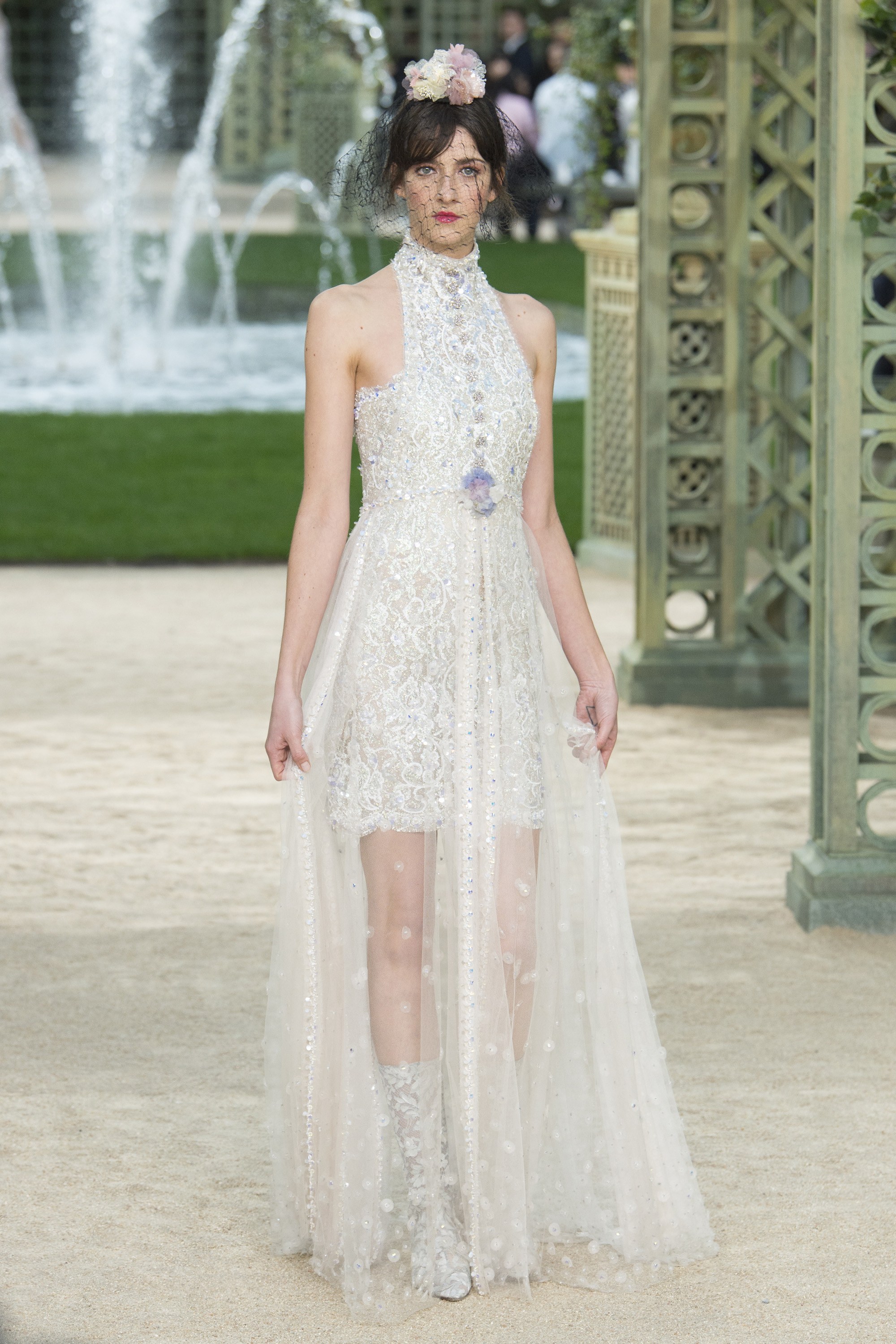 Get the look below!

At long last fashion's biggest night of the year is finally upon us and its ringleader stunned as she stepped foot on the ivory-colored carpet wearing a gorgeous lace gown picked hot off Chanel's Spring 2018 Couture runway.

Going in theme, Anna's dress was indeed 'heavenly' with its ornately embellished bodice that fell to the floor in an elegant gossamer sweep.

She topped things off with a heavy cross that swung from her neck and kept her hair done in that iconic bob. 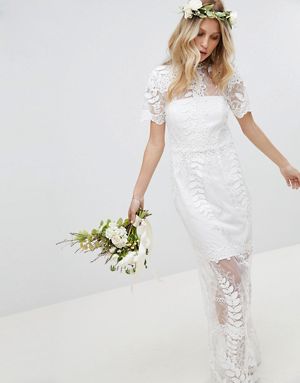 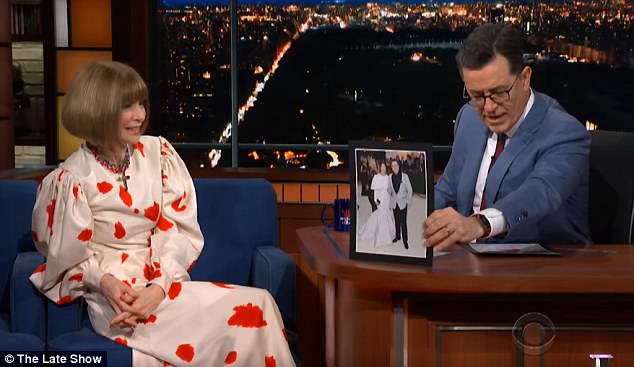 Good time: She commented on some of her best dressed and laughed with Colbert 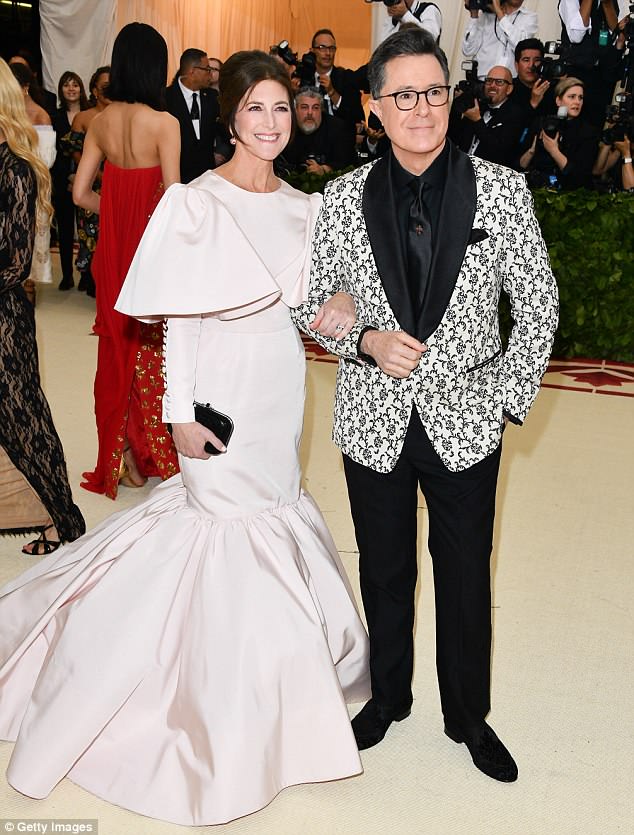 Star-studded: Colbert attended with his wife and was sitting a celebrity-packed table with Hugh Jackman, Sienna Miller, and others

When Colbert asked about why he was sitting with the stars near him, Wintour told him: ‘Obviously you are a star attraction, and I thought you were very well dressed.’

Colbert also revealed that everyone at the table decided to wait to eat until Wintour sat down — but they were quickly interrupted for a surprise performance by Madonna in the great hall.

‘Pope Rihanna had told you that at the sound of the bells you had to move,’ Wintour said.

‘Rihanna … took the theme extremely seriously and nailed it,’ she added, discussing the best dressed of the night.

She also liked Black Panther star Chadwick Boseman, but her ‘very favorite’ was Father James Martin, a Jesuit priest who was advising on the exhibition and wore his real robes.

‘And apparently all night people were coming up to him and saying, “I really like that you came as a sexy priest. And you look so authentic!” Wintour revealed, to much laughter from the audience. 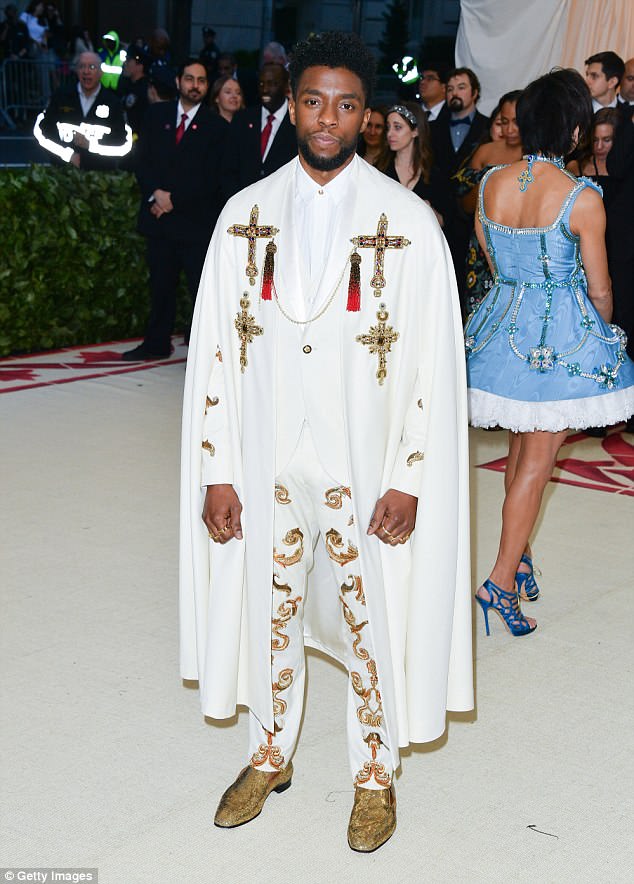 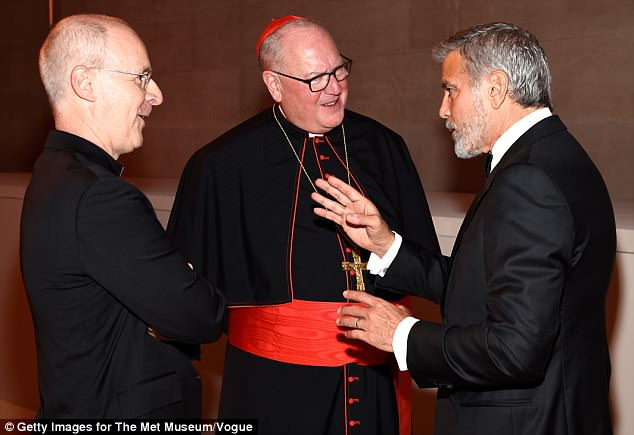 Real deal: She said her ‘very favorite’ was Father James Martin, a Jesuit priest who was advising on the exhibition and wore his real robes (left, with George Clooney and Cardinal Dolan)

On that point, Colbert asked Wintour if she’d heard of any push-back against the theme of the exhibit, to which Wintour insisted she did not.

‘We worked very closely with the Vatican through the whole process and Cardinal Dolan, as I believe you know, was one of our guests of honor,’ she said.

The Vogue boss was also a fan of Amal Clooney’s Richard Quinn dress, but revealed that she actually changed outfits inside the event.

‘It was made of tin foil, so she was little bit concerned it might rip during the evening,’ she said. ‘So she went into the gift shop and she changed into this extraordinary Tom Ford dress, which is designed to look like stained glass.’

ScarJo explained her choice to wear a Marchesa dress to the Met Gala, saying that Chapman should not be punished for the sins of her husband — a sentiment that Wintour approves of. 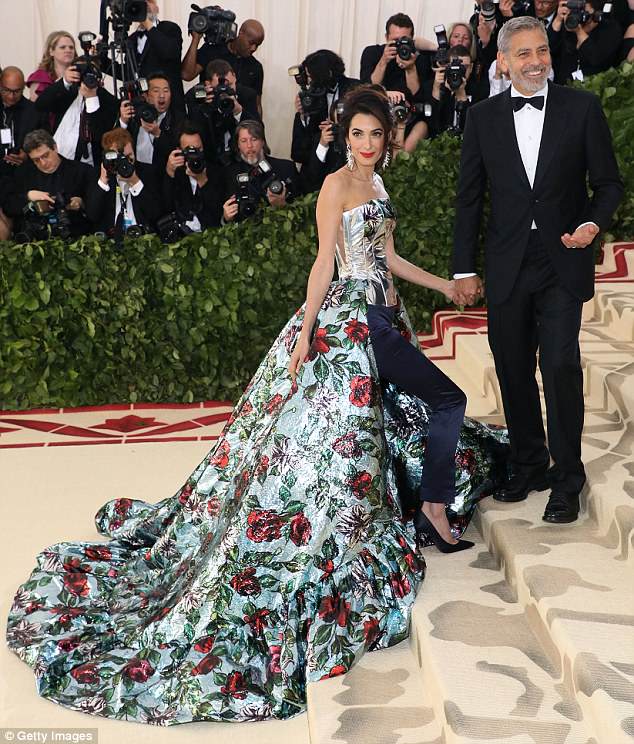 Experimental: Amal Clooney co-chaired the event this year and wore a Richard Quinn dress that was made of tin foil 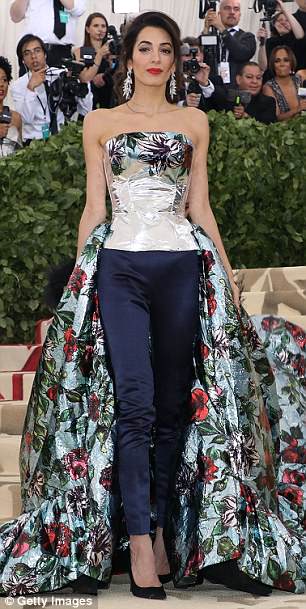 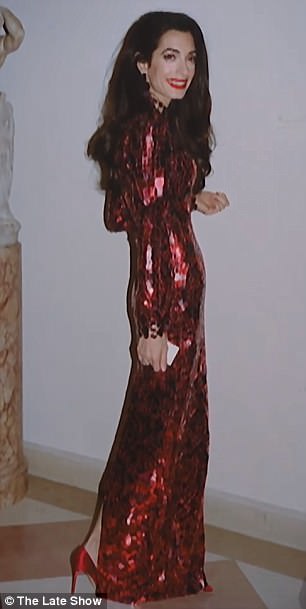 Costume change! Amal was afraid of tearing the Richard Quinn design (left) and changed later in the gift shop, putting on a Tom Ford number (right) designed to look like stained glass Crew: Amal is pictured with her husband George Clooney and friends Cindy Crawford and Rande Gerber

‘I totally agree with that,’ she said. ‘Georgina is a brilliant designer and I don’t think that she should be blamed for her husband’s behavior.

The supportive comments about Chapman appear to clear up the mystery of weather Marchesa will make a comeback in the fashion community.

In fact, Wintour seemed keen to clear up a few uncertainties on Wednesday, including she she’d be moving on from the Met Gala.

Showbiz411 had reported earlier this week that this may have been the last time that Wintour hosted the event, as she is rumored to be leaving Conde Nast this summer.

With rising budgets, lower donations, and the drama-packed spectacle of the guest list and red carpet, the site suggested that Wintour’s departure could mean and end to the Met Gala as we know it.

The event — which this year centered around the exhibit ‘Heavenly Bodies: Fashion and the Catholic Imagination’ — was held on Monday after a year of planning. Wintour co-hosted with Rihanna, Donatella Versace, and Amal Clooney. 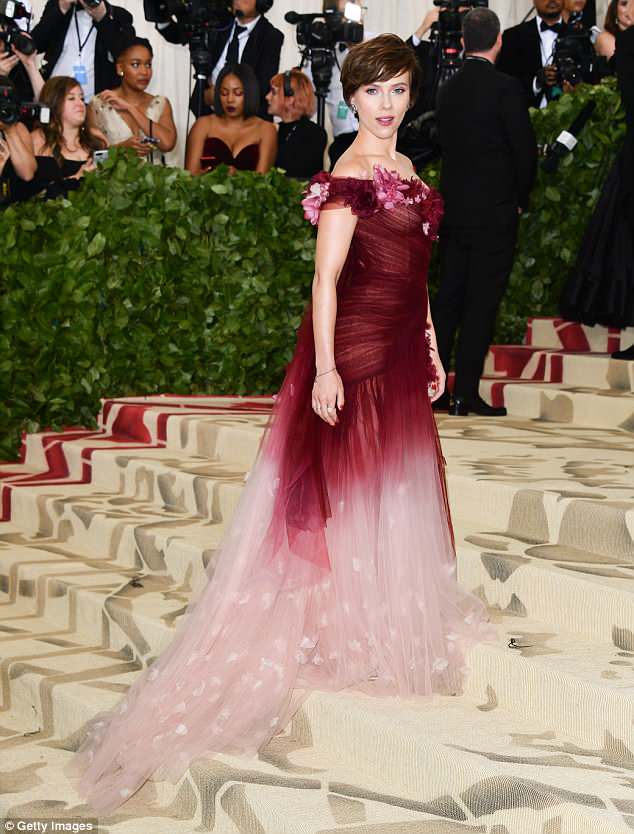 All for it: She also supported Scarlett Johansson’s decision to wear Marchesa, agreeing that Georgina Chapman should not be punished for ex-husband Harvey Weinstein’s sins

She is currently artistic director for the company, but is rumored to be stepping away after the publication of Vogue’s September issue in August.

Showbiz411 speculated that when she leaves her position, she may also step down as gala chair, a position she has held since 1995.

It certainly would be the end of an era if Wintour stopped hosting the event. In 2014, the institute it raises money for was renamed the Anna Wintour Costume Center, and the editor transformed it from a local fete only know by New York City elite to a worldwide spectacle.

And if she does leave, the gala itself may get an overhaul. Though in recent years it has turned into a parade of celebrities and flashy outfits, it actually began in 1946 as a way to raise money for the Costume Institute — and is still primarily a fundraiser.

Guests at this year’s event were expected to fork over up to $50,000 for the chance to attend, with designers shelling out up to $500,000 to buy a table for the night and fill it with a bevy of stars wearing their designs.

But despite tickets costing a small fortune, the 2017 gala didn’t raise quite as much as the year before. Gross receipts for the event were reportedly $12.2 million, compared to $13.5 million in 2016.

Numbers have not yet been revealed for 2018. 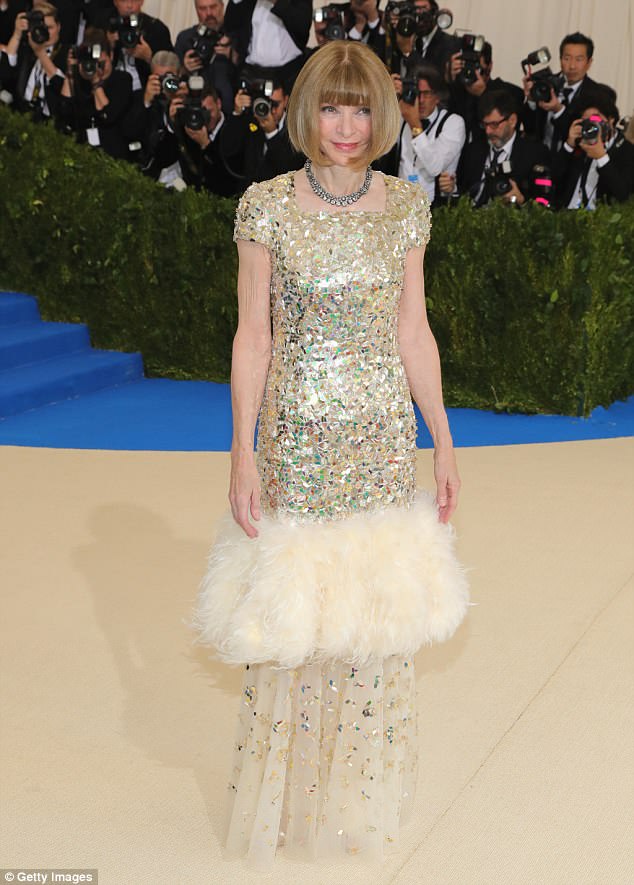 Ain’t no party like a fashion party! It was rumored that this might have been Wintour’s last time as chair (pictured in 2017) 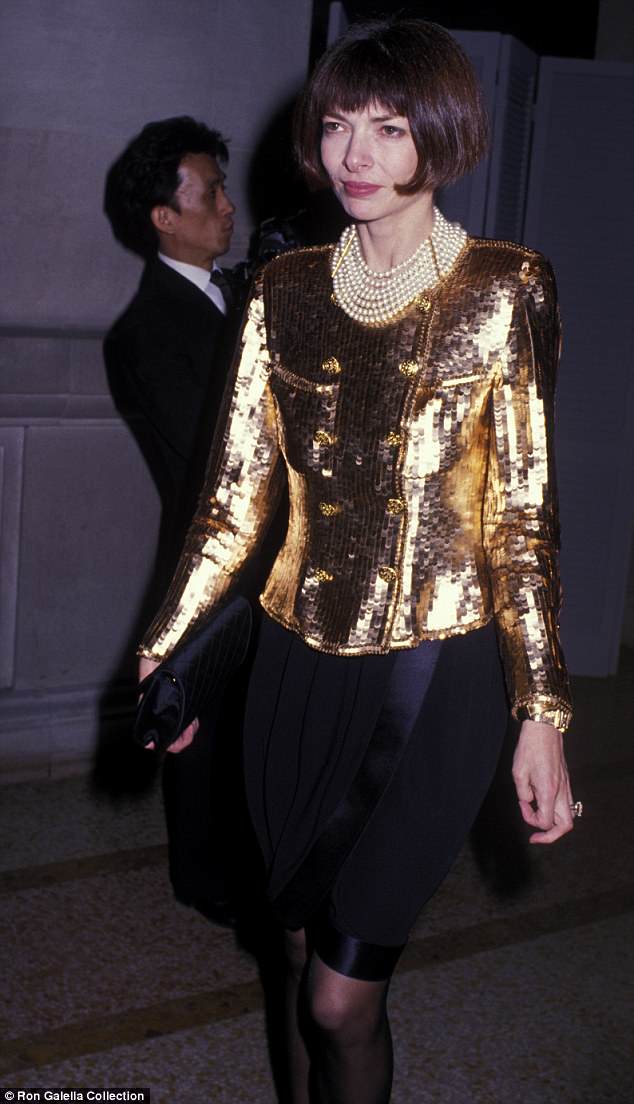 Flashback: She has been attending the gala since taking over as the boss of Vogue in the ’80s (pictured in 1989)

While it’s unlikely that the gala, which has been held annually for over 60 years, will come to an end completely — whether or not Wintour stays — it’s possible that there may be a shift in how it’s put on.

That may be a relief for some stars who’ve come to see the gala as a chore that’s both high-pressure and hyper-exclusive.

‘The overall ambience isn’t super friendly,’ a gala regular told Page Six this weekend. ‘It’s not like walking into a party where you know everyone and everyone’s happy to see you.

‘If you walk into the girls bathroom, all the celebrities are hanging out together, smoking together and ignoring everyone else,’ the regular added.

Plus, ‘it’s very dog-eat-dog. People won’t move out of the way [on the carpet] for the next person.’

‘It’s very high school,’ added another insider. ‘There are plenty of people who have enough money for Met Ball, but . . . if [Wintour] doesn’t deem you worthy, you’re not coming. Considering that it’s a fund-raiser, that’s extremely elitist.’

In fact, Wintour signs off on every single guest, including those invited by designers who buy tables. She approves every detail, including the seating charts, and has been known to ban certain celebrities. 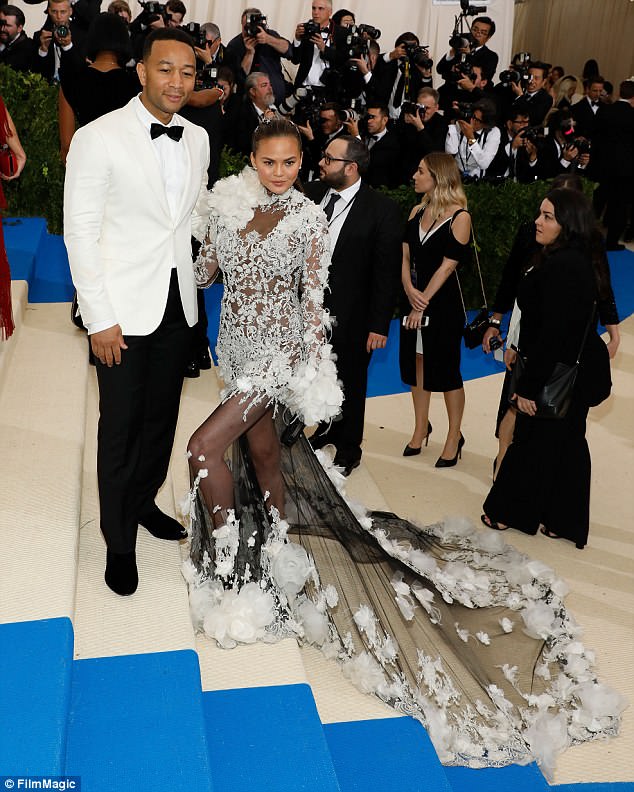 Some celebrities, though, decide not to go on their own. Demi Lovato told Billboard that the party was too ‘cliquey’ after attending in 2016, while Gwyneth Paltrow dubbed it ‘un-fun,’ ‘crowded,’ and ‘boiling.’

‘If you had a million arms and all the people you would punch in the whole world, they’re all there,’ said Tina Fey, who called it a ‘jerk parade.’ ‘Clearly, I’ll never go again.’

Last year, celebrity-watchers got a peek of what actually goes on inside the gala — and some of that clique-like behavior — when several stars posted selfies taken inside the event, and particularity inside the bathroom.

Though Wintour has banned attendees from posting on social media, many broke the rules last year.

Photos and video from the night that were posted on Instagram and Twitter showed a huge crowd of famous faces in the bathroom, including Kendall Jenner, Kylie Jenner, Kim Kardashian, Lily Aldridge, Diddy, Brie Larson, Frank Ocean and Emily Ratajkowski. 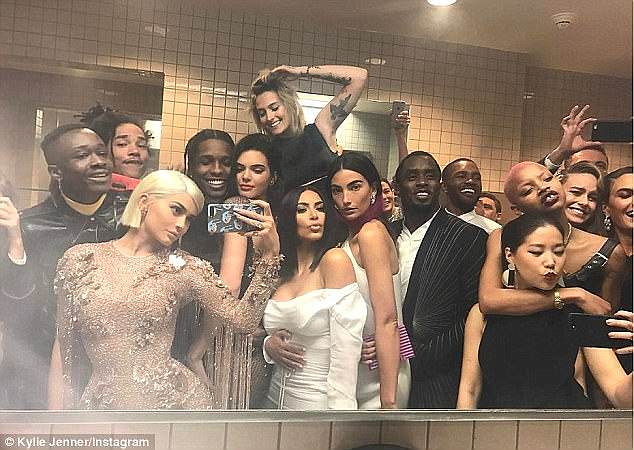 What selfie ban? Last year, dozens of stars  posted photos and video on social media from the event 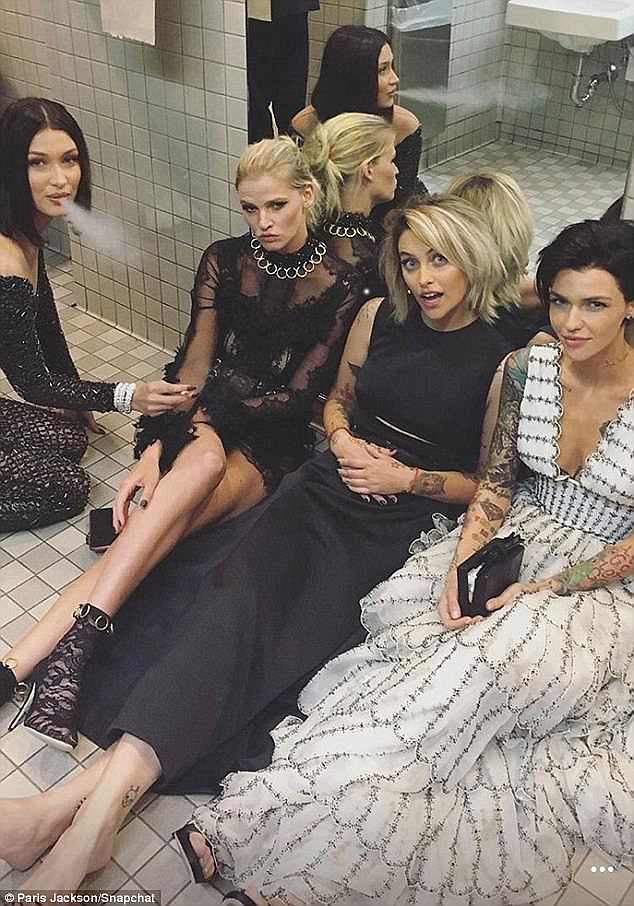 Uh-oh: Several stars, including Bella Hadid, were also seen smoking in the bathroom While most were just smiling for the cameras or hanging out, a few were captured with cigarettes in hand, brazenly defying New York’s indoor smoking ban.

The flagrant disregard for local laws caused a bit of trouble days later, with board members and donors at the Metropolitan Museum of Art criticizing the behavior.

The New York City Smoke-Free Air Act prohibits smoking in nearly all indoor workplaces, and calls for a fine of $200 to $400 for first-time violators. Second violation within the first year carry a $500 to $1,000 fine, while third or subsequent violations within a year carry a $1,000 to $2,000 fine.

‘As a donor to the Met, I was so insulted to see all these “celebrities” smoking and taking selfies of themselves in the bathroom,’ a source told Page Six. ‘Mostly, it’s disrespectful to the art collection, which needs to be kept 100% smoke-free. I would honestly like to see these people fined by the city.’

For the 2018 gala, the Met reportedly took steps to prevent a repeat, posting ‘No Smoking’ signs and having guards patrolling for rule-breakers.