On Thursday, May 2, the Shondaland characters will first collide in the Grey’s Anatomy episode "What I Did for Love." ABC’s episode synopsis teases that Maggie (Kelly McCreary) will treat someone from Station 19, perhaps paralleling her flirtation with Station 19‘s Dean Miller (Okieriete Onaodowan) earlier this season. Later that night, in Station 19‘s "Always Ready," a fire inside a coffee beanery results in a member of the squad hospitalized with a potentially life-threatening situation. At first glance, it’s unclear if this incident is separate from the circumstances of Maggie’s patient, but it would be extra dramatic if two firefighters end up on gurneys by the end of the night.

The new crossover comes months after the shows first officially mixed together in an October 2018 pairing of episodes. Back then, Miller was left waiting for an answer after asking Maggie out (her boyfriend Jackson was MIA from the hospital at the time), and in the Station 19 followup, she and DeLuca (Giacomo Gianniotti) ended up at a rescue scene with the squad. Maggie then officially turned down Miller, who assured her that his offer was still valid whenever she was single.

As Maggie’s relationship with Jackson (Jesse Williams) is still solid, there probably isn’t a possibility of her forming a deeper connection with Miller. Plus, as Entertainment Weekly reports, the Station 19 actors slated to guest star on Grey’s Anatomy only include Jaina Lee Ortiz, Jason George, Boris Kodjoe, and Brett Tucker. The Grey’s Anatomy stars appearing on Station 19 are McCreary and Jake Borelli (Levi Schmitt).

Furthermore, the only photo from this Grey’s Anatomy episode released so far shows Maggie and firefighters Ben and Maggie seemingly in front of a hospital bed. This visual clue might mean that Robert Sullivan (Kodjoe) or Fire Chief Ripley (Tucker) is Maggie’s patient. As seen in Station 19‘s winter premiere, Sullivan is already undergoing physical therapy as a result of a harrowing injury obtained on duty. In that case, is the Chief due for a hospital visit? 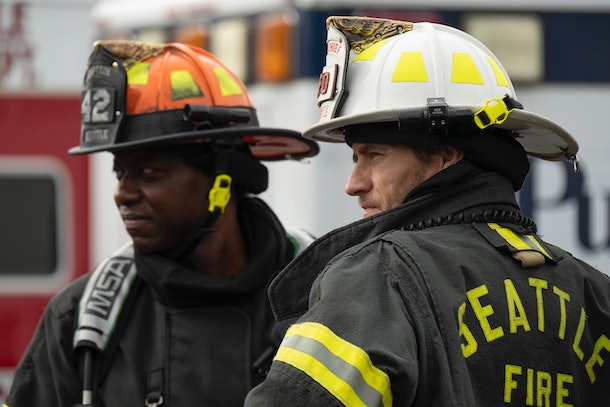 The summary for Station 19‘s April 18 episode suggests that it may end on a point that continues in the crossover event, reading:

Thanks to the mention of the coffee beanery in this blurb, it sounds like the hospitalized firefighter described in both crossover summaries is indeed the same person. While Station 19‘s May 2 episode summary focuses on its Grey Sloan connections, the synopsis of the Grey’s Anatomy episode reveals more. It reads:

Start crafting your crossover theories now. Season 15 of Grey’s Anatomy and Season 2 of Station 19 continue on Thursday, April 11, at 8 and 9 p.m. ET on ABC. The shows’ crossover event airs on Thursday, May 2.