Ariana Grande and Pete Davidson are reportedly calling it quits. The couple met on "Saturday Night Live" and became engaged just weeks after making their relationship official on Instagram in May.
Wochit

Ariana Grande is saying goodbye to any trace of former fiance Pete Davidson.

The newly single pop star, 25, appears to have covered up a matching tattoo she shared with the “Saturday Night Live” cast member. Grande posted a boomerang on her Instagram story Tuesday night of her clinking glasses with friends.

“I have no words to describe how much i love and am eternally grateful for these human beings who constantly help me turn lemons into lemonade and literally heal me and put me back together,” Grande wrote, tagging the names of friends who have helped her through hard times.

Fans, however, were quick to point out one thing. The “No Tears Left To Cry” singer’s “Reborn” ink that graced the side of her left hand was covered by a fern.

This is not the first tattoo Grande has masked.

The “Sweetener” singer, who broke off her engagement to Davidson earlier this month, used a Band-Aid to cover up her “Pete” tattoo during her pre-taped performance in NBC’s “A Very Wicked Halloween” musical TV special. 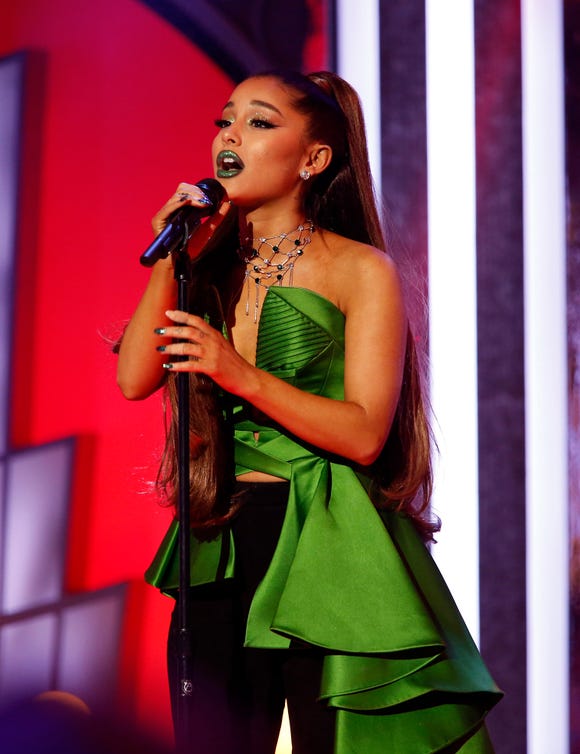 Davidson is also saying “sayonara” to the permanent ink that outlived their engagement.

The comedian was recently spotted on “Saturday Night Live” with a black heart in place of the “Dangerous Woman”-inspired tattoo he got behind his ear in honor of Grande.

The “SNL” cast member joked about the couple’s matching ink during his first stage appearance since their split.

“Um, I’ve been covering a bunch of tattoos, that’s fun,” Davidson said at the comedy show Judd & Pete for America on Oct. 20. “I’m (expletive) 0 for 2 in the tattoo (department). Yeah, I’m afraid to get my mom tattooed on me, that’s how bad it is.”

He continued: “So, obviously, you know … we broke up or whatever, but when me and (Grande) first got engaged, we got tattoos. And it was in a magazine like, ‘Was Pete Davidson stupid?’ And 93 percent said yes. So my boy, he was like, ‘Don’t listen to that (expletive) man.’ … And the other day we were in my kitchen and he was like, ‘Yo, bro. Turns out you were stupid.’ “

Related: Pete Davidson laughs off Ariana Grande split: ‘Does anybody have any open rooms?’