Ariana Grande is showing off her new ‘do.

The 25-year-old “God Is a Woman” singer debuted her new lavender hair color on Wednesday. Grande posted a photo to social media showing her striking a pose in a Polaroid image. “Lavender,” she captioned the post, adding on Instagram Story that the new look is “jus for fun.” 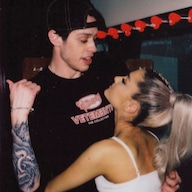 Earlier this week, Grande was spotted in the area where the movie’s being filmed, so her comment to Davidson could mean she’s heading back to watch him in action.

Davidson also changed up his hair color recently, bleaching it for his role in the movie. It was announced at the end of June that Davidson would be starring in the coming-of-age film, which centers on a 16-year-old boy who starts to follow in the footsteps of his friend, a college dropout (Davidson).

Machine Gun Kelly is also set to star in the movie alongside Davidson.