The fate of the Andrews government’s polarising pandemic legislation will be decided by a diverse group of upper house crossbench MPs who were shut out of negotiations in a move that almost cost Labor the whole bill.

The government had been banking on the support of three friendly crossbenchers – Reason Party MP Fiona Patten, the Animal Justice Party’s Andy Meddick and Greens leader Samantha Ratnam – to get its bill through the upper house with a one-vote majority, but the dramatic reemergence of ousted former Labor minister Adem Somyurek scuttled that plan. 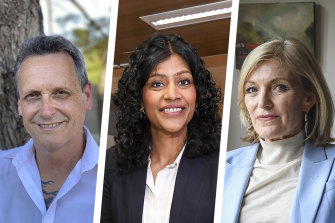 The Victorian crossbenchers (from left): Animal Justice Party MP Andy Meddick, Greens leader Samantha Ratnam and Reason Party leader Fiona Patten were involved in the negotiations for the bill and have received threats.Credit:

Derryn Hinch, leader of the Justice Party, accused the government of “disrespect” and “rejecting consultation” with the wider crossbench after the party’s MPs, Stuart Grimley and Tania Maxwell, were excluded from the initial negotiations and then, after Mr Somyurek upset Labor’s calculations, were urgently contacted by Attorney-General Jaclyn Symes.

Mr Hinch, who was a crossbench senator in federal Parliament, told The Age that the Andrews government’s negotiations had been “amateur” after Ms Symes reached out to his MPs late on Wednesday night.

“In Canberra, whether I was negotiating with Matthias [Cormann] or Bill [Shorten], they never called me at 11pm asking for a favour,” Mr Hinch said.

“It reflects the arrogance of the Andrews government and it’s an insult to the crossbench.”

Mr Hinch said Labor had come to rely on “three tame crossbenchers” and its plan had backfired.

“Why they didn’t think that their renegade MP would come back and blow it up is beyond me,” Mr Hinch said.

The proposed laws – the Public Health and Wellbeing Amendment (Pandemic Management) Bill 2021 – would replace existing state of emergency powers, empowering the premier and health minister of the day to declare pandemics and enforce health directions. Under the current system, the state’s chief health officer, who is not elected, has these powers.

If the existing powers lapse on December 16 without replacement legislation in place, the government will be unable to enforce crucial public health guidelines, such as quarantine and vaccine mandates.

With the return of Mr Somyurek, the government has been forced to negotiate with two independents, Sustainable Australia MP Clifford Hayes and Rod Barton, from the Transport Matters party, who had both been excluded from initial consultations.

On Friday, Mr Barton said the government was finally listening to other crossbenchers as negotiations continued into the weekend.

Jeff Bourman, of the Shooters, Fishers and Farmers Party, has dealt himself out of negotiations after he told Labor it would need to completely redraft its laws to receive his support.

“I think there’s a certain level of arrogance where they thought they didn’t need to speak to anyone else,” Mr Bourman said on Friday. 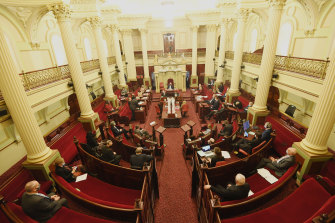 After the reappearance of Mr Somyurek, crossbench MPs were harpooning the government for a mess of its own making, while Opposition Leader Matthew Guy said it was “always going to end in tears” without broader negotiations.

The last-minute negotiations prompted Brunswick Greens MP Tim Read to call for reforms to the group voting tickets, which helped to elect many of the independents and micro-parties to the upper house.

Dr Read said they needed to be “abolished”.

“Group voting tickets distorted the will of voters, electing people they hadn’t heard of … making it harder to pass this essential legislation,” he said on Friday.

At Victorian elections, most people vote “above the line” for upper house candidates rather than numbering their first-to-last preferences for individual candidates. It results in preferences being directed according to deals struck by party bosses, and the election of micro-parties.

The federal government and some state governments have legislated to curb group voting.

The Morning Edition newsletter is our guide to the day’s most important and interesting stories, analysis and insights. Sign up here.‘