The Australian Securities and Investments Commission will be overhauled and the chairman of the corporate watchdog will step down despite being cleared following a formal review over revelations taxpayers paid almost $120,000 to cover his tax affairs.

ASIC chairman James Shipton claimed $118,557 for two years’ worth of tax returns in 2017 and 2018, triggering concerns from the Auditor-General and prompting Treasurer Josh Frydenberg to order a review. Mr Shipton agreed to repay the amount and the review has since cleared him of any misconduct. 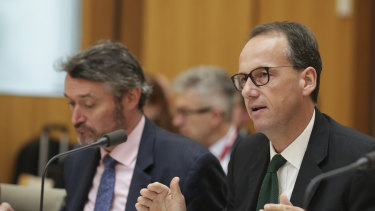 Mr Shipton will return to work on Monday but despite being absolved by the report, led by former Inspector-General of Intelligence and Security Vivienne Thom, he will leave when a replacement is found in the next three months.

Mr Frydenberg said at a press conference on Friday there had been “no adverse findings” relating to either Mr Shipton or former deputy chairman Dan Crennan, whose expenses were also scrutinised prompting him to bring forward his resignation.

Mr Shipton was on leave during the review. Tax experts have said the $120,000 tax bill is not extraordinarily high for a top-tier executive who has lived in multiple jurisdictions with a range of investments.

“After considering Dr Thom’s report and supplementary legal advice provided to the Treasury concerning these matters, I am satisfied that there have been no instances of misconduct by Mr Shipton concerning his relocation arrangements, including ASIC’s payment for tax advice resulting from his relocation to Australia in early 2018, nor have there been any breaches of applicable codes of conduct.”

Mr Frydenberg said there would not be a separation payment, but Mr Shipton would be paid for the time he is in the role until the replacement is found and this was “appropriate in light of the findings and the fact that that was a voluntary decision that he took at that time”.

Dr Thom made recommendations for improvements for “significant improvements” to the watchdog’s internal practices, systems and processes. This included internal audit management, quality assurance of legal advice processes and improving the management and control of spending by commissioners.

Dr Thom also raised concerns about the proper use and management of public resources, systems of risk oversight and cooperation between officials.

“Given the nature of the matters raised, the government expects ASIC to implement as a priority the recommendations made by Dr Thom concerning its internal risk, management and governance arrangements and to report to me regularly on its progress,” Mr Frydenberg said in a statement.

The review found Treasury could improve its processes of appointing statutory officers and a new system would be put in place “immediately,” he said.