A key body which scrutinised Australia's overseas aid program was quietly shut down last month, sparking accusations from the opposition that the Morrison government is trying to avoid independent evaluation of the development program.

The Department of Foreign Affairs and Trade has played down the move to shut down the independent body, saying its functions are being performed by the department. 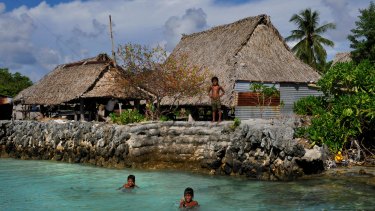 A portion of Australia’s foreign aid budget is being refocused, with the Pacific, Timor-Leste and Indonesia named as key priorities.Credit:Justin McManus

Diplomacy and aid experts have been voicing growing concern the $4 billion Australia spends on foreign aid is not enough at a time when China has been expanding its influence throughout the Indo-Pacific region.

The Office of Development Effectiveness was an independent branch of the Department of Foreign Affairs and Trade which reported directly to the department's secretary on the effectiveness of Australia's aid programs.

Appearing before a parliamentary inquiry into the repercussions of the COVID-19 pandemic, DFAT acting deputy secretary Kathy Klugman confirmed the ODE was "no longer a standalone entity".

Ms Klugman said the functions of the ODE were still being performed by "very good officers" within DFAT's Office of the Chief Economist and its aid and contracting division.

She said the decision was taken by the department, not Foreign Minister Marise Payne or Development Minister Alex Hawke.

"There have been some adjustments to the structure of the Department … in response to the fundamental changed tasks that we now need to perform," she said.

Labor's spokesman for international development, Pat Conroy, said Australians could no longer be confident their aid dollars were being spent effectively.

"The ODE has played a critical role in ensuring Australian taxpayers' aid funds are spent wisely and in assessing whether Australia's aid investments are achieving real outcomes in improving the lives of the poorest people in the world," Mr Conroy said.

In May, the Australian government shelved a major review of its $4 billion foreign aid program and instead redirected hundreds of millions of dollars over the next two years to help countries in the Indo-Pacific tackle the coronavirus pandemic.

At the time, the government said the total amount spent on aid – which equates to 0.2 per cent of gross national income – would not change under the COVID-19 plan, but a portion would be refocused, with the Pacific, Timor-Leste and Indonesia key priorities.

The Sydney Morning Herald and The Age revealed earlier this month the government was considering an aid proposal focusing on South-East Asia that would include funding to fight coronavirus and recover from the pandemic.

The plan, which has not been finalised, follows criticism from some aid groups that the government's Pacific “step-up” has come at the expense of South-East Asia.