They say you should never work with animals! BBC reporter explains why her jacket is stained during live broadcast from a chicken coop

This is the funny moment a BBC reporter today had to explain to viewers why she was covered in chicken poo.

BBC Breakfast hosts Jon Kay, 52, and Sally Nugent, 50, had been discussing the exponential rise in food prices and how chicken is the latest product to increase in cost.

Afterwards, reporter Nina Warhurst, 41, appeared on the show, live from a chicken farm in Holmfirth, West Yorkshire to add further information on the topic.

She explained that the cost of living crisis has caused the price of breeding and looking after the animals to rise and had a knock on effect on restaurants such as Nandos and KFC. 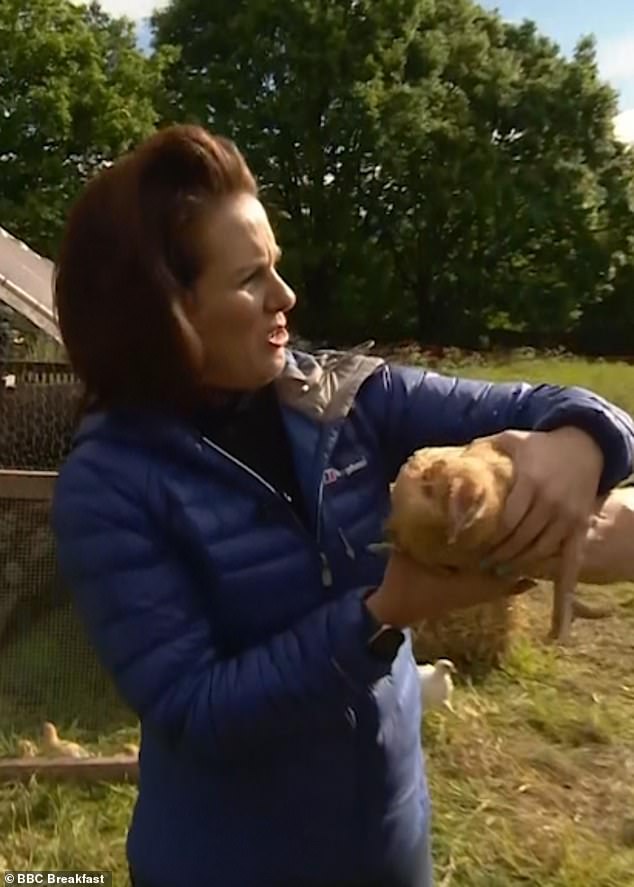 Nina Warhurst, pictured, appeared live from a chicken farm in Holmfirth, West Yorkshire to discuss the rising prices of the animal 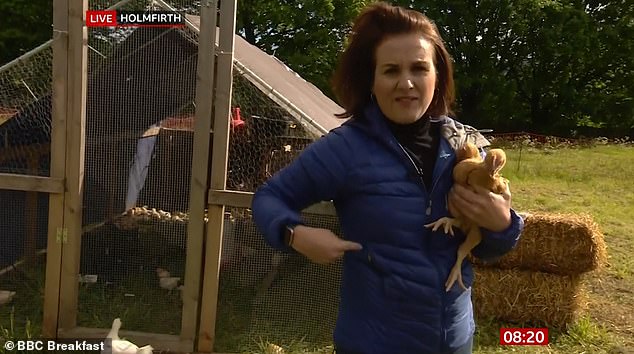 She pointed to her jacket, pictured, to reveal that a chicken had earlier pooed on her, in a moment of hilarity

Nina added a touch of humour to the end of her broadcast, pointing at and explaining the mark on her blue puffer jacket- chicken poo.

‘But if you were wondering down here if this is toothpaste from this morning…it is not.’

The presenters found the moment funny, with Sally saying: ‘Thanks Nina, for that image.’ 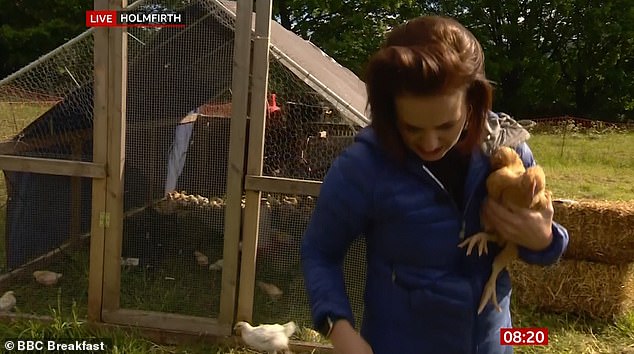 Presenter Sally quipped after Nina, pictured revealed the outfit blunder, ‘Thanks Nina, for that image’

In a post on her Twitter page before the broadcast, Nina wrote: ‘Chickens have gone up 50p/kilo in 2 years.

‘50% of our meat is poultry; how long can we afford the Sunday staple?

‘We will also bring you super cute chick cam live. And yes  one has already pooed on me.’ 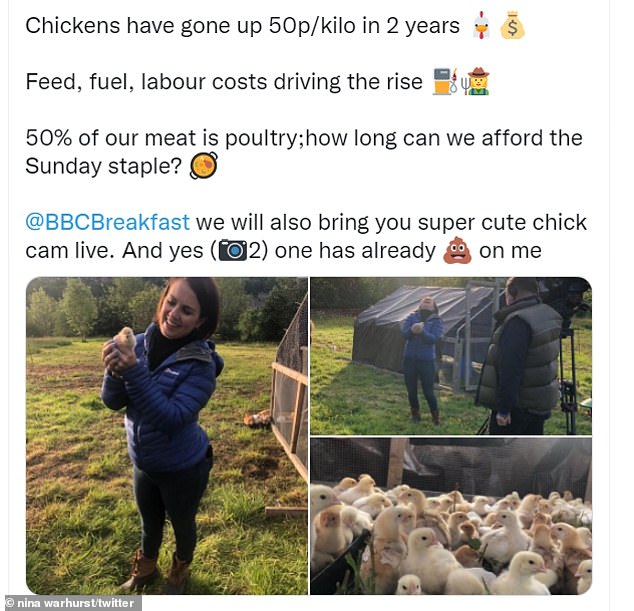 In a post on her Twitter page, pictured, before the broadcast, Nina wrote: ‘Chickens have gone up 50p/kilo in 2 years’

Viewers reacted with hilarity to the moment on television, with one writing: ‘Morning had to happen. I did giggle when you held the chick and said happy breakfast.’

Another wrote: ‘I thought you were fab Nina!’ and a third added: ‘Nice chicken graphics- something I never thought I’d say tbh.’

BBC Breakfast was also earlier praised after Jon spoke to Grant Shapps about Boris’s latest Partygate scandal, in which he appears to be in the midst of a gathering, raising a glass.

People were impressed with Jon, who was tough on the Transport Secretary.

Viewers reacted with hilarity to the moment on television, with one writing: ‘Morning had to happen. I did giggle when you held the chick and said happy breakfast’

BBC Breakfast airs daily from 6am on BBC One.