BEL MOONEY: My daughter is trapped in a marriage to a controlling husband

My daughter and I are very close and she has a problem with her husband — which I’m sure is a very common one.

I offered to email you on her behalf because he always checks her phone and what she’s been looking at on her laptop.

I could go on, but I’m sure you get the picture.

He has a very controlling nature and if he doesn’t get his own way, the atmosphere is unbearable.

They are opposites in the two most fundamental areas of marriage.

He is extremely sociable — almost over the top — and my daughter hates socialising apart from with family.

He is also very insistent on the physical side of marriage and it has got to the point where she dreads any contact with him. He believes the sexual act is the be-all and end-all of marriage.

Because of this, she has become almost phobic about the act itself — which is made worse because he’s always leering at her and making lewd comments, which she finds vulgar, and he tries to watch her showering.

My daughter has suffered from stress and anxiety almost since she met him and has lost all confidence. We have begged her to leave him, and she would if she was strong enough, but she has an autistic teenage son whom she thinks would be unhappy if she did.

He’s a lovely boy and will grow into an independent young man, I’m sure — so I think he’d be fine.

She also relies on her husband for both her home and the money he earns, because she doesn’t work. She has a comfortable lifestyle and would be happy to work if she felt better.

So what should she do?

Obviously leaving is the best option.

But if she hasn’t the courage, how can she persuade her husband to be less demanding in order for her to feel under less pressure — he tells her she’s not normal to feel like this?

Your opinion and advice would be most welcome. 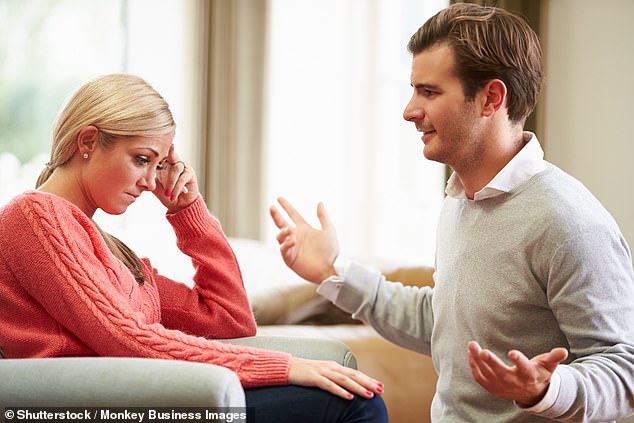 This is a very distressing story — and any mother in your situation would be worried.

It is a compelling sign of your closeness that your daughter is willing to share these intimate details with you. Thank goodness she can do this, because I imagine she would be unwilling to confide, even in close friends. Why? Because surely she would feel ashamed of him, yet reluctant to expose him to judgment.

Within this letter we have three issues. The first is the couple’s opposite attitudes to social life. That in itself need not be a terrible problem — unless your daughter’s husband compels her to go out or entertain when she really doesn’t want to. And something makes me think that’s exactly what he does.

Which takes us to the second problem — his controlling nature. This could actually be far more serious than you think, because what is now called coercive control is the kind of destructive bullying which leaves no bruises — except those on the mind.

In 2015, this was recognised and enshrined in law: after a Home Office consultation a new offence of ‘controlling or coercive behaviour in an intimate or family relationship’ was introduced — carrying a maximum sentence of five years’ imprisonment.

That he feels he has the right to check her phone and laptop, dictate their social life and insists on his own way at all times, punishing her with an ‘unbearable atmosphere’ — those three factors alone would indicate that she may well be a victim of coercive control.

Then there’s the behaviour known as ‘gaslighting’.

The term comes from the Forties play and film called Gaslight, in which a husband attempts to convince his wife (and others) that she is insane by manipulating small things such as the brightness of the gas lamps and insisting she is delusional. Gaslighting is a form of manipulation that can insidiously undermine all the victim’s confidence in his/her judgment and — ultimately — sanity.

It is a common aspect of coercive control. So when your daughter’s husband tells her that ‘she’s not normal’ to dislike his sexual demands, he is, in effect, subtly casting aspersions on her mental health. He is saying she is weird and neurotic.

No wonder you observe she ‘has lost all confidence’. That’s part of the pernicious pattern.

Then we come to the sexual behaviour itself — which is repellent and shows no respect. An angry chorus of baleful women, led by me, could tell this kinky bully that it’s 100 per cent ‘normal’ to detest the idea of sex with a man who treats you as a doormat, an accessory and a concubine — a kept women who has to get into bed on demand because he pays the bills. Horrible!

Like you, I think she should leave. How much is ‘a comfortable lifestyle’ worth when body and soul share a miserable lack of any comfort at all? He causes her ‘stress and anxiety’, undermines her and renders her unfit for employment — thus making her all the more dependent and a victim. It’s a bitter price to pay for a roof over her head.

I can offer no opinion on her autistic son, although his welfare is very important. How much an unhappy, browbeaten mother can be a support to him is only something you and she can know.

I would seek the advice of a solicitor, mention the control issues and see what options she has.

my feelings are so confused that I am no longer able to judge whether I am being supportive, or being taken advantage of, so I write to seek an objective view.

I have always wanted to please people and, consequently, have been overly generous with both my time and money. I have worked hard all my life. A single parent at 19, I studied law when my son was small and qualified.

I married a man much older and had another child. During our divorce, I gave him two thirds of my net worth so that my children could see I wanted to be fair. I believed that it was the right thing to do.

I was alone for five years, happily. And then an old boyfriend reappeared on the scene. He had three daughters who refuse to have anything to do with him and he returned to the UK from working in Australia.

He was well-paid and professionally well-regarded. When we began to see each other, he was very keen and, after a year, he moved in.

He was 52 when he came back. Now he is nearly 57. He has not worked during all that time and now makes no financial contribution at all.

He promises to repay what he owes me, but I am increasingly pessimistic. He claims to look for work, but finds nothing. I love him, but am at the end of my tether. Am I a fool, is he taking advantage of me — or am I just a bad person to think that?

TO me, it seems rather strange that you ask that final question, because nothing in your short email suggests you have done anything wrong.

How is being exploited by a freeloading man actually your fault? Trying to follow your thought processes, I wondered if you were alluding to some sort of cosmic ‘punishment’ — as if your bad fortune with two men is some sort of payback for things you’ve done wrong in life.

Your generosity to your first husband (two thirds — what was wrong with half?) indicates the truth of what you suspect: that some weakness in your nature turns you into a victim.

That’s a blunt way of putting it and yet perhaps you do need to be pushed further towards understanding these patterns.

You give no detail about either partner, but I imagine you were the breadwinner in the first instance. And here you are again. I would be interested to know why those daughters have nothing to do with their father. Also you say, ‘He was well-paid and professionally well-regarded’ in Australia, but did you just accept his word for that?

As a self-made woman who combined studying law with raising a child, you must have wanted to know the detail of his life. The cynic might add: no wonder he was keen to move in with a well set-up woman. Any fair-minded person will acknowledge that it is often hard for a man in his 50s (or a woman, for that matter) to find employment — nevertheless you sound suspicious as well as frustrated.

You do not trust him when he says he is looking for work and this has been going on for five years. I’m afraid your suspicion that he is lying could sound an ominous knell for this relationship.

Can anything be done? For a start, if you really love him and wish to save the relationship, you have to start playing hardball. Seriously, I would make a comprehensive spreadsheet of all outgoings and tell him it’s time for a proper meeting.

Go through everything in detail and tell him you’re worried about money — so what does he suggest? If he is totally skint (what happened to all the dosh he earned in those high-flying days?), then you must ask for a list of jobs he has gone for and work out possibilities together.

If there’s nothing at his level, you both have to scour the job ads — and if he has to get a post in a shop or washing cars, then so he must. It would be far worthier than sponging off you.

You asked me three questions. Are you a bad person? Of course not. Is he taking advantage of you? Of course he is. Are you a fool? I’m afraid most people might whisper: Yes.

My daughter Kitty’s two children and sweet new puppy were staying while she and her husband both worked away.

Fun with the kids was enhanced by mirth as the lively puppy teased our three dogs, even jumping up at the ears of my son’s labrador, also with us. (They live next door, so we look after each other’s pets when necessary.)

All was happy until Sunday afternoon — when Robin got the two grandchildren (six and three) in the car to go to a children’s party, and then we helped my elderly (97 and 95) parents in as well, to go home.

The demands, different ages, five dogs milling about, me waving goodbye . . . then, horror. Unnoticed, the puppy had wandered in front of the car and was hit. A split second later and the little creature lay dead in my husband’s arms.

A pseudonym will be used if you wish.

Bel reads all letters but regrets she cannot enter into personal correspondence.

One little dog’s cruelly premature death compared with big, terrible things that happen in our world may not seem much, but we berate ourselves. We’ve read of toddlers run over by their own parents and shivered at the thought of the grief and guilt. I’ve written reams about human, and pet, bereavement.

But both Robin and I even hate killing mice, and always rescue spiders, and nothing changes the fact that this living creature’s tiny heart stopped on our watch.

I can still feel the vulnerability of that soft body as I wrapped her in a towel and laid her gently in a silver box. In Kitty’s own words: ‘She had only been part of the family for five weeks, but we loved her. A dog is never just a dog.’

That one life was precious — and this terrible, ongoing sadness we all share is her legacy.