The anticipation of holding that tiny bundle of joy in your arms is what gets most women through the exhausting final stages of pregnancy. But for some mothers the bundle of joy can end up being not so tiny, arriving into the world the size of a three-month-old — or even bigger.

While the average newborn weighs 7 lb 5 oz (anything between 5 lb 5 oz and 10 lb is considered normal) spare a thought for the mums who birth babies as heavy as bowling balls.

Take Amy Smit, 27. Most new parents are rendered speechless at the first sight of their precious newborn, but Amy and husband Zac were both very vocal indeed.

Amy says: ‘Zac glimpsed him first and bellowed: “Look at the size of him!” When the doctors lifted him to show me, I said: “Bloody hell, he’s humongous — what does he weigh?!” ’ 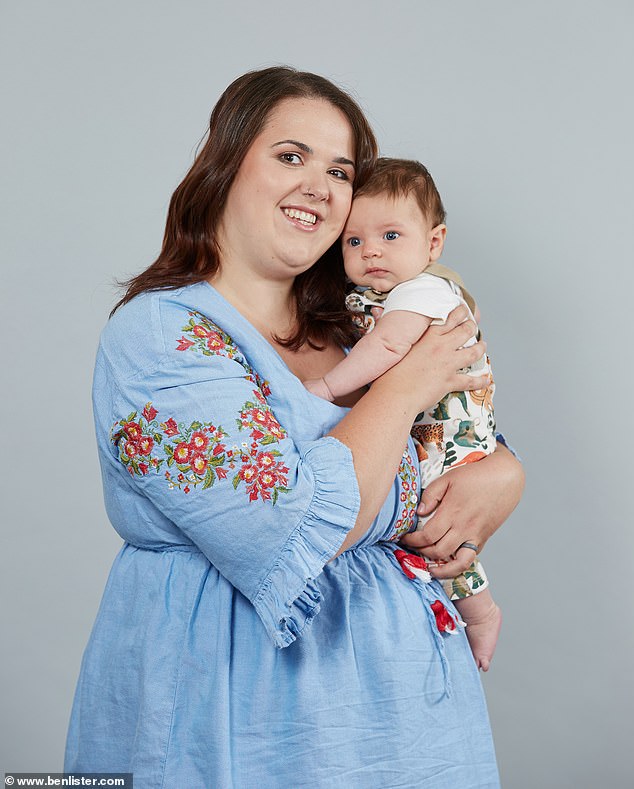 The mother’s of some of Britain’s biggest babies share their birth stories – including Amy Smit, 27, whose son Zeik (pictured) was born weighing 12 lb 9 oz

Hardly surprising that they were a little taken aback as their baby boy, Zeik, was born on March 25 this year, by elective Caesarean, weighing 12 lb 9 oz and measuring 2 ft long.

‘It took two members of the surgical team to lift him out of my uterus after the first called for help saying: “He’s too big, I can’t lift him”,’ recalls Amy. ‘They usually lay a newborn across the mum’s chest but were worried I might not be able to take his weight in my weakened, post-surgery state, so kept a hand on him throughout.

‘He was even too big to fit on the weighing scales, which meant they had to balance him on a makeshift plank to get a reading.’

Zeik could not squeeze into any of the nought-to-three-month-old size clothes the Smits had brought, so Zac, 28, had to dash back to their home in Cheddington, Buckinghamshire, to get the three-to-six-month outfits they had been saving for when he was older.

Despite her baby’s size, and his constant need for sustenance, Amy, 27, decided to breastfeed for six months before weaning her son. ‘Of course I worried at times that I wasn’t producing enough milk for him but my mum, who has six children, was a huge support and reassured me: “If he’s hungry he will cry; that’s what babies do.” ’

And Zeik certainly thrived. At six and a half months old, he weighs close to 2 st, estimates Amy. ‘He’s so big I have constant pain in my shoulders from carrying and picking him up,’ she says.

Bigger than average size certainly runs in the family. Both Amy and Zac, who runs a dog-walking business, are 6 ft tall, while their three-year-old Lola is already the size of an average six-year-old. Amy, who worked in sales before becoming a full-time mum, towered over her classmates at school, until the boys hit puberty.

Her large frame is, she says, the reason she could easily carry such a big baby with nothing more than the occasional bout of back ache, familiar to most pregnant women. 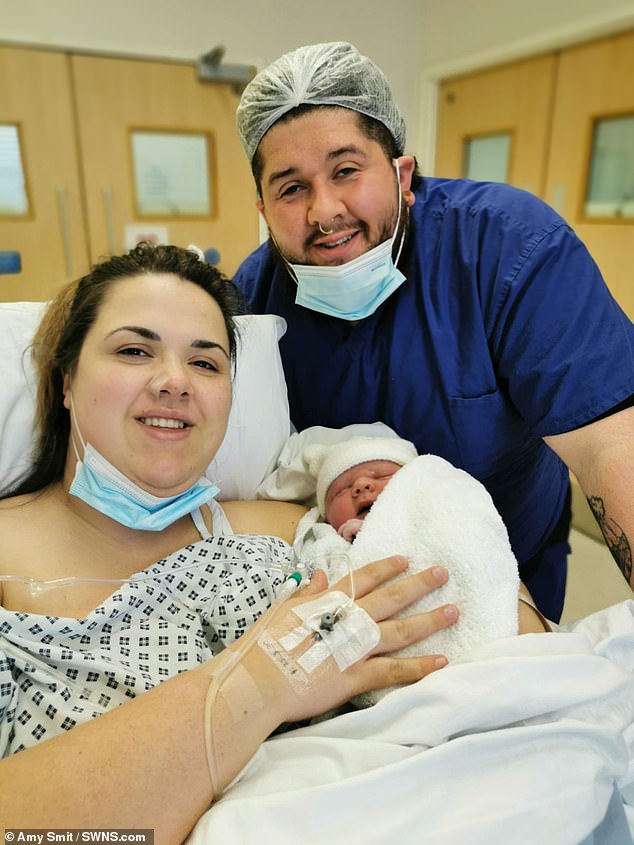 Amy said Zeik is so big that she has constant pain in her shoulders from carrying and picking him up. Pictured: Amy and husband Zac with Zeik

Like all women who have had a C-section, she was advised by her midwife not to carry anything heavier than her baby, until her stomach muscles had healed.

Amy says: ‘The midwife glanced at Zeik, who was wedged into the little plastic hospital cot, as she said it and added: “Really, you shouldn’t even be carrying him”.’

There are silver linings, of course. ‘Zeik has the perfect rugby player build so Zac, who is originally from South Africa, has high hopes for him on the pitch.’

Baby girls can be just as big, if not bigger. Emilia Cumberland was born in April this year, weighing an incredible 12 lb 14 oz, which made her the second-biggest baby girl born in the UK (the heaviest is Niamh O’Halloran, from Ipswich, who weighed 14 lb 4 oz in February 2012, while the record for the heaviest baby overall goes to Guy Carr, from Cumbria, who was born via a Caesarean section in 1992 weighing 15 lb 8 oz).

Mum Amber’s baby bump grew so huge in the weeks before she gave birth to Emilia that, if she stood up too rapidly, her stretchmarks, which circled her body, from her bra strap to her pelvic bone, actually bled. 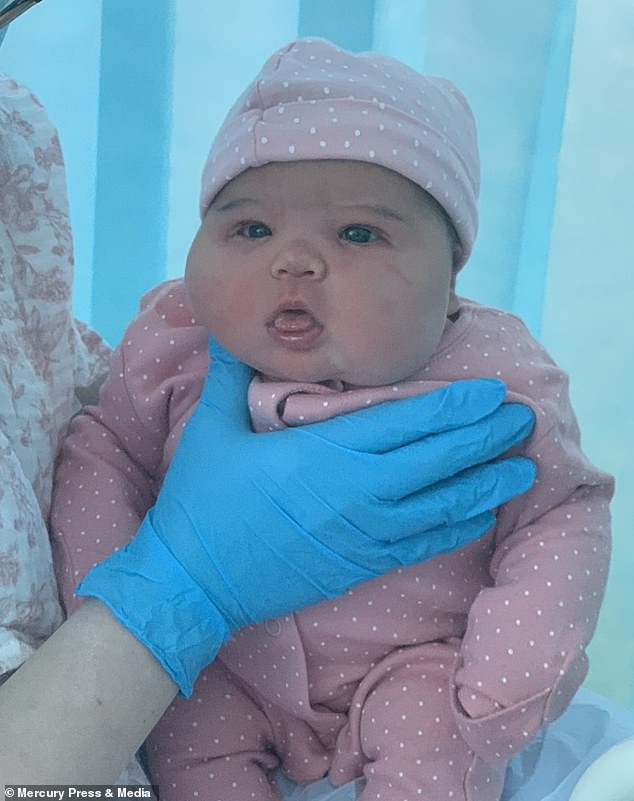 Emilia Cumberland (pictured), who was born in April this year, is the second-biggest baby girl born in the UK – weighing an incredible 12 lb 14 oz

A scan at 36 weeks revealed Emilia already weighed 9 lb 12 oz — 2 lb heavier than the average newborn. Despite this, Amber’s pleas to be induced at 38 weeks fell on deaf ears and, in the end, her baby was delivered on April 16, at Oxford’s John Radcliffe Hospital, two weeks overdue.

‘I fretted every day about how I was going to get her out — despite her size, I was told to try for a natural birth — although I knew I was going to end up having a C-section.

‘When they lifted her out — it took two people — my partner Scott’s face completely drained of colour and the surgical team were all looking at each other in shock.

‘As the doctor laid her on my chest he laughed: “Congratulations, you’ve had a toddler”.’

She was also too big for the newborn nappies Amber, 21, and her partner Scott, 22, had brought, so the midwives went in search of bigger ones from the paediatric ward.

Luckily, as well as newborn clothes, the couple, from Bampton, Oxfordshire, had brought outfits for babies up to three months old.

The delivery was by emergency Caesarean, after 18 hours in labour, when the obstetrician feared the baby might get stuck in the birth canal. 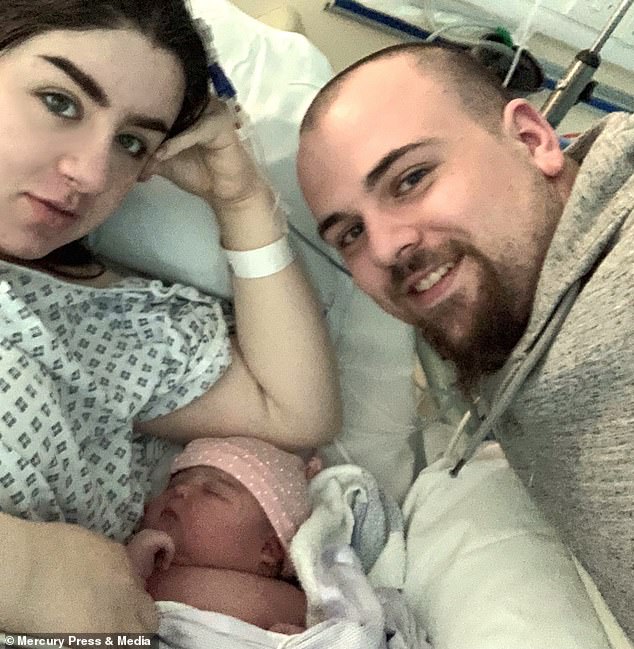 Amber said many people who saw her when she was pregnant assumed that she was carrying twins. Pictured: Amber and Scott with their daughter Emilia

Emilia’s weight was the talk of the maternity unit, and some midwives hung around at the end of their shift to have photos taken with the whopping newborn.

Despite all the attention, it was only when Amber and Scott saw their daughter beside an 8 lb newborn that they realised just how enormous she was.

‘Emilia filled the see-through plastic hospital cot whereas the other baby took up hardly any room,’ says Amber, laughing. ‘No wonder so many people who saw me when I was pregnant assumed I was carrying twins.’

Incredibly, Amber had spent the first half of her pregnancy worried her baby might be underweight as she had hyperemesis (extreme morning sickness) until the 24th week — and was admitted to hospital at one point to be rehydrated via a drip.

Thanks to anti-sickness medication, she was able to eat normally for a few weeks. However, by the third trimester, the baby was pressing on her stomach and she suffered constant heartburn, limiting her food intake once again.

Still, she managed to gain 5 st in weight, half of which she lost immediately after Emilia’s birth.

To accommodate her uterus, Amber’s stomach muscles separated completely — causing diastasis recti, a huge gap — and her gynaecologist has warned that it will be some time before they heal and knit back together. 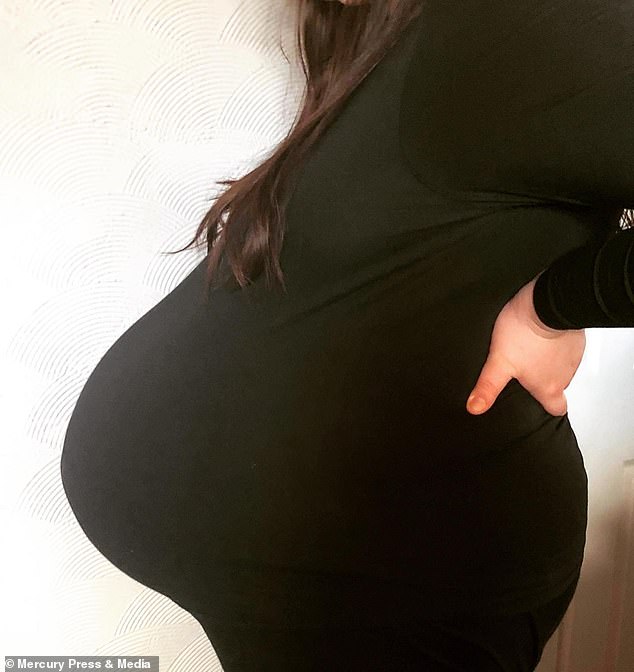 Amber has been advised to wait three years before her next pregnancy due to the toll on her abdominal muscles. Pictured: Amber’s pregnancy bump

This, says Amber, is the main reason she didn’t attempt to breastfeed her daughter as she feared having her baby lying across her stomach would add undue strain. As Emilia screamed for a bottle every two to four hours, a midwife told Amber she may have struggled to produce enough breastmilk to sustain her.

The toll on her abdominal muscles has led doctors to advise Amber to wait three years before her next pregnancy. ‘We’d like three children and wanted them close together, but we’ll now have to leave bigger gaps than we’d planned,’ says Amber.

Both relatively tall — Amber is 5 ft 9 in while Scott measures 6 ft 1 in — the couple have been told that, while this could lead to them having long babies, it does not explain why Emilia was so heavy.

When they do decide to extend their family, if the next one measures anything like as large as Emilia, Amber will insist on an elective Caesarean and ignore any medical advice to the contrary.

‘My stretch marks aren’t sore any more but they cover my whole torso and are deep purple,’ says Amber. ‘I try to avoid looking at them, I prefer looking at Emilia, instead, as she reminds me that it was all worthwhile.’

When Sheralyn Young, 41, first saw her baby, she too could scarcely conceal her shock. 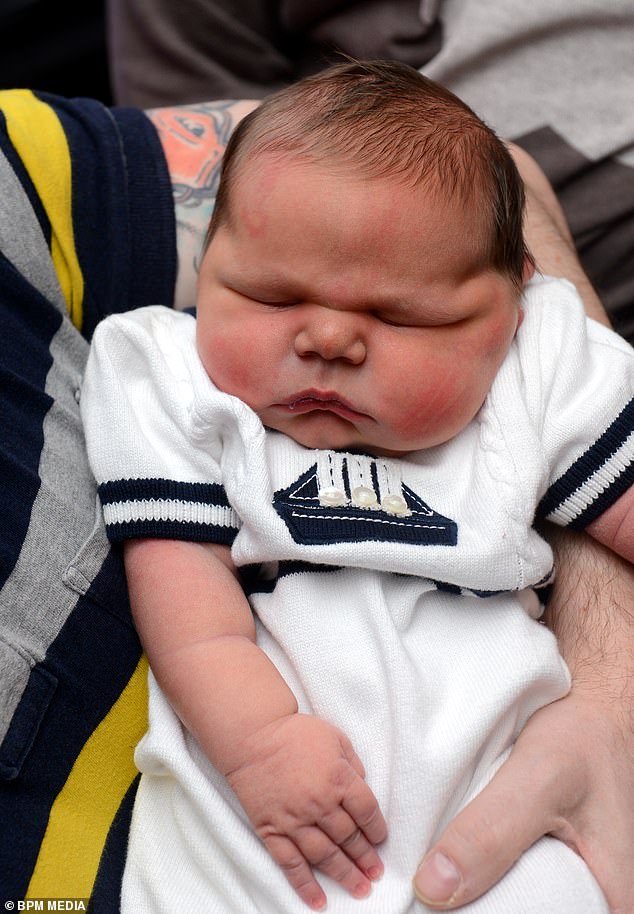 Brodey (pictured) was delivered, four days before his due date, in December 2017, weighing a supersized 12 lb 13 oz

‘My first thought when I saw him was: “It’s a baby sumo!” ’ recalls Sheralyn from Cleethorpes, Lincolnshire. ‘My second was: “Thank God I agreed to a Caesarean” — how would I have got him out? Rather than having rolls of fat, he was just completely solid.’

She hadn’t wanted a C-section, having given birth to her first two children vaginally, but her obstetrician was adamant, explaining her baby was likely to be so big, he couldn’t guarantee the safety of either mother or son.

‘That convinced me, of course,’ says Sheralyn. ‘No matter how scared I was, no mother would knowingly put her child at risk.’

And what a very wise decision it turned out to be as Brodey was delivered, four days before his due date, in December 2017, weighing a supersized 12 lb 13 oz.

‘Everyone in theatre knew he was going to be big, but, like me, no one expected him to be quite that size — when they weighed him all I could hear was people gasping.

‘I didn’t put on much weight anywhere other than my bump which was absolutely huge — in the final months I didn’t have much appetite at all as my stomach was so squished.

‘But I couldn’t walk around the supermarket without every other person pointing and saying: “Oh my god, look at that”.

‘Most assumed there was more than one baby in there.’ 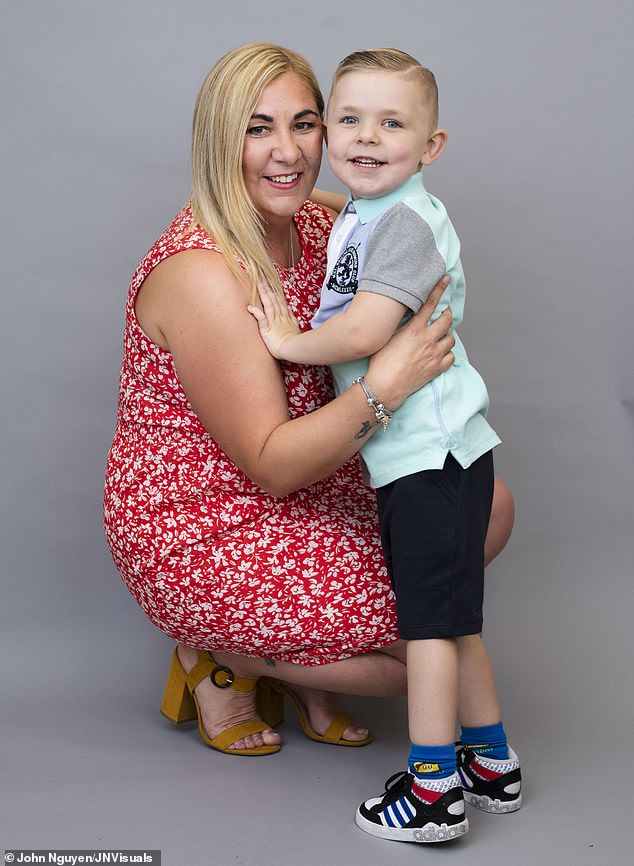 Sheralyn Young, 41, from Cleethorpes, Lincolnshire, said at three, Brodey (pictured) is in aged five-to-six clothes and ‘towers over his nursery pals’

Brodey broke the record for the heaviest baby born for a decade at Diana, Princess of Wales hospital in Grimsby, immediately filling his nought-to-three-month baby grows and guzzling down 70 ml of formula milk every three to four hours (compared with the 20 to 40 ml consumed by the average newborn).

Given that Sheralyn, at 5 ft 4 in, and her husband Rob, who measures 5 ft 10 in, are both average height, Brodey’s birth weight seems especially surprising.

Meanwhile their daughter, Payton, five, who weighed 9 lb at birth, is also tall for her age.

‘Even before the test confirmed I was pregnant with Brodey I had a bit of a bump, so I suspect he was above average size from the start.

‘Today, he will eat anything, from spicy curries to Sunday roasts, partly, I think, because he’s always having growth spurts.’ At three, he’s in aged five-to-six clothes and ‘towers over his nursery pals’.

Despite his skinny frame, Sheralyn, who works for Ladbrokes, and Rob, a store manager, still use the nickname they gave Brodey when he was born.

‘We call him Bruce, as in Bruce Bogtrotter, the character who eats all the cakes in Roald Dahl’s Matilda, which is a family favourite,’ says Sheralyn. ‘At three, he is a bit too young to understand that he was such a big baby he attracted both local and national media coverage, but hopefully he will enjoy the notoriety one day.’