Bride-to-be goes viral with her list of wedding rules, including no garter toss, bridesmaids can pick their own outfits, and anyone who wears white risks getting WINE poured on them

A bride-to-be has shared her list of wedding rules on TikTok, including that uninvited guests are unwelcome, most kids are not allowed, and any questions that arise on the big day must be directed to her mother.

Jasmine Cruz is engaged to be married and took to the social media platform to share her top 11 rules and preferences for the big day.

In the week since they were posted, her videos have gone viral, with commenters sharing enthusiastic agreement with her decision to skip the garter toss and let her bridesmaids pick their own dresses. 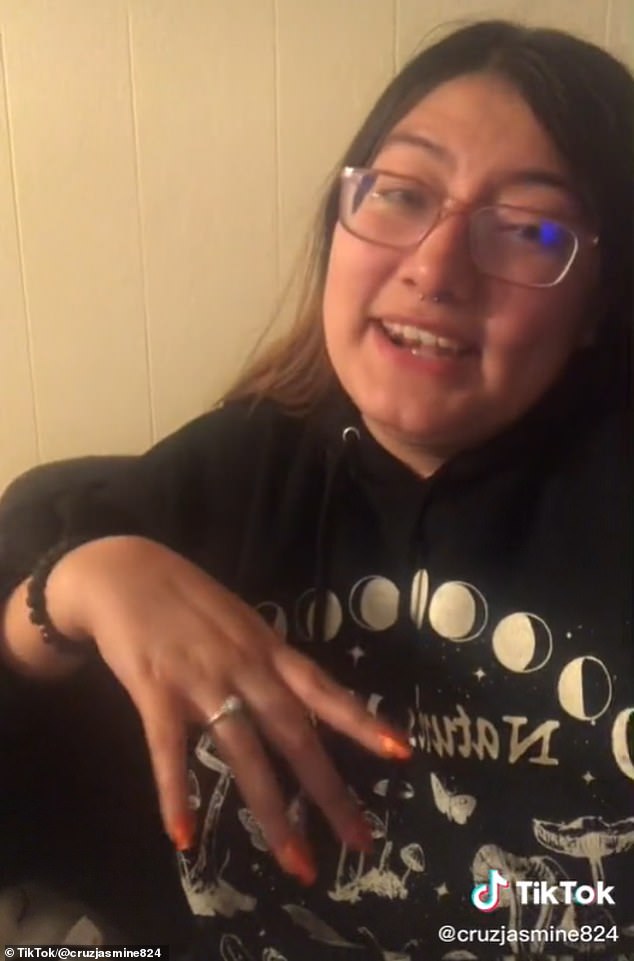 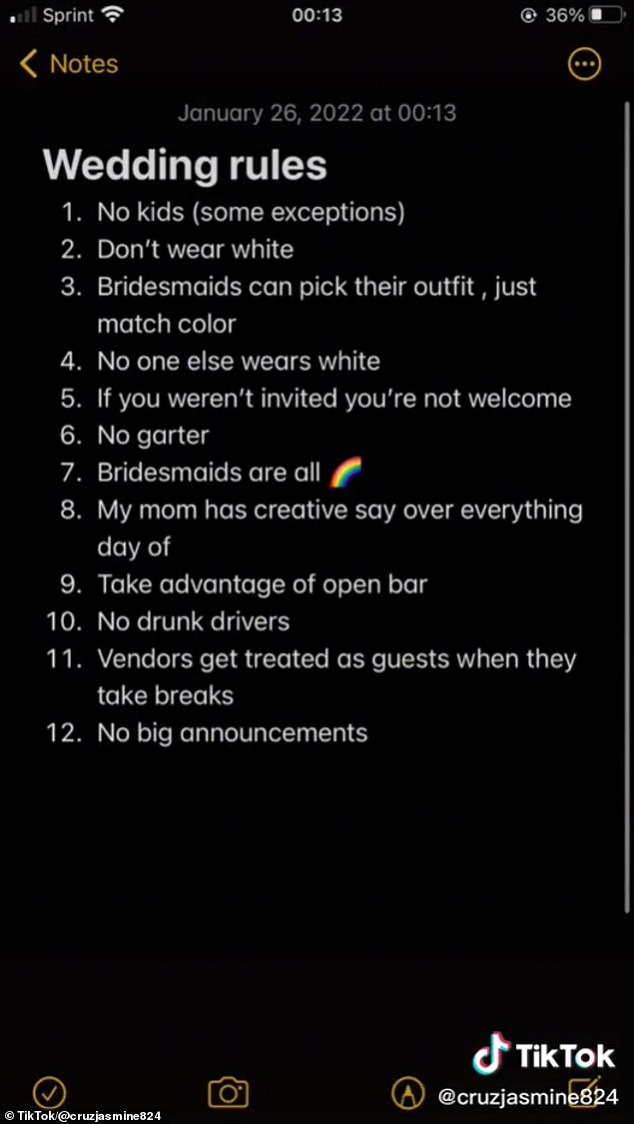 They include that uninvited guests are unwelcome, most kids are not allowed, and any questions that arise on the big day must be directed to her mother

Jasmine’s first rule is a soft one: no kids — with some exceptions.

‘I don’t want kids running around unattended with their parents not watching, that will absolutely not be happening,’ she said.

‘There are some exceptions. Most of my siblings are under the age of 15. Like half of them. So they can come, as well as some out-of-towners that genuinely cannot get babysitters for like the whole weekend because they have to travel — obviously they can bring their kids.

‘They gotta be watching them though,’ she added.

Her second rule is that no one is allowed to wear white — and it’s such an important one that she accidentally wrote it on her list twice.

‘My bridesmaids have specific instructions already to dump a whole bottle of red wine on you, so let’s just avoid that,’ she said.

Her third rule is that her bridesmaids can choose their outfits, as long as it’s in the color Jasmine picked out.

‘If they want to wear a dress, a pantsuit — I just have to approve it and see it first, just to make sure it flows well. But they can wear whatever they want basically,’ she said.

Her fourth rule is that anyone who wasn’t invited is not welcome.

‘I will specifically write on the invitation how many plus-ones you get, and that’s it. Don’t be bringing no random people to my wedding. I gave you those plus-ones for each [person] that I want at my wedding,’ she continued.

For number five, she said she has no plans for her husband to remove her garter and toss it into the crowd of bachelors.

‘That’s gross. I already have to kiss a man in public in front of all these people, now you want him to go under my dress and pretend to…’ she said, pretending to retch.

Rule number six is not so much a rule but a coincidence: All of her bridesmaids are LGBTQ.

Rule number seven is that on the day of the wedding, she doesn’t want to be bothered with details — so her mom has creative control.

‘Ask my mom. My mom has full creative liberty over everything. She designed my quinceañera and she made it perfect and we have been going back and forth about day of stuff,’ she said.

Her eight rule is that her guests all fully take advantage of the open bar. 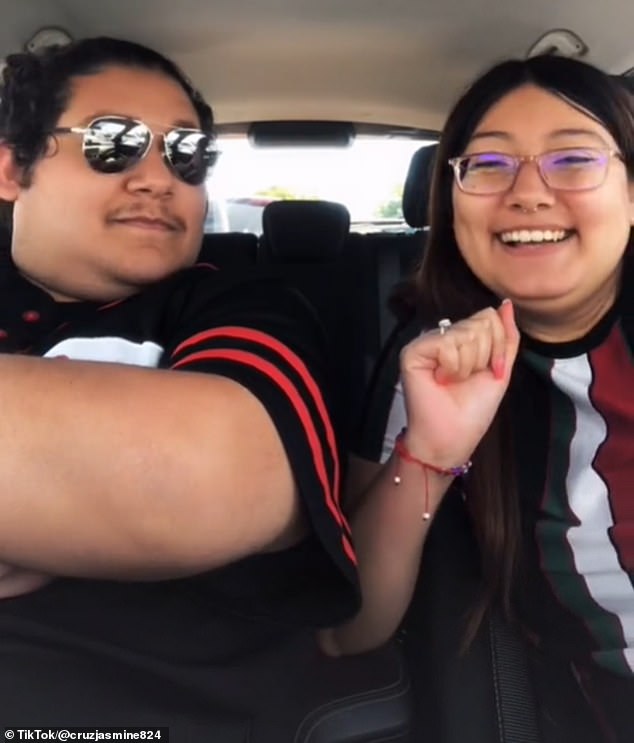 ‘I want you drunk, I want you wasted,’ she said, but added that this rule moves into number nine, which is no driving home drunk.

‘You guys can leave your cars there ’til the next morning — thank you to my venue for that,’ she said. ‘No drunk drivers.’

The penultimate rule is that her vendors will be treated as guests when they’re on their breaks.

That means they can eat, they can drink, and they can even take home party favors and centerpieces.

Finally, she conclude, no ‘big announcements’ are allowed.

‘If you’re pregnant, keep it to yourself. If you want to propose, keep that to yourself. Do not come to my wedding day taking the attention away from me and my man. You will be tackled.,’ she said.

Jasmine’s videos have earned quite a lot of attention, with the first one getting nearly two million views. 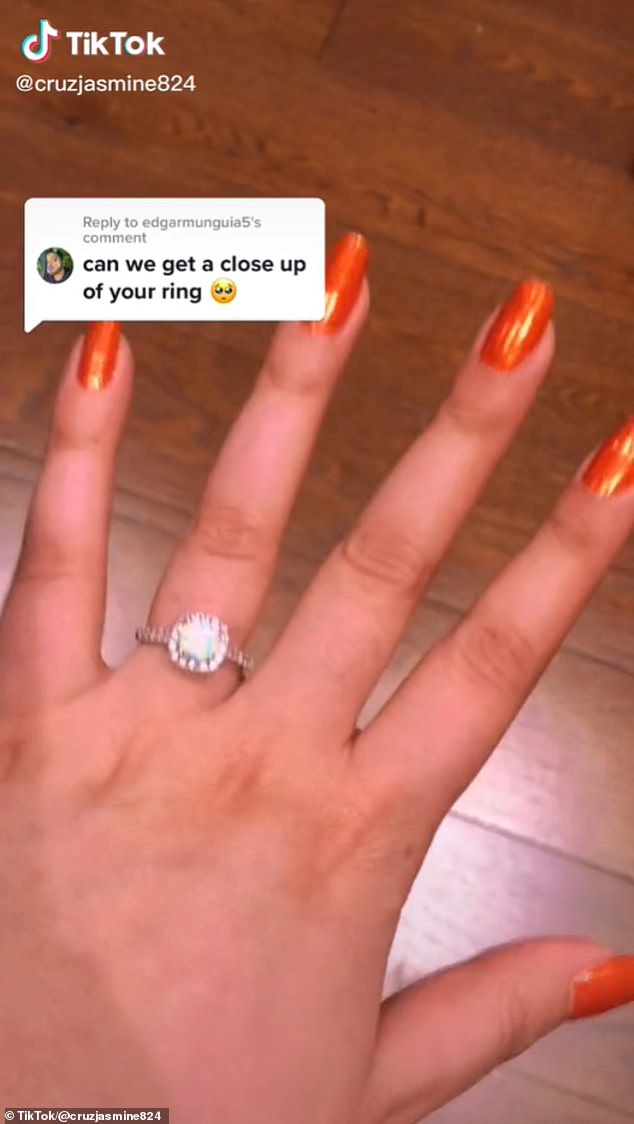 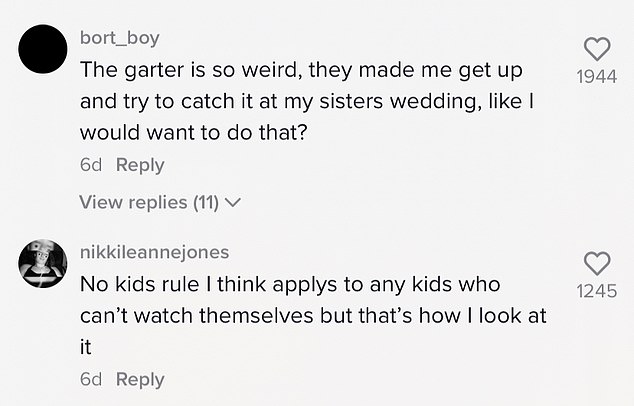 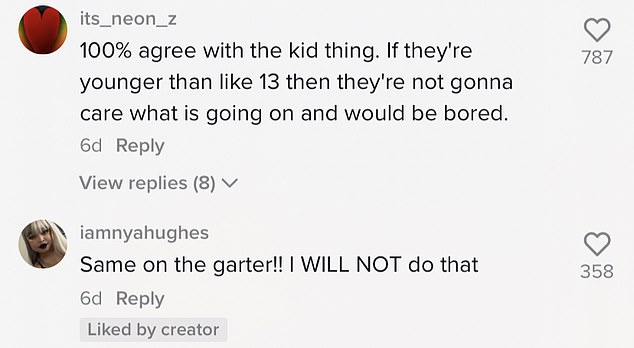 Several commenters chimed in to share agreement with some of her rules — particularly skipping the garter toss.

‘Love the no garter rule. It’s really a disturbing thing to do in front of family,’ wrote one.

‘The garter is so weird. They made me get up and try to catch it at my sister’s wedding, like I would want to do that?’ wrote another.

Others liked her no-kids rule, with one saying: ‘If they’re younger than like 13 then they’re not gonna care what is going on and would get bored.

‘The kids rule is very reasonable,’ said another, while a third wrote: ‘Kids don’t even like going to weddings.’

Another favorite was letting bridesmaids pick their own dresses. 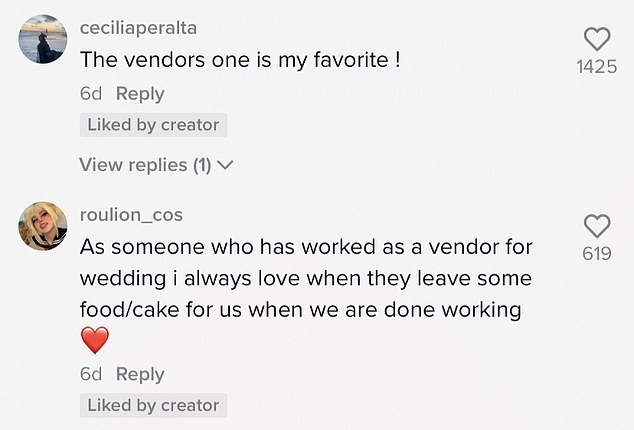 Others liked her no-kids rule, while others approved of letting bridesmaids pick their own dresses

‘Love the bridesmaid one! I feel like they know their body best and them being confident is important as well!’ said one.

However, she has had some critical comments, which she responded to in a followup clip.

One critic, oddly, had a problem with her rule against bringing uninvited guests, writing: ‘Why do people not want people at their wedding the more the merrier like why not why tf you gotta be so sam stingy and rude [sic].’

Jasmine explained that the wedding costs about $100 per person, and ‘you wouldn’t buy some random person a $100 meal.