Bride sells £995 designer wedding dress that she wore to marry her cheating ex-husband – to help fund nuptials with her transgender fiancé, who she says is ‘a REAL man’

A furious bride is selling the £995 wedding dress she wore to marry her cheating ex-husband – so that she can tie the knot with her transgender fiancé.

Martha Ward, 27, from Barnsley, South Yorkshire, advertised the Sophia Tolli-designed nuptial gown on Facebook, saying it still reeks of ‘deceit and dishonesty’, at the cut price of £300.

She married former partner Stuart Hargrave, 33, in a lavish £14,000 ceremony in 2012 but, after he cheated on her, they attended ten counselling sessions to try and save their relationship.

The pair couldn’t reconcile over his infidelity then decided to go their separate ways two-and-a-half years ago. A year later Martha met her fiance Oliver Black, 26, at a rugby match.

She is selling the frock to help fund their wedding next month, and has also said she will give some of the sale money to charity. 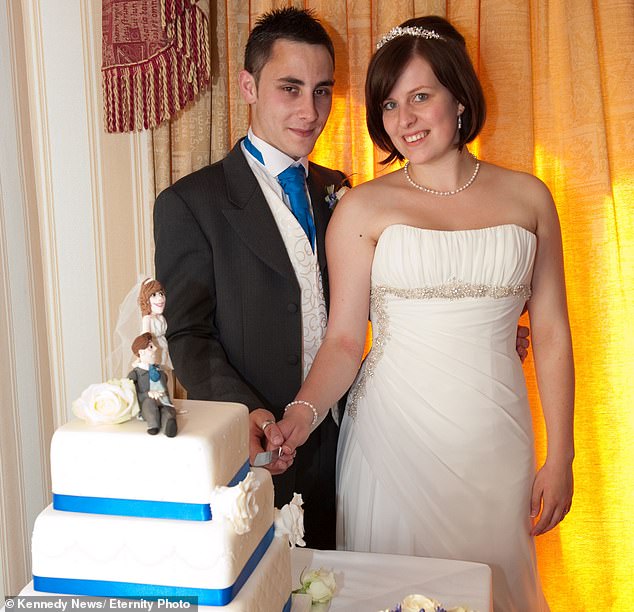 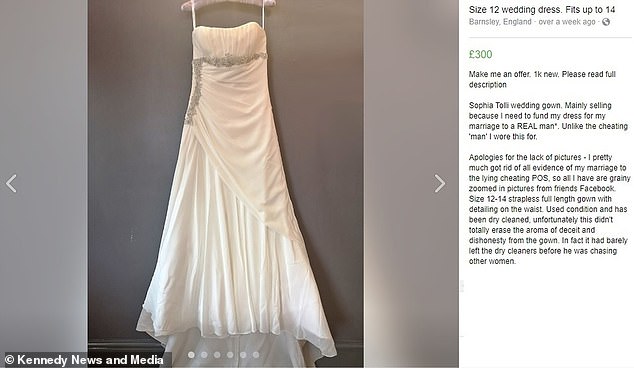 Putting the dress online and throwing in her veil, worth £150, and shoes, worth £60, Martha says that although it has been dry cleaned, the white frock still reeks of ‘deceit and dishonesty’ 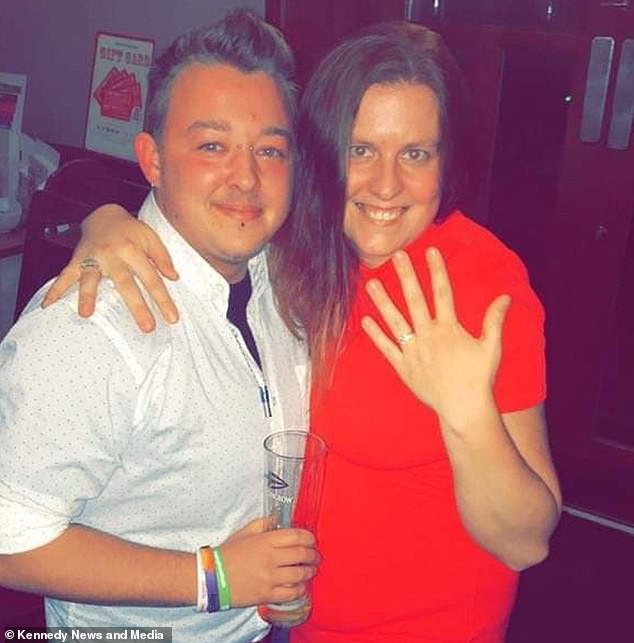 Martha Ward met her new partner Oliver Ward, 26, who is transgender, at their local rugby club. (The pair pictured on the night they got engaged)

In her post advertising the unwanted size 12 white frock, along with her £150 veil and  £60 shoes, Martha claimed the dress isn’t cursed – so future brides have nothing to fear.

She added that she had decided to part with it to avoid carrying baggage into her married life.

‘Sophia Tolli wedding gown,’ she wrote, ‘mainly selling because I need to fund my dress for my marriage to a ‘real man’ unlike the cheating ‘man’ I wore this for’.

‘Apologies for the lack of pictures. I pretty much got rid of all evidence of my marriage to the lying cheating Piece of s***, so all I have are grainy zoomed in pictures from friends’ Facebook.

‘Size 12-14 strapless full length gown with detailing on the waist. Used condition and has been dry cleaned, unfortunately this didn’t totally erase the aroma of deceit and dishonesty from the gown.

‘In fact, it had barely left the dry cleaners before he was chasing other women. 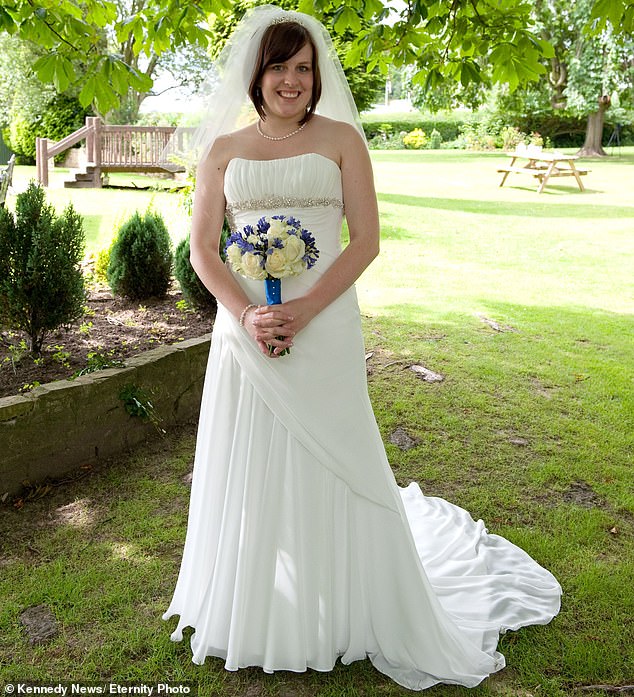 Martha, a chef from Barnsley, South Yorkshire, pictured wearing the dress on the day of her £14,000 wedding 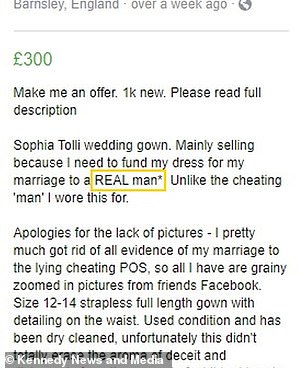 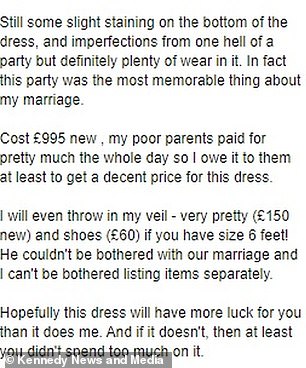 Posting the dress online for £300, the bride-to-be said that it is size 12 – 14 and full length, with detailing on the waist. The frock has also been dry cleaned 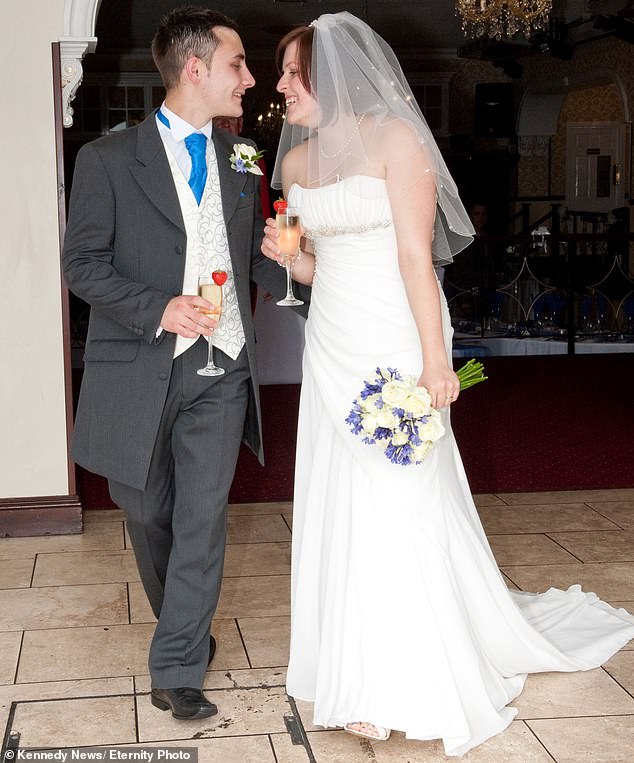 Martha, who is selling the dress to help fund her wedding next month, also remarked that her former partner had started chasing other women before the dress had left the dry cleaners

‘Still some slight staining on the bottom of the dress, and imperfections from one hell of a party but definitely plenty of wear in it. In fact this party was the most memorable thing about my marriage.

‘My poor parents paid for pretty much the whole day, so I owe it to them at least to get a decent price for this dress.

‘I will even throw in my veil – very pretty (£150 new) and shoes (£60) if you have size 6 feet! He couldn’t be bothered with our marriage and I can’t be bothered listing items separately.

‘Hopefully this dress will have more luck for you than it does me. And if it doesn’t, then at least you didn’t spend too much on it.’

The dress was stored in her mother’s attic before its sale. 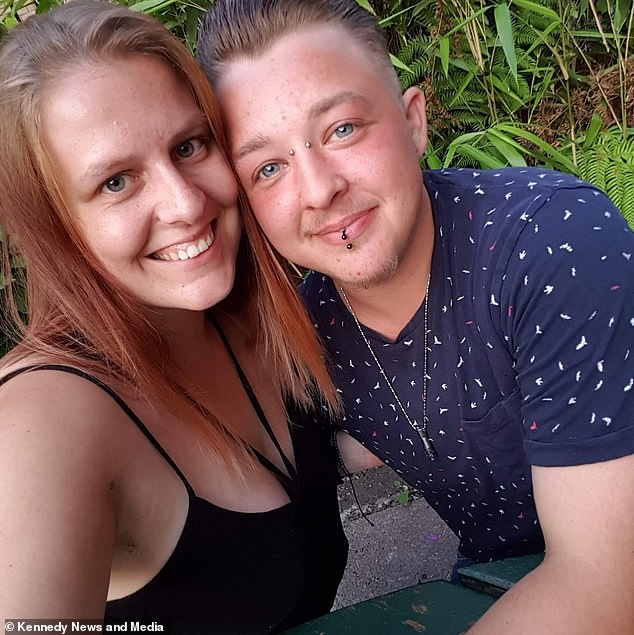 Speaking about her relationship with Oliver, Martha said they first got to know each other chatting off the pitch – and went to a Wetherspoons pub for their first date 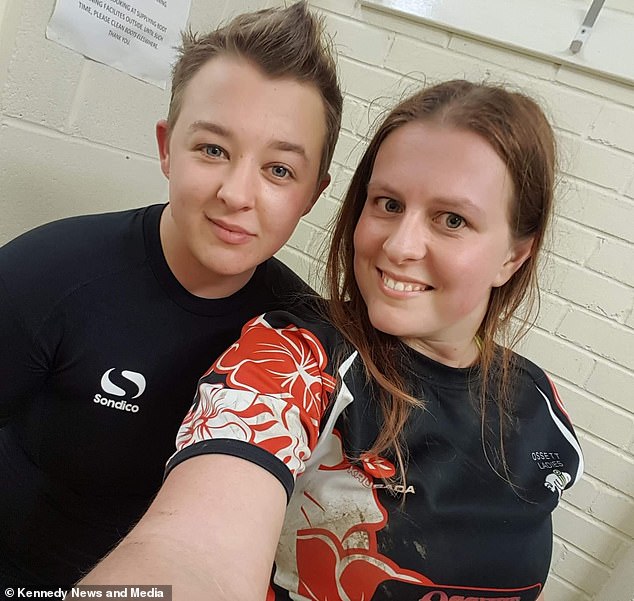 She added that the pair also started talking outside of rugby as, because of his transition, Oliver had to stop playing and training 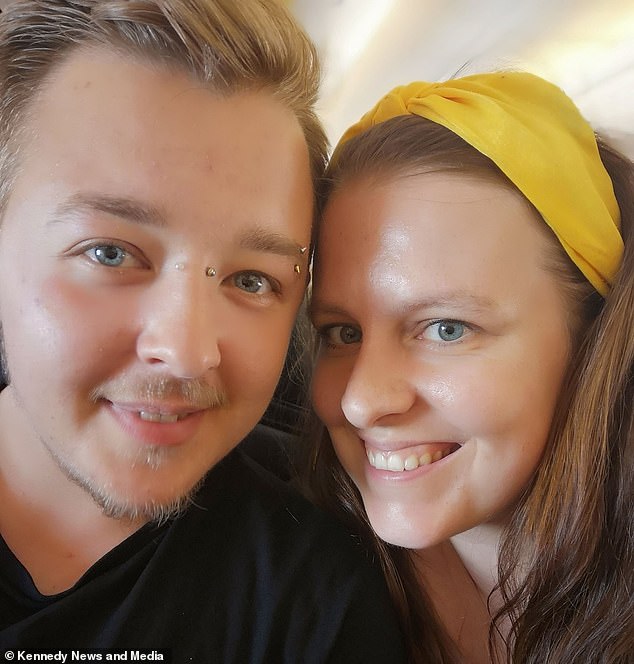 Loved up: the couple say they are ‘the same person’ and ‘finish each other’s sentences’

Martha met Stuart in 2010 when the pair worked in a casino – she was a receptionist and he was a dealer – before getting engaged ten months into their relationship.

They married in a £14,000 ceremony in July 2012 but, over time, their relationship fell apart after it emerged that Stuart had cheated.

The pair went to ten marriage counselling sessions to try and save their wedding, but it didn’t work.

‘I was very calm about the end,’ she said, ‘I wasn’t angry I was just done. It was like a switch had clicked in my head’.

‘I left and ended up getting a new house. He didn’t try and stop me, he knew the writing was on the wall.’ 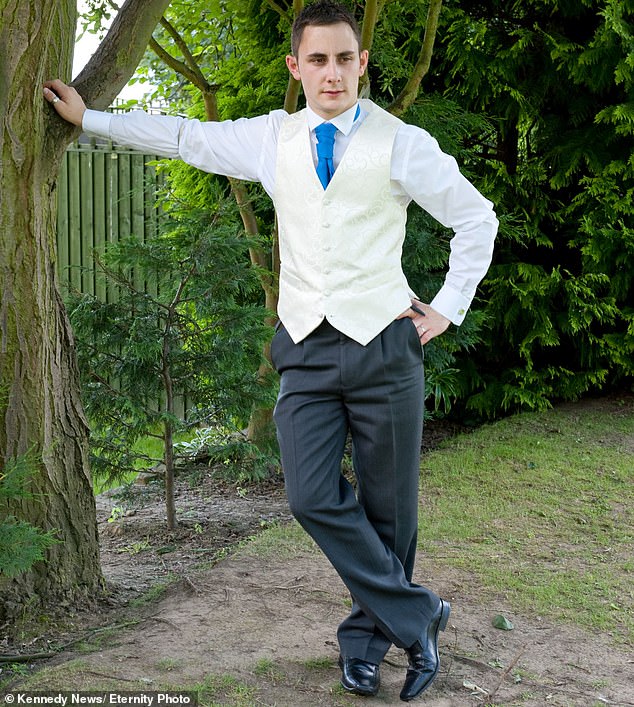 When contacted, Stuart said he did not want to ‘dredge up the past’ as both of them had moved on. (Pictured: Stuart posing for the camera on their wedding day)

Speaking about her upcoming wedding, she said she could not put her excitement into words and ‘can’t wait’ to be Oliver’s wife.

She met Oliver at a rugby match a year after her marriage ended.

Martha said: ‘We’ve been together since March 2018 and had known each other for about two months.

‘We met at rugby club training when playing for Ossett. He was a wing and I’m a prop – about as opposite as you can get.

‘We just started messaging and started talking outside of rugby, because of his transition he had to stop playing and training.

‘From chatting we got to know each other off the pitch and then got together – our first date was at a Wetherspoons.

‘I just fell in love with him as the man that he is. Me and Oliver, we’re the same person – we finish each other’s sentences and we make each other laugh. 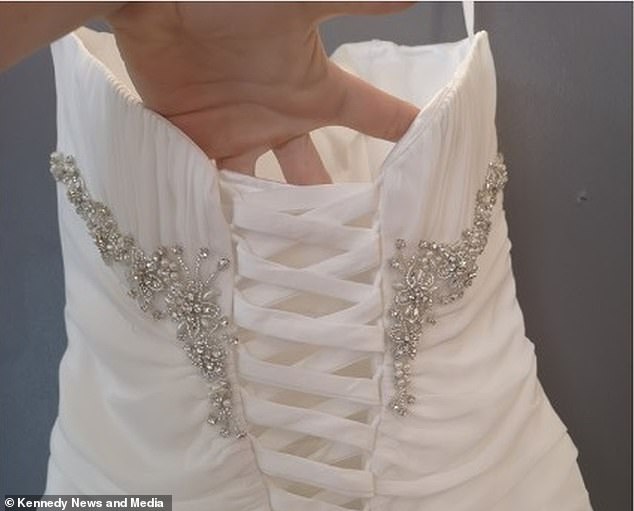 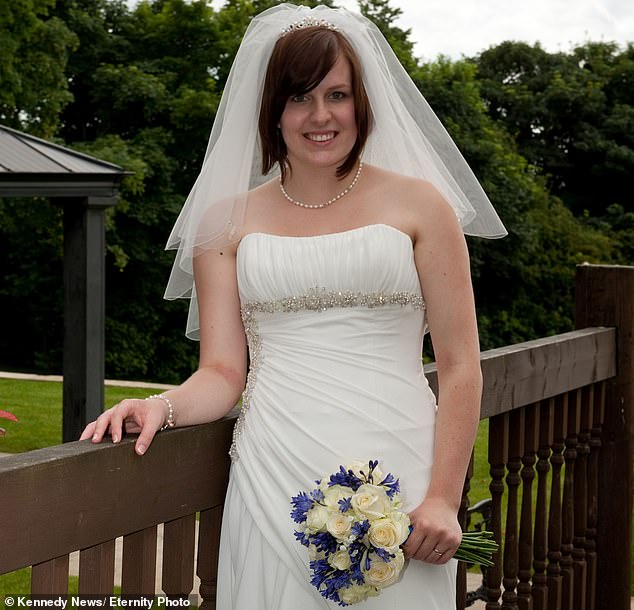 ‘Everything about him is special. The fact that I feel loved and respected.

‘I just feel like he makes me a better version of me. After what happened to me my trust was gone but to be able to trust him, I think that’s a big thing as well.

‘The dress isn’t cursed – it was the marriage. My wedding to Oliver is about the marriage not the wedding itself.’

When contacted for comment, ex-husband and master electrician Stuart said the pair split more than two years ago.

‘I could be here all day, but my time is precious and I don’t wish to dredge up the past. As I’ve said we’ve both moved on or so I thought,’ he said.

‘I’ve said I don’t want to get involved with my ex wife’s slanderous accusations and I’m also on holiday so this isn’t a convinient [sic] time and is causing a large amount of unwanted imotional [sic] distress at a time where I should be relaxing and enjoying myself.’