Très chic! Brigitte Macron, 65, puts on a leggy display as she and her husband host a dazzling state dinner for Japan’s Crown Prince Naruhito at the Palace of Versailles

French President Emmanuel Macron and his wife Brigitte rolled out the red carpet for Japan’s visiting Crown Prince Naruhito, with a state banquet at the Chateau of Versailles.

Brigitte, 65, put on a stunning display in a daring shift dress as she joined her husband, 40, for dinner with the 58-year-old future emperor of Japan.

France’s first lady was all smiles as she posed for photographs, before the trio enjoyed the special dinner held in honour of Prince Naruhito’s nine-day goodwill visit to France. 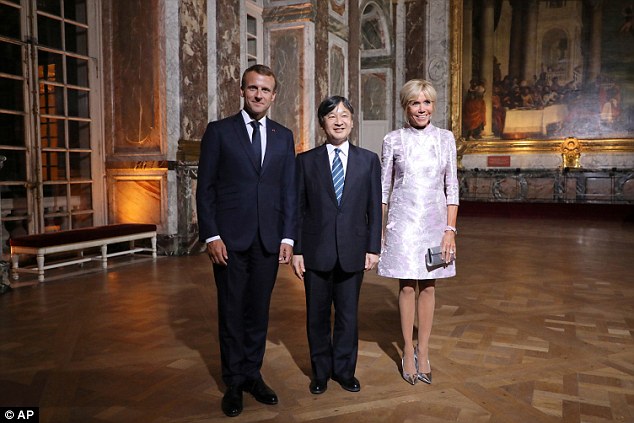 French President Emmanuel Macron and his wife Brigitte were pictured hosting Japan’s Crown Prince Naruhito, at the Chateau of Versailles on Wednesday

Ever the fashionista, she completed the ensemble with metallic silver shoes and a coordinating  clutch, wearing her hair in an elegant up-do.

Emmanuel and the prince looked dapper in well-cut navy suits as they posed in the opulent rooms of the palace.

The official dinner on Wednesday evening is one of the showpiece moments of the prince’s nine-day goodwill visit to France.

Macron and Naruhito began the visit by attending a theatre performance together at the sumptuous palace west of Paris. 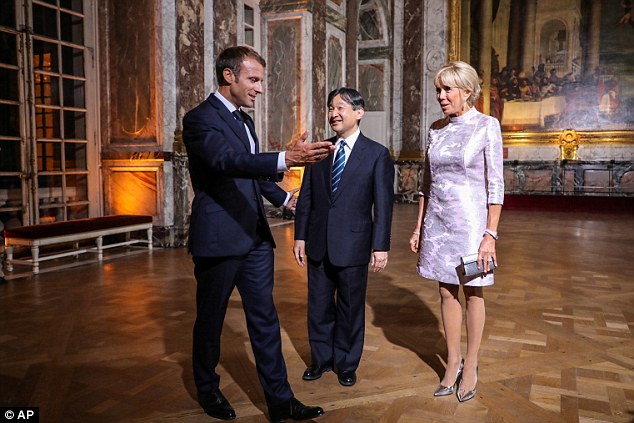 Brigitte, 65, put on a stunning display in a knee-length shift dress as she joined her husband, 40, in hosting the 58-year-old future emperor of Japan at the Chateua de Versailles

Brigitte is back in France after enjoying a state visit to Finland and Denmark with her husband amid the couple’s busy schedule.

In June of this year Brigitte’s daughter Auzière, 34, the youngest of Mrs Macron’s children from her first marriage, spoke out about her mother’s relationship with Emmanuel in a documentary.

She described how, at the age of nine, she watched her 39-year-old teacher mother fall for a 15-year-old Emmanuel.

Brigitte Macron: A French Novel aired on a state television channel, a year after she became France’s first lady when her husband, almost 25 years her junior, became the country’s youngest president. 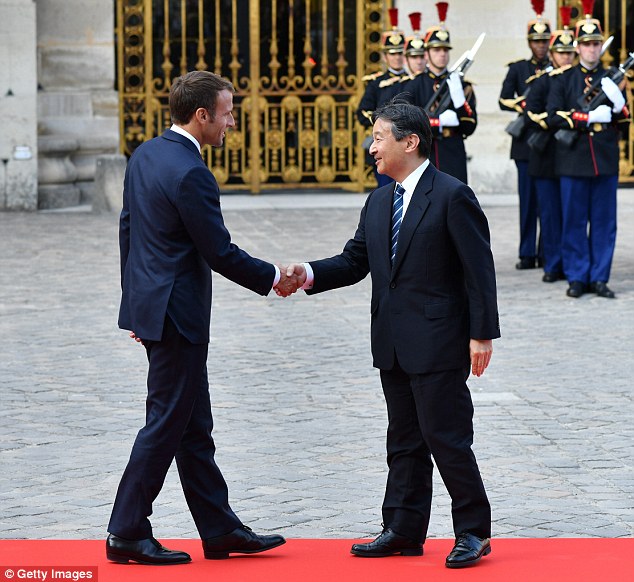 It presented Mrs Macron, 65, as her 40-year-old husband’s coach and muse and the couple as very much in love.

It detailed what happened after Macron, at the age of 16, declared his love for the drama teacher in 1994.

Macron was sent away to finish his schooling in Paris, but they maintained a long-distance relationship for 13 years.

After Brigitte finalised her divorce, he convinced her to marry him in 2007 and the couple are frequently pictured putting on besotted displays, despite the initial backlash they experienced upon Emmanuel’s election.