A blogger who calls herself ‘Britain’s greenest mum’ has sparked controversy after calling for balloons to be banned.

Zion Lights, a mother-of-two, called balloons ‘wasteful’ because they are only used once and then end up in the sea and in the stomachs of whales and dolphins, she said.

A campaign launched to stop people releasing helium balloons and sky lanterns -because once they deflate they fall into the ocean and don’t degrade properly – was up for discussion on GMB on Monday.

Ms Lights said that in an era of ‘catastrophic’ climate change, ‘unnecessary’ items like balloons need to be prohibited in order to save the planet.

Her comments were slammed by GMB viewers, who said campaigners now want to ‘ban fun’. 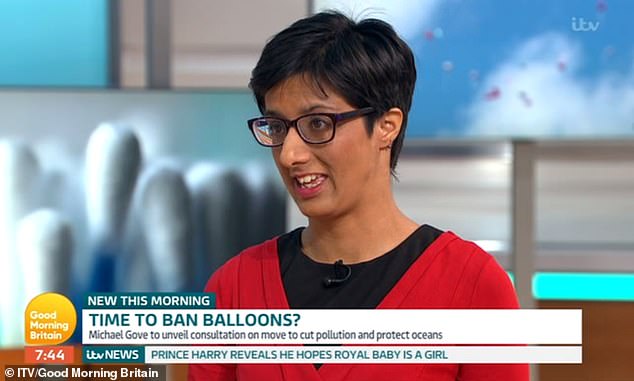 Zion Lights, a mother-of-two, called for a ban on balloons because they pollute the sea and end up swallowed by whales and dolphins. Pictured: Ms Lights on Good Morning Britain on Monday

She told how balloons take up to seven years to break down – and even longer in the sea.

Ms Lights said the image of balloons needs to be changed, and they should be viewed as something wasteful rather than a bit of fun, in the same way that the public perception of plastic straws has been changed by campaigners.

She explained: ‘We need a cultural shift and a change in our lifestyles and the way we behave, in our consumption. This is one of the things that needs to happen.

‘We live in an era of catastrophic climate change, our planet is cooking because of our wasteful lifestyles.

Her comments were slammed by GMB viewers on Twitter (pictured), who said campaigners now want to ‘ban fun’

‘These are not necessary items, we’re very privileged to have had them for a long time. We needed to ban these things 10 years ago yesterday.’

Good Morning Britain viewers said campaigners are trying to get everything banned, and dubbed them the ‘fun police’.

One tweeted: ‘Imagine a world where children don’t know what a balloon is or have never played with one. Such a depressing thought.’

‘Just ban everything including oxygen,’ another posted. 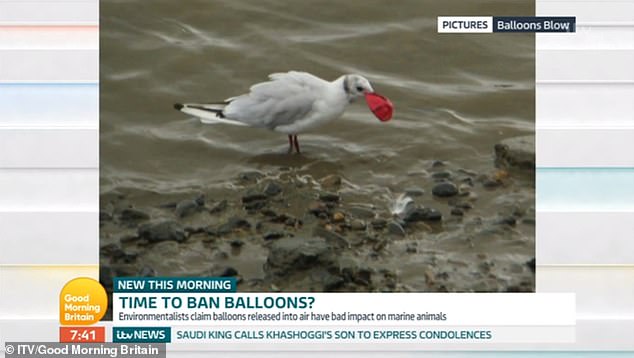 Campaigners are trying to sotp people releasing helium balloons and sky lanterns because once they deflate they fall into the ocean and don’t degrade properly. Pictured: A seagull with  a balloon 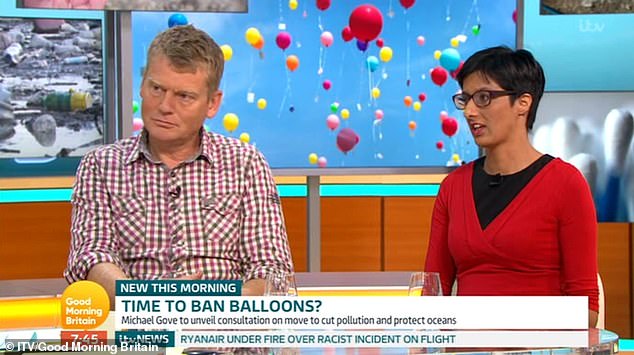 Countryfile presenter Tom Heap, 52, said the problem with balloons is them being released and not people having fun with them. Pictured: Heap (left) with Ms Lights (right) on Good Morning Britain

A third said: ‘Won’t have anything left to ban in about 50 years.’

Ms Lights was on the show with Countryfile presenter Tom Heap, 52, who doesn’t support the proposed ban, arguing that the problem lies with improper disposal and not people having fun.

He explained: ‘They are immense fun, they are good exercise with kids; I’d rather my kids play with balloons all the time than computer games all the time. This is a disposal problem primarily, this is not a problem with the balloons.’