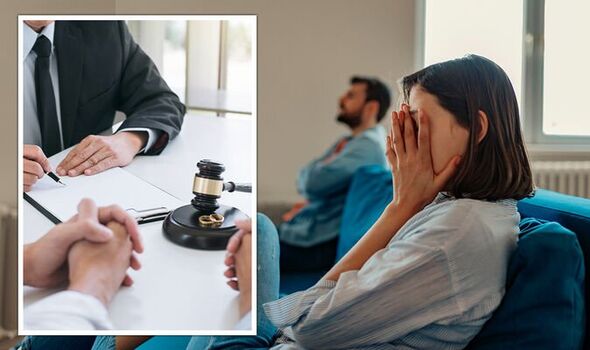 Under current law in England and Wales, people can only get a divorce without the spouse’s consent if they have lived five years apart. Otherwise, a marriage has to be broken due to adultery, unreasonable behaviour or desertion.

From April 6, however, the new Divorce, Dissolution and Separation Act will come into play.

This will be the biggest change in divorce laws in over half a century.

The change will see fault removed, and instead, a couple, or just one individual, could show the marriage is broken.

An individual will be able to prove the marriage has fallen apart by simply stating they are very unhappy.

Robert Buckland, justice secretary when the Bill passed in 2020, said the change is to “stop divorcing couples having to make unnecessary allegations against one another and instead help them focus on separating amicably”.

He explained: “By sparing individuals the need to play the blame game, we are stripping out the needless antagonism this creates so families can better move on with their lives.”

However, other people like Helen Thorn, are glad they could officially state that their spouse was to blame.

Helen said: “My husband betrayed me, but under the new no-fault divorce law our split would be no-one’s fault.

“I found it incredibly important that I filed my divorce under adultery because that is why the marriage ended.

“When you’re really fragile, it’s validating when the reason is there in black and white.

“When you’re the aggrieved party, and when you have experienced betrayal, and such trauma of finding out about an affair, it was important to me,” she told i.

Looking for a new home, or just fancy a look? Add your postcode below or visit InYourArea

Yet Thorn, from podcast comedy duo Scummy Mummies, said: “Divorce is also about moving forward, it’s about acknowledging the end of something, but it really signifies the beginning of something new.

“If you can start off amicably, then that is also incredibly important.

“Sometimes it wasn’t anyone’s fault, and people had to fit their reason for divorce into a box, and make things pettier than they are.

“But for me, it was important to be able to cite adultery because one day I was married, and then next day I found a love letter that revealed a completely different man to the one I knew for 20 years.”

Julian Hawkhead, a senior partner at Stowe Family Law, commented: “Couples will find the divorce process less painful to deal with and there will be fewer recriminations against each other under no-fault divorce.

“Ultimately the no-fault divorce changes have been designed to end the blame game,” he told The Independent.