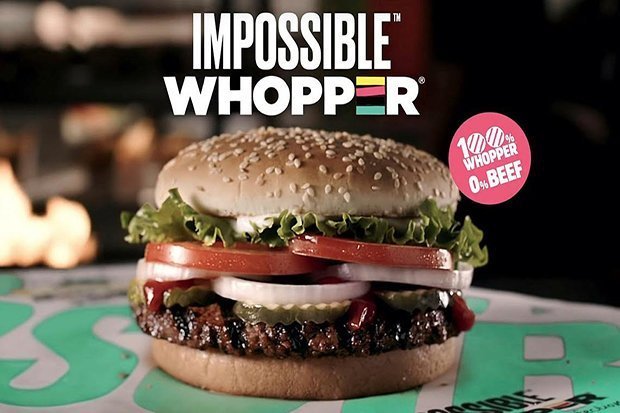 If someone had told you just five years ago that Burger King would unveil a meat-free whopper, you’d probably never have believed them.

But such is the growth of veganism and vegetarianism that even notoriously carnivorous chains are now catering to that market.

Burger King this week introduced their “Impossible Whopper” in an attempt to attract more veggie customers.

The meat-free sandwich is made with plant-based patties from Impossible Foods.

The fast food giant will trial the new product in 59 restaurants in the US city of St Louis, for now.

But if the veggie friendly burger is a success it could be rolled out at branches internationally.

While the chain has had vegetarian options before, the difference is that the Impossible Whopper is designed to mimic the look and taste of real meat.

The patties are cruelty free and have much less of an environmental impact than breeding and raising livestock.

While completely suitable for vegetarians, vegans will have to make sure they order the burger without the mayonaise to make it compatible with their diet.

The unveiling of this meat alternative at Burger King is just the latest in a growing trend of big brands attempting to appeal to the vegan and vegetarian crowd.

In January, Greggs made headlines when they introduced their “vegan sausage roll” to the masses.

The popular bakery chain later announced record sales in the wake of the snack’s launch and they regularly struggle to keep up with demand.