‘Eyes still closed I guess’: Burger King hilariously roasts Kanye West on Twitter after the rapper announced his love for its rival, McDonald’s

Burger King went after Kanye West on Twitter after the rapper said McDonald’s was his favorite restaurant on Sunday.

In a sassy response about Kanye’s obsession with its rival, the restaurant chain wrote on its United States-based Twitter account: ‘Eyes still closed I guess.’

This joke comes after Kanye went on a Twitter rant last week after he decided to distance himself from politics. ‘My eyes are now wide open and now realize I’ve been used to spread messages I don’t believe in,’ the 41-year-old rapper wrote at the time. 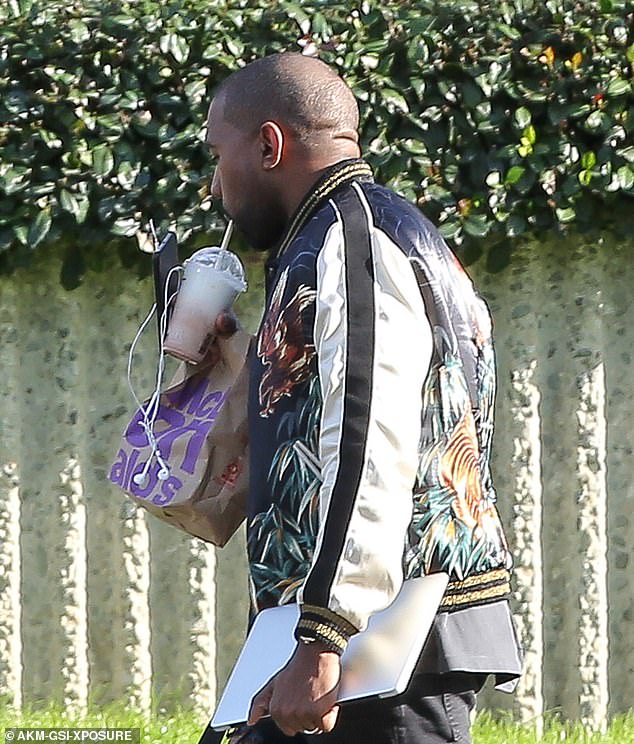 He loves it: Kanye West, 41, has previously expressed his love for McDonald’s by writing a poem and being pictured with the fast-food chain

Interesting: On Sunday, the rapper decided to tweet that McDonald’s was his favorite

Joining in: The savagery continued after the United King-based Burger King also decided to roast Kanye and his tweet

But the company was not done with roasting the 41-year-old rapper on his taste for fast food. The United Kingdom-based Twitter account for Burger King then wrote: ‘Explains a lot’.

Kanye has not kept his love for McDonald’s a secret over the years as he has previously admitted that the chain was his favorite brand.

In 2016, Kanye penned a poem to McDonald’s as part of Frank Ocean’s album entitled Blonde.

The 29-line poem showed the rapper feelings towards the fast-food chain and what the food items could be up to with out customers knowing.

‘I always knew them French fries was evil man/ Smelling all good and s***/ I don’t trust no food that smells that good man,’ three lines of the poem read.

Now the rapper is expressing his love for McDonald’s through Twitter.

Creative: Wendy’s joined in on the fun of making fun of Kanye’s tweet

True: One person commented on the post with a hilarious connection to a lyric in one of Kanye’s songs

Fair point: Another commenter said Wendy’s was the best at the Twitter game

Burger King wasn’t the only fast-food chain that decided to roast Kanye on Twitter for his controversial love of McDonald’s.

Wendy’s, which is known for posting hilarious tweets, came after the rapper by writing, ‘I’m my favorite restaurant.’

Fans of the account then commended Wendy’s for its response and added in their own thoughts about Kanye’s now-viral tweet.

One person hilariously responded, ‘Wendy’s loves Wendy’s like Kanye loves Kanye,’ while another person said the fast-food chain’s twitter account is the ‘dopest’ in the business.

Surprisingly, McDonald’s has yet to publicly respond to Kanye’s confessed love for its food, but the company is not as active on its Twitter accounts like its competitors.