For a limited time chocolate lovers will be able to taste the deliciousness of the original chocolatey goodness of the Cadbury Twirl, now, with a hint of zesty orange. The new bar is the first ever flavour innovation for Cadbury Twirl in the UK and as a limited edition bar, is only available to buy while stocks last – which won’t be long. News of its imminent arrival were leaked earlier this month, leading to an early high demand amongst chocoholic fans everywhere.The firm favourite introduced by Cadbury UK as a single bar in the early 1970s is created using top secret flake technology to give it’s unique texture and ripple like layers inside.

Rumours swirled on social media platforms last month that the chocolate bar was going to be available in orange – and the company later confirmed the news, much to the delight of chocolate fans everywhere.

A spokesperson from Cadbury revealed some good news for fans, and said: “We knew it would be hard to keep the news under wraps for long – glad you’re all as excited as we are for the launch of the limited edition Cadbury Twirl Orange.”

Radhika Pai, Brand Manager for Cadbury at Mondelez said: “We are very excited to share Cadbury Twirl Orange with chocolate fans in the UK, especially after seeing all the recent enthusiasm and anticipation for the product.

“Our expert chocolatiers have crafted the perfect blend of delicious Cadbury chocolate and orange. We can’t wait for people to try it for themselves and let us know what they think.”

Cadbury fans, from all over the UK, took to Twitter to ask supermarkets where they could get their hands on the 65p limited edition bar. Many started using the hilarious hashtag trend #twirlhunt. 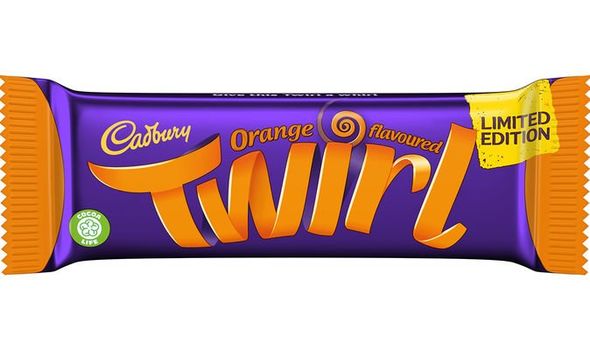 One twitter user commented: “Well, it’s no all doom and gloom in 2019 mates. On the hunt for these!” when referring to the bar. Twitter user @_JoshMorris branded Cadbury’s Chocolate Orange Twirl as an “absolute game changer.”

Others pleaded with the big supermarkets on Twitter to reveal whether they knew if any are in stock. One excited fan tweeted Asda, Sainsbury’s and Tesco and said: “Have any of you stocked the orange twirl yet?”

Others becomming more frustrated tweeting: “I NEED to find me an #OrangeTwirl! Went to Asda, Sainsbury’s and Tesco and couldn’t find them!!!!”

Another joked saying: “Do you think the orange twirl may contain some vitamin C?”

Just like its predecessor the Twirl, the chocolate bar is made out of two textured and rippled bars, but with an extra zesty kick – think Twirl meets Terry’s chocolate orange. 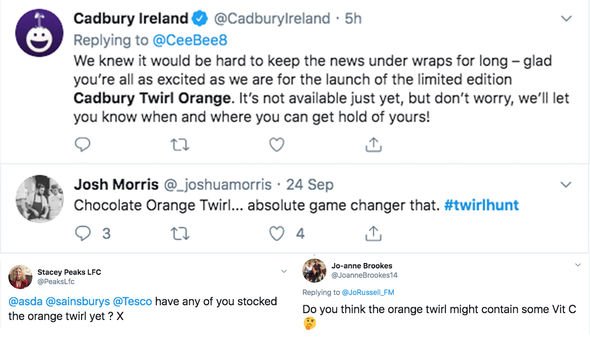 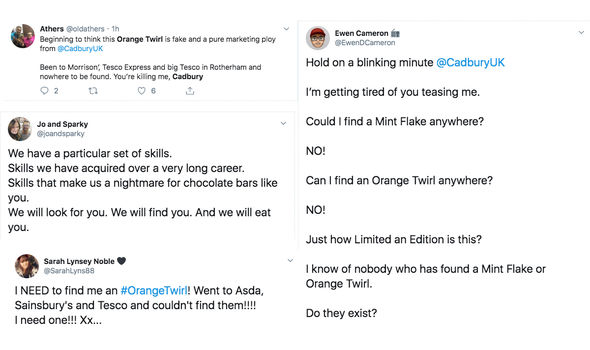 With the news that the orange chocolate bar would be released this week from the 23rd, some Twitter fans were confused to whether it was actually a reality or not, with one Twitter user who goes by the name of @oldathers stating: “Beginning to think this Orange Twirl is fake and pure marketing ploy from @CadburyUK.

“Been to Morrison’s, Tesco Express and big Tesco in Rotherham and nowhere to be found. You’re killing me, Cadbury.”

And another Twitter user commented: “Hold on a blinking minute @CadburyUK I’m getting tired of you teasing me.

“Could I find a Mint Flake anywhere? – NO!

“Could I find an Orange Twirl anywhere? – NO!

“Just how Limited as Edition is this? Do they exist?”

Another put a fun spin to Liam Neeson speech from Taken saying: “We have a particular set of skills.

“Skills we have acquired over a very long career. Skills that make us a nightmare for chocolate bars like you. We will look for you. We will find you. And we will eat you.”

Although the orange flavour chocolate bar is currently available in the UK to all supermarkets, grocery stores and convenience stores, it might take a few days for it to appear on shelves. So keep your eyes peeled for the zesty chocolaty treat near you.