Camilla Parker-Bowles’ Fashion: Her Best Looks Through the Years

Camilla, 75, and Charles, 74, welcomed Cyril Ramaphosa, the President of South Africa, to the U.K. on Tuesday, November 22 — the first state dinner hosted by the British royal family since then Donald Trump was elected as President of the United States in 2016.

The queen wore a royal blue gown by Bruce Oldfield to match the dazzling accessory, along with the blue Order of the Garter sash and the Dame Grand Cross of the Royal Victorian Order star and sash. She topped off the regal look with a matching necklace and bracelet from the royal vault.

Tuesday marked the first time Camilla sported the tiara, which was previously owned by Elizabeth, who famously wore it for her visit to Singapore in 1989 and when welcoming China to the U.K. in 2015.

The George VI tiara was initially added to the sapphire set — which includes the necklace, bracelet, three rings and drop earrings — in 1963. The necklace was bought for Princess Louise of Belgium in the late 19th century, but it ended up in the royal vault after she sold her jewels to pay debts, per the Daily Mail.

Princess Kate was also in attendance with her husband, Prince William, choosing to wear Queen Mary’s Lover’s Knot tiara, which she paired with a gem-embellished white gown.

The Prince and Princess of Wales, both 40, welcomed Ramaphosa, 70, at London’s Corinthia Hotel earlier on Tuesday, before traveling to the Horse Guards Parade where Charles and Camilla had the full pageantry of the British state on display.

The royals then showed the South African president through London to Buckingham Palace via a royal carriage ride before hosting a private lunch and an exhibition in the Picture Gallery of Items from the Royal Collection. Later, Ramaphosa visited Westminster Abbey to lay a wreath on the Tomb of the Unknown Warrior and viewed the memorial stone for Nelson Mandela — South Africa’s president from 1994 to 1999. 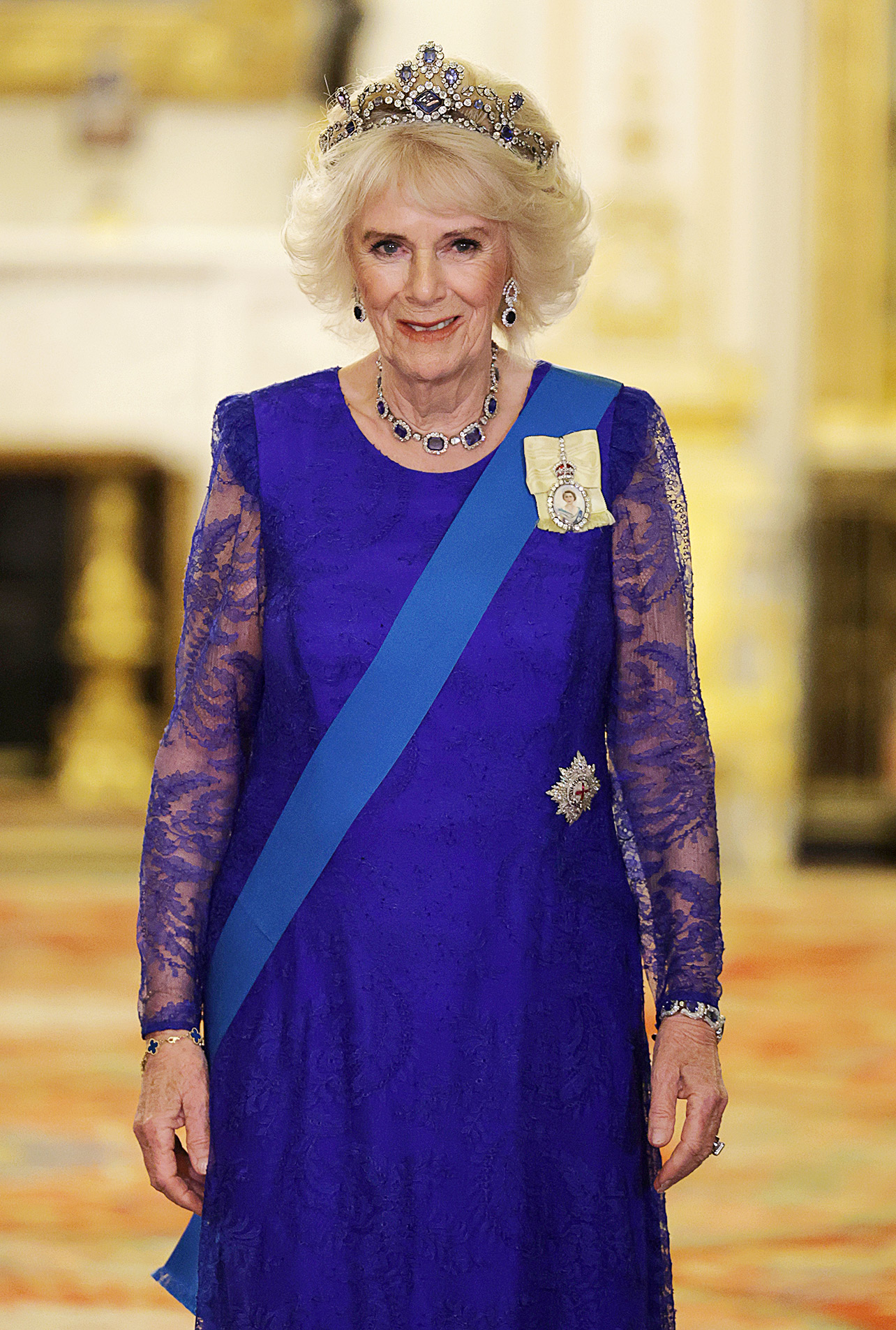 Queen Consort Camilla’s fashion-forward moment comes just days after she honored the late monarch, who died on September 8 at the age of 96, while speaking to guests during a royal reception.

The former Duchess of Cornwall welcomed a group of young writers who had entered the Queen’s Commonwealth Essay Competition to join her at Buckingham Palace.

“I cannot begin without paying tribute to my dear mother-in-law, Her late Majesty, who is much in our thoughts today and who is so greatly missed by us all,”  Camilla stated. “Throughout her remarkable reign, its vision to improve the lives and prospects of all Commonwealth citizens remained, as you know, very close to her heart.”

Camilla continued: “Over the past few months, my husband and I have drank immense comfort from the messages of condolence that we have received, and continue to receive, from the four corners of the world. They have reminded us that the written word has a unique ability to connect, to heal, to reassure and to offer hope even in the midst of grief.”

Charle’s wife praised Elizabeth’s “enduring love for the Commonwealth,” celebrating the more than 50 countries that make up “this wonderful, extraordinary, richly diverse association of independent and equal nations and friends.”

Before Elizabeth died on September 8 at the age of 96, she formally announced her plans for Camilla’s involvement in the monarchy while celebrating her Platinum Jubilee in February. At the time, an insider exclusively revealed how Camilla’s relationship with her mother-in-law had shifted since her 2005 wedding to Charles.

“Through her dedication and loyalty to The Firm, she has more than proved to her that she has what it takes,” the source told Us Weekly. “Camilla has definitely grown on Elizabeth II, more so than ever during the [coronavirus] pandemic. She really upped her game and willingly took a hands-on approach with additional duties.”

Earlier this month, however, royal expert Chris Anderson exclusively revealed to Us that Elizabeth’s endorsement of Camilla for the role of consort may have initially stemmed from a deal the King made with his mother following Prince Andrew’s scandal. After the late queen allegedly used money that was meant for her heir to help settle the Duke of York’s lawsuit, Anderson claimed that Charle’s realized it was the “perfect time” to endorse Camilla.

“And so in a kind of an unspoken implicit deal, this was the tradeoff,” the royal author told Us. “And that announcement was made … it was very abrupt, you may recall, it was something [that took] everybody by surprise, … she was so against Camilla ever becoming queen for decades and decades, that it, it was a complete about-face, [and] that I think [it] shocked a lot of people.”