Cancer survivor stages a topless protest as she accuses her surgeon of IGNORING her wishes for a flat chest after a mastectomy, leaving her with unwanted flaps of skin instead

A woman who underwent a double mastectomy says her surgeon ignored her request for a flat chest, leaving her with pockets of extra skin ‘in case she changed [her] mind’.

The scientist was certain she didn’t want to go through reconstructive surgery and wanted instead to be left with a completely flat chest — a request she says she communicated clearly to her doctor prior to the procedure. But Bowles, who staged a topless protest on Saturday to raise awareness about undesired mastectomy outcomes, was left with pouches of skin on her chest, which she finds ‘abhorrent’.

The mother of two was ready to say goodbye to her natural 36HH breasts after the surgery. Bowles, who enjoys running and swimming, often felt that her chest got in the way of her activities, and it attracted unwanted attention from others, frequently men.

‘Everything was harder with boobs that size,’ she told Cosmopolitan. ‘When I swam, I had to wear an expensive underwire bikini top under my racing suit — otherwise my breasts would fall out of the sides of my Speedo. You need industrial-strength scaffolding to hold up 10 pounds of boob.’

Prior to her mastectomy, Bowles was ‘ready to let [her] breasts go’ and felt ‘actually happy at the prospect of having them gone’.

Online, Bowles, a mother of two, heard about other women who had also wanted to go flat but were shocked to wake up from surgery with flaps of skin on their chests.

In order to prevent a similar outcome for herself, she said, she made sure to communicate her wishes to her surgeon clearly.

‘When I met with my surgeon, I told him that I had seen other women left with skin to facilitate reconstruction and that I couldn’t live like that,’ she told Cosmo. ‘I didn’t want to be reminded of what I’d lost. I told him I needed to be completely flat with no extra skin at all.’ Speaking out: The scientist (pictured during a topless protest) says her surgeon ignored her request for a flat chest, leaving her with pockets of extra skin ‘in case she changed [her] mind’

But Bowles told Yahoo Lifestyle she heard her surgeon say he would leave some additional skin on her chest just minutes the surgery.

‘Before they started the anesthetic drip, I heard [the doctor] say, “I’ll just leave a little extra in case you change your mind,”‘ she told the platform.

That wish, according to Bowles, was ignored, and she felt violated when she woke up and realized she hadn’t been given the flat chest she had expressly asked for.

‘It was paternalism at its finest,’ she said. ‘I felt like, I just experienced what amounted to a rape. I was physically assaulted. It wasn’t sexual. But I was kind of in shock.’

The scientist said she tried to confront her surgeon about the undesired pouches of skin during a later visit, but that he ‘denied it’ and told her: ‘It will tighten up.’ 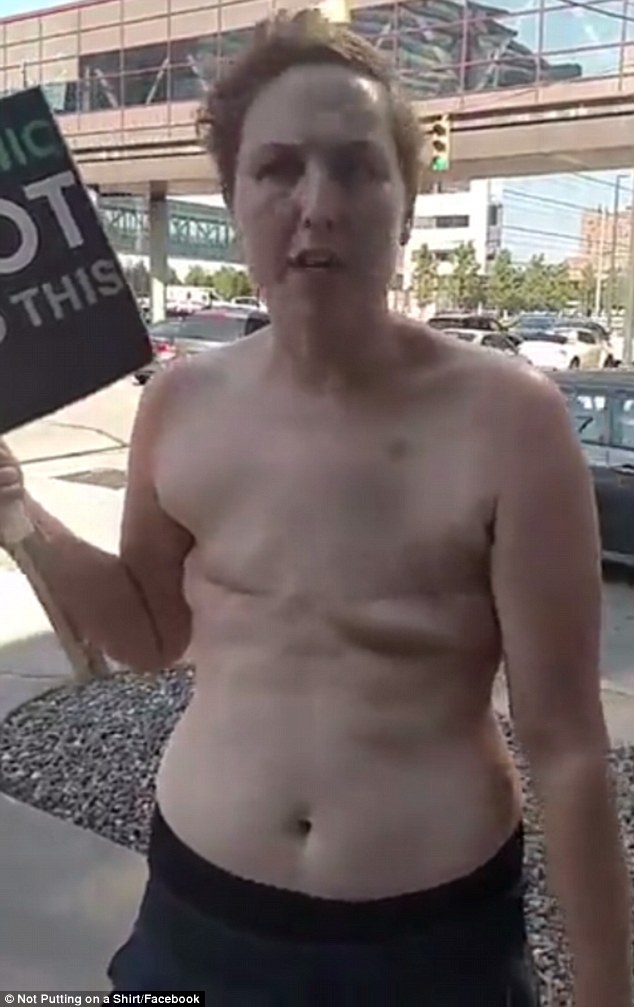 Conversation: The scientist said she tried to confront her surgeon about the undesired pouches of skin during a later visit, but that he ‘denied it’ and told her: ‘It will tighten up’

Bowles said she has tried to address the issue with the Cleveland Clinic, where she was treated, but has so far been unsuccessful. She told Yahoo Lifestyle that, after a previous topless protest in June, she met with the hospital’s CEO, but added that the meeting was fruitless.

On Saturday, she staged a topless protest outside of the facility, demanding more accountability on surgeons’ part.

The protest came as part of her movement Not Putting on a Shirt, which she started in order to advocate for satisfactory mastectomy outcomes and to make sure patients’ wishes are respected.

‘Kim had simply wanted to get back to life after just one surgery; now she has to choose whether to live with a cosmetic effect that she finds abhorrent, or to take on additional risk — and sacrifice energy, money, and precious time with her family — just to get a cosmetic result she feels she can live with,’ states the Facebook page for Not Putting On A Shirt. 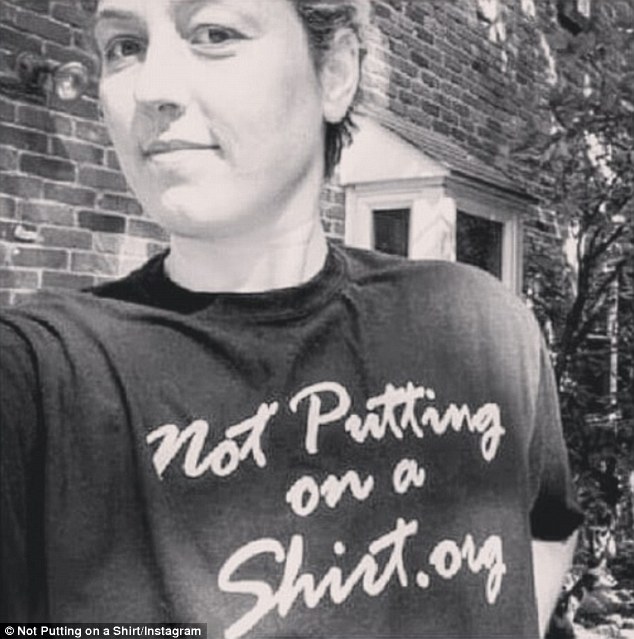 Coming forward: Kim has started a movement called Not Putting on a Shirt to advocate for satisfactory mastectomy outcomes and to make sure patients’ wishes are respected

The Cleveland Clinic told Yahoo Lifestyle in a statement: ‘Taking care of patients is our top priority. In this instance, Ms. Bowles chose to have a double mastectomy after having chemotherapy for her tumor. Per her wishes, she opted not to have further surgical revisions that are common for patients who have had mastectomies.

‘The physicians involved in her care have outstanding reputations and are highly skilled. We conducted three thorough reviews relating to her concerns and shared with her that it was determined every aspect of her care was done optimally to give her the safest amount of extra skin to prevent jeopardizing her arm movement.’

Breast surgeon Deanna Attai, an assistant clinical professor of surgery at the University of California, Los Angeles, told Cosmo, who received the same statement from the facility: ‘That’s bulls**t. Leaving the excess skin — it’s no easier to move the arms either way.’

Bowles told Yahoo Lifestyle she has heard from ‘dozens’ of women who also asked for flat chests and found upon waking up from their mastectomies that their requests had been ignored.

‘Everything about cancer is out of your control,’ Bowles told Cosmo.

‘The one thing I could control was what my chest looked like and to have someone casually snatch that away is insulting, demoralizing, and traumatizing. This can’t keep happening to women — it’s got to stop.’