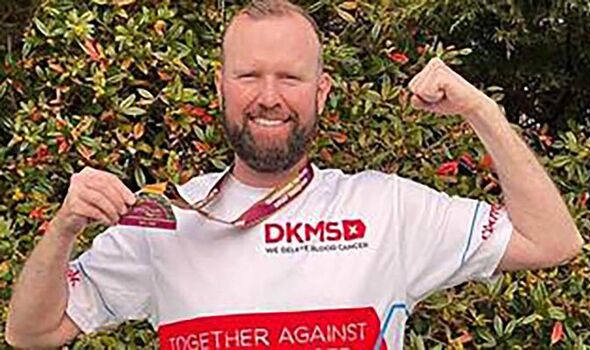 Falk Lonser, 28, from Germany, was the anonymous bone marrow donor who saved Colin’s life when he was battling leukaemia. Afterwards the two found each other and have become firm friends. Colin, 42, who lives in Glasgow with wife Hayley, said: “I feel privileged to have met Falk and its incredible we now have the friendship together. “I’ve been saved by him and I’ve gained a great friend.

“To run the Berlin marathon with him will be an honour.

“We’re intending to cross the finishing line hand in hand.”

Truck driver Colin fell ill in September 2014 while out running. He said: “I came back from my run and didn’t feel well. I started a new job the following morning and during the day I developed a pain in my chest that got worse as the day went on. I was worried I was having a heart attack so I called the NHS.”

After a week of tests doctors broke the devastating news that Colin had leukaemia.

“It was such a shock. I’d always led such a healthy life and now I was being told that I had cancer. I was speechless.

“ The first thing I could think of was I wasn’t going to live.”

He was transferred to the Southern General Hospital and began chemotherapy five days later. After five months of treatment – losing five stone in weight – he was told the cancer had gone into remission.

He said: “When the doctor told me it had gone I was elated. I thought I’d beaten it and could get on with my life.”

But in October that year he discovered a lump in his groin, again when he was out running. Tests showed the cancer had come back.

This time his only chance was a bone marrow transplant, as well as five more months of intensive chemotherapy.

Doctors scoured the global stem cell donor register and in January 2016 Colin got the news he had been waiting for – a donor had been found in Germany. The transplant was a success and Colin dreamed of thanking the stranger who had saved his life.

He said: “I wanted to thank him – he gave me my life back.