No regrets. Despite becoming the first houseguest evicted on Celebrity Big Brother Friday, February 4, Teddi Mellencamp is happy with how she fought to stay in the game.

Head of Household Miesha Tate originally nominated Olympic figure skater Mirai Nagasu and Queer Eye alum Carson Kressley, the latter as a pawn. But when he won the Veto competition, Miesha put Teddi up as the replacement nominee next to Mirai.

“I would have fought so hard to stay in, had I been given the opportunity,” Teddi exclusively tells Us Weekly about being backdoored. “I mean, I personally would have given somebody a fair fight. … It is super frustrating and I trusted Miesha.” 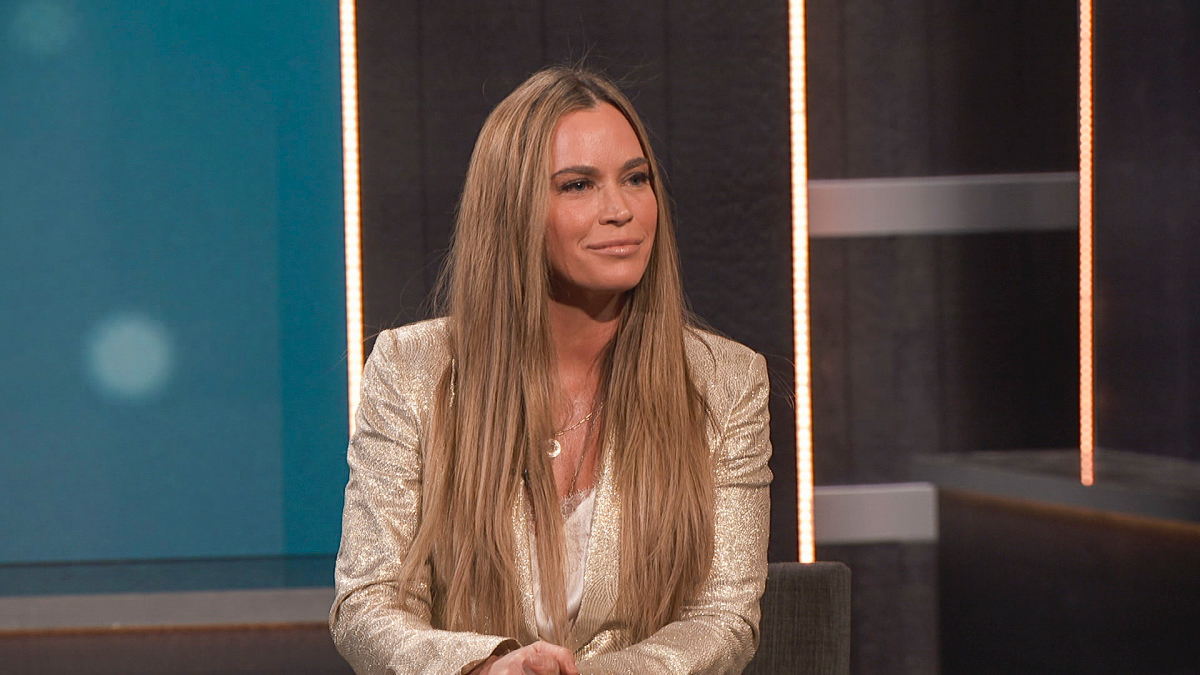 While Teddi thinks she would have went home either way, she ended up sitting next to Todd on eviction night as a twist saved Mirai from the block.

“I think I’m a bigger threat than Todd,” she tells Us. “I think they knew that physically and mentally, I had a better social game, and ultimately, you know, in the athletics department. I showed my cards right at the beginning. I couldn’t help myself.”

‘Big Brother’ Showmances Through the Years: Where Are They Now?

Teddi was in a majority alliance of six called “Formation” with Carson, Mirai, Todrick Hall, Cynthia Bailey and Shanna Moakler, but it quickly fell apart after some tension with Todrick.

“I didn’t realize, but I guess our relationship was never actually real because from the very get-go, even when we formed our alliance, he had already been telling people in my alliance that he didn’t want me in there,” the reality star says. “So, I guess whatever relationship I thought we had was false to him.” 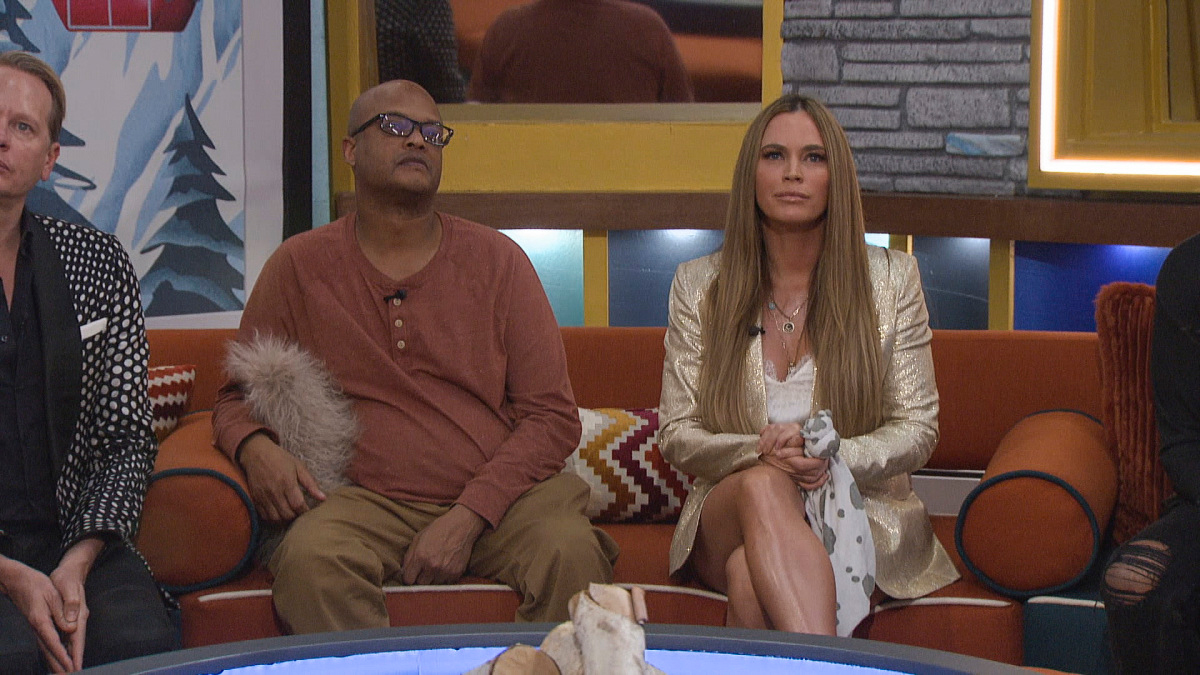 Teddi adds that the singer and dancer pulled “on people’s heartstrings” about needing the cash prize while also saying that he talked about possibly buying a $250,000 Wizard of Oz costume. “You’re financially all right if you have a movie theater in your house and you’re buying $250,000 costumes,” she tells Us.

So was there anything Teddi could have done to stay? Watch our exclusive interview with Teddi Mellencamp above or scroll down to read the full transcript. She also tells us about her argument with Todd and how she had Chris Kirkpatrick’s back. 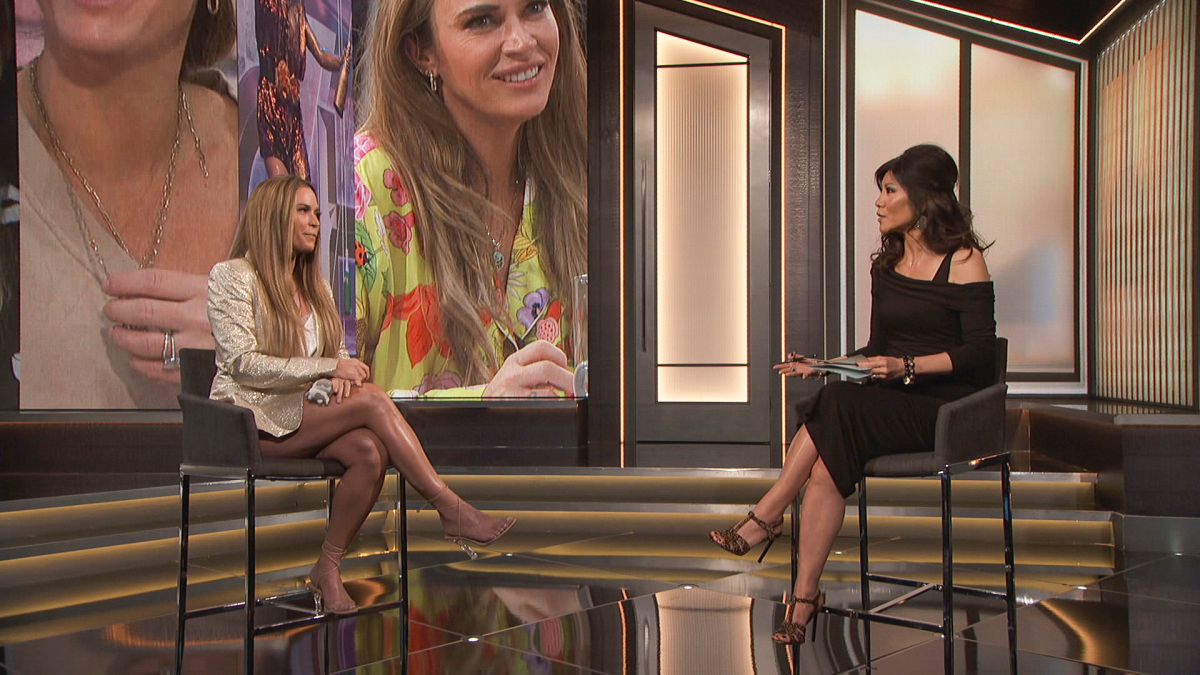 Us Weekly: How are you feeling this morning?

Teddi Mellencamp: Honestly, getting back into the real world does not seem real, like, I have 1562 text messages. I haven’t processed anything yet. My husband and my son watched it like they were watching a Rams game, so they’re giving me a debrief. But I’m still completely lost.

Us: You got backdoored and didn’t even get a chance to play in the Veto. Does that make it harder to accept that you’re first out?

TM: I mean, of course. Because I would have fought so hard to stay in, had I been given the opportunity. I mean, I personally would have given somebody a fair fight. So to be backdoored, it is super frustrating and I trusted Miesha. But it is what it is. I’m happy to be back with my family.

Us: You did seem to really fight to stay. We saw you campaigning. Why do you think they ultimately voted you out over Todd?

TM: Because I think I’m a bigger threat than Todd. I think they knew that physically and mentally, I had a better social game, and ultimately, you know, in the athletics department. I showed my cards right at the beginning. I couldn’t help myself.

Us: You did great in that competition.

TM: And I’m so frustrated because I could have held on longer. But I was like, “Oh, I don’t know how quickly I’ll have my next competition, and I don’t want to, like, hurt myself up here.” But had I known I was going to have so much time between competitions, I would have held on. 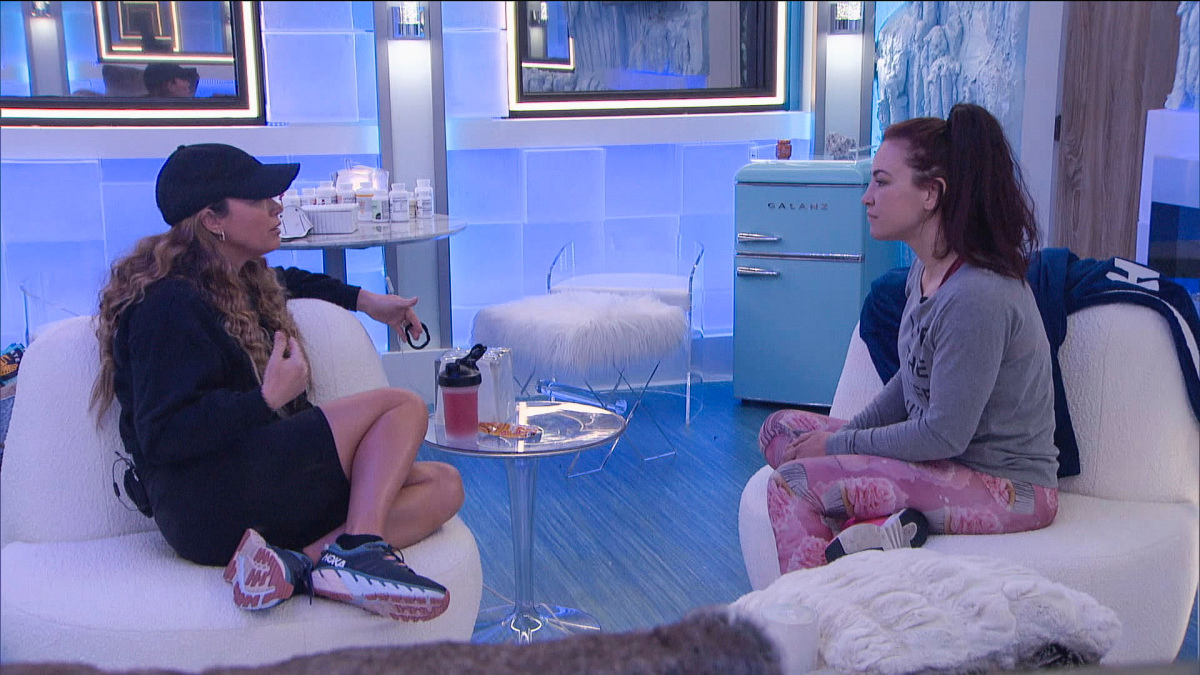 Us: What did you think when Miesha didn’t want to make that deal with you, but then had just given Todrick a deal?

TM: I knew at that moment that I was a target.

Us: Let’s talk about the vote. Whose vote surprised you the most?

TM: I would say that I was most surprised by Mirai because I really went to bat for Mirai multiple times in the house. I don’t know how much was shown. She gave me a look when we were sitting there, like, “You’re going to be OK.” And so that was kind of shocking to me, but I know that she would do anything to win. So I guess it’s not that shocking.

Us: She is an Olympian…

TM: Makes sense. Yeah. I mean, I was, like, there’s only so much we can pretend that she can’t handle the pressure. She’s been to the Olympics more than one time.

Us: I know you told Julie [Chen] that you felt most betrayed by Todrick in that moment. Can you talk a little bit about your relationship with him? When did that fall apart?

TM: I didn’t realize, but I guess our relationship was never actually real because from the very get-go, even when we formed our alliance, he had already been telling people and my alliance that he didn’t want me in there. So, I guess whatever relationship I thought we had was false to him. But, I kind of knew because he was pulling on people’s heartstrings, like he was [saying], “I’m having to fund my own tour” and all these things and like, “This is such a big thing for me. I need to win financially.” And that’s where you really get people because some of us are just playing the game. But then he, towards the end, he would say things like, “Oh yeah, I was considering buying a $250,000 Wizard of Oz costume, and you’re like, “What? Something’s not tracking here.” Like, you’re financially all right if you have a movie theater in your house and you’re buying $250,000 costumes. 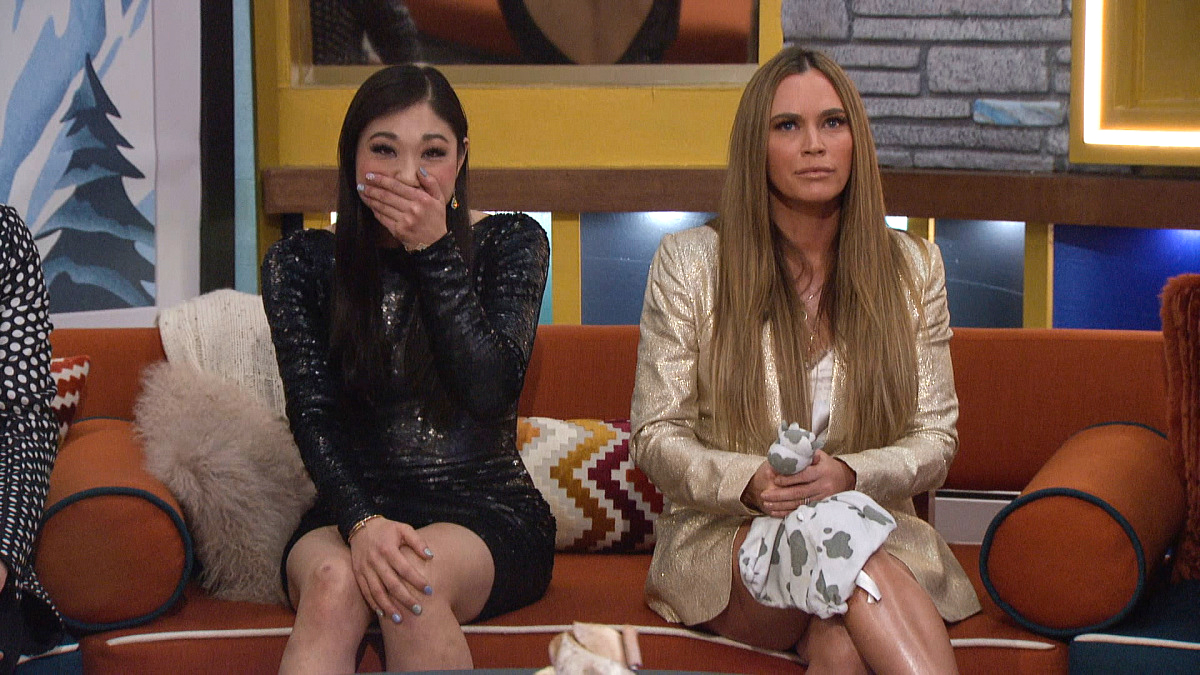 Us: We did we did hear a little bit about some tension with some other houseguests. Did you have arguments with anyone else in the house that we didn’t get to see?

TM: I had an argument, like an actual argument with Todd. We didn’t see that, but he just kind of threw around some words that weren’t great, and I was like, “My kids are going to see this and I need you to stop saying this before we go live.” And so we had a moment. Had I known I wasn’t safe, I probably would have just let it roll off my shoulders. But I thought I was safe in the moment and doing the best thing for the house because he was kind of saying it to everybody, so I made a big mistake there.

Us: How was your relationship with Chris Kirkpatrick?

Us: Yeah, he was a little starstruck.

TM: I was like, “Listen, I’m not going to be kissing the ring here.”

Us: How do you think you would have fared against Mirai in the vote?

Us: Who will you still talk to after the game? Who do you want to be friends with?

TM: Cynthia and Carson, and even though Shanna ultimately went against me, I’ll still talk to her because I know she’s playing the game hard because her family and her life. And, you know, she’s been wronged a lot of times, and I ultimately have empathy for her. And I think Lamar [Odom] is freaking hilarious.

Us: Shanna did cry when you left. She was pretty upset that she had to vote you out.

TM: I know she did what she had to do. She knew that I wasn’t going to be able to stay. Oh, you know what? And Chris Kattan was a good guy too. 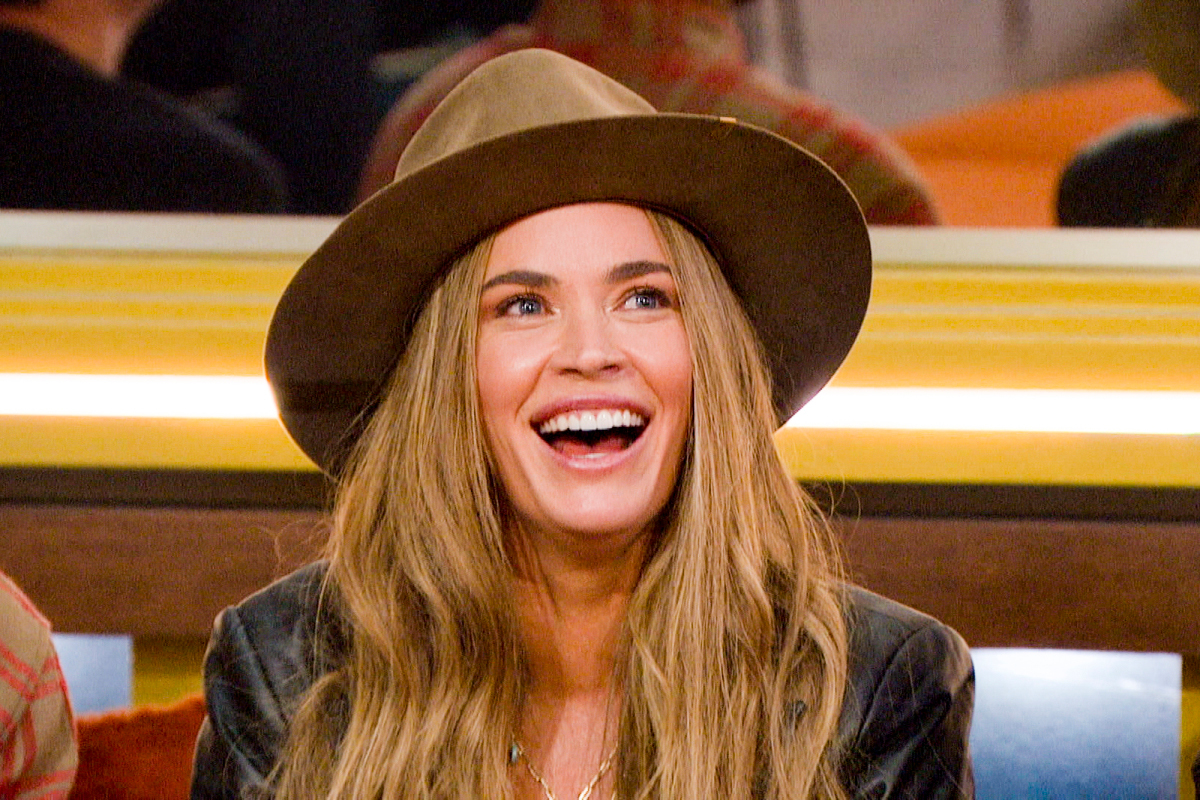 Us: Your dad [John Mellencamp] posted a really funny Instagram that made some headlines. He was like, “I don’t know what show Teddi’s on, but it premieres tonight!” What did you tell him about what you were doing?

TM: Well, not much. I just told him that we couldn’t talk for potentially one month. And so I tried to explain it to him, but he is one of the only people other than my family that live in my house with me that I’ve spoken to. He called last night. He just said, “I’m so proud of you, honey. Me and your brothers watched and you played with integrity, and that’s all I could ever ask for from my daughter.” And it made me emotional because that’s that was my one goal. Like, I needed to play a fair game.

Us: You really did come to play. As a fan of the show, it was really nice to see that because sometimes celebrities go in there and they’re like, “Whatever, I don’t care if I leave.”

TM: And I don’t know if you saw this, but did you guys see Miesha and Chris Kirkpatrick try to get me to turn on Carson? And I wouldn’t. So I’m scared he’s the next to go.

Us: Are you rooting for Carson and Cynthia to win?

TM: Yeah, and Shanna. Even though she turned on me, I’m rooting for my entire “Quatro” alliance. That was our name.

Us: Speaking of alliances, it seemed like a bunch of them didn’t hold. What did you think about “Formation”? Did you think that was going to last?

TM: Well, I was warned prior to going into the house not to trust Todrick by someone that personally knows him. But, he was so lovely to me at first that I fell for it, but I never approached them for an alliance. They came to me. So, I think that’s why I believed it. However, I knew that you can’t keep an alliance of six for that long.

Us: Did you have any hesitation about doing the show?

TM: I love a challenge. I love to compete. So, the only hesitation was to leave my family. But otherwise, it was nice to not have my phone. I was able to have a break from social media, like, all that kind of stuff was a positive. But the paranoia game is high in that house. It’s unbelievable.

Us: Do you have any regrets? Anything you think you could have done to stay in the game?

TM: I guess my only regret … No, actually, I don’t. I played a fair fight. I was loyal to the people I said I’d be loyal to, and any time I change my mind, I was straight-forward to it. Ultimately, I guess I could have played less hard in the first competition, but I wanted to be able to show my kids, like, you want to win, you got to try hard.