A large chemical fire has broken out over Lake Charles, Louisiana, hours after the eye of Hurricane Laura passed directly over the city. Louisiana State Police say they’re responding to a chlorine leak at a company that makes chemicals along Interstate 10 just west of Lake Charles, La., which was hard-hit when the storm slammed into the Gulf Coast early Thursday.

Louisiana Governor John Bel Edwards said the fire was burning Thursday morning just outside the city and advised storm survivors to shelter in place. He tweeted to residents in the area: “Shelter in place, close your windows and doors and TURN OFF YOUR AIR CONDITIONING UNITS.”

Police say the chlorine leak is at the BioLab chemical manufacturing facility in Westlake. Authorities say they’re working with plant managers to try and contain the leak.

Images of the fire showed a massive stream of smoke billowing over Lake Charles on Thursday morning. 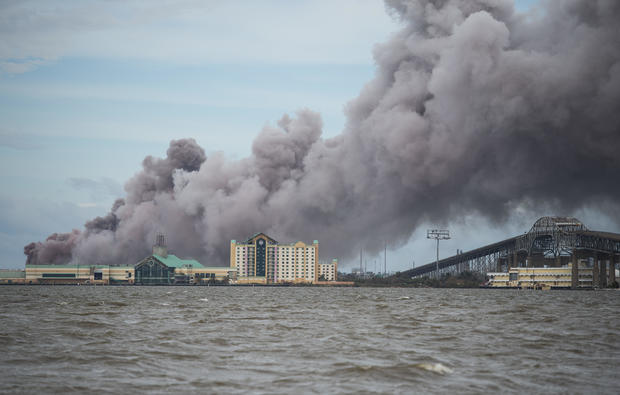 The city of Sulphur said in a Facebook post it was “issuing a shelter in place until further notice” because of the dangerous cloud created by the chemicals.

BioLab’s Lake Charles plant was built in 1979 and manufactures trichloroisocyanuric acid, chlorinating granules and other chemicals used in such household cleaners as Comet bleach scrub and pool chlorine powder.

Both trichloroisocyanuric acid and chlorine are potentially acutely toxic to people and animals if ingested or inhaled. Chlorine gas, which can appear in the air as a greenish yellow cloud, was used as a chemical weapon in World War 1. It is a potent irritant to the eyes, throat and lungs.

At least three deaths in the state have been blamed on Laura. The storm brought “catastrophic storm surge, extreme winds and flash flooding” to portions of the state, the National Hurricane Center said.

The storm had intensified rapidly into a Category 4 hurricane before slamming into the Gulf Coast near the Louisiana-Texas border. The storm is now moving north, bringing damaging winds and flooding rainfall to central and northern Louisiana, according to forecasters.