Cicely Tyson, the stage, screen and television actress whose vivid portrayals of strong African American women shattered racial stereotypes in the dramatic arts of the 1970s, propelling her to stardom and fame as an exemplar for civil rights, has died. She was 96.

Her death was announced by her longtime manager, Larry Thompson. 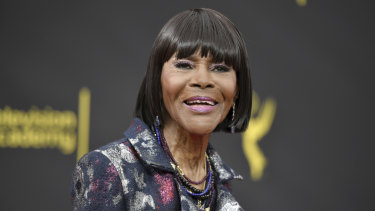 In a remarkable career of seven decades, Tyson broke ground for serious black actors by refusing to take parts that demeaned black people. She urged black colleagues to do the same and often went without work.

She won three Emmys and many awards from civil rights and women’s groups, and at 88 became the oldest person to win a Tony, for her 2013 Broadway role in a revival of Horton Foote’s The Trip to Bountiful. 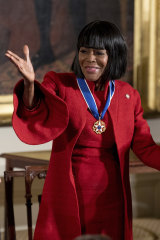 Tyson blowing a kiss after receiving the Presidential Medal of Freedom from then-President Barack Obama during a ceremony at the White House in 2016. Credit:AP

In the 1960s, there were few substantial roles for talented, relatively unknown black actresses like Tyson.

But in 1972, in a film called Sounder, she found what she was looking for: a leading role with dignity. It was as Rebecca, the wife of a Louisiana sharecropper (Paul Winfield) who is imprisoned in 1933 for stealing food for his children. She rises to the challenge – cleaning houses, tilling fields, sweltering under the sun in a worn dress and braided cornrows – a black woman whose excruciating beauty lies in toil and poverty.

“The story in Sounder is a part of our history, a testimony to the strength of humankind,” Tyson told The New York Times after receiving rave reviews and an Oscar nomination for best actress. “Our whole black heritage is that of struggle, pride and dignity.”

In 1974, Tyson stunned television audiences with her Emmy Award-winning portrayal of a former slave in The Autobiography of Miss Jane Pittman, adapted from the novel by Ernest J. Gaines.

She was a vegetarian, a teetotaler, a meditator and, from 1981 to 1989, wife of jazz trumpeter and composer Miles Davis.

Tyson eventually appeared in 29 films; at least 68 television series, miniseries and single episodes; and 15 productions on and off-Broadway.

After a three-decade absence from Broadway, Tyson returned in 2013 in a production of The Trip to Bountiful, playing Carrie Watts, an old woman, conceived as a white character, who yearns to see her hometown before dying. Her performance won the Tony, Drama Desk and Outer Critics Circle awards.

In January 2021, when she was 96, her memoir, Just as I Am, appeared, and in a prepublication interview with The New York Times Magazine, she was asked if she had any advice for the young.

“It’s simple,” she said. “I try always to be true to myself. I learned from my mum: ‘Don’t lie ever, no matter how bad it is. Don’t lie to me ever, OK? You will be happier that you told the truth.’ That has stayed with me, and it will stay with me for as long as I’m lucky enough to be here.“