The reviews for Citizen Kane were universally glowing: the 1941 classic was “a triumph”, “a power play of startling brilliance” and “one of the most arresting pictures ever produced”, critics raved in write-ups compiled by review-aggregator Rotten Tomatoes.

Enter Mae Tinee of the Chicago Tribune: “You’ve heard a lot about this picture and I see by the ads that some experts think it ‘the greatest movie ever made’,” began the pseudonymous critic. “I don’t.”

The nearly 80-year-old review, recently unearthed by Rotten Tomatoes and added to the Citizen Kane tally, ruined the celebrated film’s perfect score on the site. In a development met with glee on Twitter, that meant Paddington 2 – a live-action animated comedy about a marmalade-loving bear – suddenly carried a higher rating. 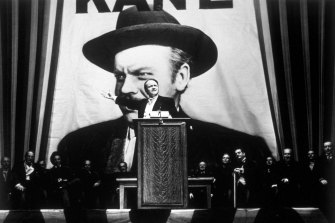 Orson Welles in the lead role in his 1941 film Citizen Kane.Credit:Hulton Archive/Getty Images

Uploaded as a scanned clipping from the May 7, 1941, edition of what was then known as the Chicago Daily Tribune, the critique was headlined “Citizen Kane Fails to Impress Critic as Greatest Ever Filmed.” The piece that would knock down the cinematic legend was attributed only to “Mae Tinee” (Matinee, get it?).

In what the Tribune’s current film critic described as evidence that “some journalistic traditions are dumber than others,” critics wrote reviews under the pseudonym between 1915 and 1966. Thus, the writer’s true identity is unknown.

He or she offered praise for some of the performances in Citizen Kane, which would go on to be nominated for nine Academy Awards. Otherwise, the mystery critic was largely unimpressed.

“It’s interesting,” the review said. “It’s different. In fact, it’s bizarre enough to become a museum piece. But its sacrifice of simplicity to eccentricity robs it of distinction and general entertainment value.”

Elsewhere in the review, Tinee criticized the movie’s lauded photography as “shadowy and spooky,” adding, “I only know that it gives one the creeps and that I kept wishing they’d let a little sunshine in.”

“Citizen Kane,” added the critic, was “an almost clinical dissection of a complete egotist” and “a study of magnificent futility.”

Paddington 2 has not one negative review listed on Rotten Tomatoes. Its page is full of praise. One particularly effusive critic described it as “a guiding light in the dark to help place a worldwide blanket of comfort over us all.”

The movie’s co-writer and director, Paul King, joked to The Hollywood Reporter that he would try not to let it get to his head that he had apparently triumphed over the acclaimed Citizen Kane.

“It’s extremely lovely to be on any list which includes Citizen Kane, but it is obviously quite an eccentric list that goes from Citizen Kane to Paddington 2, so I’ll try not to take it too seriously,” he said. “I won’t let it go too much to my head and immediately build my ‘Xanadu.’ But I have been cooking up a model just in case.”

Find out the next TV shows, streaming series and movies to add to your must-sees. Sign up to get it every Thursday.