Cloris Leachman, who won an Academy Award for her portrayal of a neglected housewife in the stark drama The Last Picture Show but who was probably best known for getting laughs, notably in three Mel Brooks movies and on television comedies like The Mary Tyler Moore Show and Malcolm in the Middle, died Wednesday at her home in Encinitas, California. She was 94.

The death was confirmed by her son Morgan Englund, who did not give a cause. 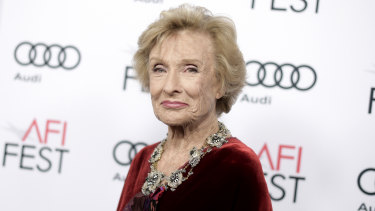 Leachman entered the spotlight as a Miss America contestant in 1946 and was still in the public eye more than 74 years later, portraying offbeat grandmothers on television and film and competing with celebrities less than half her age on the US version of Dancing With the Stars. In between, she won admiring reviews for her stage, film and television work, as well as Emmy Awards for performances in both dramas and comedies.

Her movie career began in 1955 when she played a doomed hitchhiker in Kiss Me Deadly, a hard-boiled detective film based on a novel by Mickey Spillane. She was already a seasoned stage and television actress by then, and throughout the rest of the 1950s and the ’60s she appeared in big roles on the small screen — she preceded June Lockhart as the mother in the 1957-58 season of Lassie — and small roles on the big screen, including as a prostitute in Butch Cassidy and the Sundance Kid (1969).

But she did not become a star until Peter Bogdanovich cast her in The Last Picture Show, his 1971 adaptation of Larry McMurtry’s novel about life in a small Texas town in the early 1950s. Her nakedly emotional portrait of a lonely middle-aged woman who has a brief affair with a high school football player won her the Oscar for best supporting actress. 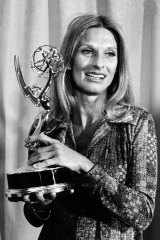 Leachman with one of the eight Emmy awards she picked up in her career. Credit:AP

“I’m at a point where I’m free to go out and have a little fun with my career,” she said after winning. “Some Oscar winners have dropped out of sight as if they were standing on a trapdoor. Others picked it up and ran with it. I’m going to run with it.“

She did, and more awards and acclaim quickly followed. She never received another Oscar nomination, but between 1972 and 2011 she was nominated for 22 Primetime Emmys and won eight.

She was nominated four times and won twice for her performance on the hit sitcom The Mary Tyler Moore Show as Phyllis Lindstrom, the scatterbrained landlady of Mary Richards, the plucky TV news producer played by Moore. She went on to play the same role from 1975-77 on the spinoff series Phyllis, for which she received another Emmy nomination and won a Golden Globe.

Although her focus for the rest of her career was on television, she also had some memorable movie roles, notably under Mel Brooks’ direction. In his beloved horror spoof Young Frankenstein (1974) she was the sinister Transylvanian housekeeper Frau Blücher, the very mention of whose name was enough to terrify any horse within earshot.

Leachman’s marriage to producer George Englund ended in divorce in 1979 after 26 years. Englund died in 2017. Their son Bryan died in 1986.

In addition to Morgan Englund, she is survived by two other sons, Adam and George Englund; a daughter, Dinah Englund; and seven grandchildren.

Leachman remained in show business almost to the end of her life. (“They are going to have to take a lead pipe and beat me over the head with it to get me to stop,” she told an interviewer in 2011.) In 2008, she finished seventh out of 13 contestants on Dancing With the Stars. At 82, she was the oldest contestant to take part in that competition.