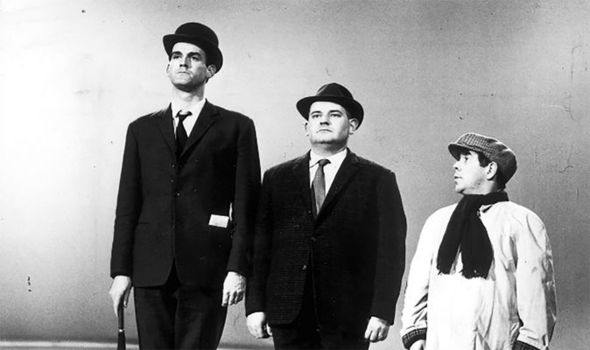 It’s not easy, being posh. All those grand houses to maintain, staff to run, correct dinner settings to supervise, tiaras to polish – these (well, some of them), are all the subject of a highly entertaining new documentary, Keeping Up With The Aristocrats, currently airing on ITV. In actual fact, the toffs in question no longer have the resources to run their stately homes as their forebears did and have to resort to all sorts of money-making schemes.

These include opening houses up to the public, pop-up restaurants (although in this case it involves Michelin-starred chef Jean-Christophe Novelli and costs £165 a head), bone fide princesses slumming it as tour guides and much more. So what really is posh these days?

And it’s not just the upper classes who care who’s above or below the salt – it’s the rest of us too.

Because, as an Englishman’s home is his castle, we Brits have always been obsessed with keeping up with the neighbours and that means, frankly, a morbid dread of coming across as ways d nd means being common. We all loved Keeping Up Appearances, not just because of Hyacinth Bucket – “It’s pronounced ‘Bouquet’,” as Hyacinth, played by the wonderful Patricia Routledge, used to remind us. It was also because it chimed with vast swathes of the country. If we weren’t crashing social snobs ourselves, we almost certainly lived next to someone who was.

It was an attitude summed up in the famous 1966 TV Frost Report sketch featuring John Cleese, Ronnie Barker and Ronnie Corbett which illustrated the old class system perfectly.

Because what it means to be common depends on your background. For most of us, going to a smart restaurant is a great treat, but if you come from a stately home with its own cook, it can be considered beyond the pale (one of the reasons the Queen so rarely goes to restaurants is because she doesn’t have to).

And food can be an absolute minefield of social faux pas. Tinned fruit, once a staple of the dessert trolley, is thought terribly common these days, as, to be fair, is the dessert trolley itself. For many of us, one of the great joys of going to Italy, a posh destination if ever there was one, is the fact that the food is so good you can yank a tomato out of the ground, put a bit of olive oil on it and have a feast fit for a Roman emperor.

However, back in the post-war years, some aristos who could afford to be fussy, considered them too common to have in the house – possibly because tomatoes, aka the “poor man’s apple” were for centuries thought to be poisonous. But food can be upwardly mobile too? oysters used to be street food for the working classes in the 19th century and now they are at the very top of the culinary hierarchy.

When my generation was growing up, it was considered beyond the pale to eat on the street. Mothers would shake their heads in disgust and mutter “common as muck” at the sight of other people’s families tucking into bags of chips in public. And it is still pretty disgusting to see people wolfing down burgers and kebabs, with ketchup and grease dripping everywhere and not a linen napkin (never a paper serviette!) in sight.

But what about a trendy foodie market? Now that’s a very different kettle of bouillabaisse, isn’t it? No self-respecting professional is going to turn their nose up at a plateful of oozing raclette, a trendy taco or some expertly spiced falafels.

If the foodstuff involves the word “artisan”, or is advertised as organic and locally sourced from a small family-run business, created with an environmentally-aware agenda, you’re probably on safe ground. It also helps if it costs a fortune: money may not be able to buy you happiness, but it doesn’t half help when it comes to buying you class.

But even the seemingly most straightforward foods can be smeared with class innuendo, so nuanced that it’s impossible for any non-natives of this sceptre’d isle to decipher – and pretty difficult even for those born and brought up here to grasp. Salad cream, bad: mayonnaise, good, especially if it didn’t come out of a jar. Home-made puddings, good; shopbought puddings, bad – unless they come from a very expensive French patisserie.

Fish fingers? Bad if served with oven chips to children, good if homemade and served by a gastro pub in a sourdough sandwich with a side order of irony. And, on the subject of chips, here’s another hot potato? are tattoos common? A generation ago, inking was only deemed acceptable on former members of the armed forces, and then limited to a discreet design on the upper arm only revealed on the beach or in the bedroom.

Now the world and his wife, especially his wife, have one, not least the fragrant and very posh Samantha Cameron, who has a dolphin on her ankle.

When Dame Judi Dench reveals that she has one you know the days of the “tramp stamp” are over. Although I do wonder what the likes of David Beckham will do when all that too, too solid flesh melts into a dew.

And what about pierced ears? Well, that depends on how old you are. Girls of my generation tended to have them done when we were about 18; the sight of small children with earrings drew sharp intakes of breath and a feeling of smug superiority among our mothers.These days, it’s not considered remotely common to start senior school with a small pair of ear studs.

What is happening where you live? Find out by adding your postcode or visit InYourArea

But probably the biggest clue of all as to where you sat on the posh/common spectrum was always your accent. Ambitious mothers of the post-war years were constantly picking up dropped aitches and encouraging children to say “pardon”, not “what” – totally failing to understand that the upper classes thought the former to be embarrassingly lower-middle-class.

Until fairly recently it was common to send your children to elocution lessons, on the very reasonable grounds that if they were “well spoken”, they were more likely to get a good job. Anything other than RP (received pronunciation) was thought common.

Now it’s the norm to play down your privileged background rather than big it up. Take Tony Blair. He came from a public school and Oxford background but mangled his accent, dropping his tees right, left and centre and employing the glottal stop.

His accent was clearly as malleable as his socialist principles; the world he moves in now, with its private jets, oligarchs and dubious fortune, may be rich, but it certainly isn’t posh.

Some old rules seem to have survived: It’s common to put a milk bottle on the dining table (use a jug), it’s common to eat peas – or anything else – from a knife. Hot tubs are common and so is top-to-toe designer gear (unless it’s seriously high end) and if you’re in any doubt about the matter, turn to the (very posh) interior designer Nicky Haslam to find out.

He is so certain of his ground in this ever-shifting social quagmire he compiled lists of what he considered common and put them on tea towels. They include baby showers, swimming with dolphins, coloured Wellingtons, punctuality, celebrity ambassadors and gilded country gates.

Incidentally, I met Nicky Haslam at a party some years ago: “Have you met Virginia?” asked our mutual acquaintance. We hadn’t but Nicky replied, “Of course.”

Since Nicky has met everyone he couldn’t possibly be expected to remember if we’d really been introduced, but was so polite he didn’t risk saying, “No,” in case we had.

He had utterly impeccable manners. Now that IS posh.