Thomas has taken a scene from the movie adaption of Carrie Fisher's memoir Postcards from the Edge, starring Merryl Streep, and turned it into a photo opportunity for visitors of The National 2019, a showcase of Australian contemporary art opening this week across three of Sydney's premier art spaces. 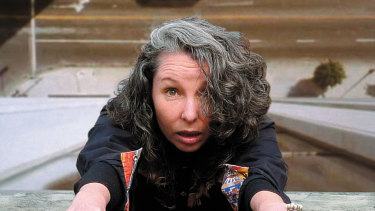 Nat Thomas dangling from the ledge in a recreation of a scene from the film Postcards from the Edge. Credit:Nat Thomas

For her installation at Carriageworks, Thomas has placed a platform in front of a scene from the film depicting a vertiginous drop from a skyscraper, allowing visitors to snap themselves mimicking Streep as she dangled on a ledge.

The work is a critique of the blockbuster exhibition, an exploration of mass media and the way we see ourselves, as well as an ode to Fisher "who hit a particular crossroads in her career, and she wrote her way out of it, and I did the same".

Thomas is one of 70 artists featured in the second edition of The National 2019: New Australian Art, a six-year biennial initiative in which the works of artists are shown in three distinct exhibitions at Carriageworks, the Museum of Contemporary Art and the Art Gallery of NSW.

Sixty per cent of selected artists are women (43 female to 27 male) and many artists are not represented by a commercial gallery, a reflection of the determination of the exhibition curators to look beyond the cities and established galleries to find exciting new works. 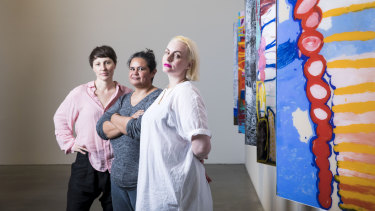 MCA's curators Anna Davis and Clothilde Bullen have worked with artists from went to regional
and remote communities as far afield as the Kimberley, the Torres Strait and South Australia's
the Aṉangu Pitjantjatjara Yankunytjatjara Lands.

"We travelled widely, we looked widely," Davis said. "We always were at least trying for balance. It turned out there was a lot of women doing really great work so there is strong female representation in the show."

Among the works exhibited at the MCA are the delicate clay and porcelain ceramics of Janet Fieldhouse, Julia Robinson's fabric sculptural fascinations and Kaylene Whiskey's vibrant frames peopled with her music heroes Dolly Parton, Michael Jackson, and Cher.

At first, Davis had "one of those panic moments" where she worried how she could bring the exhibition together but Bullen told her: "You know this country is not one thing, it's all these different cultures, people speaking all these different languages."

At the Art Gallery of NSW, curator Isobel Parker Philip has brought together a suite of 20 art projects which grapple with notions of change and uncertainty. The National shouldn't be viewed as the "greatest hits" of Australian contemporary art, Parker Philip said. It had been shaped for "dialogue, and the relationships you can draw between things … so the viewer can follow the show almost like a thread".

Heart in her mouth, Izabela Pluta dived to an oddly formed offshore reef in Japan to create Apparent Distance, a journey to that place where the "blue bleeds out in the ocean", while Mira Gojak's sculptures are wound with blue yarn linking earth and the further reach of the stratosphere.

Carriageworks' Daniel Mudie Cunningham drew on the research and knowledge of up-and-coming artists from his previous role at Artbank for a playful exhibition that samples contemporary practice heavily influenced by pop culture.

Melanie Jame Wolf's four-channel video installation takes the three most repeated words in pop music – 'oh', 'yeah' and 'tonight' – and turns into a commentary on the different tropes of the MTV era she grew up in.

"The whole work is about how pop poetics imprints in our cultural psyche in the way it shapes identity and it's very much the licence that music video gave me to rehearse versions of myself," she said.

The commercial gallery sector had changed so much and artists were finding new ways to support themselves, Cunningham said. "It's the responsibility of good intelligent curators to be looking for artists that are interesting, not just going to your one-stop shop in your Paddington gallery scene."