Ex-rugby player gunning for the Mr Universe crown reveals what it REALLY takes to maintain his jaw-dropping new physique – including consuming 5,500 calories a day

A former rugby player who has transformed his body after injuries forced him out of the game has revealed exactly how he got the sculpted physique that has seen him attempting to win the Mr Universe title.

Musclebound personal trainer Max O’Connor, 30, from Stratford-Upon-Avon, whose brother is reality TV star Rogan O’Connor, gave up the sport he’d been playing since he was four following a series of injuries that culminated in a ruptured ligament and multiple surgeries.

After turning his attention to strength training in the gym to recover fully from eight operations in four years, he developed a passion for bodybuilding and has seen his weight soar from 14 stones 1lb to 18 stone 5lbs. His chest size has increased from 48-inches to a whopping 52-inches. 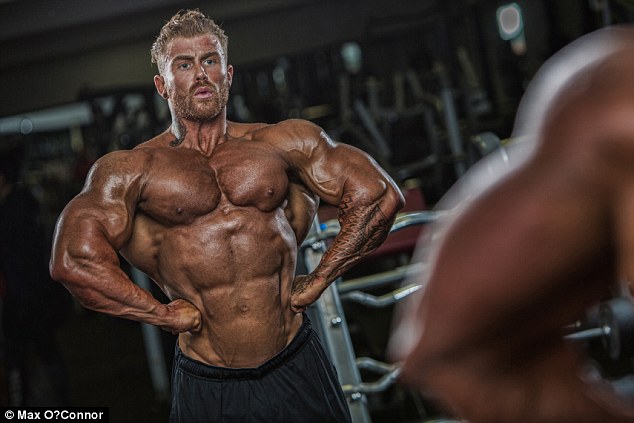 Max O’Connor, 30, (pictured) from Stratford-Upon-Avon, has spent the last ten years transforming his body with the aim of winning the international Mr Universe competition; after coming runner-up twice in 2017 and 2012, he’s hopeful of lifting the crown next month 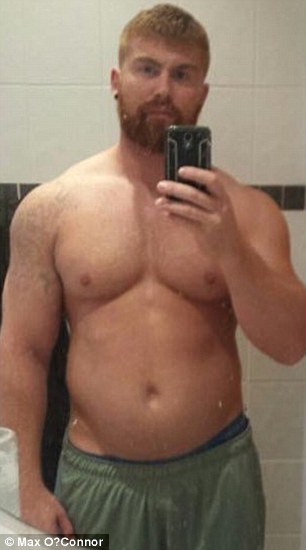 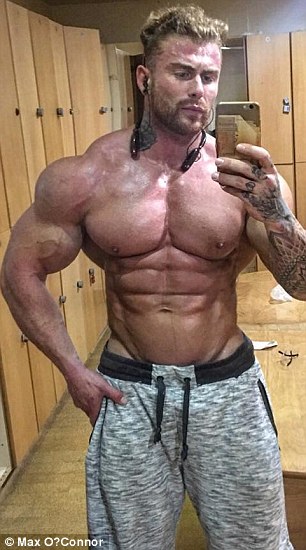 Max (pictured before left and after right) switched from playing rugby to bodybuilding in 2008 due to a series of sports related injuries. He was urged to compete as a professional bodybuilder by his mother

Before he began the resistance training regime, Max would eat three meals a day which consisted mainly of carbohydrates.

Now, he eats six meals every day, including dishes such as eggs on wholegrain bread, a large chicken and rice meal with vegetables, soaked oats and multiple protein shakes. His last meal of the day consists of white fish and white rice, totalling 5500 calories for the day.

Explaining how he has transformed his physique, he says: ‘I joined my local gym and part of the rehab was to strengthen my hamstring – I got into strength training that way. Initially, I trained for about six months and really enjoyed it. I saw my body change and the results came quickly.

‘Someone mentioned I should do a body-building show. I said there was no chance I was getting in sparkly pants and getting on stage ever. My mother kept going on and on at me and eventually it broke me.’

And once the personal trainer had rippled his pecs on stage once, he got a taste for it: ‘It was the biggest UK BFF qualifying event of the year for the UK’s BFF Championships. I rocked up thinking I was going to a normal regional show only to realise there was around 2,500 people in the audience. 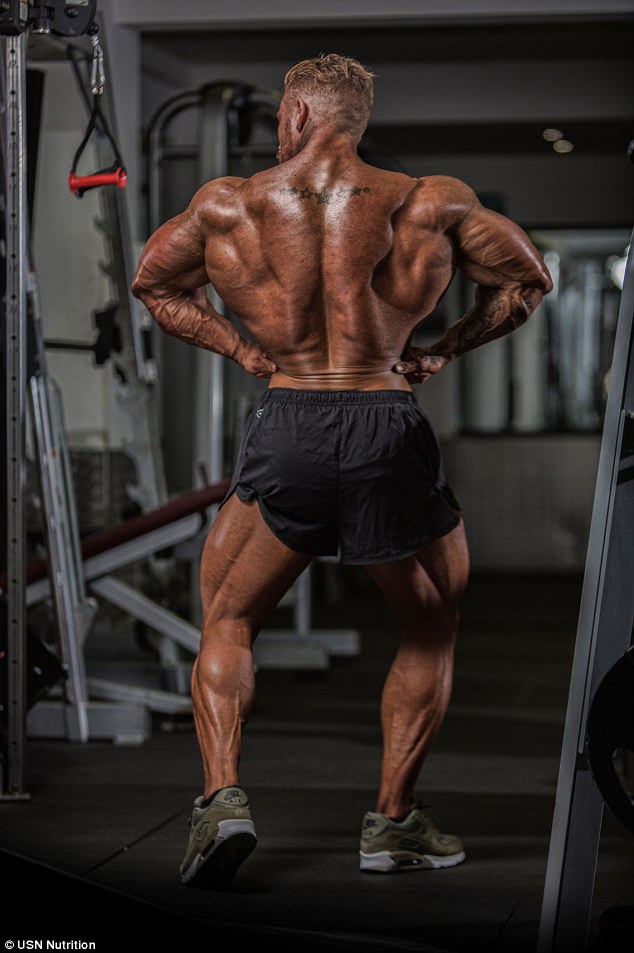 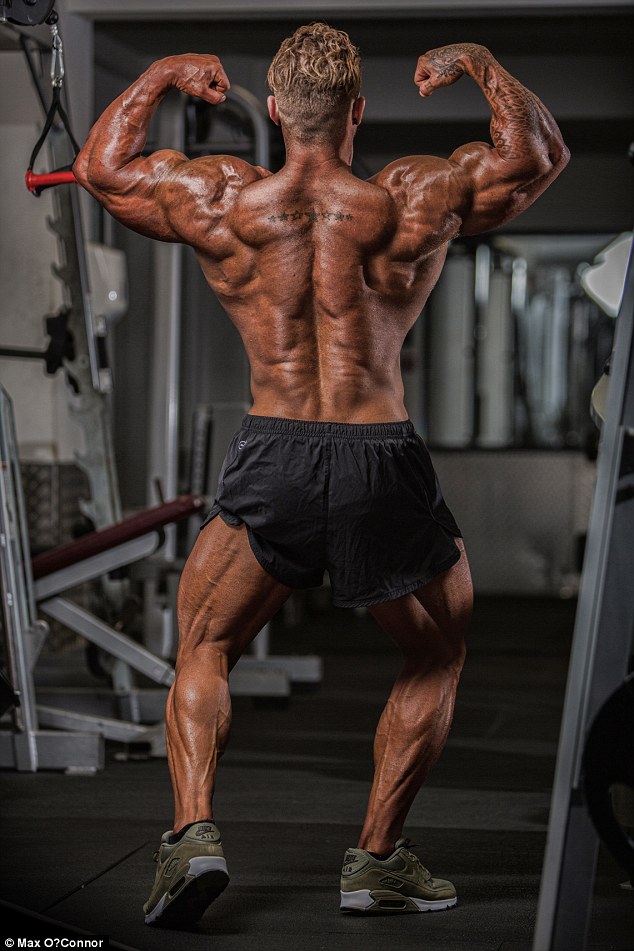 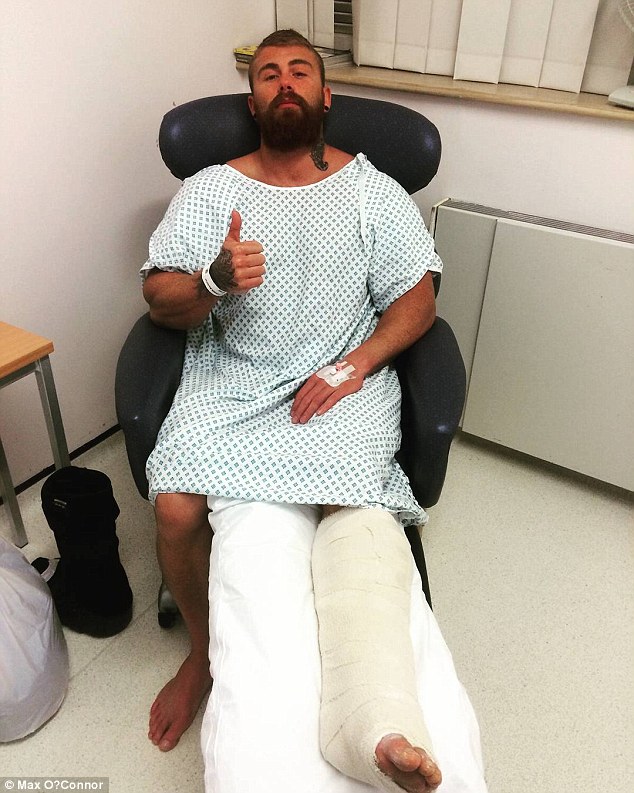 ‘I thought, I’ve bitten off more than I can chew here, but then ended up going through with it, did it and won! You get such a buzz from winning and – I was hooked from there!’

Speaking about how bodybuilding has changed his life, he says: ‘It gave me a new focus, a goal if you like – something to work towards. I would spend so much time in the gym trying to overcome my injury setbacks and it made it feel like it was worthless.

‘I found my niche and the work started to contribute to my bodybuilding goals. I already had quite a lot of self-motivation and discipline, but it was good to be able to use and channel it into bodybuilding.

‘Of course rugby was a big part of my life as my first, and probably still greatest, passion, but I got quite depressed and down by the inability for my body to allow me to end my career on my own terms. 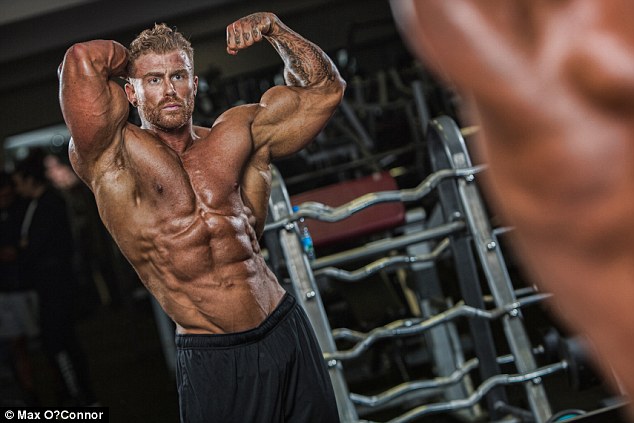 Max notes winning the NABBA Pro AM title at age 23 which only Arnold Schwarzenegger had won at that age and becoming a NABBA World Champion in 2015 as his biggest accomplishments in bodybuilding.

He has also been a runner-up in the international Mr Universe competition twice before – in 2012 and 2017.

Max has been transforming his body for the past ten years. He reveals how he has overhauled his diet and exercise regime ahead of competing in this year’s Mr Olympia.

‘I would you say that one of the hardest aspects of being a body builder sticking to the diet as a result. I know some of the boys I train with could eat all day every day just bland food and ramming it in, but for me I don’t have a great appetite.

‘With carb drinks it makes it a lot easier for us. I don’t have a massively big appetite and I think body builders in general struggle with appetite because your force-eating most of the time which you makes you feel uncomfortable and bloated. 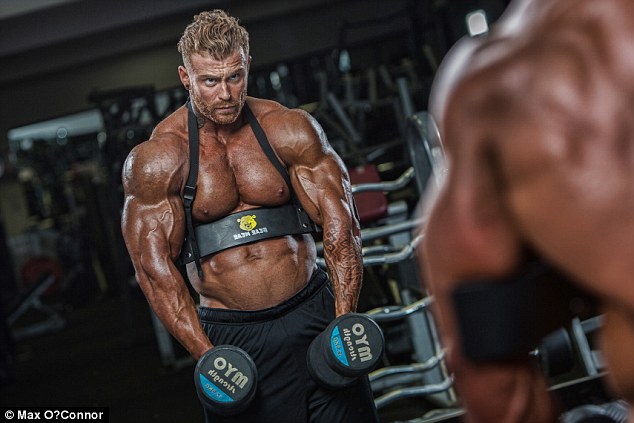 ‘So, I’ve gone down the supplement route with carb drinks and things like that which I found work well for me. At the start of my preparations I’d be consuming around 5500 calories a day but as I taper towards the show it would go down to around 3000 a day.’

‘I started in a bulking phase last year up until the end of July to try to put on as much tissue as possible. Since then, my preparation has been in full flow.

‘I train by myself most of the time because of my injuries – I have to train in a specific way so if I train with someone we normally end up ruining each other’s session – I just can’t do that if I want to achieve my ultimate goal.

Max claims he needs to achieve ‘more size everywhere’ and become a ‘bigger version’ in order to reach his main goal of winning Mr Universe.

After the Universe contest, he is considering downsizing to a fitness category for health reasons.

Speaking about the most difficult area of his body to train, Max says: ‘It would be my quads now because I’ve had double hip surgery, so squatting and leg pressing and things like that are pretty uncomfortable.

He advises others: ‘Just enjoy it and don’t focus on other people; focus on yourself and your progression. I believe it’s about the enjoying the journey.’